President Joe Biden with his quirks, like calling a Black adviser, “Boy” and randomly sniffing women’s hair, not surprisingly was blind to the potential danger to women when he negotiated with the Taliban to, in a de facto sense, giving these notorious terrorists, Afghanistan.

But this wasn’t a politically incorrect blunder, “it’s a disaster”, say the underground women’s resistance in central Afghanistan.

Friday, a group of Kabul, Afghanistan women demonstrated for gender equality in Kabul at government offices. They made tacit arguments for gender parity as the Taliban planned for a new government.

Taliban fighters attacked the watchers, say witnesses, driving them away,  “not the protestors”, thus diminishing the protest impact.

Fortunately, Kathy Gannon/AP wrote the story and Wali Sabawoon of Associated Press took good pictures and shared them with the world.

Women in Afghanistan are heading back to the 12th century if the Taliban get their way. 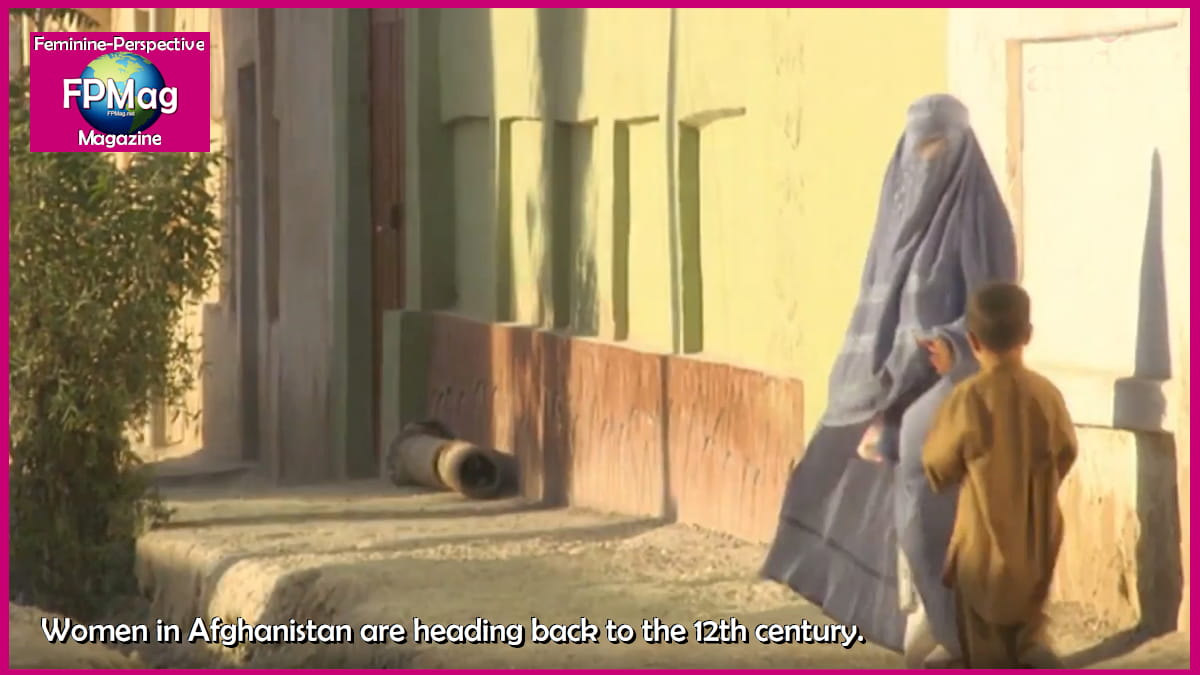 Women in Afghanistan are heading back to the 12th century if the Taliban get their way. But there is a move afoot to even use extra-legal means to obtain human rights for women. A growing women’s resistance movement recently helped arm women resistance and motivate intellectual response directed at the Taliban as they plan for building a government. “This is not going to be a smashing of women’s rights without consequences as was the case the first time the Taliban took over Afghanistan,” says an organizer who does not want to be identified for obvious security reasons. Image source supplied. Art/Cropping/Enhancement: Rosa Yamamoto FPMag

Mocking the Taliban, hundreds of armed women have defied the Taliban, in ‘armed demonstrations in central Afghanistan, and elsewhere here’, say resistance members familiar with the events but who were not authorized by resistance leaders to comment and requested anonymity.

On Friday it was discovered the women had been released by “associates”, according to one of the women members of the local resistance movement.

The male jailers had raped one of the women they ‘arrested’. These seeven men were found, bound and gagged, naked, rolling around on the floor of a small room in the ‘jail’, in their own feces, probably for more than a day, according to witnesses from Kandahar province who took photographs which they shared with FPMag.  The images are not suitable for publication. 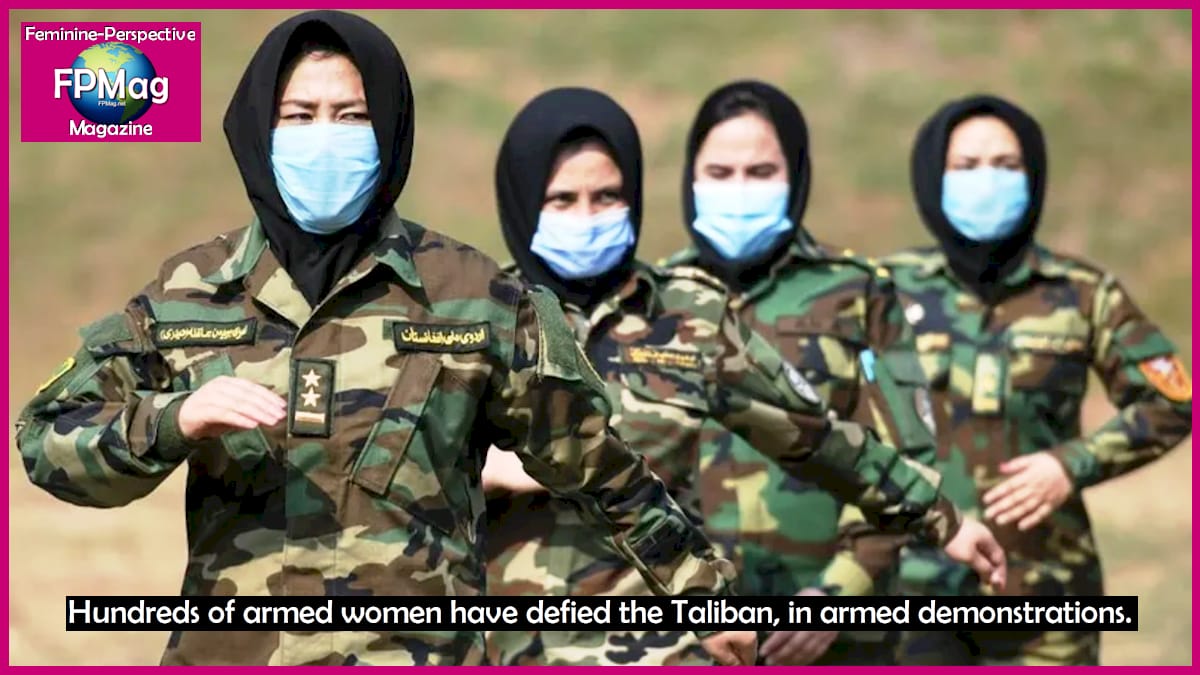 The Honourable Ms. Hosna Jalil, former Afghan Minister of Foreign Affairs, in interviews, says she believes that because the 12th century misogyny which denied women parity with men is the traditional Taliban misogyny they promised fighters in their recruitment programs, the Taliban promise of a more moderate Sharia Law is unlikely to happen. Taliban fighters expect male supremacy, and no need to compete with women for any job or need to listen to women in authoritative positions.

“We are concerned about the issues of human rights in Afghanistan, notably on the rights of women,” U.N. spokesperson Stephane Dujarric said Friday. “It is imperative that women have the right to work, to work in a safe environment, and those are some of the issues that have been brought to the attention of our interlocutors in Kabul and elsewhere.”

FPMag citizen correspondent Gracie Edwards, working in Kandahar, but visiting Kabul this week, was assailed by three men who noticed her using her smartphone, she says. The men were dispatched but in the process of a conversation with her female body guards, the women learned the men were looking for a woman judge who had sentenced each of these men to a prison sentence three years ago.

“Over the past five years there had been as many as 328 female judges at various levels including minor traffic offence jurists.  On 31 August when America fled Afghanistan, there were 248 women judges of various types. Many had not been reappointed by the recent government; and some had fled early in August,” Ms. Edwards explained on Friday. She says those women judges need to flee the country whether they want to go or not, otherwise they are going to be killed. That is what the Talibs told the women, she said.

“If the Americans and their friends can help President Ashraf Ghani  get out of the country with 170 million dollars and a free helicopter, they can surely help a couple hundred women judges come to America and start a new life. Otherwise, I promise you, these women jurists will be hunted down and slaughtered in the worst possible way. What those Talib told us they would do to the Judge they were looking for was hideous,” said Ms. Edwards in a Signal text dialogue. 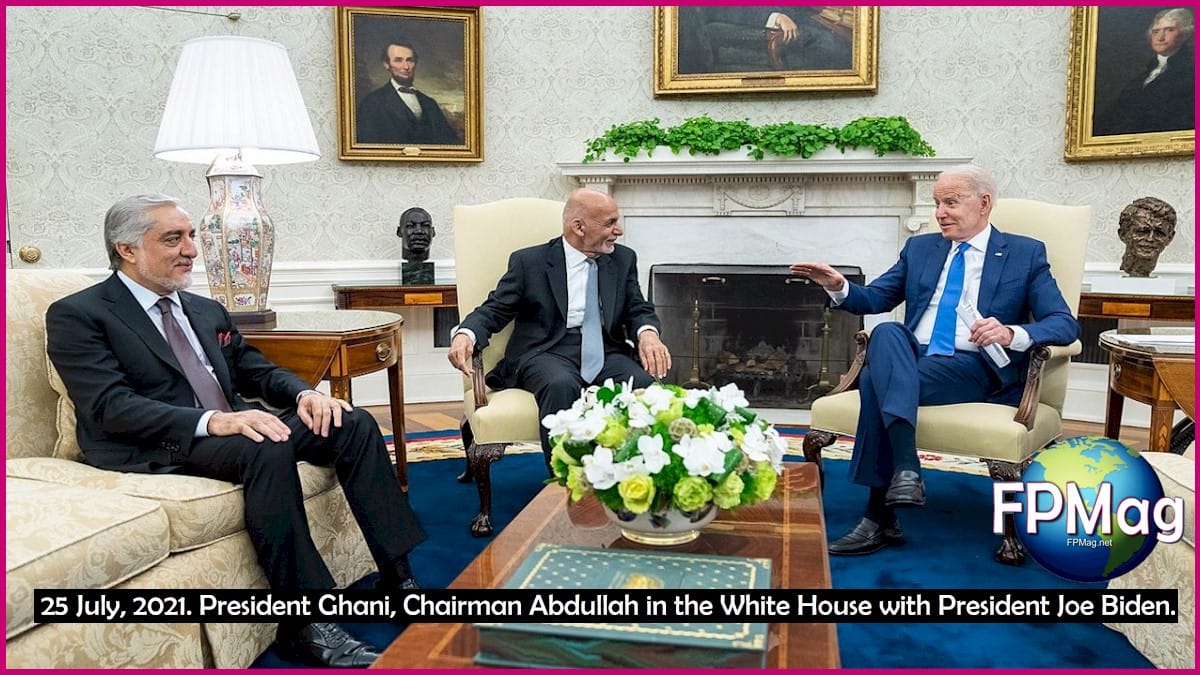 25 July 2021—White House photo accompanied by the statement, “It was an honor to welcome President Ghani and Chairman Abdullah to the White House this afternoon. We will continue to provide assistance through our enduring partnership with Afghanistan to promote a peaceful and stable future that the Afghan people want and deserve.” A few days after Ghani fled Kabul in an Afghan helicopter with $170 million US dollars in cash, according to Kabul sources. A warrant has been issued for his arrest, say Taliban officials.
Art/Cropping/Enhancement: Rosa Yamamoto FPMag

The Picture and its story: Afghan president Mohammad Ashraf Ghani Ahmadzai, who had been elected President in a controversial campaign on 20 September 2014, was re-elected five years later according to public records.

A few days after meeting Biden in Washington (above) Ghani fled Kabul in an Afghan helicopter with $170 million US dollars in cash, according to Kabul sources.

A Taliban warrant has been issued for Ghani’s arrest for allegedly stealing Afghanistan property and funds, say the Taliban.

The United Arab Emirates also confirmed Ghani was in Dubai and would be given asylum on humanitarian grounds, according to an Emirati release.

“Curiously, both Barrack Obama and Joe Biden in 2014 declared the war in Afghanistan was officially over and troop withdrawals then began. What we are looking at is a massive American mess,” he added. “I agree that the Americans must get those women judges out of Afghanistan, posthaste. General Mark Milley did a great job so far on the evacuations, making military history, so keep that going,” Mr. Baldock said.