Don't get in the car.

It’s a campaign phrase of a global women’s rights group which is warning women and girls of grave danger. It means women must avoid becoming vulnerable to violence. In most parts of the world, violence against women, including rape and incest, is of itself a raging pandemic. 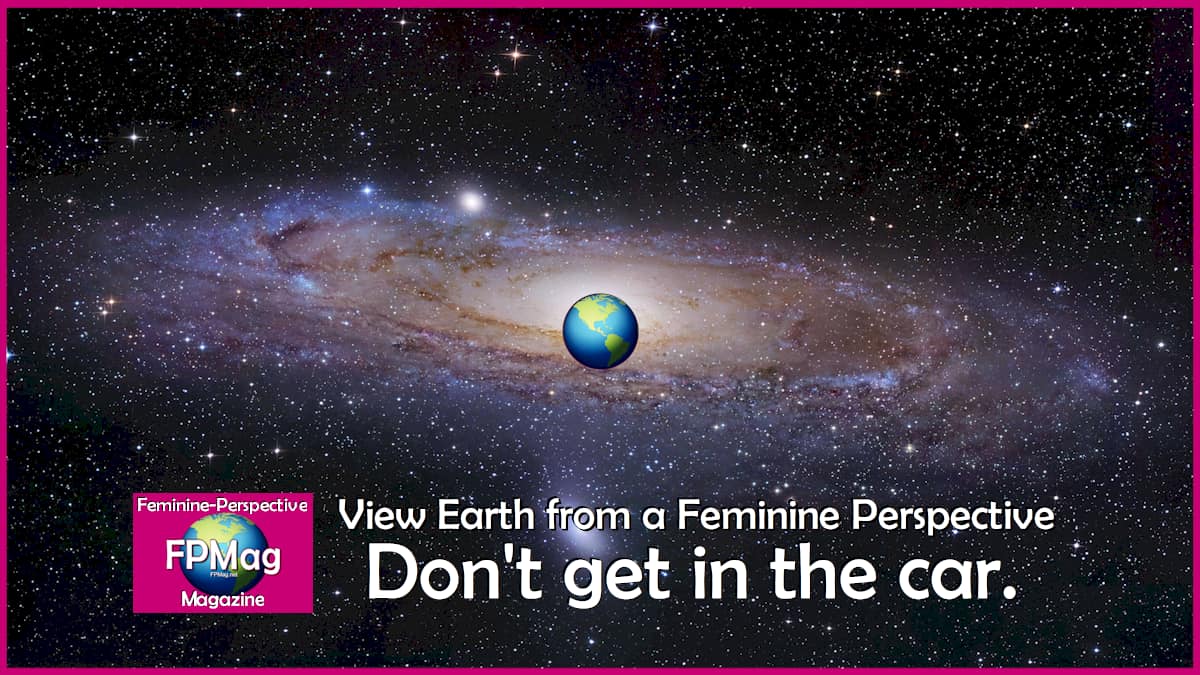 “Don’t get in the car” is a figurative expression meaning, if you are a woman, do not allow yourself to be put into a vulnerable state. Photo Credit: NASA. Art/Cropping/Enhancement: Rosa Yamamoto FPMag

More and more cases are in the news every day, but the ones the news media never hear about are far more common occurrences. Rape and incest crime during the pandemic is so common, it is not reported, say humanitarian workers.

Some cases in point are horrifying.

“It’s one thing to be brought a pregnant 11-year-old, but when a kid arrives in a bloody mess, comatose, the case is often beyond hope,” explained a trauma nurse in Iraq who was asked about her experiences in Duhok.

“As the days became weeks, the condition of one particular pretty girl-child worsened,” explained the doctor. “She has tested positive for at least three serious sexually transmitted diseases, and we are still contending with blunt trauma, broken ribs and internal injuries,” explained Dr. Nassima al Amouri working for The RINJ Foundation in Syria.

“The post pubescent child had been kidnapped and spent a week in captivity with six male jihadist fighters in Syria, near Aleppo.”

“The girl and her small brother were searching the fields for edible roots and other food. They were on their way home to their father and accepted a ride in an SUV from a very persistent group of males. The men grabbed the girl and left the little boy stranded on the road,” Dr. al Amouri explained to FPMag.

“Because of a recent spate of attacks on women and girls as the pandemic heads toward its third year and society decays further, we are asking women running our shelters to again start self-defence training for women and girls, explains Geraldine Frisque, a spokesperson for RINJ Women, a global women’s rights organization.

“The pandemic has frustrated the modus of many predators who have now become more daring. Some of these men are now very, very sick in their minds,” explained the doctor carefully.

One example is the case of Oliver Lee White, 33, who in the USA yesterday, was taken into custody as a mentally incompetent by the US Attorney General.

For years Mr. White repeatedly molested young girls, ranging from the ages of 2 to 13.

“Because Mr. White could not be criminally prosecuted due to his incompetency, the Government was required to prove in this civil proceeding he had committed acts of child molestation. The Government did so through the courageous, gut-wrenching testimony of his victims, who traveled across the country to face their abuser and his family members who concealed his conduct. Presenting such fragile testimony is no easy feat, and as such, I express my deep appreciation to the FBI agents, victim specialists, and forensic interview specialists in Montana for their tireless efforts in working with the victims.

In particular, FBI Victim Specialist Michele Stewart was invaluable. Without her exceptional rapport with the victims and personal involvement, including traveling with the victims to North Carolina to testify, they may not have found the courage to testify. The victims’ courageous testimony will help keep others safe from Mr. White.” Mr. Acker continued, “This case is a great example of how a true team effort can help make the communities within this District and across the country safer.”

According to an official release of the US Department of Justice, “The United States Attorney’s Office for the Eastern District of North Carolina litigates all Adam Walsh Act cases for the entire country.  All sexually dangerous persons who are committed to federal custody are housed in a federal facility in that district, where intensive, residential treatment is offered to them.”

Women respond to a lurking danger to other women and children, of  increasing sexual violence during the virus pandemic.

“Our programme focusses on avoiding vulnerability. No matter where you are, always have a predetermined alternate plan of action. An example of avoiding vulnerability is carrying a personal water supply and a small snack. We don’t want girls hungry and thirsty after missing a bus or a ride, walking for hours and ‘getting in the car’ when a ride is offered because they are hungry, worn, and sleepy. Never get in the car. If it’s your mother in the driver’s seat, make sure there is no bad actor in the back seat with a gun pointed at her head. And don’t grimace at that because we have seen this happen too often,” explained Ms. Frisque.

“They kidnap a girl or a woman and force her to take them to women or children in their circle of life. It’s about collecting women for their sex slave rings.”

“Currently we have a trial programme running for teaching women and girls how to avoid being made vulnerable to ransom ware attacks or losing their identity to cyber criminals. Predators abound on the internet. Very often predators are seeking  information whereby they can evaluate targets for enticing into or kidnapping for human slavery operations or attacks of a more immediate and acutely dangerous nature.

In the year 2000, the global community adopted the UN Convention against Transnational Organized Crime and the Protocol to Prevent, Suppress and Punish Trafficking in Persons, especially Women and Children.

This definces the crime this way. “Trafficking in persons” shall mean the recruitment, transportation, transfer, harbouring or receipt of persons, by means of the threat or use of force or other forms of coercion, of abduction, of fraud, of deception, of the abuse of power or of a position of vulnerability or of the giving or receiving of payments or benefits to achieve the consent of a person having control over another person, for the purpose of exploitation. Exploitation shall include, at a minimum, the exploitation of the prostitution of others or other forms of sexual exploitation, forced labour or services, slavery or practices similar to slavery, servitude or the removal of organs.

Think about it, says Katie Alsop, a founding director of The RINJ Foundation. And don’t get in the car.

Since 2000, over 125 nations have ratified the protocol, and many of these have adopted legal instruments to help them in the fight against trafficking.

Those nations are compelled to follow the rules of Article 6 of the act.

Assistance to and protection of victims of trafficking in persons

1. In appropriate cases and to the extent possible under its domestic law, each State Party shall protect the privacy and identity of victims of trafficking in persons, including, inter alia, by making legal proceedings relating to such trafficking confidential.

Note: The sad part of this is that victims exist in a shroud of secrecy. Otherwise this crime would be seen as so prevalent, not a day would pass that someone is publicly screaming for action.

2. Each State Party shall ensure that its domestic legal or administrative system contains measures that provide to victims of trafficking in persons, in appropriate cases:

(a) Information on relevant court and administrative proceedings;

(b) Assistance to enable their views and concerns to be presented and considered at appropriate stages of criminal proceedings against offenders, in a manner not prejudicial to the rights of the defence.

3. Each State Party shall consider implementing measures to provide for the physical, psychological and social recovery of victims of trafficking in persons, including, in appropriate cases, in cooperation with non-governmental organizations, other relevant organizations and other elements of civil society, and, in particular, the provision of:

(b) Counselling and information, in particular as regards their legal rights, in a language that the victims of trafficking in persons can understand;

4. Each State Party shall take into account, in applying the provisions of this article, the age, gender and special needs of victims of trafficking in persons, in particular the special needs of children, including appropriate housing, education and care.

5. Each State Party shall endeavour to provide for the physical safety of victims of trafficking in persons while they are within its territory. 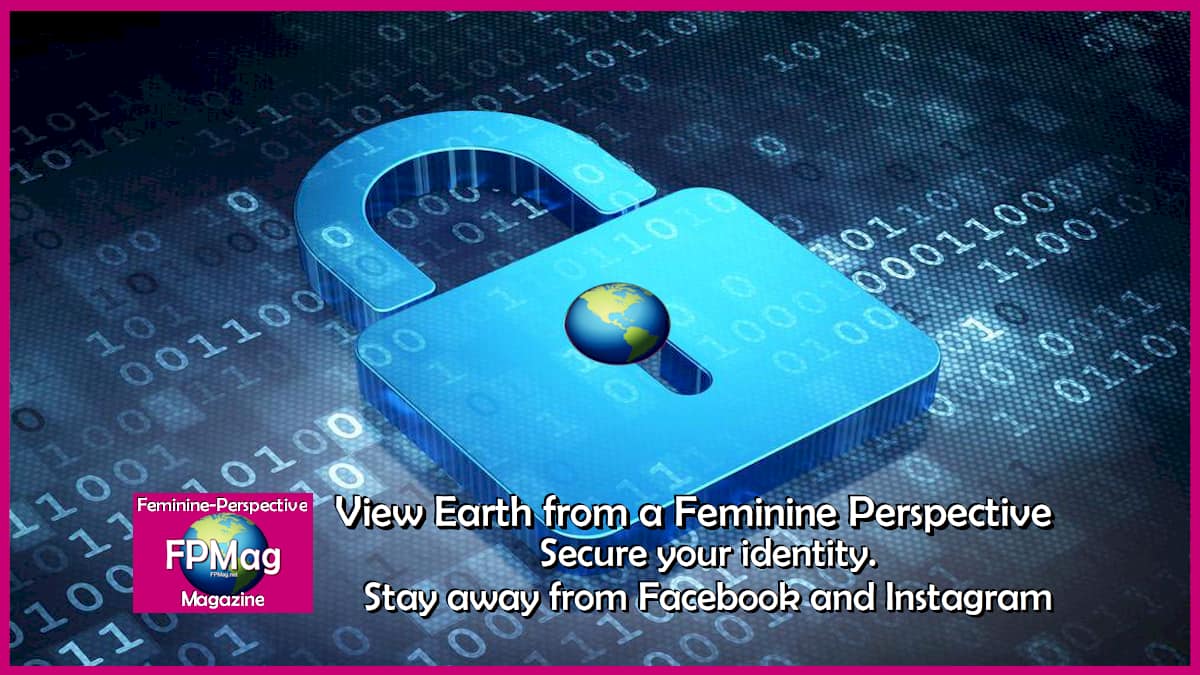 “Protecting one’s personal information in cyber space is extremely important. Under no circumstances shoulw a woman or girl give their personal informatin to social media or any entityu online,” say security experts.
Art/Cropping/Enhancement: Rosa Yamamoto FPMag

Read if you wish, “Why women and children should flee Facebook“, and “Expose & End Child Sex Slavery. It is Rape.” 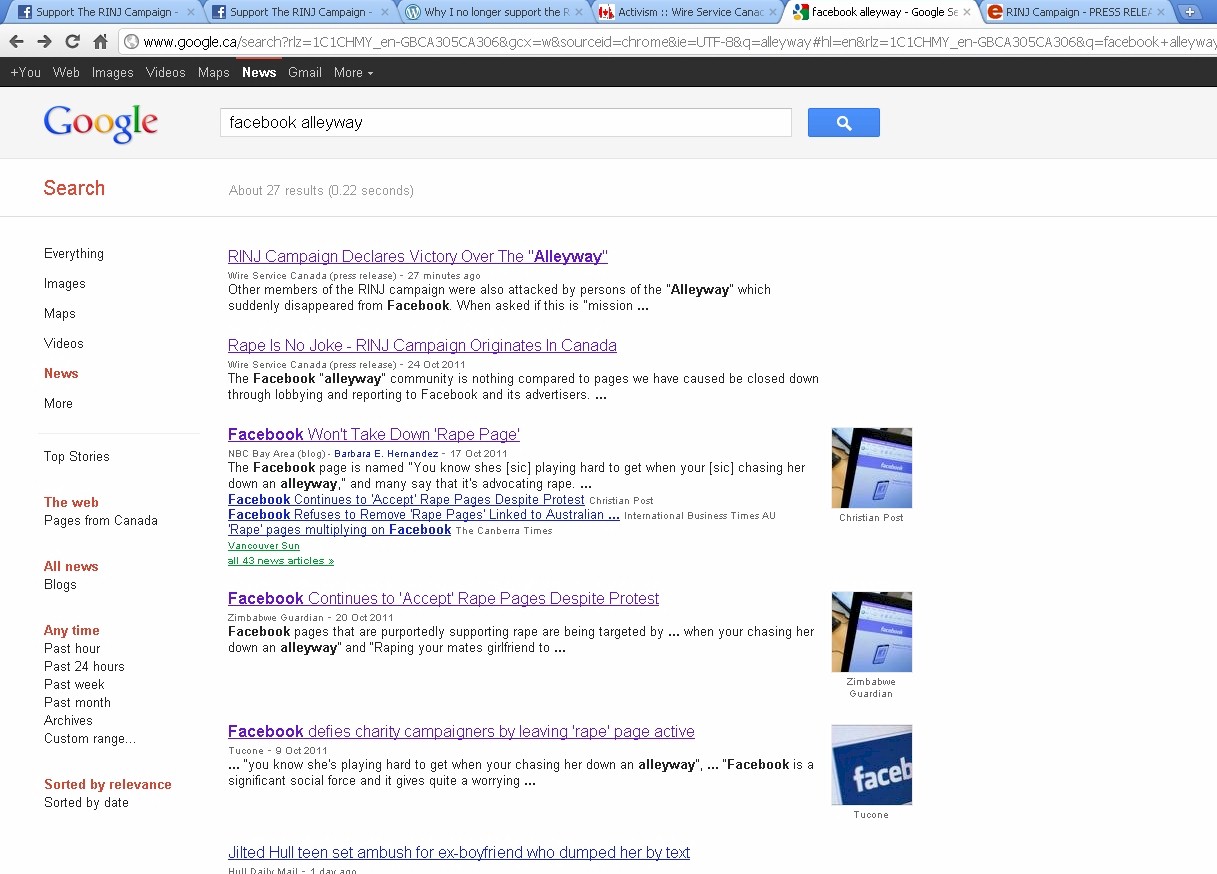 Ten years ago the fight to get child sex slavery recruitment off Facebook was met with global disdain because this is a business Facebook makes plenty of money from.

RINJ Women‘s Geraldine Frisque explains that a campaign will be launched this winter by her organization aimed at building awareness.

“Don’t Get In The Car is a catch phrase to remind women and girls to avoid allowing themselves to fall into a vulnerable position and in some regions, to encourage more women to take our free course,” she explained. 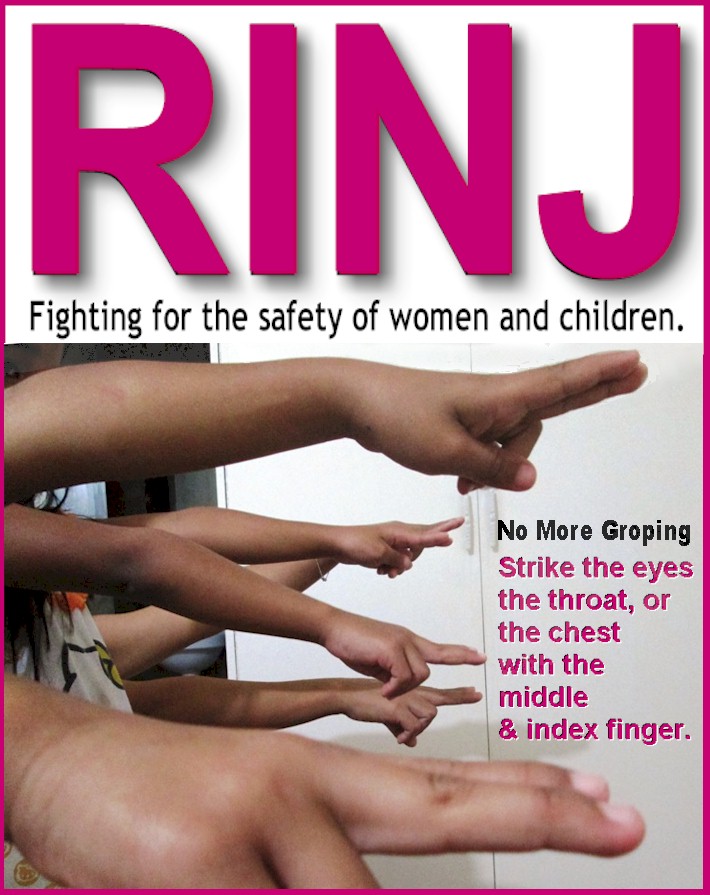 A poster seen in RINJ Shelters. “In this class, children and young women are taught to flee from potentially vulnerable situations, but also learn what to do if they are being grabbed or kidnapped.
“Strike the eyes, the throat or the celiac plexus region of the chest of the attacker. Step into it and follow through with another step staring into a run. Surge past the attacker and don’t stop; and don’t look back. Think in your mind that you may not survive a kidnapping so don’t let it happen. ‘Run.  Go!’,” explains a young woman safety instructor. Young girls at a women’s shelter are taught martial arts techniques for breaking free from a groping  attacker or kidnapper thus preventing an inevitable rape and even death. “Girls must break free and run for safety,” explains a RINJ counselor. “Children on the run attract attention of authorities and can often escape their attacker if they are trained in the techniques,” she added. “In most parts of the world, this is a life or death situation. Violence against women including rape and incest is of itself a pandemic.”
Photo Credit: Michele Francis. Courtesy of the RINJ Women.

Additional reading on why it is necessary to: “Forcibly Resist Gropers. “