The  Trudeau government, despite being criticized for hedging its stock of vaccines has put the jabs to good use and saved thousands of lives, say a hundred in-the-trenches frontliners.

Compared to its USA neighbour which “wallows in COVID-19 disease, fighting amongst each other whether to wear a mask or not, or take a jab or not, the Trudeau government has obviously saved thousands of Canadian lives,” said an epidemiologist supported in agreement by nearly 100 medical specialists who participated in a civil society digital teleconference on the weekend.

“But Canada needs to bump up its vaccinations to 95% before it is ‘over the hump’, and that means inoculating small children,” says infectious disease researcher.

“The last little bit going from 77.4% toward 95% is the hardest. We have seen that with polio, smallpox, measles, mumps, diphtheria and more, so people must push their friends, family and neighbours to get vaccinated.” explains Kathy Poon, a bio-medical researcher in Singapore.

The good news for Canada must be that BioNTech’s, Chief Scientist, Dr. Oezlem Tuereci (53), has signaled a probable “GO” for the BioNTech’s vaccine for small children, reported a German nurse practitioner during the conference. This sparked a conversation about the founders of BioNTech.

BioNTech has announced that tests have been successful on the 5-to-11 group of children and a dosing regimen has been established successfully. The BioNTech vaccine is already approved for children over 12.

Dr. Oezlem Tuereci  is the actual creator of the BNT162b2 vaccine, with her scientist husband, Dr. Uğur Şahin. She is the chief medical scientist of the Mainz, Germany BioNTech medical science giant.

“Despite the hoopla in the United States, this is not a Pfizer and not an American vaccine, it is a BioNTech Germany vaccine, or better still, a “Tuereci/Şahin ” vaccine, if I may be so bold,” explained Dr. Nassima al Amouri of the RINJ Foundation who says she has worked with the BioNTech group (NASDAQ: bntx BNTX) and “they are extraordinary medical geniuses who develop active immunotherapies for patient-specific approaches to the treatment of disease, and now they will be helping us with small children who can soon return to a somewhat normal and safe life,” Dr. al Amouri added.

“More details about the BioNTech relationship with the snotty bunch of male chauvinists at Pfizer will soon be revealed, probably hours from now,  in a new book, The Vaccine,” said Dr. Nassima al Amouri

More proof that it is women like Dr. Oezlem Tuereci, Chancellor Angela Merkel, Jacinda Ardern,  Tsai Ing-wen, who are saving the world from COVID-19. 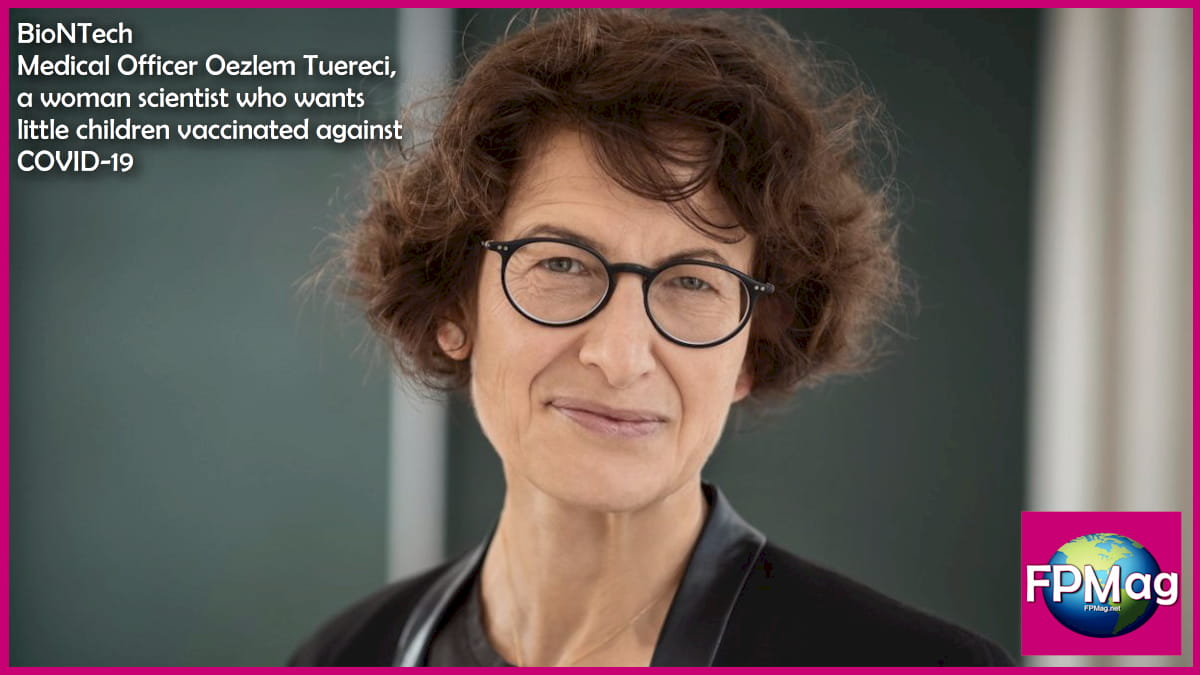 Dr. Oezlem Tuereci’s ideas are just what the doctor ordered for getting Canada over the COVID-19 Vaccine hump for a 95% Vaccinated Success Story.

The BNT162b2 vaccine is  approved in Canada. Canadian federal officials will soon receive data from BioNTech’s tests supporting a special dose of the vaccine for small children, according to the company. Germany and other countries in Europe are expected to get after the child dosing data in the very near future, but timing is sheer speculation at this point say company officials who did not wish to be named in this exciting development still in its early stages of official evaluations.

Dr. Oezlem Tuereci and her husband worked over twenty years in the development of MRNA technology and began the process of developing the now famous vaccine as soon as they heard of the outbreak in the Hubei province of China where three cities were infected in 2019.

“She and her husband founded BioNTech in 2008 with Austrian oncologist Christoph Huber, who still sits on the supervisory board. With BioNTech, which has currently some 1,300 employees, the couple first set to develop immunotherapy cancer treatments, using genetic material called mRNA to train the human body to produce its own antigene,” according to writer Philip Oltermann in Berlin who wrote an excellent report for The Guardian in November 2020.

Clear signs have emerged in the past two weeks that Canada is getting its fourth COVID-19 wave under control. This is emerging despite a staccato history of tardy reporting from the individual regions and shutting down for all weekends including long weekends for obvious political reasons—the country is in the midst of a federal election.

Late reports from the North West Territories (NWT) and British Columbia show the NWT as Canada’s hotspot, an unanticipated and unlikely development.

“Could someone please ship a case or two of N95 masks for distribution to the North West Territories,” quipped Fred Harris, a biostatistician and infectious disease researcher with the Civil Society Partners against COVID-19 in Singapore.

“This is frustrating, he added. And makes us think that the virus is trying to tell us something. But Prince Edward Island also had a small surge—and we are talking very small numbers in total but an alarming change because this is preventable,” he added.

Note: Above is region/county Health Unit reports for 15 September from health units in each province.

“The Impact of the Canadian Federal Government vaccinating some 77.4% of all Canadians over 12 years of age is significant and has saved thousands of lives,” says expert biostatistician.

“Not enough can be said about how sharply Ottawa has slammed this virus down across Canada,” explains Dr. Harris. 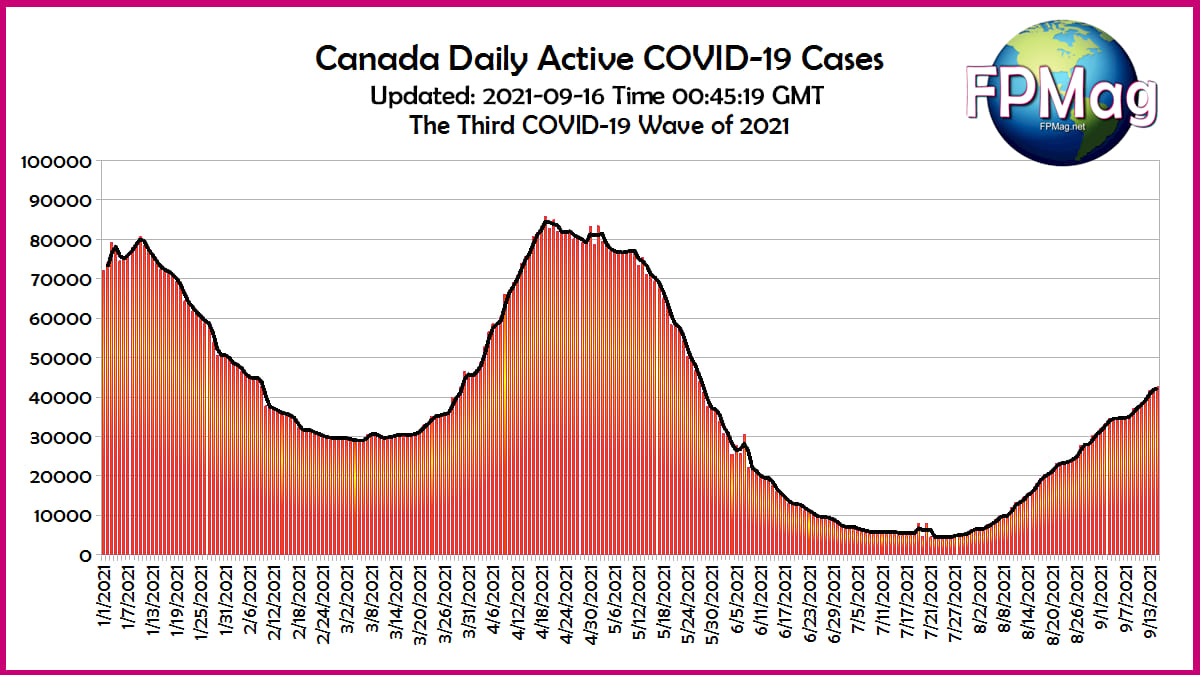 Despite the highly infectious Delta variant which has nearly brought America to its knees, Canada has given the virus a smashing that has brought the death rate down substantially and flattened what could have been a disastrous surge, as has been the case around the world.

“From the end of July to the mid September point, Canada has experienced a surge from 6,451 active cases on 31 July to 42,181 by this morning,” explained Dr. Harris.

“But in the meantime, the daily increases have dropped substantially. The Canadian government shows that latter number to be 41,964, a small difference, but the Ontario government underreports its data, which Ottawa repeats, and Ottawa is about 8 hours behind in collecting its data from what we have reported of the late filings. The latter is a normal phenomena around the world. Ontario fudging numbers is reprehensible and abnormal,” explained Harris.

Read if you wish:  Ontario, Canada continues to understate COVID-19 data which is to understate the case for vaccination. Get vaccinated say Doctors. 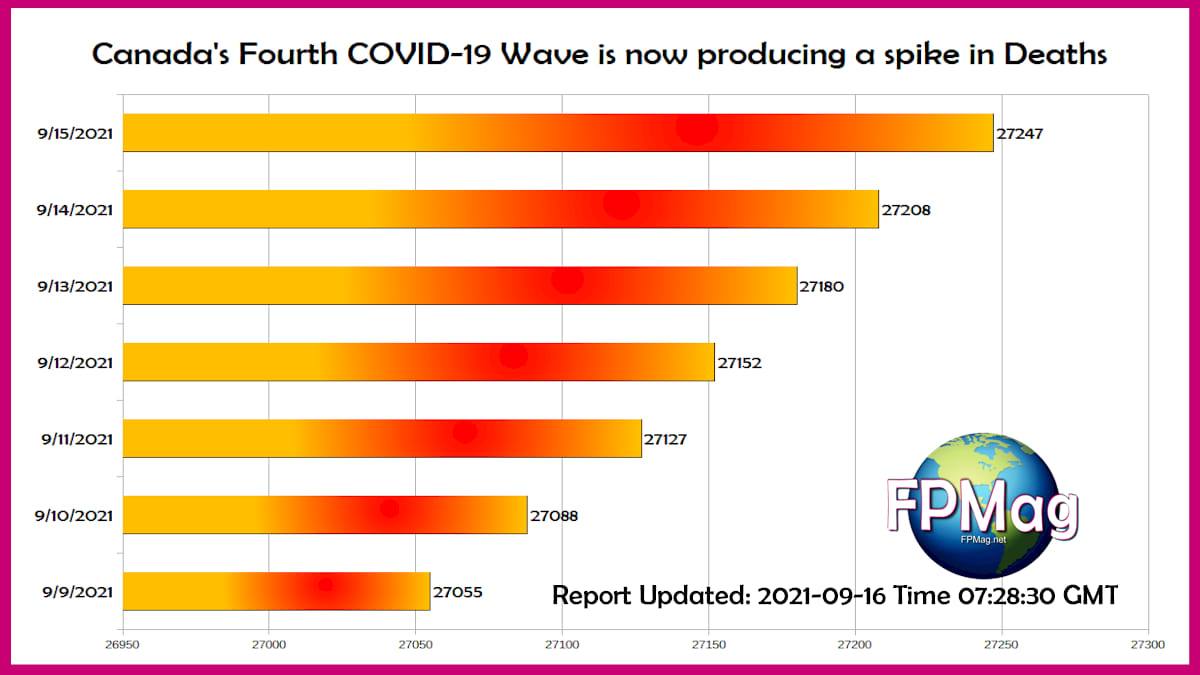 Canada’s fourth wave is now producing a spike in deaths, averaging 27 deaths per day in the past seven days. Source: Civil Society Partners against COVID-19

Canada’s Fourth COVID-19 Wave is a tamer version of previous surges because 77.49% of Canadians over the age of 12 have been fully vaccinated according to government statistics. More than 84% of the same group have received at least one dose. Source: Civil Society Partners against COVID-19