The danger in Taiwan vs China is inexperience and Biden gafs. [In-depth analysis] 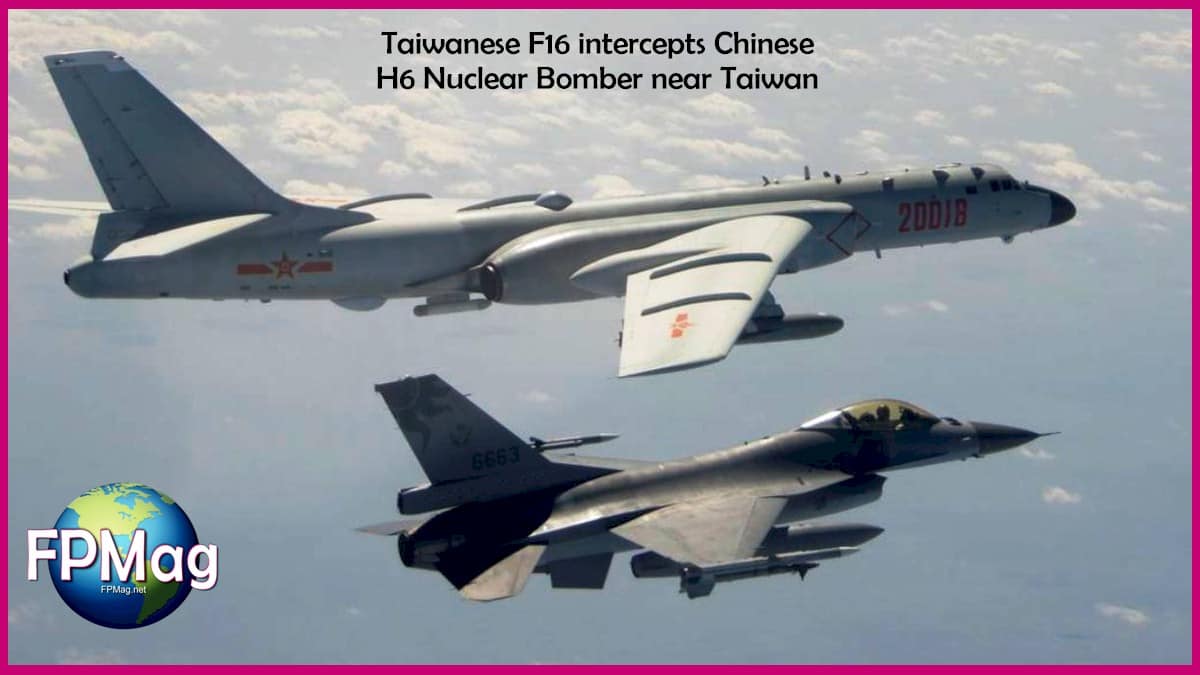 The US alliance with Taiwan has been managed by some of the brightest American Secretaries of State, including Condoleezza Rice (left), Henry Alfred Kissinger KCMG (98), current Secretary of State, Antony J. Blinken and the extraordinary James Addison Baker III (91),  61st secretary of state from January 1989 through August 1992, who as Secretary and as a prior White House Chief of Staff and on President Ronald Reagan’s National Security Council, helped President Reagan stick-handle the end of the Soviet Union and the end of the Cold War.

Now the former Senator Joe Biden as US President wants a new Cold War with China as the imagined enemy. But China has never thrown a punch against anyone. 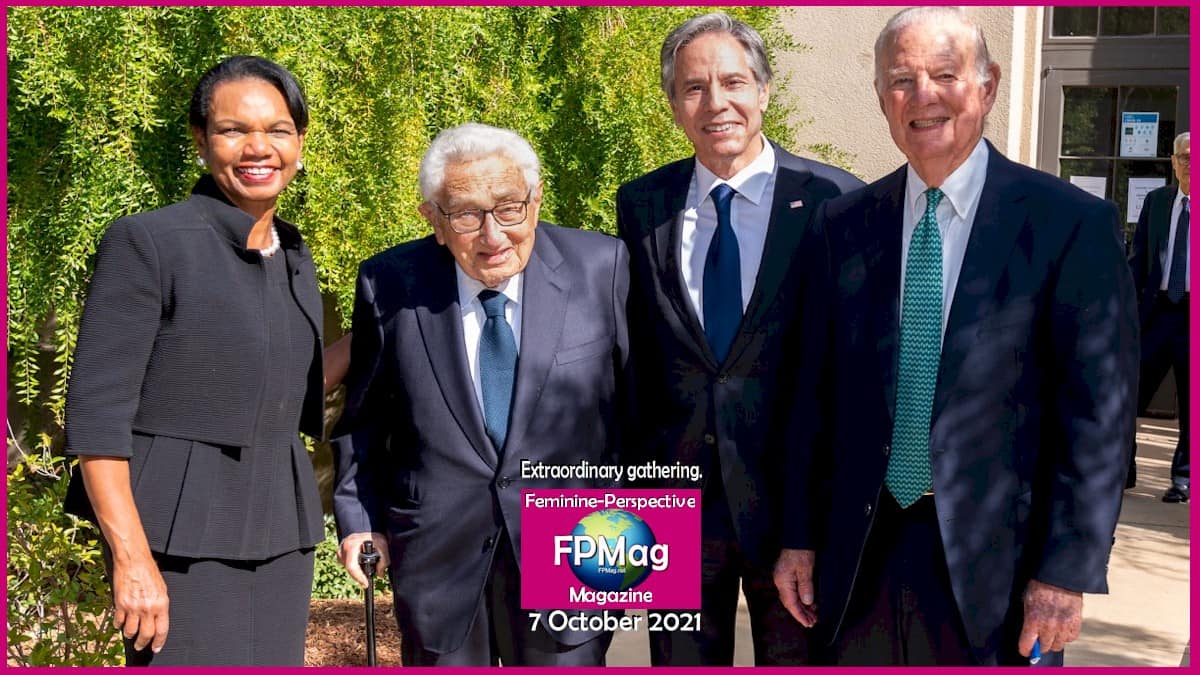 Each of these Secretaries of State has needed to deal with American meddling in the affairs of Taiwan versus China. In all this time the problem are unresolved and the tensions that have been created by American foreign policy seem likely to blow up the region. Secretary of State Antony J. Blinken attends a reception hosted by former Secretary of State Condoleezza Rice, also pictured alongside former Secretaries of State Henry Kissinger and James Baker, in Stanford, California, on 7 October, 2021. State Department photo by Ron Przysucha / cropped.  Art/Cropping/Enhancement: Rosa Yamamoto FPMag

As America interferes more and more in Taiwan, even to the point of installing a US military presence in Taiwan, regional war between China and Taiwan seems likely for as long as Xi Jinping sticks to his oxymoronic obsession for “reunification of Taiwan and China“. The two nations are the epitome of ‘Authoritarianism vs Democracy’ and like oil and water have never been united.

Secretary Blinken sees Joe Biden and the United States between those two sides, two significant military forces in Asia, one side that America armed despite its agreement in 1979 with China not to do such a thing.  Moreover this is a situation that America typically loses. It’s only benefits are for the billionaires who make money selling weapons to the unbriefed American taxpayers who don’t have a clue about what is really happening.

“Neither should seek hegemony in the Asia-Pacific region or in any other region of the world and each is opposed to efforts by any other country or group of countries to establish such hegemony.” Citing: U.S.-PRC Joint Communique (1979)

But not only America will lose. A failure in this mess will be a calamity for the Philippines; a disaster for Japan; and very uncomfortable for South Korea; or maybe the end of South Korea as it is today, depending on the role the DPRK plays.

The status of nuclear armed North Korea would be elevated in an alliance with China which is likely. That if anything will just enhance the twitchiness of the field of play before, during and after the fall of Taiwan, which would fall.

Evidence indicates Donald Trump and Michael Pompeo exacerbated this mess for Biden. For example it can be safely said that the United States is building military strength in Taiwan, and that began with Trump, and would be immediately engaged in any fracas that breaks out, on the losing end in a big hurry.

In the longer term, like after four days post-invasion, America would need to decide if it wanted to launch an all out war with China.

America and its allies going to war with China, and its allies, would be World War III. It’s a decision that would bring devastation to American cities without any doubt whatsoever.

That’s what these men are playing with. 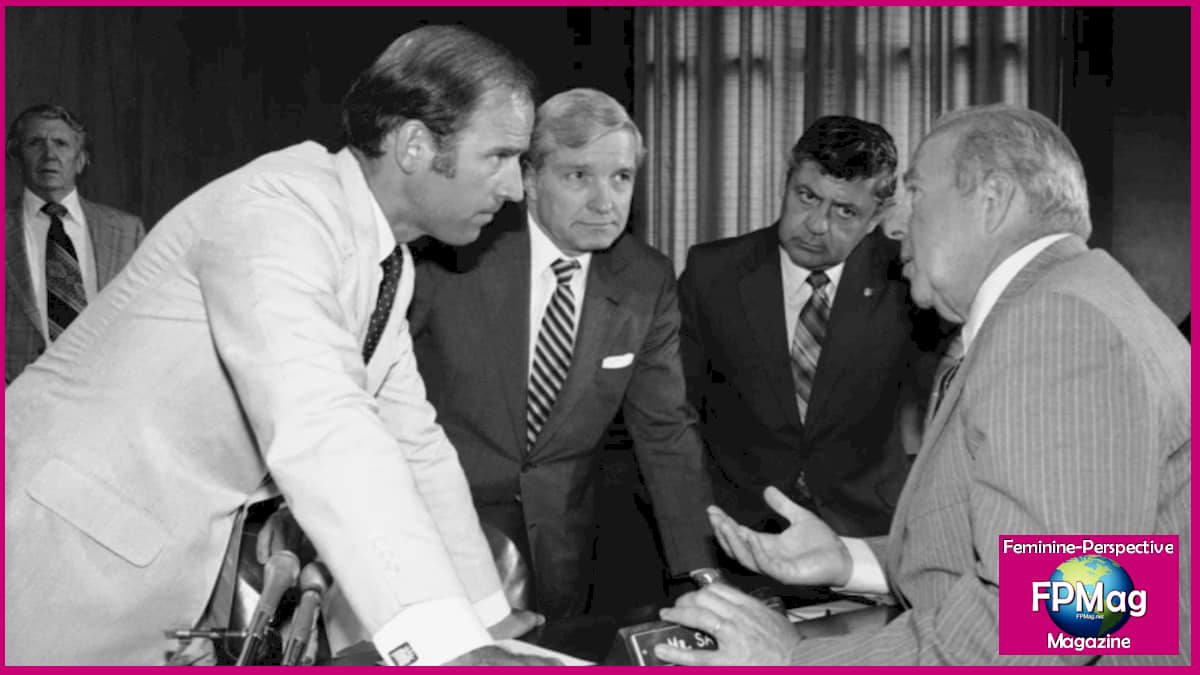 Dangers past ignored. 37-year-old US memo on arms sales to Taiwan ‘totally wrong and invalid’  said Ma Xiaoguang, spokesperson for the Taiwan Affairs Office in 2019.
A US memo on arms sales to Taiwan “is totally wrong and invalid”, the State Council’s Taiwan Affairs Office said. On Aug 30, 2019, the United States declassified a 1982 memo that US president Ronald Reagan sent to his secretary of state, George P. Shultz, and secretary of defense, Caspar Weinberger, after Beijing and Washington reached agreement on the Aug 17 Communiqué on US arms sales to Taiwan that year. The document said Taiwan’s defensive capability relative to that of the Chinese mainland would be maintained in both quantitative and qualitative terms. Taiwan Affairs Office spokesman Ma Xiaoguang said the memo’s contents were in severe violation of the one-China principle, the provisions of three Sino-US Joint Communiqués and the basic norms governing international relations. “It is totally wrong and invalid,” he said. Peaceful development of cross-Straits relations is the key to peace and stability across the Taiwan Straits, he said. US arms sales to Taiwan would only “fuel” the arrogance of the “Taiwan independence” separatist forces and further undermine peace and stability across the straits. Ma stressed that the peaceful development of cross-Straits relations is the common aspiration of compatriots on both sides. “We are ready to do our utmost and strive with utmost sincerity for the prospect of peaceful reunification of the country,” he said. “At the same time, we are unshakable in our determination to safeguard China’s sovereignty and territorial integrity.  “China must and will be unified. This historical trend is unstoppable by anyone and any force. citing China Daily. Photo Credit of Biden and George P. Shultz image is from the Public Domain Archive files/Cropped. Art/Cropping/Enhancement: Rosa Yamamoto FPMag

“We are unshakable in our determination to safeguard China’s sovereignty and territorial integrity.  China must and will be unified. This historical trend is unstoppable by anyone and any force.”

While this is pure madness, since the two nations were never united, and different like night and day, it is and has been China’s Communist Party’s promise to itself and the country. Today Xi Jinping is as stuck to this philosophy as much as the Flat Earth Society maintains the belief that Earth is not round.

Today Taiwan conducts a military show-and-tell parade to send a message to China that it will not fall quietly to the antagonistic pressure from China. This follows an eventful week in which China has tried to pre-empt Taiwan’s “National Day” and its celebrations and parades by slinging scores of fighter aircraft and bombers at the small island nation about a hundred and sixty  kilometers or less from The Philippines and some 2,000 kilometers from Japan.

Neither China nor Taiwan field military fighters with experience in war fighting, and they are twitchy.

US Secretary of State Blinken worries on that point.

Twitchiness? It was clearly the worry of FPMag sources in November of 2020 through 27 January 2021 that China as well as foreign affairs and political science students and professors were holding their breath on many occasions that looked like Donald Trump, would launch a nuclear attack against China or its ally, the DPRK.

Let’s be honest. Trump is characterized by most briefers to the high and mighty, as a few bricks short of a full load. But after his being electorally massacred in the November 2020 poll, he was and still is an exacerbated narcissist and probable psychopath, or in the alternative, at least an antisocial personality disordered person who is plainly dangerous.

One might argue that because the United States has been training the Taiwanese fighters, that should give Taiwan an edge.

But the opposite is true. America spent twenty years and countless billions of dollars training the Afghan military. A similar effort between 2003 and 2014 in Iraq had similar  outcomes.

Today Iran in a de facto sense controls Iraq passive-aggressively and the Taliban with al Qaeda completely own Afghanistan.

“And I would say, you know, for the greater U.S. government — consistent arms sales to Taiwan to help in this deterrence strategy is critically important. And again, that takes a balance to capabilities to go to them,” he added.

According to DefenceNews, Davidson’s comments come amid a tour of Washington, “to make the case for funding the Pacific Deterrence Initiative, for which his command is seeking $4.6 billion in fiscal 2022, and $27 billion through 2027, to build up capabilities in the command’s area of responsibility. Part of that funding involves reinforcing ties between the U.S. and its partners and allies in the Asia-Pacific region.”

Historians are cockily yet correctly Cynical about the Outlook for Nations Militarily Trained by America.

Just as the American trained Iraq army ‘ran for dear life’ when ISIS entered Mosul in the summer of 2014, and other parts of Nineveh province in Iraq in the same year, the Afghan army fled from the Taliban in August 2021 and handed over the nation to terrorists scuttling twenty years, countless lives lost, and maybe a trillion or more dollars to the trash heap and a pile of assets left for the Taliban which now has an American-bought military equipped with at least some of the latest and greatest hardware.

The American record for helping nations with their war-fighting suggests Taiwan will fall any day.

FPMag sources in China suggest that Xi Jinping is willing to patiently wait. That does not rule out a serious miscalculation by young men operating city-termination weapons from making a miscalculation of the other’s intent. Neither side have war-fighting experience. All reports suggest the two sides are twitchy in any current engagement.

Meanwhile, Xi Jinping originally planned to wait out the American involvement in Taiwan with US land, US naval and US air elements growing in Taiwan under the ruse of “training”.

These two vessels under build status by Hudong-Zhonghua Shipbuilding are what China needs to do a massive, fast landing in Taiwan. Enough of these amphibious assault vessels will not be available for two years at best. 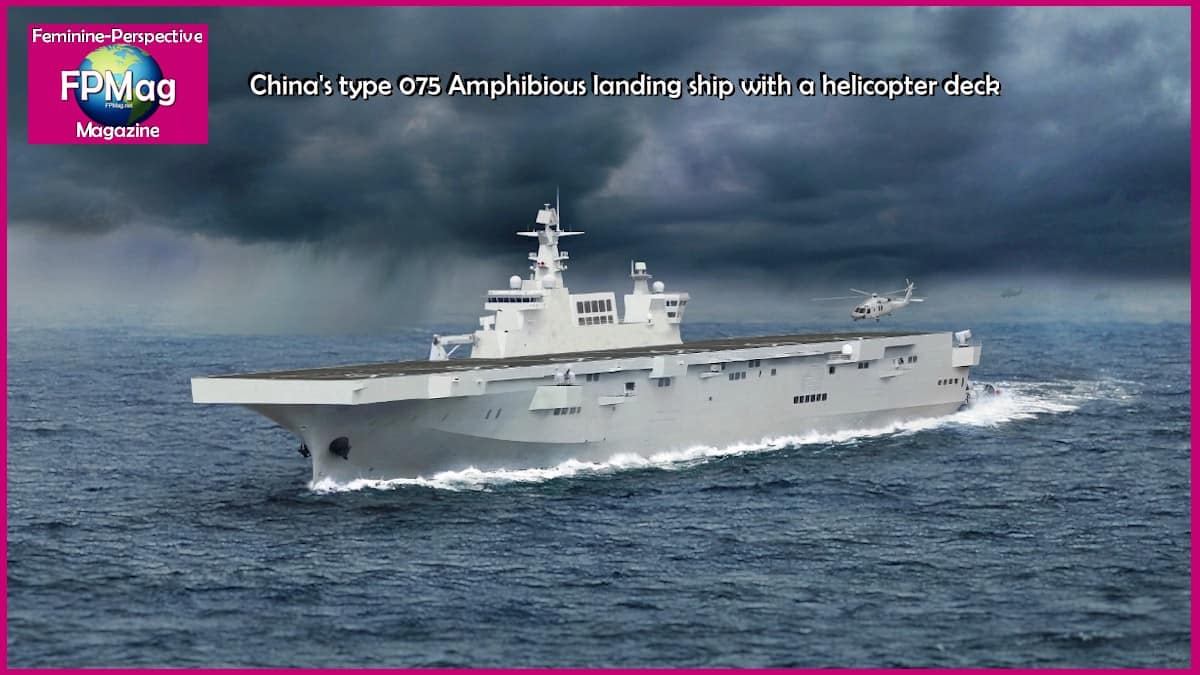 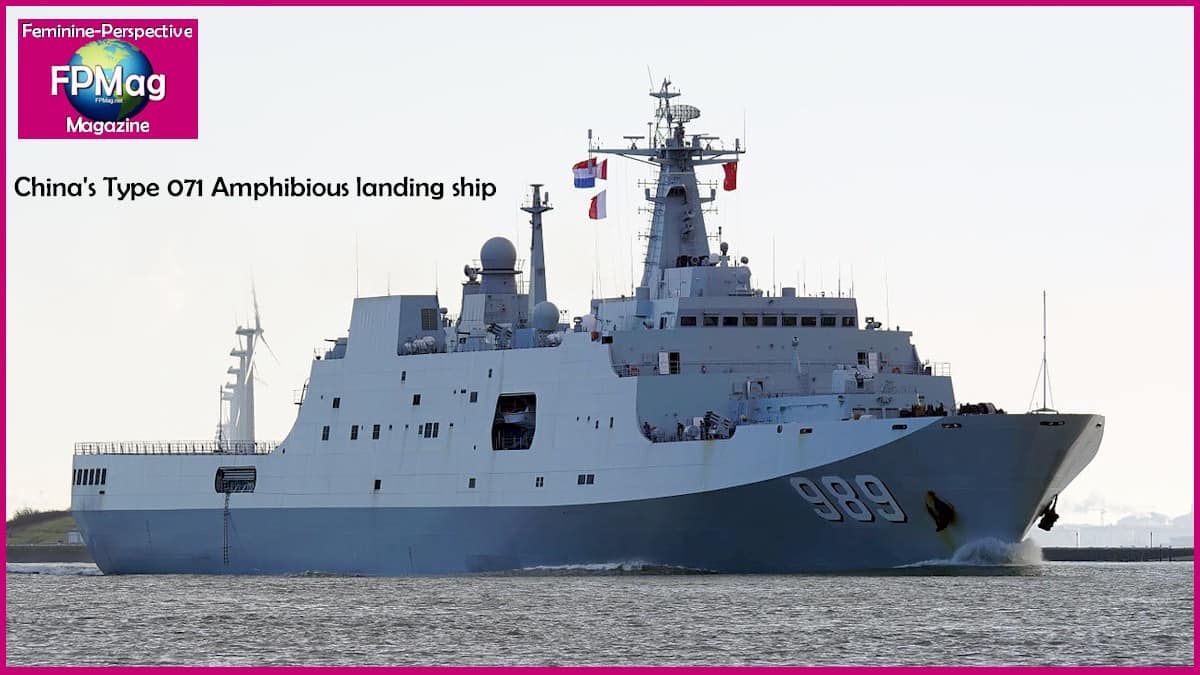 Type 071 amphibious transport dock in service since 2007, the Changbai Shan is succeeded by the type 075 above. Photo by Kees Torn

Recent events have tangled a situation that grows dangerously close to regional war.