Penis envy between two patriarchs may kill us all. America and China must stand down say Civil Society women

“Asian Seas militarization is out of control to the point of  becoming insanity,” say women human rights defenders in France following a series of military events they say in a press release, includes:

Author of the news release, Katie Alsop of RINJ Women says that “the recent escalation of military antagonism and violence in the Asian Seas by these old men in London, Beijing and Washington is endangering a community of at least half the world’s population. That community is not going to tolerate this small few men consumed with penis envy, flexing their nation’s military apparatus at each other.” 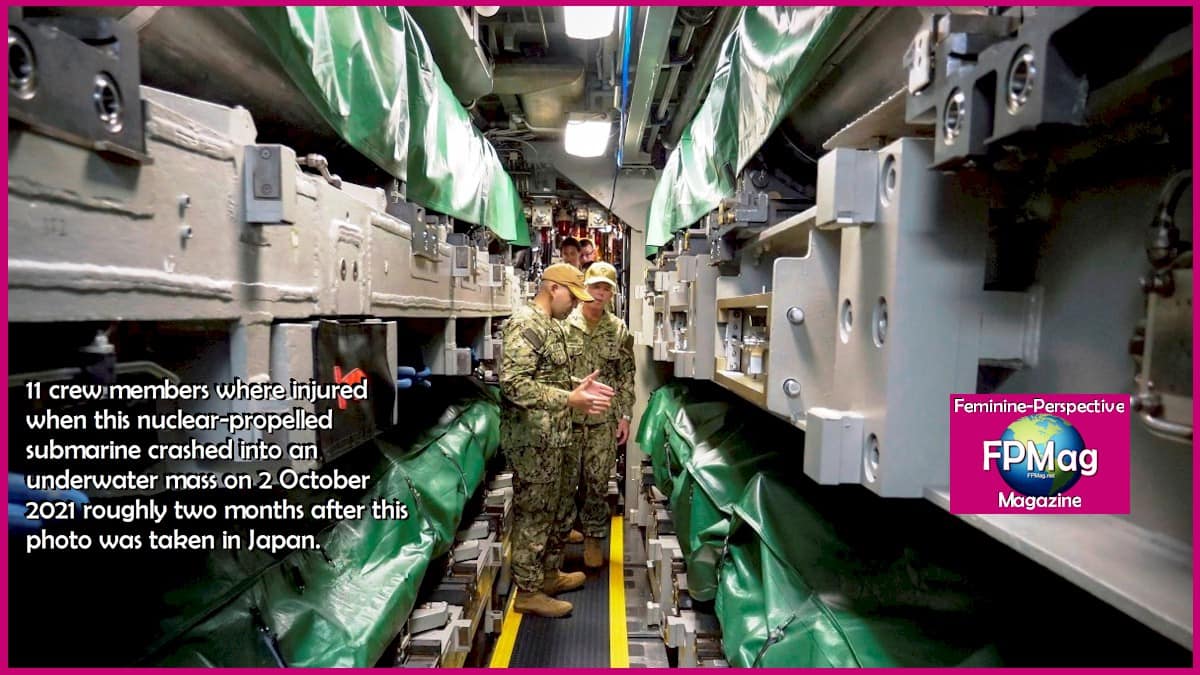 “China may have built up a sizeable military arsenal in the past twenty years but it has no experience in war fighting except its 1937 pantalon-spank it got when it was nearly wiped out by Japan.

“Based on China’s recent years’ military parades, the untried military is planning on using hundreds of thousands of its women as cannon fodder in a war that will decimate the population of women and children around the Asian Seas” she said.

“I look at the upper command levels of the Chinese communist party (CCP),” continued Ms. Alsop. “I also study the military leadership and the government and I do not see one woman in a senior role, just a small group of cranky old men who get no love from women, because they have killed off so many of them at birth. These are men who have created a corrupt, greedy, jealous patriarch with serious psychological and perhaps physiological, penis-envy problems,” she slammed down.

“Considering that China has so few women that on this very day it can be safely said that 90 million males will never find a female partner because of China’s criminal policies of infanticide against infant girls, there are no brides for a huge chunk of China’s male population in 2021. Using China’s female population as cannon fodder with which to start a war with the rest of the entire world is bloody stupid,” Alsop doubled down, demonstrating a symbol of the extreme and widespread level of anger at China for not one but two major China Air Force attacks against Taiwan.

“That’s not manliness, that is cowardice,” the leader of the global women’s group  challenged angrily. 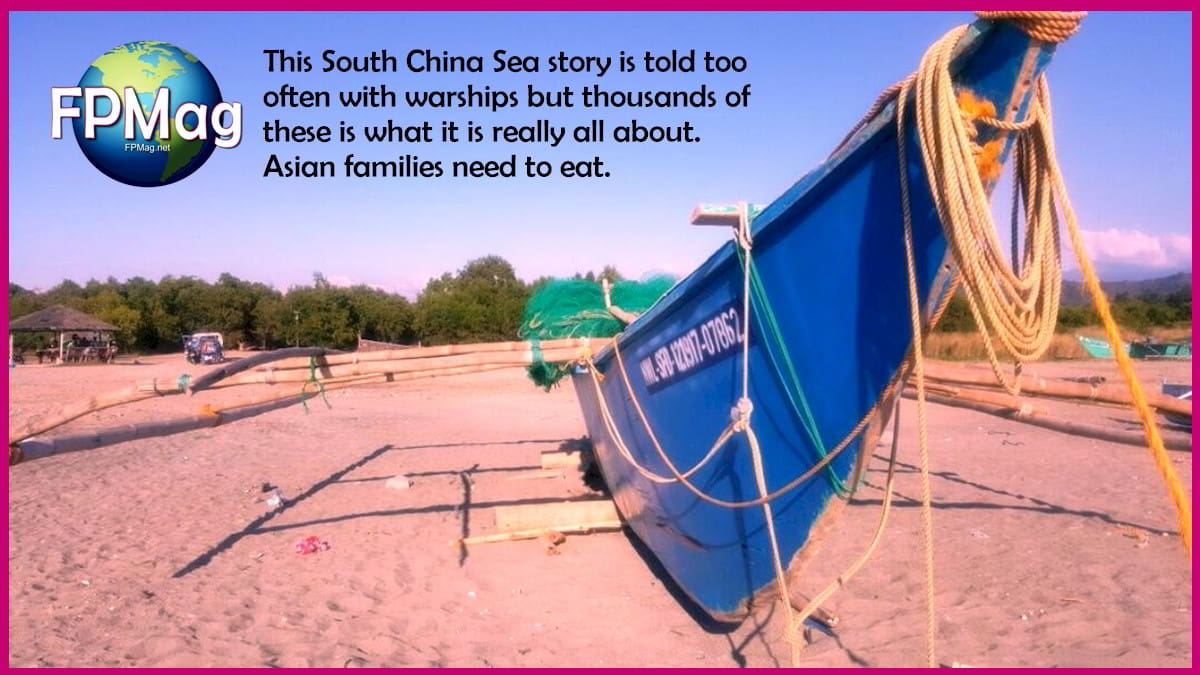 This Asian Seas story is told too often with warships but thousands of these is what it is really all about. Asian families need to eat. The war and military buildup in the Asian Seas between America and China threatens the existence of millions of ordinary people. Photo Credit: Micheal John/FPMag

In many Countries, human rights activists are livid with anger at China’s recent assault on Taiwan which seems to have polarized the discussion of Chinese history of the two nations, against Xi Jinping’s weak assertions that he will resolve the Taiwan issue in his favour.

“In the middle of a vicious global infectious disease pandemic, the male patriarchs running America and China are terrifying the billions of Asians and Americans in the region of the Asian Seas,” suggests Kathy Poon, a civil society volunteer worker, nurse and biostatistician in Singapore. “I like many Asians believe this super militarization of the Asian Seas is about the greed and the quest for power of a few men who abuse their power.”

The nuclear submarine (SSN 22 ) that Crashed into an underwater object off the coast of the Philippines under CDR. Cameron Mahmood Aljilani, USN.

Eleven crew members where injured and the submarine significantly damaged when this nuclear-propelled submarine slammed into an underwater mass on 2 October 2021, roughly two months after the above USS Connecticut photo was taken in Japan.

“This region is no place for those enormous submarines to operate because the waters are far too shallow and too filled with coral reefs and jutting rock mountain tops just below the surface,” noted Simon Baldock, an Israeli security analyst.

“I do not believe China has no knowledge of this SSN 22 event as it is pretending because an SSN boat as big as the Seawolf-class is as visible from space as is a chess piece visible on a chess board under Xi Jinping’s nose,” he said.

“And on that subject, the French have the best offerings in both the hybrid diesel-electric submarines and their ultra-compact class of nuclear-powered submarines. Why Australia’s leadership decided to go that route is illogical let alone a serious violation of the nuclear non-proliferation regime. They had better not try to continue on this path because they will be blown out of the water by their own people, if I am reading the recent polls correctly,” he added.

“Britain and America have stirred up enough racist acrimony against Asians lately, to create a small surge in hawkishness favouring nuke attack subs to go after China with, but that will not last when Australia must come to grips with the cost and the explicit dangers of building and maintaining nuclear warship power plants—all this at a time when sustainable alternative power is the primary goal for humanity’s investments against climate change.”

“Australians already know that climate change poses very real dangers. Sinking the gross domestic product into a two or three decade long nuclear navy buildup is certainly contraindicated, if the lives of the people of Australia and the South Pacific region have any worth to military planners,” he said in a Zoom call. 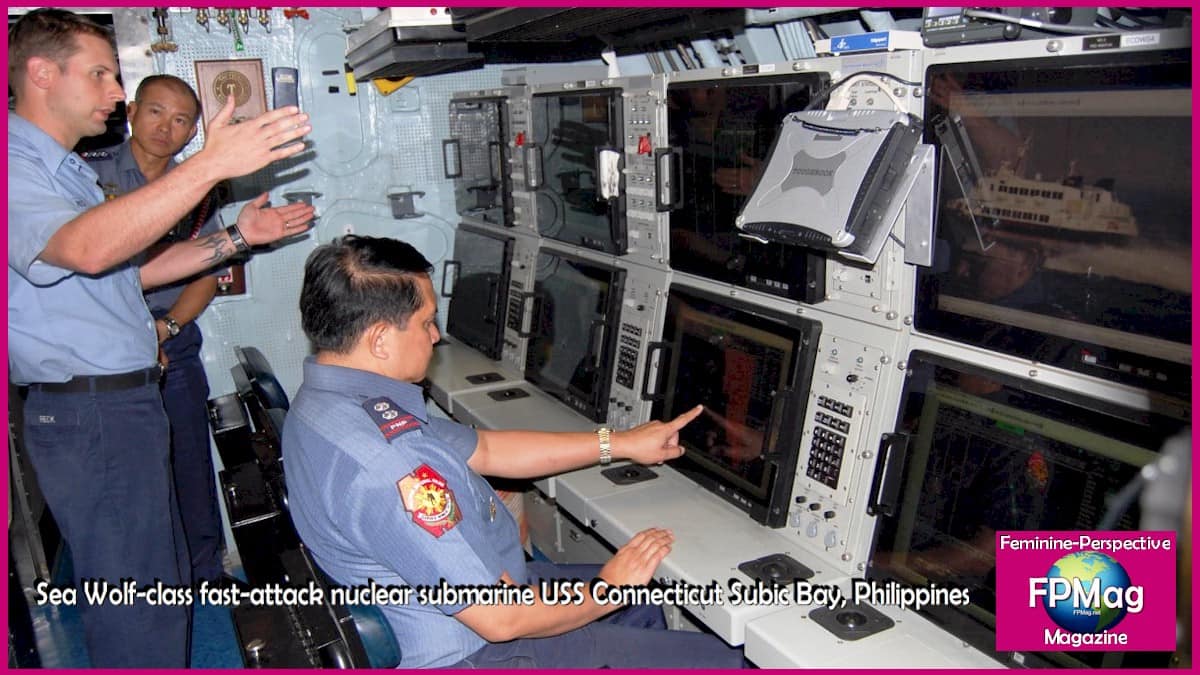 US Nuclear Submarine in the Philippines’, Subic Bay

Not a female in sight within the decision layers of two warring nations each trying to use military construction projects to boost their global dominance.

There has not yet been a female member of the Joint Chiefs of Staff, or a female secretary of defense,  or deputy secretary either, according to the Brookings Institute.

“Needless to say about China, there has not been a women in any high ranking military positions within  China either,” notes Sara Qin who has served in her nation’s military as a nurse, not much unlike  these women in the video above. “But they did not take my picture for a promotion,” said Ms. Qin in a Telegram call from Shenzhen.

“The U.S. should clarify an incident involving a U.S. nuclear submarine, including the exact location of the incident, the intention of the U.S. navigation, details of the incident, what the submarine collided with, whether it caused nuclear leakage, and whether it damaged the local marine environment,” said a Chinese foreign ministry spokesperson.

Zhao Lijian made the remarks Friday at a press briefing when asked to comment on the incident.

Zhao said that for a long time, “the U.S. has been stirring up trouble and creating tensions in the South China Sea in the name of freedom of navigation, which is the root cause of the incident and poses serious threats and major risks to regional peace and stability.”

Zhao noted the “U.S. deliberately delayed and concealed the details of the incident, lacking transparency and responsibility. China and countries around the South China Sea have no choice but to question the truth of the incident and its intentions,” she said. 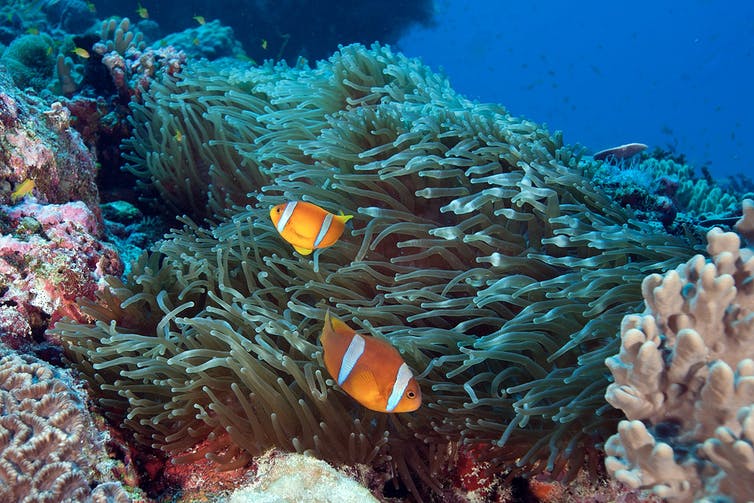 Coral Reefs like those that China and America are destroying with militarization of the Asian Seas.
Fish and anemones bring color to the reefs. Nuclear submarines do not fit in here one little bit.
Photo Credit: Ken Marks/Khaled bin Sultan Living Oceans Foundation