“We need to get out of this pandemic, but vaccine nationalism, very bad leadership from the G20,  and state-sponsored anti-vaccine propaganda is killing huge chunks of the human race,” says a women’s think tank assembled this past summer to sit on a forum from seven countries to conjugate and deliberate on a range of complex issues that face global families and how women can make a difference in:

G20 Told to Get SARS2 Vaccines into Poorer Countries.

“It is worth mentioning often that a report, A Dose of Reality, found that of the 1.8 billion COVID vaccine donations promised by wealthy nations, only 261 million doses (14%) have been delivered by 25 October 2021, while western pharmaceutical companies have delivered only 12% of the doses they allocated to COVAX despite their skyrocketing profits and bonuses to executives. COVAX is the initiative designed to help low and middle income nations get fair access to SARS-CoV2 vaccines,” said Geraldine Frisque, a coordinator of the all-women think tank.

The Fifth Wave of COVID-19 may now be incipient in Europe.

“Eastern Europe and many parts of Asia are being slammed with two dangerous pandemics: the SARS2 virus itself and anti-vaccination drives of America’s creation push massive disinformation campaigns on social media, YouTube and various so-called American News web sites against the Russian vaccine,” said Ms. Frisque who said she was expressing the concerns of the all-women-think-tank representing seven different countries.

“Not all countries in need can have access to anti-COVID vaccines,” said absent world leader.

“Despite the decisions of the G20, not all countries in need can have access to anti-COVID vaccines,”  President Putin told the G20 leadership attendees from Moscow in a video message. He continued saying “This happens mainly because of dishonest competition, protectionism and because some states, especially those of the G20, are not ready for mutual recognition of vaccines and vaccination certificates,” he added.

“I would like to point out that, despite the decisions of the G20, vaccines and other vital resources are still not available to all the countries in need. Among other reasons, this is due to competition, which is dishonest, in my opinion, as well as protectionism and the fact that certain countries, including G20 countries, are not ready for mutual recognition of the vaccines and vaccination certificates.”

That China and Russia are not represented among the leaders at the G20 this year is proof the trappings of power among humans on Earth are pretty but that leadership is so far disconnected from the people of their countries, they are irrelevant for the most part with the exception of maybe the European Union.

The Russian leadership is not present at the G20 this year due partly to the rise in COVID-19 cases; and the massive American anti-vaccination campaign in Russia on the 66.15 million Russian membership of Facebook.

Russians are terrified of vaccines having heard from America the most deceptive devious misconduct in the history of the human race. Telling Russians not to take the Sputnik V vaccine because the American propaganda says it is fake, or stolen or ineffective or turns people into monkeys… and that disinformation campaign is killing thousands of Russians, ordinary people who never hurt anyone.

‘Get Vaccinated, Russia and neighbours,” urges Dr. Nassima al Amouri, who has vaccinated many Russians, herself.

“The Sputnik jab is excellent,” she added, with a voice of experience. “Make sure people get the second jab which is very important. It helps make the vaccine work for a long time and also increases its ability to kill the virus,” she added.

Civil Society is taking on the American AntiVaxxer movement and  the propaganda from all sides against competing vaccines which has caused the deaths of countless people around the world.

The truth is that according to much peer-reviewed reports, high marks are given by scientists to the safety and efficacy of the Gamalaya vaccine,  a rAd26 and rAd5 vector-based heterologous prime-boost COVID-19 vaccine, after a randomized controlled phase 3 trial in Russia involving more than 22,000 patients in total.

A peer-reviewed article concluded the phase 3 trial of Gam-COVID-Vac showed 91.6% efficacy against COVID-19 and was well tolerated in a large cohort. In a follow-up Lancet article published on May 12, 2021, the author stated: “The reporting of the interim analysis in the phase 3 Sputnik V clinical trial fully complies with those standards.”

According to a Lancet report, the Sputnk V vaccine is very different from all the others. Sputnik V uses two different adenoviruses, called rAd26 and rAd5, for the first and second doses, respectively.  All of the adenovirus vaccines are very good: Sputnik V, AstraZenica and the Johnson and Johnson vaccines.

Nature magazine reported on one of the differences being the human virus vector, saying that Dmitry Kulish, a biotechnology researcher at the Skolkovo Institute of Science and Technology in Moscow, who is not involved in the development of Sputnik V, says the scientific reasoning would have been to increase efficacy. The two adenoviruses have slightly different methods of introducing their genetic material into a host cell, he says, which would theoretically improve the success rate of getting the viral genetic material where it needs to go.

The effects in the field of all vaccines have shown positive outcomes. 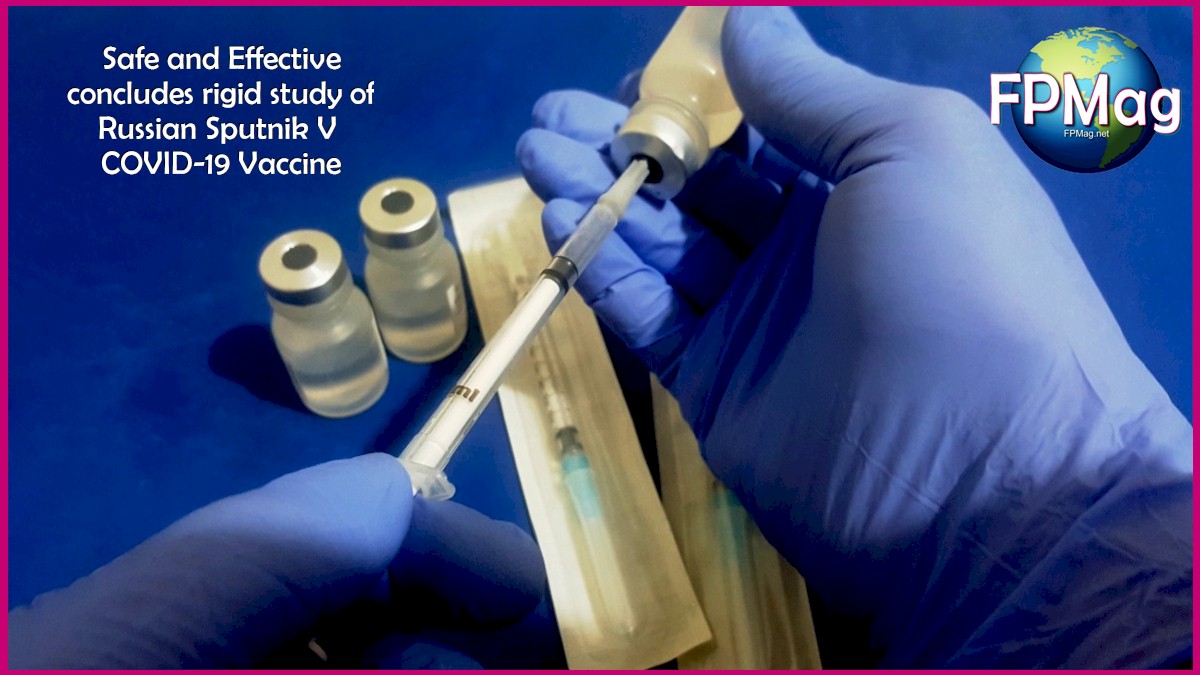 Sputnik recipients generated robust antibody responses to the spike protein, which included neutralising antibodies, the proportion of the total immunoglobulin that inhibits the virus binding to its receptor. They also showed evidence of T-cell responses, consistent with an immune response that should not quickly wane. Photo Credit: Melissa Hemingway. Art/Cropping/Enhancement: Rosa Yamamoto FPMag

In his address to the G20, Russian President Putin  proposed, “instructing healthcare ministries of the G20 to address the matter of mutual recognition of national vaccination certificates within the shortest possible term.”

“Experts believe that COVID-19 will continue to be a threat for a long time,” President Putin added.

“I think WHO representatives will speak about this today as well. Considering that the virus continues mutating, we should develop mechanisms to boost vaccines promptly and consistently.

“I would like to remind you that Russia was the first country in the world to register a COVID-19 vaccine, Sputnik V. Currently, this vaccine is approved in 70 countries with a total population of over 4 billion people, and it has demonstrated high safety and effectiveness. In addition to the double-dose Sputnik V, we also developed and widely use a single-dose vaccine, Sputnik Light, which can boost the effect of other vaccines. We are working with our colleagues from Europe on having this vaccine available there and offering it to our partners.”

French diplomat Pierre Vimont, a senior fellow at Carnegie Europe, said this summer that, “Even when you’re facing an adversary,” he told the BBC, “you have to think of your own interests,” when asked if France and other European nations should be using the Sputnik Vaccine.