—Video: July 2020 Rep. Alexandria Ocasio-Cortez, D-N.Y., took to the House floor to admonish the insults hurled at her by Representative Ted Yoho, R-Fla.

By 8 November, FPMag observed Gosar’s violently misogynistic video had over 3 million likes and was shared by some 30,000 users. It was an anime version of himself with Republicans Lauren Bobert and Marjorie Taylor Greene attacking a creature wearing Alexandria Ocasio-Cortez’s face, killing her.

Paul Gosar’s tweet rapidly became a centerpiece of Twitter as the misogynistic social media platform left the video in place despite massive protests from netizens.

About the Tweet, a founding  director of the RINJ Women organization issued a statement on the civil society group’s website.

Katie Alsop, a founding director of the global RINJ Women told FPMag last week that in 2021, her organization’s Women’s Crisis Help Line has been inundated with calls from American women and American girls reporting extreme gender-based violence, especially in areas under pandemic lockdown.

“One girl reported last week that her stepfather, playing around with a large knife, cut her requiring stitches when he got carried away mocking Paul Gosar’s cartoon of Gosar killing Alexandria Ocasio-Cortez with a big knife. The girl had rejected the man’s sexual advances and he had become angry,” Ms. Alsop  explained in a phone conversation.

A statement released by director Katie Alsop, of the global women’s rights NGO had prompted the FPMag interview.

“In the first week of November, amidst evolving violent misogyny among lawmakers in America, Republican Congressman Paul Gosar published one of Twitter’s most popular Tweets ever. It was a cartoon of him and Marjorie Taylor Greene killing Alexandria Ocasio-Cortez. Misogynistic Twitter refused to take it down. America is now a different place, not safe for women.”

“Violent abusiveness toward American women is an example set to the world. Violent misogyny in America is growing quickly as lockdowns have shown that women have been imprisoned with violent men who have beat the life out of American women and girls.

“American women and girls could migrate to Canada or Europe if they are suffering abuse or at risk of death from American men who are more and more feeling they have the right to violence against women, with impunity,” said Ms. Alsop in a published statement.

Attacks on women, according to the following anecdote by an American nurse, are increasing following Gosar’s Twitter Killing of Shero Alexandria Ocasio-Cortez.

“I fear an American lunatic with an AR15 (not hard to find anywhere in the USA) may carry out far-right Republican Representative Paul Gosar’s wish,” suggests Monique Deslauriers, a Calais, Maine nurse practitioner during a Zoom interview..

“Misogyny in the United States has reached a new pitch. Last Friday, five days after Gosar posted that cartoon about killing Alexandria Ocasio-Cortez, I was standing talking to a male doctor outside a hospital, both of us wearing scrubs.

“Two men walking past started shouting at me about vaccine mandates and saying ‘eff-you’ over and over because they were being forced by their employer to get vaccinated.

“A truck driver walking from the parking area to the sidewalk, overhearing this became visibily agitated and started yelling slurs and then screaming foul language about vaccine mandates, and then punched me,” said nurse Deslauriers.

“An elderly man wearing a leather jacket with a small confederate flag and looking like the jacket had literally been defeated in that war,  slapped me as he yelled and walked by,” she added.

“There are several points that I want to make about this violently misogynistic episode,” she said.

“When one radical male starts shouting down a woman, other radicals will immediately and more vociferously join as did these men on their way to a compulsory-for-work vaccine.

“There were two people, standing there in scrubs, in broad daylight, and the passersby complaining about vaccines picked only me, the woman, to vent against, as they headed in to get their vaccine jabs in order to keep their jobs.

“Republicans stirred up hatred for medical professionals, especially women, with their antivaccine rallies, anti-mandate bills, and anti-mask legislation and protests.

“More than that, Republicans like Paul Gosar have raised the bar on what level of violence disagreement can take, like punching me because men don’t like to be told to get vaccinated or get fired. I am glad there were no swords or knives available because that is what Gosar proposed to use for killing AOC.

“A Republican-led, extremely violent 6-January-attack on the US Congress showed every home-grown terrorist in America that even politicians resort to extreme violence, even a US President resorting to lawlessness, to assaultiveness, and to trespass, to make their complaints,” she continued with her voice quivering.

“And as Paul Gosar demonstrated to America’s great unwashed, violence against American women is worth millions upon millions of likes among America’s verified-ruling-class aboard America’s misogynistic Twitter platform.

“She is not safe in my view,” said Ms. Deslauriers.

“Alexandria Ocasio-Cortez is not safe in America and the Republican Party should do something to withdraw its attacks on her plus pay for her 24/7 police protection,” she added. 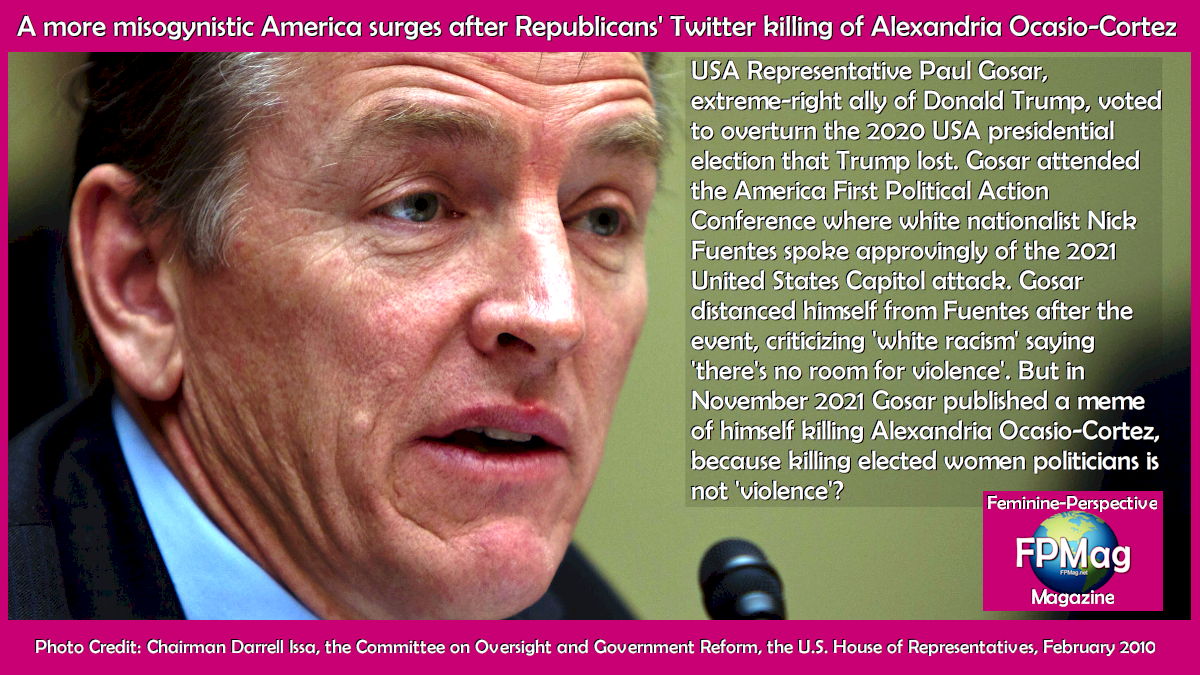 “Misogyny and sexual harassment appear to be pervasive among young people and certain forms of gender based degradation may be increasing,” concluded a 2017 Harvard University study.

In July 2020, Maia Niguel Hoskin wrote in Forbes Magazine that, “The Ugly Reality Of Violent Misogyny In America Is Systemic, Endemic, And Normalized”

What is systemic, endemic, and normalized  violent misogyny?