“Dreams are like stars and I will bring you one back,” Colonel Wang had told her little 5-year-old daughter, before leaving on a 6-month space voyage; so goes the scuttlebutt. Then mom set out to unintentionally spark a focus on how women are missing from the rows of men who run China.

“Ever since the first Chinese flew to space in 2003, I’ve been thinking to myself: now that men went to space, when can women do that too,” Deng Xiaoping once queried.

Mao Zedong once said that, “our women hold up half our sky,” but China, like America, and most of the world, is a bastion of misogyny.

“Science is turning that around, to some extent in China, however. Women are better scientists in China, making a difference and gaining notability. Women in Beijing politics are not because bar the extremely rare exception, there are none or as in the politburo, one. In that regard, China is behind all the rest of the developed countries of the world,” said Shenzhen, China nurse Sara Qin, when asked to comment. Nurse Qin, in late 2019 through mid 2020, fought the Coronavirus outbreak in Hubei province and was awarded as many as five times for extraordinary work in leading her medical team, fighting the SARS2 outbreak.

“The first American woman in space, Sally Ride, spent seven days aboard the space shuttle Challenger during its STS-7 mission in June 1983,” according to NASA historical documents.

“In space travel, Colonel Wang Yaping is extraordinary. For China, Colonel Wang’s spacewalk on Monday, 8 November 2021, could be a milestone if some form of gender equality in space exploration is to evolve, but to now, barely 10% of all space explorers were women,” says Kathy Poon, a Chinese biostatistician and scientist working in Singapore with the CSPaC team. 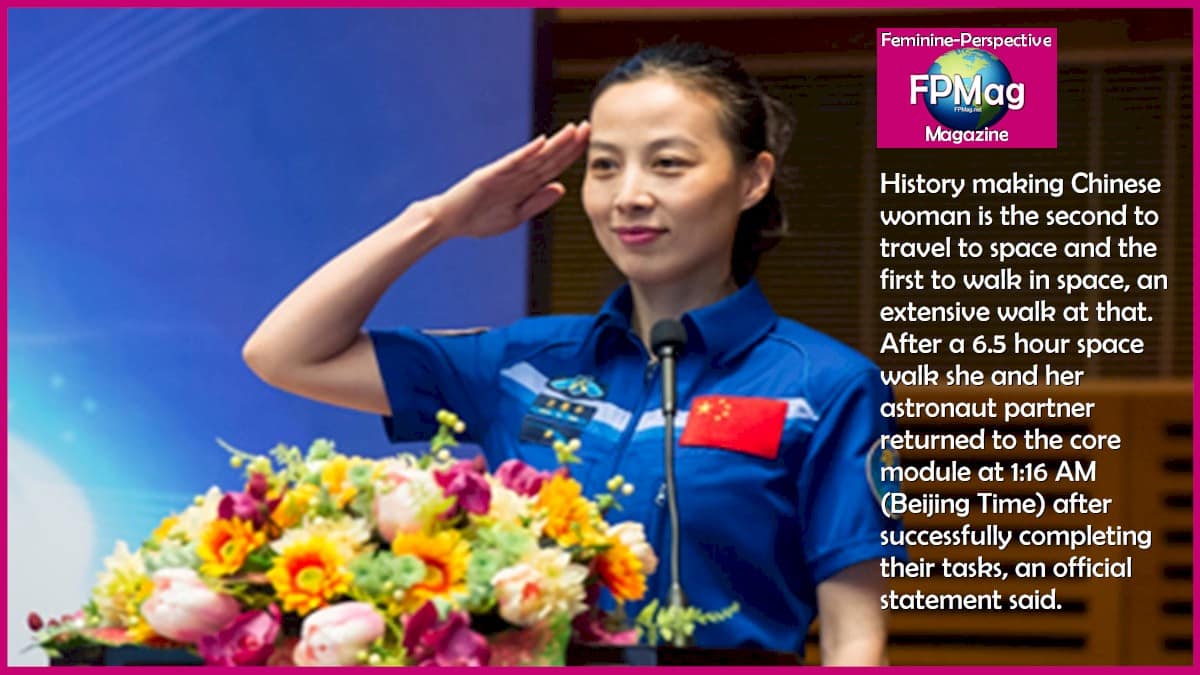 Shenzhou-13 crew member Colonel Wang Yaping
History making Chinese woman, Colonel Wang Yaping is the second Chinese woman to travel to space and the first to walk in space, an extensive walk at that. After a 6.5 hour space walk she and her astronaut partner returned to the core module at 1:16 AM (+8 GMT after successfully completing their tasks, an official statement said.
The space walk further tested the functions of the new extravehicular spacesuits, the coordination between the astronauts and the robotic arm, according to Xinhua official China news agency. Photo Credit: Xinhua Art/Cropping/Enhancement: Rosa Yamamoto FPMag

“While the Chinese space Agency makes much to-do about nothing, heralding the special facilities for delivering sanitary napkins and cosmetics for the mission, an American returning capsule mission is having a real stinky-poo issue wearing diapers because of  a broken toilet. There is a woman aboard the SpaceX operation, NASA Astronaut Megan McArthur,  but hopefully a  male fellow astronaut can change his own diapers. Maybe that’s another quasi-first: a man changing diapers in space,” noted Geraldine Frisque, a feminist with a global women’s group.

Another First in space?  Man Changes Diapers in space?

Another first in space? A man changing diapers in outer space? NASA astronaut Megan will spend 20 hours in the SpaceX capsule, from the time the hatches are closed until  a  planned splashdown, hours from now.
From left to right, Mark Vande Hei, Shane Kimbrough, Akihiko Hoshide and Megan McArthur, pose with chili peppers grown aboard the International Space Station on Friday, 5 November 2021. Photo Credit: NASA

“The unfortunate part of Wang Yaping’s success is that it-is-a-big-deal, but women should have been an equal part of mankind’s space exploration from the outset. If it had been a woman on 20 July 1969 saying something like, “That’s one small step for man, one giant leap for mankind,” as did the patriarch’s Neil Armstrong, the higher pitched woman’s voice would have been heard throughout the expanding universe with an echo that would have brought back the astounding cheer, “Humans have evolved,” but sadly, that is not the case, said Katie Alsop, a founding director of the global women’s civil society group, RINJ Women.

History making Chinese woman, Colonel Wang Yaping is the second Chinese woman to travel to space and the first to walk in space, an extensive walk at that.

After a 6.5 hour extra-vehicular sortie on Monday, Colonel Yaping Wang, her five-year-old-daughter watching from Earth,  and her space-walk astronaut leader, Major-General Zhai Zhigang (55) whose wife Zhang Shujing and son are also watching in awe, returned to the core module at 1:16 AM (+8GMT) after successfully completing their tasks, an official statement said.

The space walk further tested the functions of the new extravehicular spacesuits, the coordination between the astronauts and the robotic arm, according to Xinhua official China news agency.

On Monday, 9 November 2021, Colonel Wang Yaping (41) became the first Chinese woman astronaut to walk in space. She was on a 6.5 hour all-work mission with Major-General Zhai Zhigang while astronaut Colonel Ye Guangfu (41) from Chengdu, Sichuan,  anchored the sortie from aboard the Tiangong (Mandarin for “heavenly palace”) under-construction space station.

Colonel Wang was watched closely by her five-year-old daughter in amazement. According to a Xinhau report, the historic astronaut mother told her daughter, “Dreams are like stars and I will bring you one back.”

The family is from Shandong province. Wang Yaping joined the People’s Liberation Army Air Force in August of 1997. She served as a deputy squadron leader before joining the second group of astronauts at the PLA Astronaut Division in May 2010.

History-Making Woman is only the second Chinese woman to travel into space in a world wherein only 10% of space travelers are women.

In March 2012, Wang Yaping was part of the reserve crew for a manned Shenzhou mission, ninth in the series.

In June 2013 she took part in the 10th of Shenzhou series which lasted nearly 15 days. She became the second Chinese woman to have flown in space on the 10th Shenzhou mission.

Colonel Wang, supported by crew members, gave China’s first space-based lecture inside the Tiangong-I experimental module to more than 60-million school students in some nearly 80,000 schools across the People’s Republic of China.

“Dreams are like stars in the universe. They look far and unreachable, but as long as we try, we are destined to reach them,” Wang once said during an interview with China Central TV. Astronaut Wang Yaping has become the first Chinese woman to walk in space, authorities said Monday, as part of a six-month mission to the country’s Tiangong  orbiting space station.
Colonal Yaping Wang (41) and fellow astronaut Major General Zhai Zhigang (55) left the main module of the Tiangong station for more than six hours to install equipment and carry out tests alongside the station’s robotic arm as part of its ongoing construction, according to the China Manned Space Agency. Astronaut Colonel Ye Guangfu (41) from Chengdu, Sichuan,  anchored the extra-vehicular sortie from within the living space module of Tiangong.  Photo Credit: Xinhua