US Sec. Blinkin not seeing justification for bombing media facility

US Secretary of State Antony Blinken said, Monday, US time, that he has not seen any justification for the Israeli bombing of the media building in Gaza City on Saturday.  Much of the world watched the live video coverage of destruction of the al-Jalaa tower in Gaza City, which housed Qatar-based Al Jazeera Media Network and American news agency The Associated Press on 15 May.

Benjamin Netanyahu, the Israeli caretaker prime minister who has failed to win a quorum allowing his staying in office, claimed the Associated Press and Al Jazeera building was a “perfectly legitimate target”.

The Israeli military when approached said that the building had a piece of Hamas equipment inside. The CEO of the Associated Press demanded evidence but none as yet has been offered, reports AP.

Secretary Blinken publicly stated in response to questions that, “Shortly after the strike we did request additional details regarding the justification for it.”

“Before bombing Aljazeera and the Associated Press, the Israeli government cleared the bombing with the White House, according to two security sources close to the information, who are unhappy with the action.

“A worker in the US State Department confirmed that it would be, “normal for Israel to warn but not get permission that it was about to conduct an attack” against a US/Israel common interest,” FPMag reported on Saturday.

Read if you wish: Aljazeera and Associated Press bombed out by IDF in Gaza. A line too far.

Two other media buildings had already been bombed.

In addition to the Al Jazeera and Associated Press Building bombing, during the morning of 12 May, Israeli airstrikes destroyed the Al-Jawhara Tower, a 10-storey building in Gaza City that housed 14 media outlets including the Palestine Daily News newspaper and the pan-Arab TV channel Al-Araby, says Reporters Without Borders.

On the 13th of May, the 14-floor Al-Shorouk tower, home of seven media outlets including the Al-Aqsa radio/TV broadcaster was also destroyed according to a reporter working in that building.

Reporters Without Borders says it has asked the International Criminal Court to investigate Israel’s bombing of multi-use buildings housing the media organizations as a possible war crime. The group has asked chief prosecutor Fatou Bensouda to include Israeli air strikes on more than 20 media outlets in the Gaza Strip in her investigation into the situation in the West Bank and Gaza.

Human Rights Watch said on Al Jazeera today that, “there is no justification for bombing any high-rise buildings”.

All of the destroyed media buildings had reporters on the roof as well as permanent cameras monitoring events in Gaza and surrounding environs, according to an Al Jazeera reporter, Safwat al-Kahlout, who has known the facilities for over ten years.

In the second week of hostilities between Hamas and Israel in Gaza it is clear that a disproportionate number of women and small children are being killed in their homes by the Israeli air strikes. 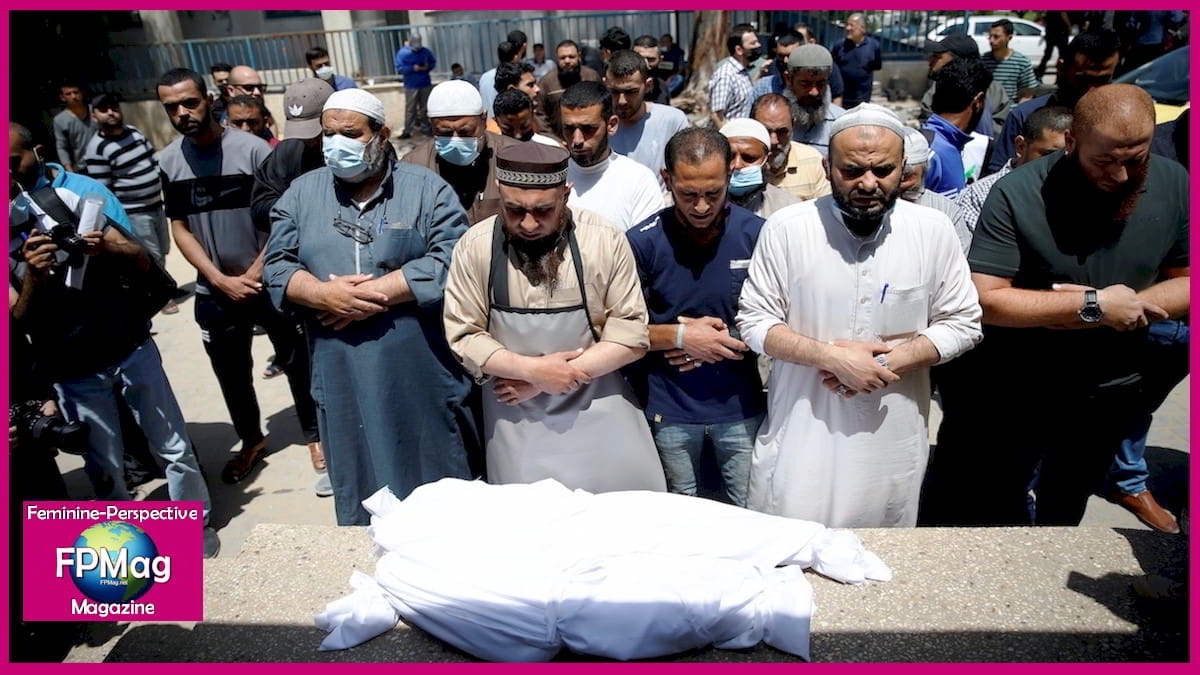 In the second week of hostilities between Hamas and Israel in Gaza it is clear that a disproportionate number of women and small children are being killed in their homes by the Israeli air strikes. Photo Credit: Al Jazeera via Twitter. Art/Cropping/Enhancement: Rosa Yamamoto FPMag

Dr. Nassima al Amouri tells FPMag via Signal app that she and coworkers have suffered the loss of two colleagues, both MDs over the weekend due to Israeli air attacks. Gaza Strip deaths are now standing at 265 according to the morgues, including patients sent to Egypt for care and others who were unable to come to the hospital for coronary and other emergency events because of the bombings. “They will be counted as war deaths,” she explained.

“The numbers are growing as more bodies are found by searchers in the rubble,” she added. “Even those EMS workers are overstressed and overworked because of the dozens of homes being bombed to the curbs.”

“We are sending some patients to Gaza because we are short of medical equipment and supplies due to a deluge of patients who are badly injured. Also the years of blockade even during the pandemic have prevented these medical facilities to properly equip,” she added.

The Current Gaza Massacre began as a consequence of Hamas protesting the attacks on the Al Aqsa Mosque in Jerusalem and the forced evictions of Palestinians in occupied Palestine territory, East Jerusalem. Watch as a young boy explains what happened to his family.