Sources among nurses and other medical practitioners in India provide an anecdotal picture from which one can conclude most COVID-19 cases in India never present in a hospital.

Moreover, say the medical workers, “most COVID-19 patients in India, especially in the poorer provinces, die at home”.

by Sharon Santiago with Micheal John

The University of Washington (IHME) forecasts 1,180,450 COVID-19 deaths in India based on current projection scenarios, by September 1, 2021.

The IHME report said that the number of deaths on the date of this article’s publication was 962,274 deaths.

The CSPAC estimate for publication date is 962,010, a slightly smaller number. At the time of publication, CSPAC did not offer a forecast for 1 September 2021. Both agree that unless significant mitigation efforts are taken by the government and the people of India, the current decline in cases will reverse as a new variant under study could be a challenge.

“Biostatisticians and epidemiologists around the world have used modified universal algorithms to estimate the true cost in lives of the SARS-CoV-2 in India and the blended average of those data are staggering. From across the science communities there is little difference in the estimate and projection totals,” explains biostatistion and infectious disease researcher, Fred Harris, from Singapore. 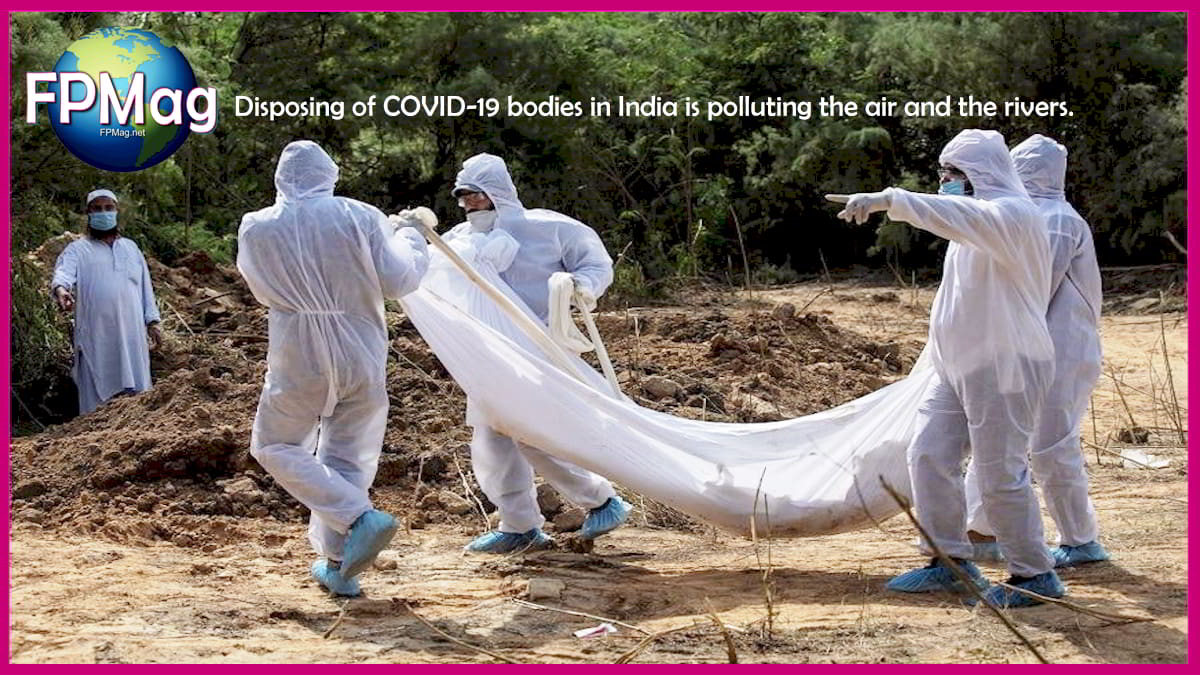 Tens of thousands if not hundreds of thousands of bodies in India are being burned in funeral pyres. Thousands more have been found floating in rivers. Disposing of COVID-19 bodies in India is polluting the air and the rivers. Photo credit: Source supplied.  Art/Cropping/Enhancement: Rosa Yamamoto FPMag

Nguyen Thanh Long is a doctor and the current Minister of Health of Vietnam. He has been widely respected for being a chief strategist behind Vietnam’s highly successful  COVID-19 pandemic response.

“Vietnam has uncovered a new COVID-19 variant combining characteristics of  two existing variants, one that was first found in India and the other first seen in the United Kingdom,” Nguyen Thanh Long said on Saturday.  “The characteristic of this strain is that it spreads quickly in the air. The concentration of virus in the throat fluid increases rapidly and spreads very strongly to the surrounding environment,” he added in a talk with government officials on the weekend.

“Vietnam has seen a number of cases of this hybrid, enough to raise a suspicion and start deeper genomic surveillance,  but has not yet specified the exact details” commented Fred Harris of CSPAC.

“Vietnam will be submitting genomic data to the GISAID global genomic bank and probably the NIH Genbank  in the near future,” said Dr. Harris.

Since the start of the outbreak in early 2020, Vietnam has reported 7,168 COVID-19 cases, 47 deaths, and 2,950 recoveries as of the time of publication. A little more than half of the cases were reported in the last month, and a large number of those were the ‘new variant’  sources in Vietnam told the Civil Society Solidarity Partners against COVID-19 team in Singapore.

On Sunday the health minister said the government will begin social distancing measures for 15 days in  Ho Chi Minh City,  starting from Monday, in an effort to curb a new spread that has become worrisome.

India, a country which stepped up in 2020 to manufacture vaccines,  needs much help in 2021 to relieve a merciless COVID-19 crisis. It is not over yet, say scientists.

The Lancet COVID-19 Commission India Task Force, in mid May, offered to the world a thoroughly thought-out plan of action to help India.

The outcome, they say has been global giving of meals, medical supplies, PPE, oxygen tanks and the equipment and materiel needed to fill those tanks.

A coalition of Asian-American groups, including Indian and Chinese members, announced on Sunday that they have pledged $1 million USD towards SARS-CoV-2 assistance in India.

“Asian-Americans are coming together and standing with fellow Asian-Americans to help with this humanitarian crisis,” said George He from the New England Chinese-American Alliance.

University of Washington graph shows daily cases  projection, of what could happen to India’s “surge” if vaccinations, social distancing and mask-wearing are not utilized to stop the massive spread. “Yes, the whole world is worried about India,” noted one biostatistician. 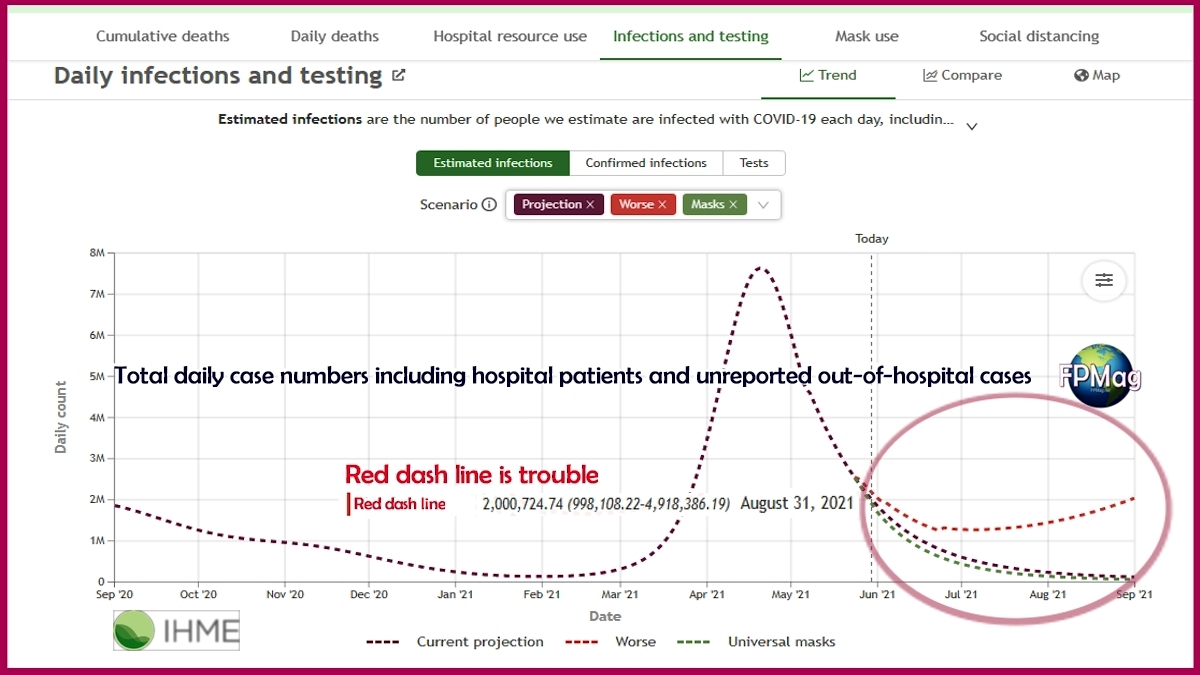 Graph shows projection of what will happen to India’s “surge” if vaccinations, social distancing and mask-wearing are not utilized to stop the spread.  IMHE Graph (University of Washington) with Art/Cropping/Enhancement: Rosa Yamamoto FPMag

Notwithstanding the need for the world to step up and help India, India, in order to avoid a reversal of the current decline in case growth must abide the universal mitigation approach to SARS2.

“Congregating nose-to-nose in massive gatherings, and on top of that wearing no mask, is not only what we call ‘contraindicated’, it is insane behaviour. If SARSCoV-2 is introduced into a susceptible population and those people mingle together, then there will be significant community transmission of the deadly disease COVID-19,” says Karinna Angeles, an Asian public health nurse based in Manila.

“Asians are standing together on this one, says nurse Angeles. I have donated money online and may go back to India to work in a hospital if my visa gets approved,” she added. “But if things get worse here at home, I will stay and continue to work at home because charity begins at home. It’s like ‘charity’ because we nurses are severely underpaid in the Philippines and brutally overworked.”

India’s Super-Spreader events must have led to this massive, deadly second surge.

Read if you wish: COVID-19 in India: an unfolding humanitarian crisis

“In March and April, there were state-level elections across several Indian states, which comes with associated campaigning and population mixing,” writes  Michael Head a Senior Research Fellow in Global Health, based in the Clinical Informatics Research Unit at the University of Southampton, UK.

“Fans attended the international cricket matches between India and England, with full stadiums and few wearing masks. And there have been several large religious festivals, such as the Kumbh Mela, an event that occurs once every 12 years and is attended by millions,” Dr. Head continues.

“There are recent examples from China, Saudi Arabia and Israel where key religious calendar events have been cancelled or scaled-back, to reduce the mixing of infectious and susceptible people during the pandemic. This includes the Hajj and Chinese New Year,” he adds.

“India may have scaled back on their celebrations a little, but millions have been gathering for Kumbh Mela across different sites, and thousands of new coronavirus cases are already confirmed in revellers.”  Citing: COVID-19 in India: an unfolding humanitarian crisis

Note: India's reported death sum and cured data are widely seen among epidemiologists and biostatisticians as unreliable. For example, 2,677,263 is CSPAC estimated sum of deaths while India reports 486,784, creating the largest discepency in the world. India might only report hospital tested cases. Sources among hundreds of nurses and other medical practitioners provide a picture that in summary concludes most cases never present in a hospital especially in northern provinces where health care is less available and utilization is low anyway because of poverty, hence most people die at home in India. This theory could explain discrepancies between reported data and algorithmic estimates.

The article " Unless India gets its act together another surge is coming say biostatisticians in Washington State " was written by Author: Sharon Santiago (Biography, Email) Staff Writer and Asia Pacific Editor. A medical practitioner specialized in treating GBV patients.
Contact Sharon Santiago on Twitter ~ Facebook