Series: The case against Donald Trump starting with Giuliani

The presidency of Donald Trump has badly damaged the United States. This was evident in the current and ongoing “2021 Gaza Crisis”. America in the context of global trust is more of a problem than a solution or reliable partner.  Even its own people do not trust America.

America is now a top enemy of China. By its actions such as the mass murder on 3 January 2020 of officials in Baghdad—which caused the Iraq government to order the Americans out of Iraq, or by self-declaration—America is also an enemy of Syria, Iran, Iraq, North Korea, Russia, Turkey, and Afghanistan. That’s a huge percentage of the world population, billions, now comprising an enemy of the USA.

Guess whose names keep coming up? 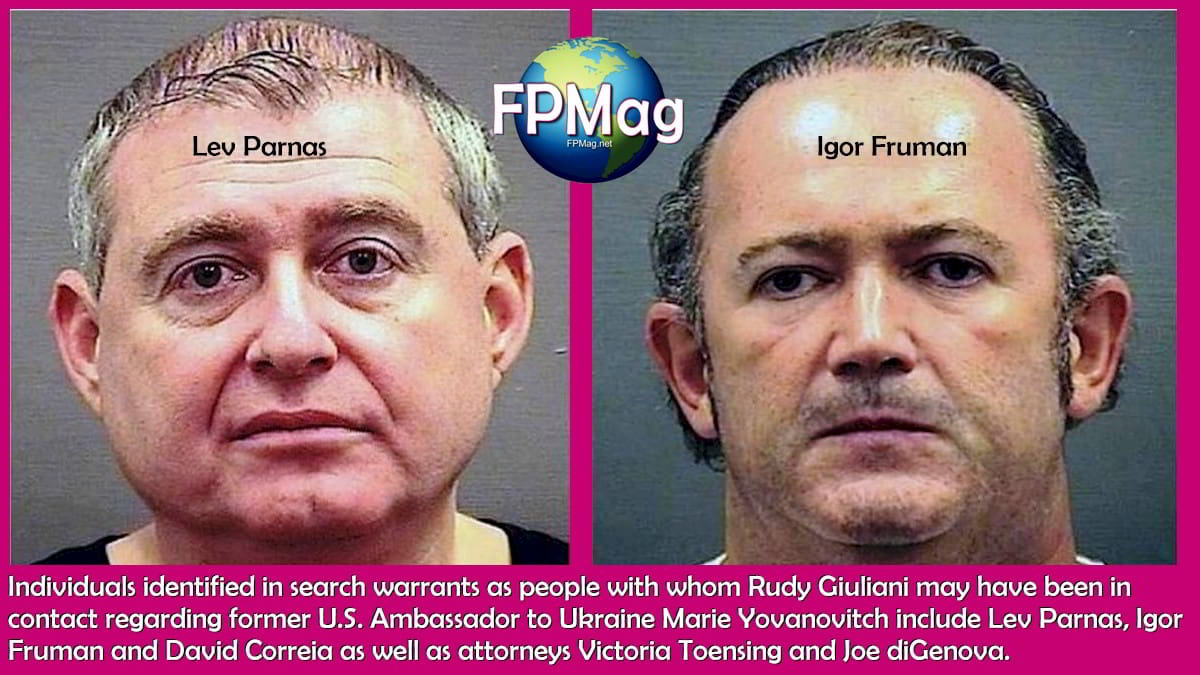 Two men on the FBI list in the matters of Rudy Giuliani, and perhaps Trump, among numerous individuals identified in search warrants as people with whom Rudy Giuliani may have been in contact regarding former U.S. Ambassador to Ukraine Marie Yovanovitch, including Lev Parnas, Igor Fruman and David Correia as well as attorneys Victoria Toensing and Joe diGenova.

FPMag begins a series of articles on the alleged, “Case against Donald Trump“.

Mr. Trump has not been charged with a crime but is under investigation.

This should be a crime if commit by a US President?

“Donald Trump has consistently marginalized women as sex objects and incompetents. Trump has portrayed himself as being entitled to sexually assault women any time he chooses and some two dozen have accused him of that. For that reason alone, millions of American women would like to see this misogynist brought to justice for any and all of his crimes against the American people,” says Geraldine Frisque, a spokesperson for the global women’s rights group RINJ Women.

Trump has also vilified American media with phrases like, “absolute scum” and labelling networks as “fake news”, their staff as “totally dishonest people“, and their reportage as “the enemy of the people”.  This in turn may have thrown gasoline on the fires raging against journalists giving rise to more attacks against journalism from despots around the world.

For example, when Benjamin Netenyahu bombed three buildings housing the media in Gaza City, the current president hardly raised an eyebrow as the world was freaking out.

Trump  has labelled much of the US government as part of “the deep state” and attacked to the point of  the US electoral system destruction by instigating with his followers numerous State-controlled voter suppression laws in GOP-led states.

A Politico poll this weekend suggests that of the GOP voters surveyed, 63 percent said they doubted the U.S. election system, while just 34 percent still believed in it.

Trump has claimed that America is not a democracy. What’s the world to think?

Trump’s cavalier attitudes toward human life and personal safety are still as dangerous as was his rally in Henderson, Nevada, on 13 September 2020 according to Columbia University Professor Jeffrey Shaman and Dr. Ryne A. Sherman, who writes for Psychology Today.

“This is not just ineptitude, it’s sabotage,” said Dr. Jeffrey Shaman, an epidemiologist at Columbia University in New York City, who modelled the evolution of the pandemic and how earlier interventions might have saved lives in the United States. “He [Trump] has sabotaged efforts to keep people safe,” Dr. Shaman told Nature Magazine.

What’s next in the recent series of civil and criminal investigations and rumours against the Trump family and Giuliani.

Mr. Giuliani is an elderly gentleman who was also a former candidate for a GOP presidential nomination.

Mr. Trump, also a senior citizen, like Mr. Giuliani has not been charged with the commission of a crime either but he and his organization are under investigation.

The current Attorney General of New York State is not running again.

“While I can’t say what I will specifically do without seeing all the facts and the evidence, if Donald Trump or any of the Trumps committed crimes in Manhattan, I will prosecute them,” said candidate Eliza Orlins, a public defender.

Investigators have been digging through thousands of Trump-case documents.

One of the people suggested by numerous sources as a target of investigations into tax fraud is Mr. Trump’s chief financial officer, Allen Weisselberg. The matter is likely to come up during the election campaign.

–Will Donald Trump be charged for the speech he delivered using language some people believe incited a riot at the US Capitol Building on 6 January 2021? (The USA House of Representatives of the 117th U.S. Congress adopted one article of impeachment against Trump of “incitement of insurrection“, alleging that Trump incited the 6 January storming of the U.S. Capitol reports Wikipedia.)

–According to Donald Trump’s former lawyer, Michael Cohen, both Donald Trump and Rudy Giuliani know they are each in trouble with the law. Is Trump implicated in wrongdoings in the Ukraine with Rudy Giuliani and will they ever be co-defendants?

–During the impeachment of Donald Trump in the US Congress beginning  December 18, 2019, were Trump and Giuliani involved in criminal witness tampering as has been implied by some sources? 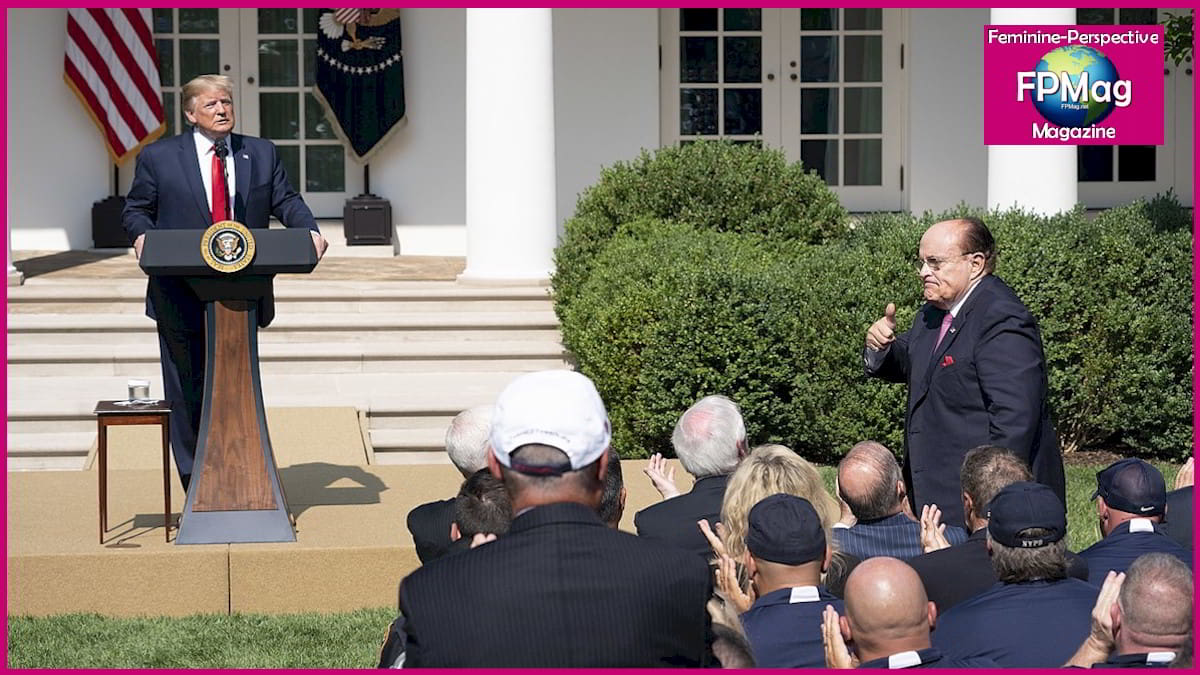 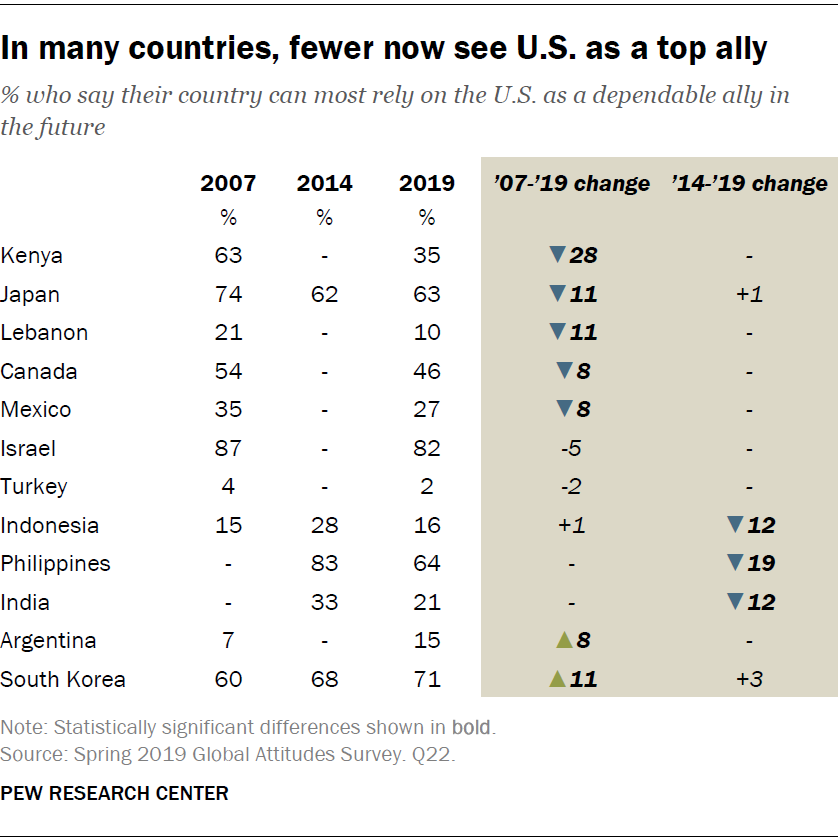 American prosecutors are mulling over many items exposed as a result of a years long investigation into the activities of Trump’s businesses before his time in public office.

At or about 6:00 AM on Wednesday, 28 April 2021, seven agents of the US Federal Bureau of Investigations (FBI) attended Mr. Giuliani’s Madison Avenue apartment as well as his Park Avenue office in Manhattan, and among other items seized a reported number of eighteen electronic devices including computers of various types and smartphones, according to prosecution court filings and a statement issued on behalf of  Mr. Giuliani who through his lawyer, Bob Campbell, complained bitterly about these events.

“The remaining seven devices belonging to Giuliani and his business cannot be fully accessed without a passcode, and as such the government has advised Giuliani’s counsel that the devices can be returned expeditiously if Giuliani were to provide the passcode. Otherwise, the government does not have a timeline for when those devices may be returned because the FBI will be attempting to access those devices without a passcode, which may take time,” said the prosecution in a court filing.

In other court records, US Federal prosecutors requested and apparently got a special “master”, a trusted person appointed by a judge to review the material seized from Giuliani and make certain that the prosecutors do not see or expose communications that would be considered “client-attorney privileged“.

“Rudy Giuliani knows that he is in big trouble,” said Michael Cohen to MSNBC’s Ari Melber on 29 April 2021. Mr. Cohen is a former lawyer to Donald Trump.

“Donald Trump didn’t care about Rudy Giuliani until Rudy was doing free legal work for him,” continued Mr. Cohen as the interview drew to a close. “And Rudy didn’t care much about Donald Trump until such time as Rudy needed Donald ‘s power and the office of the Presidency in order to drum up business—so there is no loyalty between the two—Rudy will do what Rudy needs to do in order to protect himself.” 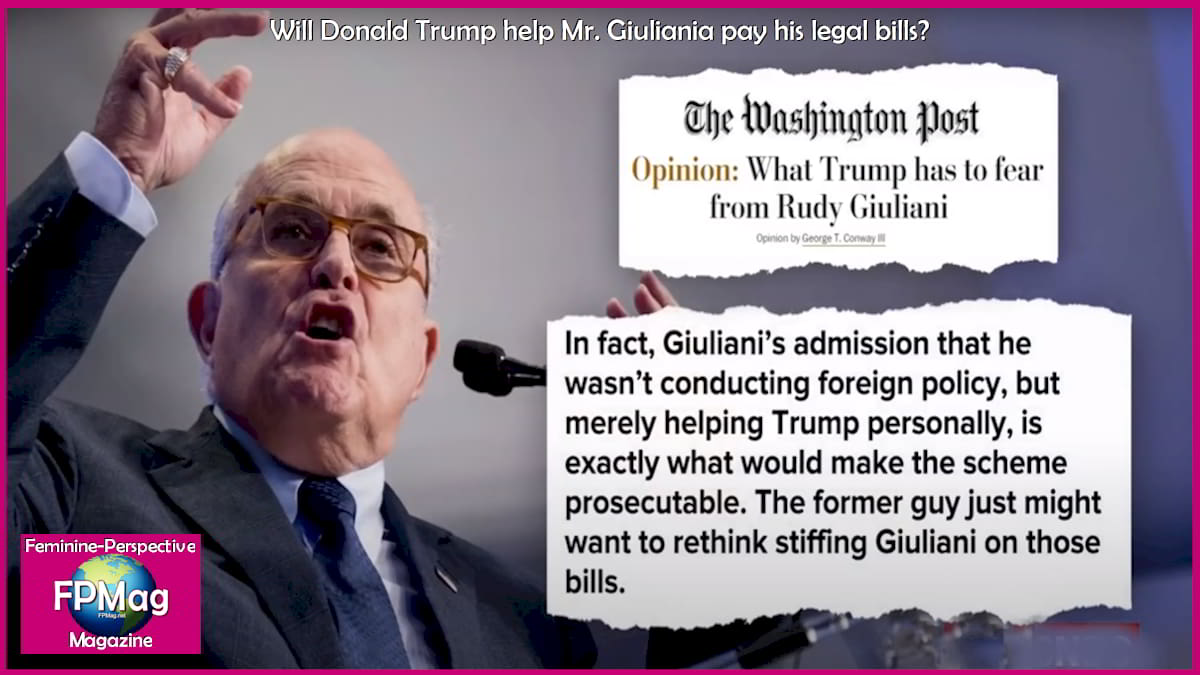 Will Donald Trump Help Mr. Giuliani pay his enormous legal bills?  This is a partial screen capture from MSNBC which has covered the Trump/Giuliani matter extensively on  MSNBC’s “The Beat with Ari Melber”, a news show covering politics, law and culture airing nightly at 6pm ET on MSNBC. thebeatwithari.com. The graphic refers to an Op-Ed in the Washington Post by George Conway which is also worth reading.  Art/Cropping/Enhancement: Rosa Yamamoto / FPMag

Mr. Cohen believes Trump is in big trouble. He says he will likely be a witness at Trump’s trial, if there is one.

Cohen refers to investigations into Trump’s tax affairs and other matters.

One of the people Michael Cohen talks about often is Allen Weisselberg whom Cohen says knows everything about Donald Trump’s tax shenanigans. Cohen says he has never seen anything of Trump’s tax documents himself.

How many people close to the former US President Trump have been arrested, charged and convicted of crimes?

How many of these names do you remember? How many will we all be hearing about again in the coming months, related to prosecutions against Mr. Trump or his companies?