At the UN Security Council meeting convened on Sunday, Jordanian Foreign Minister Ayman Safadi said that, “Israel, as the existing occupation force, carries responsibility for the dangerous situation in occupied Palestinian land and what it is causing in violence, killings, destruction and suffering.” 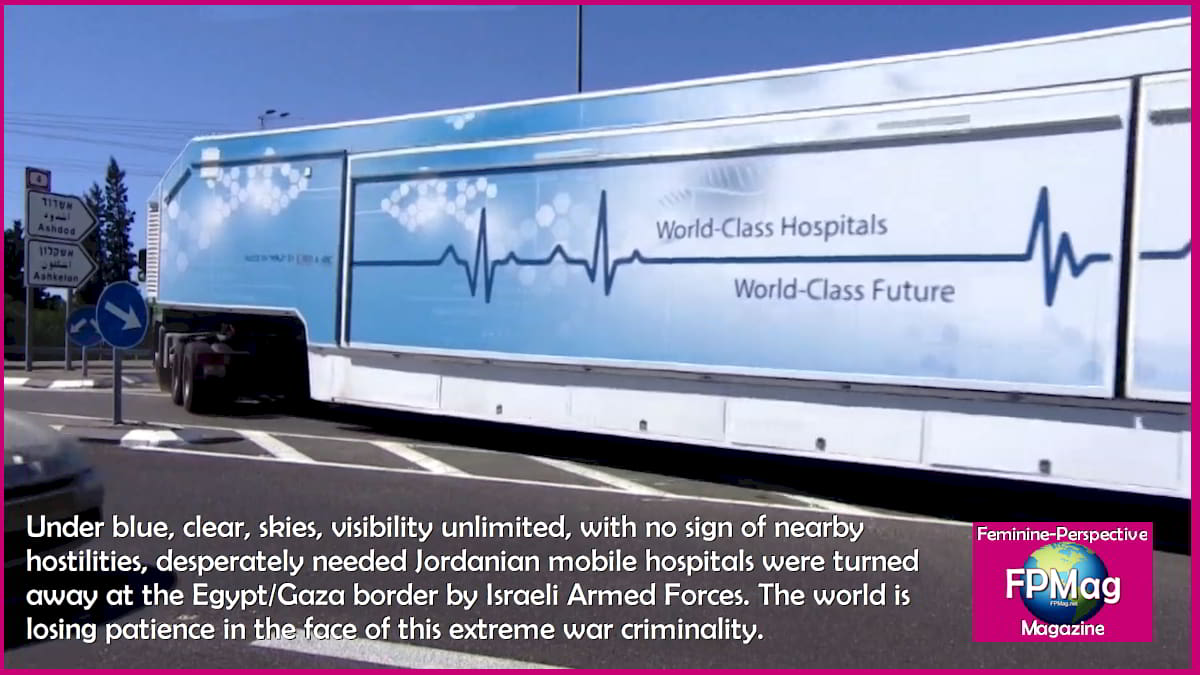 In the midst of blue, clear skies, visibility unlimited, with no sign of hostilities, desperately needed Jordanian mobile hospitals were turned away at the Egypt/Gaza border by Israeli Armed Forces. The world is losing patience in the face of this extreme criminality. Photo Credit: Melissa Hemingway/FPMag

“Israel has launched aerial attacks against hospitals, bombed journalists, killed doctors, slaughtered hundreds of women and children in their homes, bombed humanitarian aid organizations like The Red Cross / Red Crescent, and these crimes should be tolerated by the human race? Really? We are all next if we accept this. Doesn’t Netanyahu fear the consequences?,” asks Dr. Buni in Syria’s Deir Ezzor region.

“Benjamin Netanyahu has a foolish old doddering benefactor in Joe Biden, encouraging Netanyahu’s crimes to help Netanyahu stay in control of Israel. America’s veto power at the United Nations Security Council has bailed Netanyahu out three times, despite the extreme measure of the criminality, and Biden has publicly cheered Netanyahu onwards and urged American allies like the UK to do the same,” suggests Simon Baldock, an Israeli security analyst currently working in Jerusalem studying property claims that comprise Israeli ethnic-cleansing of East Jerusalem.

Is Biden’s promising to militarily back up the fractured Israeli government no matter what comes next, deterring a protection force being sent to Palestine by the Islamic Bloc?

“To answer the first question, a bank robber who has already killed 6 people inside the big bank he is robbing, now facing a noose if caught, will not hesitate to make it a full dozen murders in order to shoot his way out, killing six more,” answers Simon. “It will still be the same penalty no matter how many he kills. A narcissist like Netanyahu who has come to believe he is impervious  to consequences will say and do anything to stay in power and stay out of prison. He currently has all the mechanics of a well-armed state to do his crimes with.”

“Benjamin Netanyahu faces multiple accusations of war crimes and crimes against humanity that have gone past the examination stage within the International Criminal Court system and well into the investigatory stage. Not only that is true, Netanyahu is facing several de facto life sentences for alleged serious crimes he has been indicted for by the Israeli Attorney General,” Mr. Baldock added.

Appealing to the allegedly crooked and apparently criminal—based on Tuesday’s bloodshed and turning away of Jordanian mobile hospitals coming to the aid of thousands of injured Palestinians and tens of thousands of displaced civilians—former Prime Minister of Israel, reasoning on the basis of morality,  is a waste of effort?

“Yes. Think of the bank robber. Remember Joe Biden’s remarks and the American talking points pushed to its allies. “Israel has the right to defend itself”. From what? A handful of downtrodden, hungry, thirsty, abused, untrained Palestinian boys starving in the dark?”

“Unless the Islamic Bloc of nations, maybe led by Turkey, does something soon, to quash Israel’s apartheid and protect Palestine, it will unfold into the worst imaginable human catastrophe of our time, a genocide pushed since the 1970s by America. Israel is a puppet. Netanyahu is a former puppet long out of control. But America, the puppet-master, the one we all knew, is gone forever. America has lost all standing, all credibility. It is a selfish, self-serving empire run by Hollywood-dreams and social media monsters.

The Palestinians need to be armed commensurate with their Enemy.

“Whatever it takes to stabilize this region must be done,” suggests Baldock. “Governance of Israel needs to change hands. Sometimes war is necessary but this lopsided war is nothing but a bloody genocide or apartheid-slaughter depending on the outcome and how one looks at the outcome. Somebody needs to take the side of the Palestinians and arm them commensurate with the threat.”

King Abdullah II of Jordan, “affirms that there are intensive efforts and contacts with all international actors to stop the dangerous Israeli escalation and protect the lives and property of the Palestinian brothers,” a statement from the Royal Court said on the weekend.

But on Tuesday and through the night, Wednesday morning, more civilian slaughters took place.

“Everyone seems to be buying time for Israel to kill everyone in Gaza,” says Dr. Nassima al Amouri in Gaza, sarcastically, or maybe not.

“Israel needs to be led by a stable government capable of dragging the nation from an apartheid mentality. Who will make that happen is the big question. Be honest. The human race is sick of Netanyahu’s constant murders. It is a one-sided apartheid massacre perpetuating under the UN which created this experiment 75 years ago.

“Turkey, Russia, Egypt and China with allies, are capable of making that happen as a police action, or even a protection force,  before Syria and Iran go it together, as they are right now discussing, and that would be a huge mess.

“The way this is going now, the Palestinians having nothing to lose, will continue to fight, unled, until the last woman and child is killed by Netanyahu’s bombing and missiles, and that will end the Palestinian race, as Netanyahu has planned.”