On Thursday the ‘heartbreaking’ discovery of a mass grave of 215 children, “probably murdered”, youngest being 3-years-old, by the Tk’emlups te Secwépemc people, shocked the entire world.

When asked about her article and public statement demanding disbandment of the Canadian RCMP,  published on the RINJ Foundation web site (“RINJ Women seek Disbandment of Canadian RCMP over Residential School Murders“), Geraldine Frisque explained that the Royal Canadian Mounted Police (RCMP) were the “enforcers” for the Canadian Government’s residential school system.

Ms. Frisque says she and her colleagues believe the mass grave at the Kamloops “Indian Residential School” site were murder cases. Regardless of what forensic evidence may reveal, we want the RCMP disbanded and replaced by a gender equal national police force that is guided and governed by more modern thinking on human rights. Some provinces may want to opt out and use the money they have paid to the former RCMP to construct their own provincial law enforcement team, like the provinces of Quebec and Ontario have already done.”

Video: “Indian Residential Schools” Former students speak about experiences. They didn’t keep track of students who died or why they died.

“Death from persistent abuse, is murder, as far as our organization is concerned,” says Katie Alsop of the RINJ Foundation.

Kamloops Site may open a Pandora’s box: a new search for mass graves at up to 100 other sites that have been rumoured for decades.

“This Kamloops site was the largest school in the system, and there were many rumours of mass murders heard while interviewing possible witnesses about missing indigenous girls and women over the past eleven years,” Geraldine Frisque said. “These women are loved, cherished and missed by their families,” she added.

“We had a knowing in our community that we were able to verify. To our knowledge, these missing children are undocumented deaths,” said Rosanne Casimir, chief of the Tk’emlúps te Secwépemc, in a published written statement.

Despite RCMP propaganda setting out the contrary view, anecdotal accounts by former students claim horrid abuses by the RCMP members, says Katie Alsop, a founding director of the RINJ group and one of the original investigators into missing and murdered aboriginal girls.

Canada’s “Residential School” system employed the RCMP to forcibly remove indigenous children from their families, in a “cultural genocide”, according to a report from a 6-year federal government investigation ending in 2015. It is remembered every 5 May known as “Red Dress Day“:

“Each one is “a visual reminder of the staggering number of women who are no longer with us,” Black said in a statement to the University of British Columbia (UBC).

“The Catholic Church through all that time famous for raping children was the Canadian racist organization that for the most part saw the kids daily, and abused the children daily,  but it was the RCMP that served as the ‘enforcers’,” said Ms. Frisque. “The stories of violence we have heard about male members conduct are heartbreaking,” she continued.

“Nothing has stopped the Catholic Church clergy raping kids but not enough guilty clergy are going to prison. We of RINJ Women do our best to make that happen.

“Far too many offenders are out and about, living beside playgrounds and schools,” she added.

“Our concern within the RINJ hierarchy is that the one abusive organization that Canadians can do something about, the RCMP, still operates in the same patriarchal, racist, misogynistic manner creating a toxic and hateful culture. It is every day facing criminal and civil trials for raping its own women members,” she added.

“This infamous school system which operated from 1874 through 1996 sought to assimilate indigenous Canadians by of all things isolating 150,000 children in residential schools run by archaic Anglo Christian institutions with children having no contact with the outside world except teachers and RCMP members who dragged them there,” added Ms. Frisque.

“How can any so-called law-enforcement group bound to serve and protect communities, drag children away from their families to such a horrible fate? How can this be?”

RINJ has published its list of active cases of missing indigenous girls and women here. 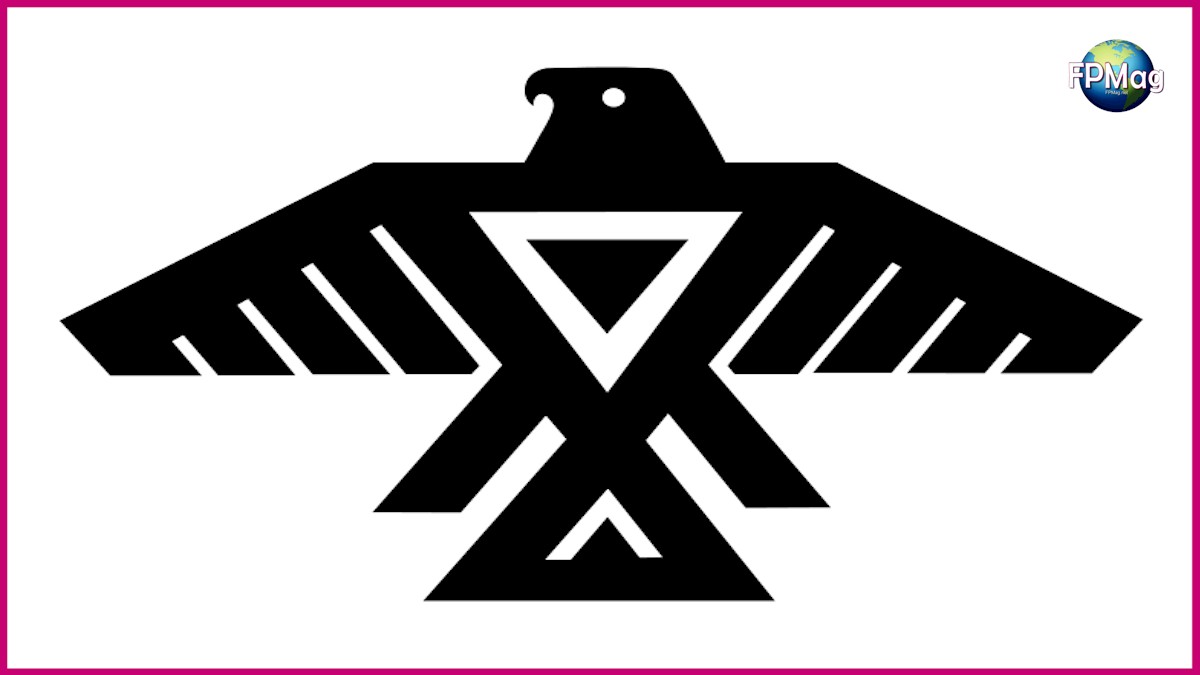 What does ‘assimilate’ mean in the case of the so-called “Indian Residential School” system?

“Force the ‘Indian’ out of the child,” Danielle Morrison, lawyer for the Anishinaabe tribes, told al Jazeera.

Explains Ms. Frisque, “Anishinaabe is often mistaken for a synonym of Ojibwe, however it refers to a large culturally similar group of tribes, all of whom we have spoken to over the years.” 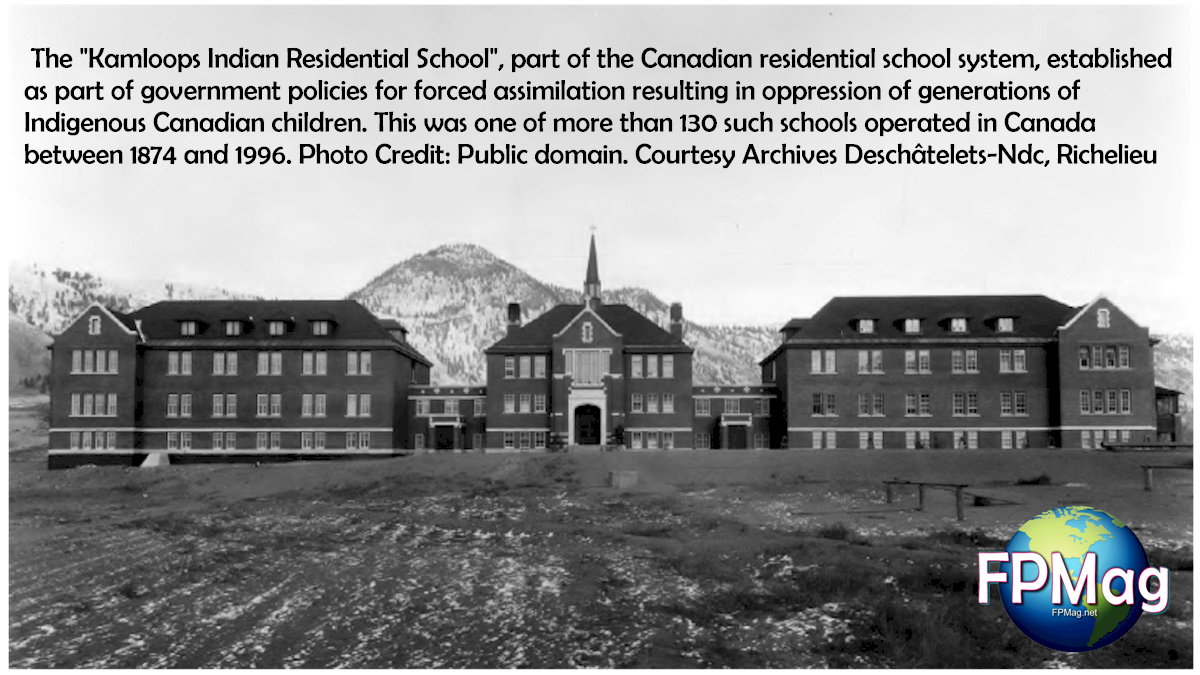 The “Kamloops Indian Residential School” as it was named, where 215 children’s remains were found as a result of special equipment used by the The Tk’emlúps te Secwépemc First Nation community. This Kamloops school was part of the Canadian residential school system, established as part of government policies for forced assimilation resulting in oppression of generations of Indigenous Canadian children. This was one of more than 130 such schools operated in Canada between 1874 and 1996. Photo Credit: Public domain. Courtesy Archives Deschâtelets-Ndc, Richelieu via RINJ Foundation Art/Cropping/Enhancement: Rosa Yamamoto FPMag

“While the guilt for such crimes belongs to many partners in these ‘Residential Schools”, the primary institution responsible for enforcement and the violence it took to force the children into these schools lies with the Royal Canadian Mounted Police (RCMP).  Yes, they still ride horses and have a few muskets but only for ceremonial purposes but their way of thinking goes back even before the 1800s when their militaristic patriarchal types were prolific. They were then and are now a racist, misogynistic patriarch that hates women and hates non-whites,” said Frisque. 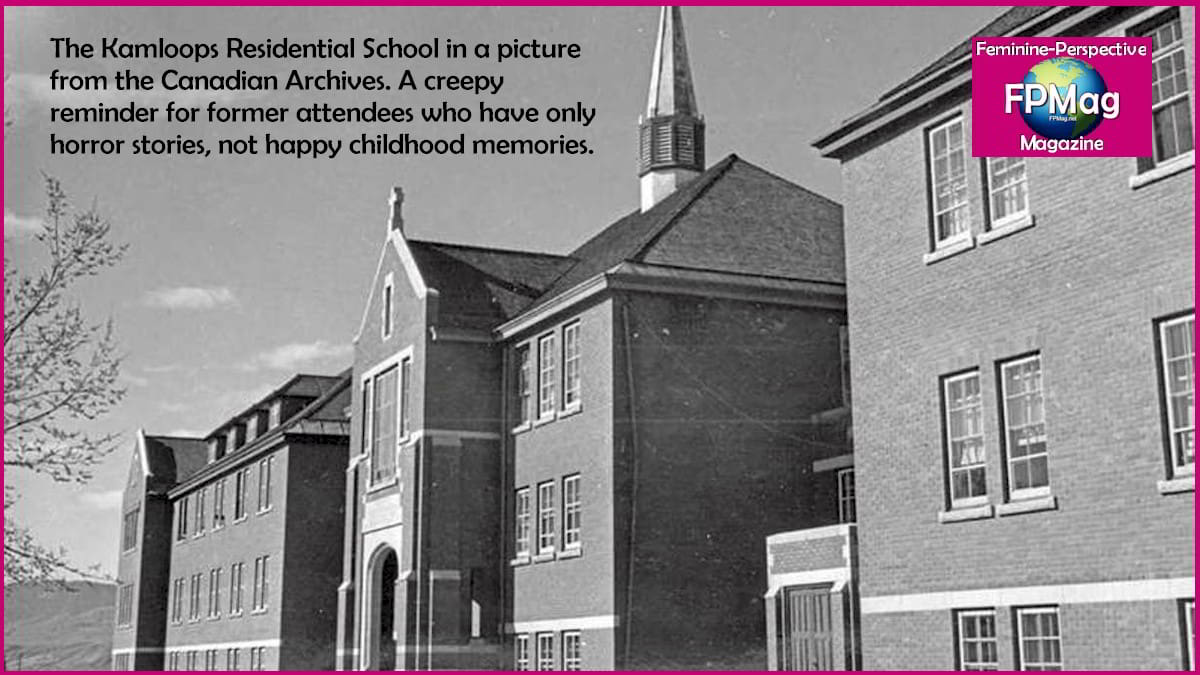 The Kamloops Residential School in a picture from the Canadian Archives. A creepy reminder for former attendees who have only horror stories, not happy childhood memories. Photo Credit: Canadian Archives. Art/Cropping/Enhancement: Rosa Yamamoto / FPMag