It has been a Bloody Tuesday in Palestine with some of the worst war crimes against medical crews and civilians including children ever perpetrated by an American ally.

Violence across the occupied Palestine territories as well as mixed communities in Bethlehem, Jerusalem and other cities, erupted into violence as Tuesday wore on. Marches that were supposed to be family events broke down under live combat arms fire from Israeli troops. All of the violence is producing hundreds of casualties, among them many deaths according to medical workers.

One nurse said to another medical worker just coming into work, “It was a day of feeling that life is not worth living, let alone saving,” cried an exasperated nurse who was so tired from a 22-hour-shift that she curled up in a corner of a hospital ward beside a mop and pail and went immediately to sleep, explained her colleague starting her duty shift.

Speaking to medical sources in the occupied Palestine territories, FPMag was told that the Gaza medical community has lost due to Israeli air attacks, two senior MDs, a neurologist and the head of internal medicine at Gaza’s largest hospital;  that the laboratories in Gaza City which had been completing COVID-19 tests were all damaged or destroyed; that the Qatar Red Crescent clinic had last night (local time) been decimated; that USAid offices were shut; and The Nurses Without Borders living quarters near the USAid office have all been shut down by bombing.

According to one nurse, they were sleeping in hospital corridors for an hour here and there and working 20-hours in some few cases, but they have lost their personal gear.

by Behar Abbasi with Micheal John 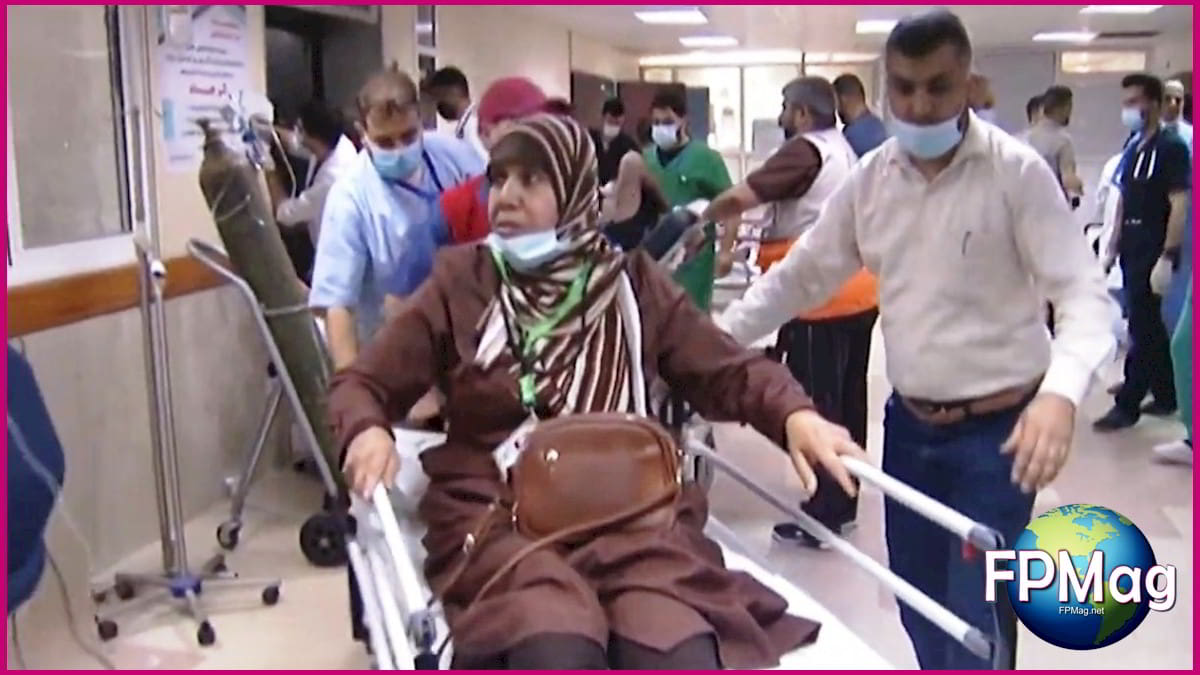 Director of QRCS in Gaza, Mr. Akram Nassar said in a tweet, “Major destruction has been done in our office as a result of Israeli warplanes targeting two floors of the same building, opposite to the ministry of health in the Ghazi Al Shawa building.”

Dr. Nassima al Amouri in Gaza tells FPMag via Signal app that, “Palestinians and Israelis are all urged to wear double masks at all times. Public Health in the Gaza strip is near shut-down for the time being as all pathways for consumable medical supplies, pharmacology, whole blood, and emergency services have been shut down. We are hoping that changes by getting the word out,” she said.

“We are going to get through this, somehow. I am going back to basic WWII medicine. We are saving the lives that we can save and doing everything possible to acquire more supplies. We are hospitals without hospital supplies. Neighbours have brought pillows, blankets, food and even OTC meds they have collected, but we need all medical supplies. PPE and everything one needs to start an IV and dress a wound or do a dressing change—we need it all.” 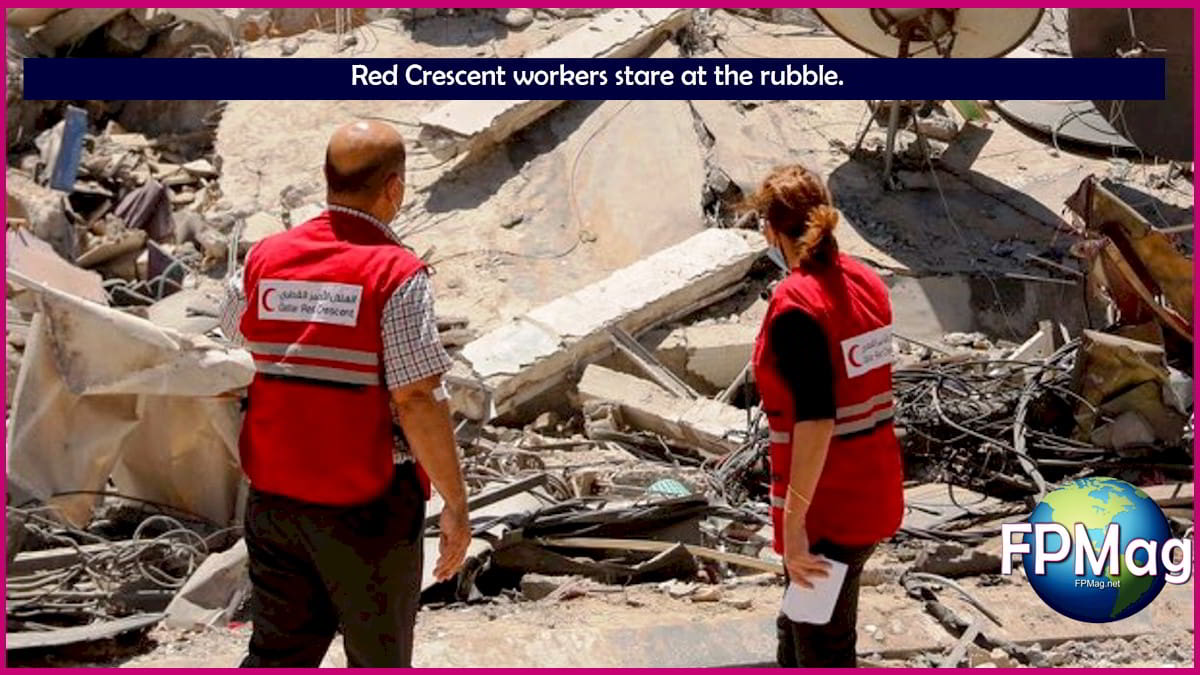 In a statement, Qatar’s foreign minister slammed the assault on the Quatar Red Crescent HQ as a violation of international law.
“The State of Qatar expresses its strong condemnation of the Israeli occupation’s bombing of the Qatari Red Crescent Society building in the besieged Gaza Strip, which resulted in several deaths and injuries,” the statement said.
“Parallel to the attack on the Red Crescent, another operation caused damages and destruction of parts of Sheikh Hamad bin Khalifa Al Thani Hospital for Rehabilitation and Prostheses, as a result of the continuous attacks on buildings surrounding the hospital. Israel has also shamelessly bombed Al-Jalaa tower, which housed a number of media institutions, including Al-Jazeera offices in the Gaza Strip,” it added.
“The targeting of humanitarian and media institutions is a clear violation of international law, humanitarian norms and values,” the statement said, vowing Doha will “spare no effort in supporting the just Palestinian cause and the brotherly people of Palestine.”
QRCS has been working to respond to the needs of Palestinians in Gaza and the occupied territories despite mounting Israeli aggression. Cropped Photo courtesy of Red Crescent.  Art/Cropping/Enhancement: Rosa Yamamoto FPMag

The horror of “Bloody Tuesday” in Ramallah and throughout Palestine 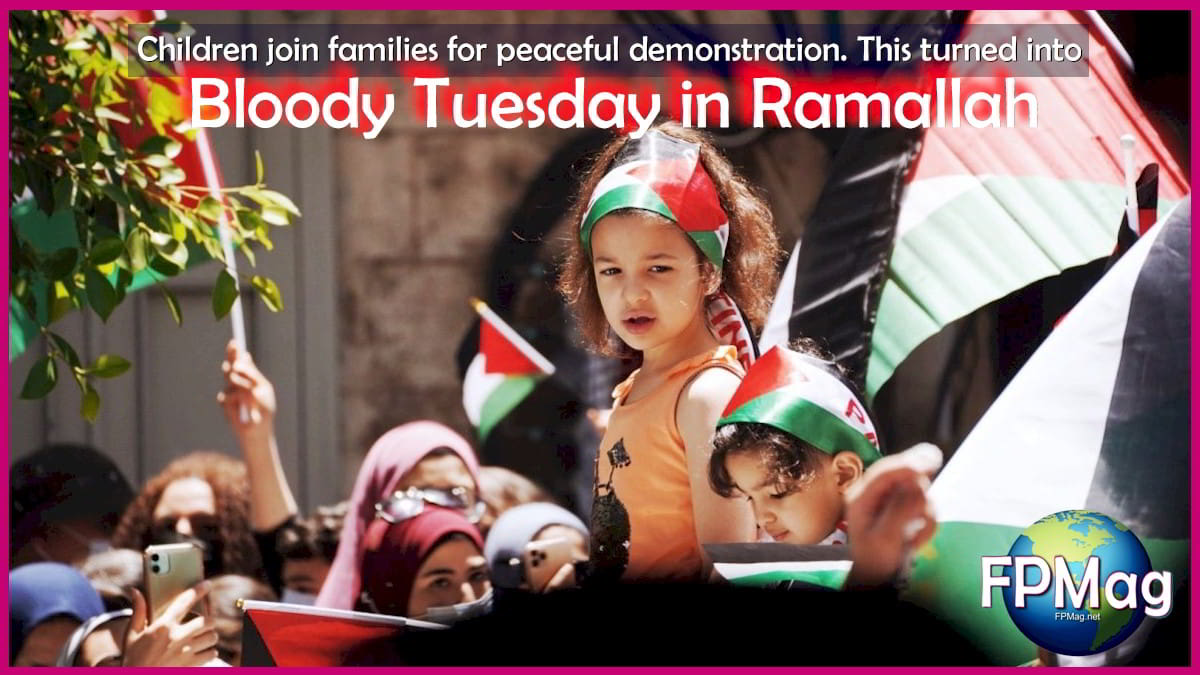 18 May 2021, Ramallah, West Bank, Palestine—Children were thought to be safe at a public, peaceful demonstration in Ramallah. It did not turn out that way as the Palestinian General Strike turned into “Bloody Tuesday” Photo Credit: Rana Nazzal Art/Cropping/Enhancement: Rosa Yamamoto FPMag 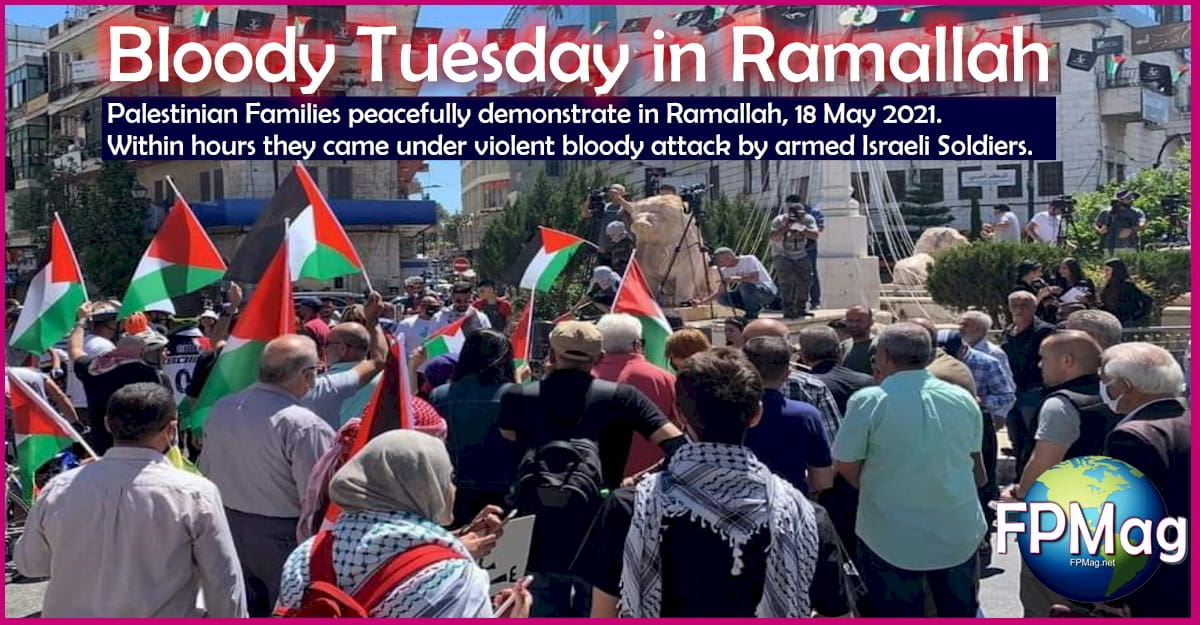 18 May 2021, Ramallah, West Bank, Palestine—Children were thought to be safe at a public, peaceful demonstration in Ramallah. They came with mom, grandma, aunties and siblings. Thay had to be rushed away home under gunfire as the day progressed. It did not turn out the way events were planned as the Palestinian General Strike turned into “Bloody Tuesday”. Photo Credit: Rana Nazzal/Ramallah, Palestine Student.  Art/Cropping/Enhancement: Rosa Yamamoto FPMag

Tuesday 18 May started with a peaceful, celebratory march through Ramallah in the West Bank to celebrate the success of the Palestinian general strike across the occupied territories.

Women and children joined grandparents and aunties on a beautiful day, in a party mood.

The tear gas made it difficult for ambulances to rescue shot Palestinians said the crews of two EMS units waiting to enter a cloud of tear gas to get closer to the patients. 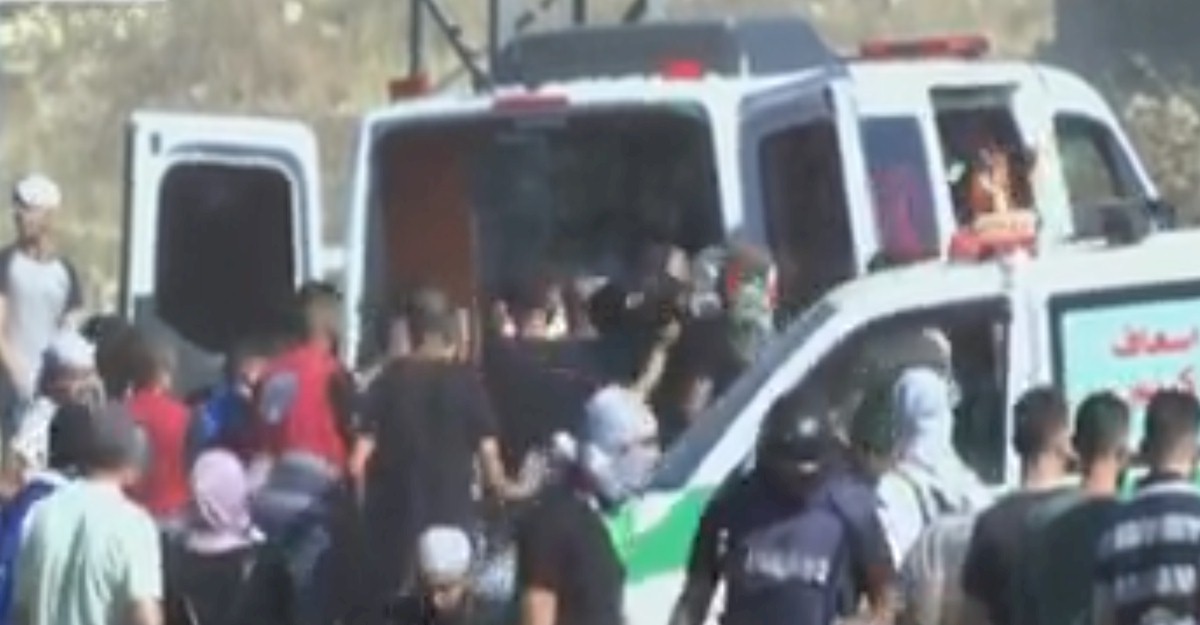 Hospitals collectively in Ramallah at 16:27 hours (4:27 PM) local time reported 22 injured Palestinians were already admitted and more were at the emergency rooms in the process of intake. Four of these patients were escalated to critical care. As the source was speaking (she is a volunteer nurse who has come from Syria a few days ago) another five ambulances left the scene of the Israeli Army chasing protestors away from Ramallah with live fire according to sources on the scene. Our nurse contact then reported an update, two persons of the 22 had perished.

Live ammunition was used all day by Israeli forces sporadically to move protestors out of the area. Shots are still being fired at this time according to sources.

According to eyewitness sources but not yet confirmed, there may have been an exchange of gunfire as a man with a gun took aim at an Israeli drone that was dropping canisters of gas on the crowds. Said one female source who is a member of the women’s humanitarian group, RINJ, “the Israeli troops that were controlling the drones began to fire on the general area of the person trying to attack the drones. He was attacking the drones in self defence while others covered their faces and ran away from the exploding gas canisters. The people running thought they were being fired at and ran faster. The person we saw who had been fired upon returned fire to the Israeli troops but had only a couple of bullets so he stopped shooting at the drones and ran.”

One source, Rana Nazzal, said, “The march moved from Ramallah to Beit El, an illegal Israeli settlement nearby. Dozens of cabs drove the crowd, refusing payment. The Israeli army started shooting live ammunition at our protest even though many kids were present.”

Children with their families likely did not expect violence. They had showed up for a peaceful demonstration. Most families were evacuated by parents well before 4:00PM local time. 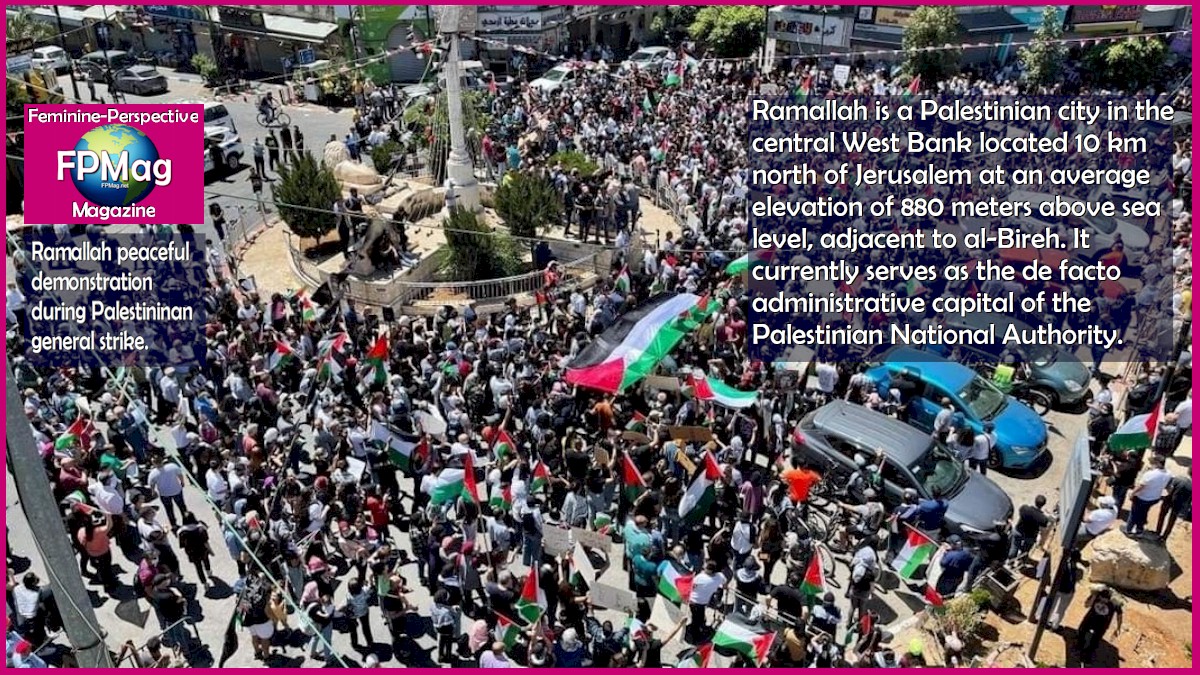