In a wide-ranging communique issued 5 May 2021, the foreign ministers of the G7 group of nations said in item eighteen of the missive, “To strengthen global cooperation on issues of concern to all we believe it is vital to ensure inclusive processes in international organizations. We support Taiwan’s meaningful participation in World Health Organisation forums and the World Health Assembly. The international community should be able to benefit from the experience of all partners, including Taiwan’s successful contribution to the tackling of the COVID-19 pandemic.” 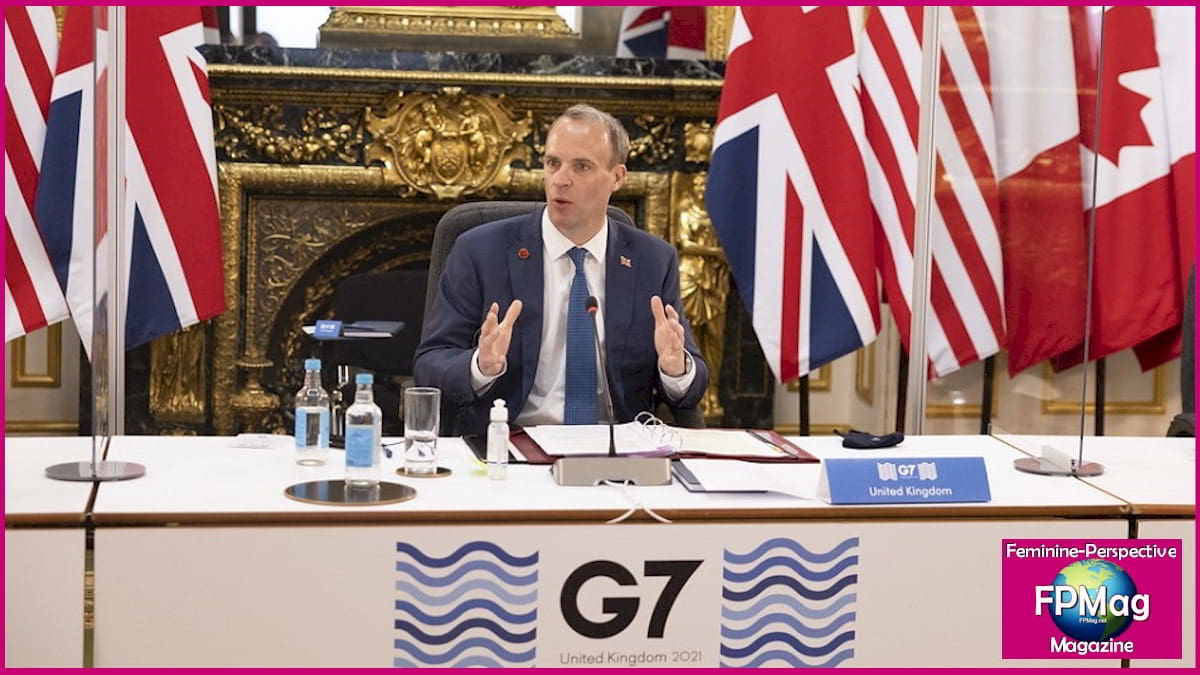 On China’s aggression in the East and South China Seas, the G7’s foreign minister’s communique says in item 25, “We remain seriously concerned about the situation in and around the East and South China Seas. We underscore the importance of peace and stability across the Taiwan Strait, and encourage the peaceful resolution of cross-Strait issues. We reiterate our strong opposition to any unilateral actions that could escalate tensions and undermine regional stability and the international rules-based order and express serious concerns about reports of militarization, coercion, and intimidation in the region. We emphasize the universal and unified character of the United Nations Convention on the Law of the Sea (UNCLOS) and reaffirm UNCLOS’s important role in setting out the legal framework that governs all activities in the ocean and the seas. We consider the 12 July 2016 award rendered by the Arbitral Tribunal under UNCLOS as a significant milestone and a useful basis for peacefully resolving disputes in the South China Sea.”

Read the referenced documents if you wish:

Some members of the G7 helped stir up riots in Hong Kong and now criticize Beijing’s Response.

The G7 foreign ministers cut China on last year’s situation in Hong Kong, which could not be more disingenuous coming from a platform in London England where much subterfuge was planned and ordered.

FPMag has interviewed several sources in the HK resistance and additionally others among proponents of the student demonstrators including British and American antagonists. Both sides say both sides were well represented among the students as fifth columnists stirring up trouble from either side.

Without any doubt whatsoever, it can be said, having met them face-to-face  that British and American instigators stirred up trouble in Hong Kong and now their leaders are pushing allies to rail about China’s reaction.

The city of Hong Kong was being destroyed and finally China stepped in and managed to calm the breaches of the peace.

Instigators made life for Carrie Lam, the chief executive of the Hong Kong Special Administrative Region, a living hell, despite her calm and effective style under incredibly difficult circumstances.

Carrie Lam showed determined resolve with a calming disposition. She  appeared to perform her duties admirably despite massive foreign interference. 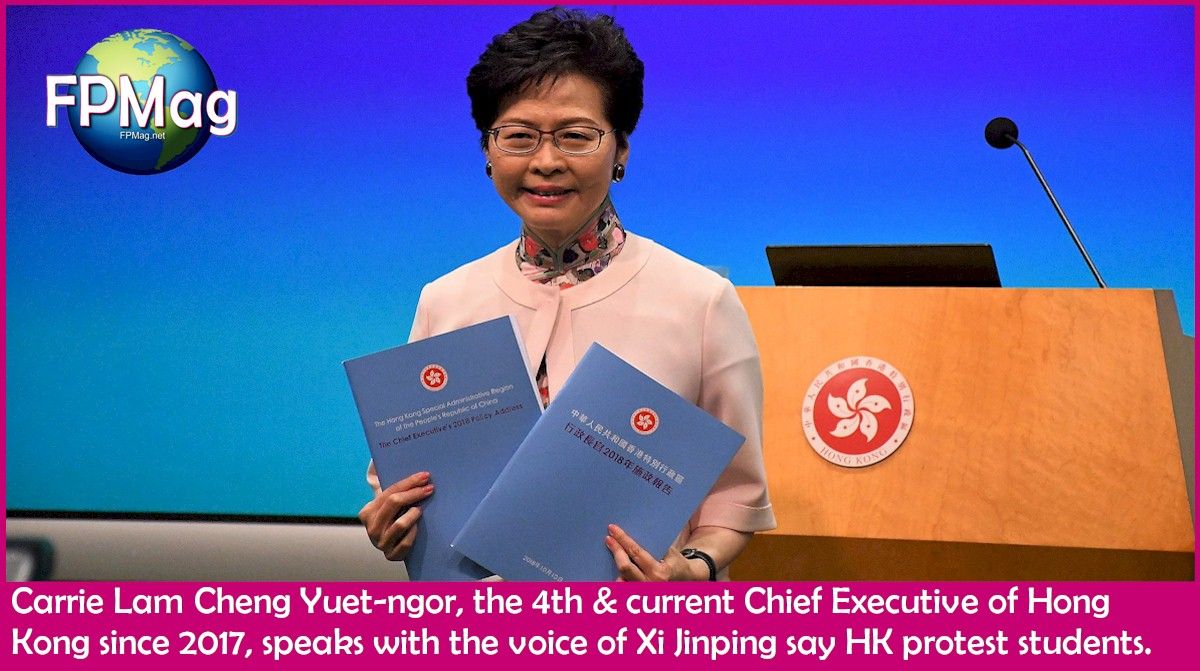 There are two sides at least to every story but the one prevailing criteria for a good outcome is maintaining the peace which China was finally able to accomplish despite outside interference. Meanwhile the violence on the streets drove many businesses and countless hundreds of families out of Hong Kong where they had previously lived happily for decades.  The West was successful in crippling Hong Kong’s economy and destroying the two-system status.

The comments of the G7 Foreign Ministers on the Hong Kong situation are gratuitous and dishonest.

Attacks against China sans specific data on alleged human rights violations and abuses in Xinjiang and in Tibet, especially the targeting of Uyghurs, members of other ethnic and religious minority groups, and the existence of a large-scale network of “political re-education” camps, and reports of forced labour systems and forced sterilization, are political claptrap.

Once the Five Eyes started yakking about their new ENEMY (because the Five Eyes would be  o v e r  without one) and plan a coup wherein they kidnap a 5’4″ woman future CEO of the tech-giant Huawei, all the wannabes try hard to come up with choir-joining acidic language with which to attack the new ENEMY.

That is, all except New Zealand which is rumoured to want to extract itself from the absurd group of Sky-Is-Falling Five Eyes doom-sayers.

References to the twenty-first Shang king of the Shang dynasty of China is found in texts written 1250 years BC among the most ancient scrolls archaeologists have ever found.

That would indicate that China as a structured society has been around for some 4,000 years and probably more. In all that time, the Chinese have done plenty to advance the causes of the human race. It was that way before the racists among the Five Eyes came into being and long after they are gone. Racism has no place in a multicultural global society which is how Earth is today, like it or not.

The security communities‘ pretentious liars who claim ridiculous concerns in order to bolster their budgets are nothing more than a collection of racist Charlatans thinks many officials in Auckland. It fits, because they are racist Charlatans who claim an exclusive Anglo-club membership.

“And since when does having money entitle a country to pass moral judgment as a black pot calling a kettle black. This is racist, condescending arrogance and no more. Nothing has been resolved in Myanmar. Vaccine nationalism only grows, thus far, and the problem in India is going to set back the gains made all over the world. The G7 communique has no more worth than a depleted, shrunken balloon with only a little air left,” added Simon.

The milquetoast statement about Taiwan by the G7 foreign ministers is straightforward and arguably limited by fear of China’s reaction. Taiwan needs to be sitting in its own seat at the UN and that is what needs to be said.

China has given its compulsory roar in return.

Hysterical fanaticism  is very much behind the Communist Party of China’s (CCP) doctrine on the South China Sea’s Nine-Dash-Line and the status of Taiwan. It is unfortunate because the thoughtless monsters in the CCP are starving tens of thousands of hungry fisher folk in countries all around the South China Sea at a time when human compassion is called for, not aggression against ordinary women and children plus their hungry families.

Even a quick study of history indicates that the People’s Republic of China has absolutely no legitimate claim to ownership of the South China Sea and Taiwan.

The People’s Republic of China owns mainland China. Taiwan is an independent self-governing state with its own unique ethnicity, monetary (dollar) system and unique cultural heritage. The world at large needs to recognize that loudly.

We the people have had enough of jackasses like the Daesh coming forward with swords claiming “we own it all now”. That’s what China is doing.

The CCP at some point became terrorists like the Daesh (ISIS) which Beijing says it is curbing with cultural fanaticism against the Uyghurs. Which one is the worst terrorist?

The Taiwan ownership claim of China is on a par in stupidity with the so-called nine-dash-line and the claptrap that comes out of the American leadership of the Five Eyes. Chiang Kai-shek is likely laughing from the grave at the perpetuation of frivolous rhetoric by both sides.

China has fanatically invaded Taiwan’s sovereign airspace nearly three hundred times in recent months with everything from fighter aircraft to monstrous nuclear bombers according to the Taiwan Foreign Ministry plus several US military sources.

This is all about the culture of the CCP and its hatred for its ultimately successful nemesis, Chiang Kai-shek, who befriended Dwight Eisenhower and took America’s side in the Korean War. Xi Jinping needs to get over it all.

Chiang Kai-shek had by 1975 built Taiwan into the incipient success it has become in recent years and rolled it into the most remarkable independent democracy in the region.

In all of that, despite his tumultuous years with the National Party, Chiang Kai-shek proved that communism does not work and that democracy that serves the intuition and will of the people is the way ahead. That maybe why Xi Jinping clings to illogical arguments with fanatical hysteria to rid the history books of that conclusion.

China’s hysterical CCP leadership hence wants to stomp Taiwan like a bug, not take ownership of the independent nation. The world needs to step up and stand behind Taiwan—at its seat at the United Nations General Assembly.

Nobody today goes to war knowing they will kill a few million of their countrymen over pure hysteria. This seems to be Xi Jinping’s Achilles Heel: fanatical nonsense doctrine rooted in hatred, not historical fact.

Philosophers can argue until the cows come home whether communism works or not but nobody will take the side of hysterical fanaticism which is all that is backing China’s most outrageous claims like ownership of the South China Sea and ownership of Taiwan.

Taiwan needs to take its seat at the United Nations, and hopefully some of  Tsai Ing-wen’s pure moxie will rub off on that patriarch.

Watch Video: A country’s most precious asset is the trust of the people.