Comment: Israel and America created Hamas as a straw dog.

The words of Ambassador Linda Thomas-Greenfield today at the United Nations Security Council were cautious, offering nothing, bowing out, a slight change in tone from cheering Israel’s ethnic cleansing last Wednesday.

Speaking of ‘cheering’, the world has changed and America’s blatant racism is no longer being cheered. It’s repulsive.

Hamas is a scapegoat group on which America and Israel dump their racist evilness. “Look at the rockets. Rockets. Hamas Rockets. Look at the rockets.” But one sees nothing more than pyrotechnics compared to the tons of high explosives with which the Israelis bomb Palestinian homes, schools, media buildings and apartment buildings in Gaza City right down to the flat ground.

Joe Biden’s script writers may be creating content to sway the 75-95 IQ credulous Islam-hating Americans but from his recent speeches on the topic, Biden seems to be a member of that group. He believes his own shite. 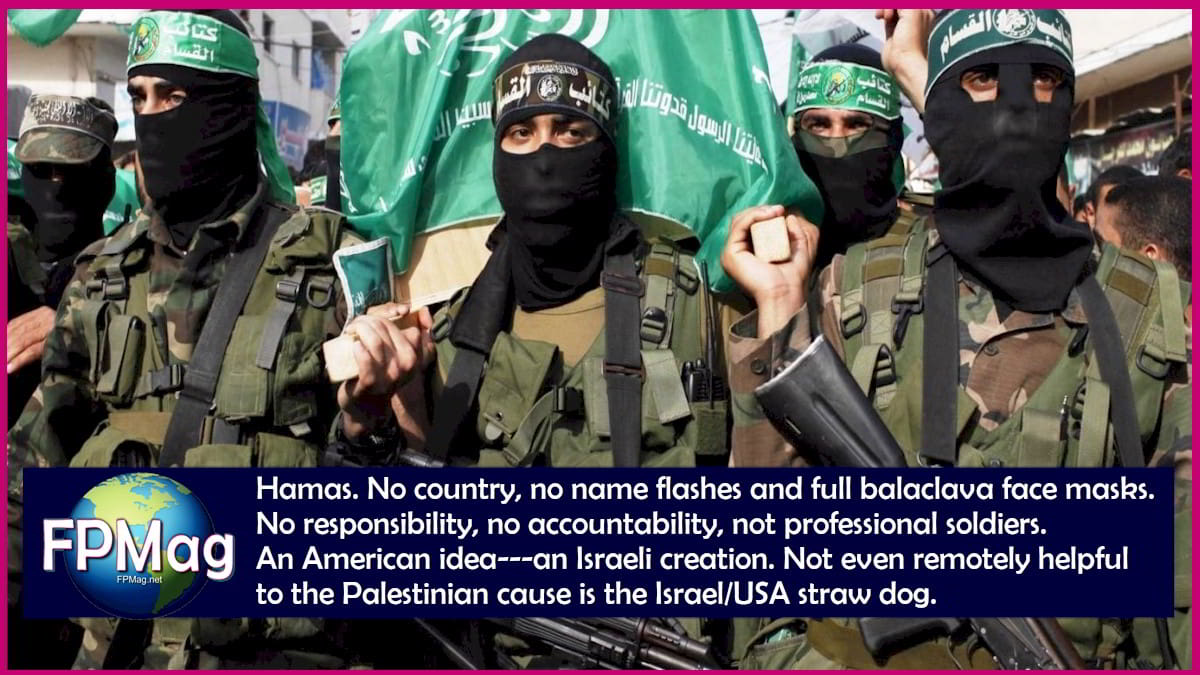 Hamas. No country, no name flashes and full balaclava face masks.
No responsibility, no accountability, not professional soldiers.
An American idea—an Israeli creation. Not even remotely helpful
to the Palestinian cause is the Israel/USA straw dog. Photo Courtesy TheReaperTeam Art/Cropping/Enhancement: Rosa Yamamoto FPMag

Israel with America’s support wants to eliminate the Palestinian ‘problem’ by eliminating Palestine. America moved its Embassy to Jerusalem and declared Jerusalem the capitol of Israel despite the fact that the East Jerusalem half of the city is occupied Palestine territory and not Israel’s or America’s territory to reassign.

In the past seven days Israel is attacking Palestinians, not so much Hamas, which so-called terrorist group gives Israel an excuse for attacking Palestinians in its apartheid regime, ridding itself of Palestine, and why Israel created Hamas at America’s suggestion. America has used the same tactics all over the world. That’s how America got child soldiers in Syria to fight ISIS. America created and trained Abu Sayyaf. ISIS. Same thing, different surrogate reasoning. All bad endings.

Israel blames the scapegoat Hamas and then by attacking, dissing or destroying Hamas as they continue the destruction of Palestine by killing Palestinians or just ousting them from East Jerusalem, they externalize the scapegoat to feel free of being sinful for attacking Palestinians. It’s because of Hamas. It’s Hamas fault. But Israel and America created Hamas. Benjamin Netenyahu doesn’t refer to the days killings of Palestinians, he just vows to hunt down Hamas, his friends, wherever they may be. Then Hamas shows how bad they are by launching more firecracker rockets and Israel shoots them down with its Iron Dome defence system.

Listen carefully to Netanyahu’s stories. It’s all about Hamas, but they are killing Palestinians in massive numbers.

Hatred for Palestinian Arabs in the occupied territories and the mixed communities inside Israel among the right-wing extremist whack-jobs in the Knesset is as strong as America’s pervasive hatred for blacks and now its growing hatred for Chinese Asians thanks to Trump and Biden’s stupid war on China because China is better than America.

Who is Israel really attacking? Palestinians? These children represent the facts. As the sun went down today in Gaza, 8 Israelis had been killed over 7 days; 200 Palestinians had died over the same period, of whom 54 deaths were children and 35 deaths were mothers all killed in their homes. Not Hamas. Only one surviving infant of the Abu Hatab and al-Hadidi families who had sheltered in a residence at the Shati refugee camp in Gaza as bombs fell 15 May 2021. Here, two women and eight children are prepared for burial. This is who Israel is killing.

America is a white supremacist nation. It is joined by Britain, Australia, Canada and Israel. These countries are endorsing Apartheid over the Palestinians. East Jerusalem is a classic example. Self-observation is needed.

These are truths the parties need to realize and address. It’s a culture dating far back in time. Maybe it would be better for these of Israel’s allies to apologize and make recompense for their mistreatment of Jews during WWII than to just blindly look the other way as Israeli Jews today become the modern day oppressors. They say abused kids later become the abusers. Is that it?

In any case, racism within a globalized Earth, fighting climate change and pandemics in a unified manner, is not going to work out.

Only love and care for one another has any hope of saving the human race.

Racism in these Anglo countries is so bad that their social media is full of blatant racist slurs against Arabs and any effort to tell both sides of the story is censored by the American social media platforms and by American munitions used by Israeli soldiers to destroy media buildings. The world is scarred by this shit and journalists are even more encouraged to hunt for and expose the misdeeds of ‘a$$holes’—the street vernacular for DSM-V defined personality-disordered pariahs and ICC/UN/Media-alleged criminals like Trump, Netanyahu, Bolsonaro, Modi, Duterte, et al.

America’s calling Hamas an Islamic Terrorist Group is a stretch because Hamas only operates in Gaza as a quasi-elected authority and only in a defensive mode while Israel acts as the terrorist by oppressing the Palestinians and by creating Hamas and foisting those screwballs on Gaza. There is not an iota of legitimacy around the table with the exception of the hapless victims, the Palestinians.

This young lady in this quasi-propaganda video may be representative of the entire population of Palestinians. Maybe she is also emblematic of the people participating in the United Nations Security Council virtual meeting. “What the hell are we supposed to do?”

The kid is right. The hopelessly betrayed, brainwashed, dislocated, beaten, and oppressed Palestinians are so chaotic they don’t stand a snowball’s chance in hell of solving their own problems collectively because they are barely subsisting, trying to eat, sleep, breathe and stay alive.

“Remember that Hamas is a terrorist group,” is the disingenuous argument of the White House  to support the mass murder of 200 Palestinians versus 8 Israeli deaths which is the ratio of a dozen previous conflicts over the past 75 years.

Israel in its loathing of Arabs and denial of allegations itself is the creator of Hamas at arms length, labelled the Hamas scapegoat group an Islamic terrorist group.

Europe has condemned Hamas, but not unanimously, failing to adopt its own policy, followed the US in its alliance with Israel and hatred for Hamas.

America pays Israel 3-4 billion dollars a year for Israel to fight Hamas, but Hamas is no more than a scapegoat used to justify the killing of children and women in their homes in their sleep time after time.

Yasser Arafat’s Palestine Liberation Organization (PLO) was loathed by Israel. Yasser Arafat stole the limelight as an almost classic movie star quasi-villain who often made sense. To counter the prominence of the PLO, Israel and the United States helped fund the creation of Hamas. It exists almost exclusively in the Gaza strip.

Arguably, Hamas holds its leadership over Gaza as the consequence of a violent coup and persistent bullying.

Israel helped that along by imprisoning or assassinating the leadership of the Palestinian side in Gaza.

It’s just Gaza where Hamas has control. The West Bank has been controlled by moderates  called the Fatah Party led by President Mahmoud Abbas.

It’s time for Palestine to show itself as a cohesive, responsible entity capable of forming statehood. Israel; must stop preventing that from happening.

That’s how the three parties sort it out. Otherwise, Israel is the experiment that failed.