Women, who are typically the center point of families during this pandemic, need to look at some cold hard facts about COVID-19 pandemic and teach families the way ahead.

The human race is failing in its efforts to defeat the SARS-CoV-2 virus that causes this disease and with climate change threating many species already on the brink of extinction, there will be other virus pandemics while this SARS-CoV-2 keeps raging over the coming years.

Canada is in trouble but the failings epitomize those of most other countries. If the shortfalls can be addressed by the Canadian national government, Canada could be a global example with a recipe on how to avoid the worst case scenario which everyone is afraid to talk about. 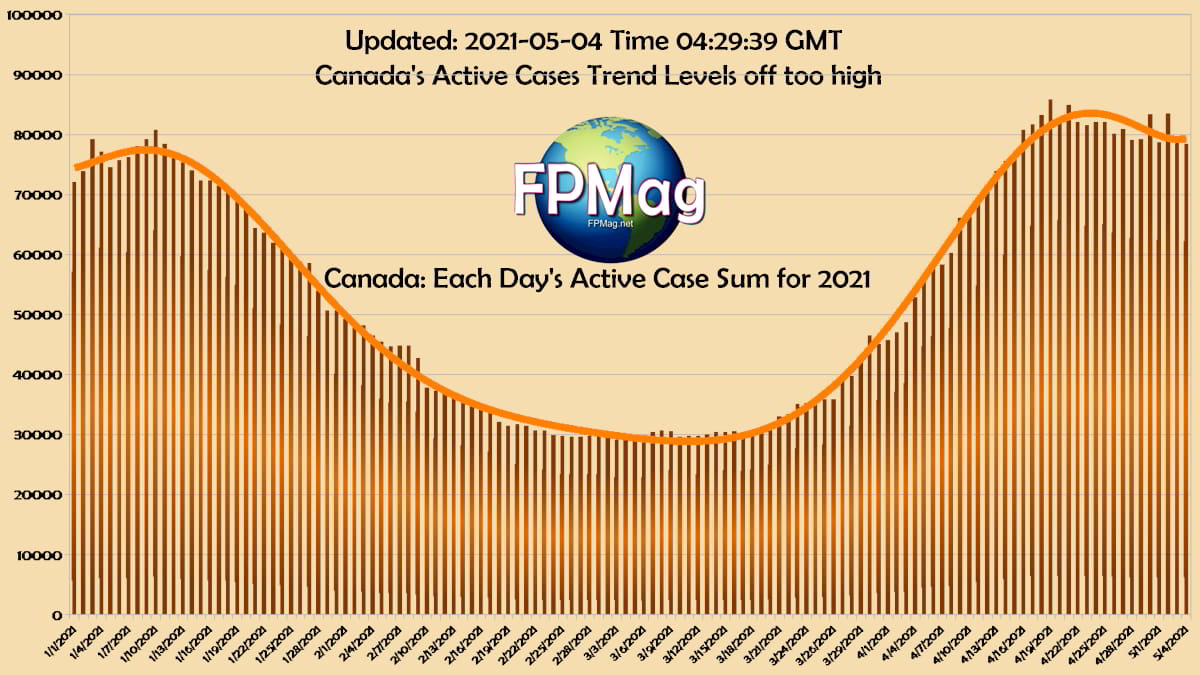 Canada will be joining Hungary, Mexico, Ecuador, Brazil, India, Poland, and the Philippines, for some very tough pandemic times ahead unless drastic action is taken at the federal level, suggests a biostatistician.

As has been shown true in the United States, a scattered regional or ‘provincial’ approach does not work well alone because of asymmetric health, economic, social and fiscal impacts that only the federal government can address, suggests the Organisation for Economic Co-operation and Development in a report entitled  “The territorial impact of COVID-19: Managing the crisis across levels of government“.

Strong national leadership is needed to re-educate the country in language the credulous Canadian understands, or Canada could  be lost to COVID-19.

What do experts say is missing, but most needed? National education and succinct communication to the most credulous Canadians; plus appropriate PPE for all Canadians.

The indicator of trouble is the sum of cases per 100,000 Canadians; the complete death rate of 38,500; and the 7-day flat trend line of active cases at nearly 80,000 sick Canadians, cross-Canada, that is stopped at a level far too high. (Statistics indicate, and experts around the world agree, far too many Canadians are sick with COVID-19 at this very minute.)

According to Fred Harris, a biostatistician team-lead in Singapore for the Civil Society Solidarity Partners against COVID-19, “I just don’t like it when active cases drop, then level far too high. In Canada the trending numbers of people sick today with COVID-19 is nudging the highest it has been all year and it is a flattening trend line.”

As total deaths rise past 38,500 including unreported excess deaths likely caused by COVID-19, a worrisome flattened 7-day trend line of Canada’s active cases must be addressed. These Canadians are filling hospitals.

“While some provinces have worked to reduce the growth in cases, others have radical increases,” says Dr. Harris.

Psychographic Analysis: Protecting  ‘Credulous Canadians‘ with lower than average intelligence but above moronic levels. They are being persuaded on social media to go wandering into huge crowds in close contact with infected persons wearing no PPE

“Of course, this current levelling could go in any direction, hopefully a downward slope resumes, but that is not apparent. We are predicting a climb coming soon, however, because of ten SARS-CoV-2 faster-transmitting variants we are watching, particularly the newest VOC spreading rapidly around the world from India,” added the biostatistician.

“In Alberta for example, Albertans stupidly headed out to rodeos in the past seven days without a care in the world for pandemic public health measures. It is hard to believe that people willingly risk each other’s lives in this manner. But a closer look at social media explains many things.

Canada’s Federal Government Health Experts have been incoherent and unprofessional about Mask Wearing. “Use common sense. If a nurse needs an FFP respirator to greet a patient with COVID-19, so do you,” says Dr. Anderson of The RINJ Foundation.

“Theresa Tam babbling incoherently about not needing to wear masks to prevent infection from a respiratory disease was reprehensibly stupid. Since then her cover-up bafflegab has not helped one bit,” suggests Harris.

“It can sometimes make it worse, if the person puts their finger in their eye or touches their face under their mask. We would only recommend putting a mask on if you were sick and were entering a medical facility, such as a hospital. We have no recommendation for people to wear a mask (when) going about their daily business,” is advise from Theresa Tam that has infected and killed Canadians according to a recent straw poll.

“What makes Theresa Tam think that Canadians are not constantly touching their eyes and faces without masks or the front of their cloth and fake-medical-spit-barrier masks hanging under their noses?” asks Grace Edwards, a Syrian-Canadian nurse practitioner working in a hospital in Syria.  “We see Canadian politicians and Canadian journalists on satellite broadcasts touching the front of their spit-barrier face coverings all the time,” she added.

“The public must be trained to wear filtering face piece respirators because this respiratory disease is going to be around for years to come, wave after wave,” continued Edwards, “long after Theresa Tam has been fired. She would not last ten seconds where I work.”

Theresa Tam, who was overwhelmed to the point of making seriously wrong risk assessments for Canada from the outset, and later telling lies and blaming others. Tam  would eventually blame the World Health Organization which at the time only had an Ethiopian politician at the helm who ignored the brilliant doctors like Dr. Mike Ryan and used an influenza protocol as the guidelines for the COVID-19 Pandemic.

“Until Dr. Mike Ryan’s influence over policy-making was increased, the WHO leadership did not have a clue what it was doing. It waited far too long, at China’s request,  to notify the world that SARs-CoV-2 had caused a pandemic,” notes Harris about the early days.

“Nothing was done to mitigate disease spread until the entire world was infected.

“WHO foolishly told the world not to wear masks to prevent the respiratory disease because the nurses and doctors would need those once non-mask-wearers got sick.

“It would have been better if the WHO has done its job in the first place instead of playing political games with large donor manufacturing giants and rich donor countries. The WHO job was to prevent the spread of disease and medical practitioners around the world were aghast at what was coming from the WHO to the point that even America left the WHO and called Tedros a Quack,” recalls Harris.

Canadians Must Wear N95 Masks Across the Country now and well into the future.

“Not only should Canadians be wearing masks regardless of getting a vaccination or not, they should be wearing filtering face piece (FFP) respirators such as the N95 or EU FFP-2,” says Harris.

“Statistically, people who properly wear FFP respirators such as the N95 or EU FFP-2, do not become infected with the SARS-CoV-2 virus.”

Ontario had a stockpile of 55 million N95 masks prepositioned since 2007 as a response to future pandemics by the people who fought  SARS1. Ontario lost them plus tons of other PPE.

“The brave heroes who fought SARS1 were ignored by Premier Doug Ford, whose government is broken, disconnected from reality, inept, and generally tells lies about almost every aspect of its work, including deaths due to COVID-19 in Ontario,” notes Edwards whose mother worked at Toronto General during SARS1.

“But  that is not just true of the Ontario Conservatives. The previous Liberal government was likely worse and that seems to indicate that it is time to fire the incompetent, corrupt buffoons enjoying political appointments as department heads and deputies,” she added.

The problem is one of failed leadership. See report Card.

Countries and regions with populist governments have mostly not fared well during the pandemic according to data collected by the Civil Society Solidarity Partners against COVID-19 and other biostatisticians.

In Canada the problem has shown up in several provinces according to graphs shown below provided by Civil Society Solidarity Partners against COVID-19.

“This indicates that a national leadership strategy is needed,” says Harris. The Canadian Federal Government has failed to take the lead in all aspects of leadership and needs to pull up its socks. There are not enough vaccines available to Canadians as there are for Americans across the border.  Relaxing rules and opening up restaurants in the USA is influencing Canadian recklessness and creating dangerous, uncontrolled growth in the Canadian outbreak.

Above video: How disingenuous Canadians likely with personality disorders are literally killing Credulous Canadians by convincing the intellectually vulnerable to violate common sense and wander into extreme danger. Volunteers have tracked many COVID-19 cases that were contracted during this and over a dozen similar events in Ontario on 17 April 2021. Many Canadians at these events will die; roughly 2% of those persons infected at the 17 April events.  Some have died already. 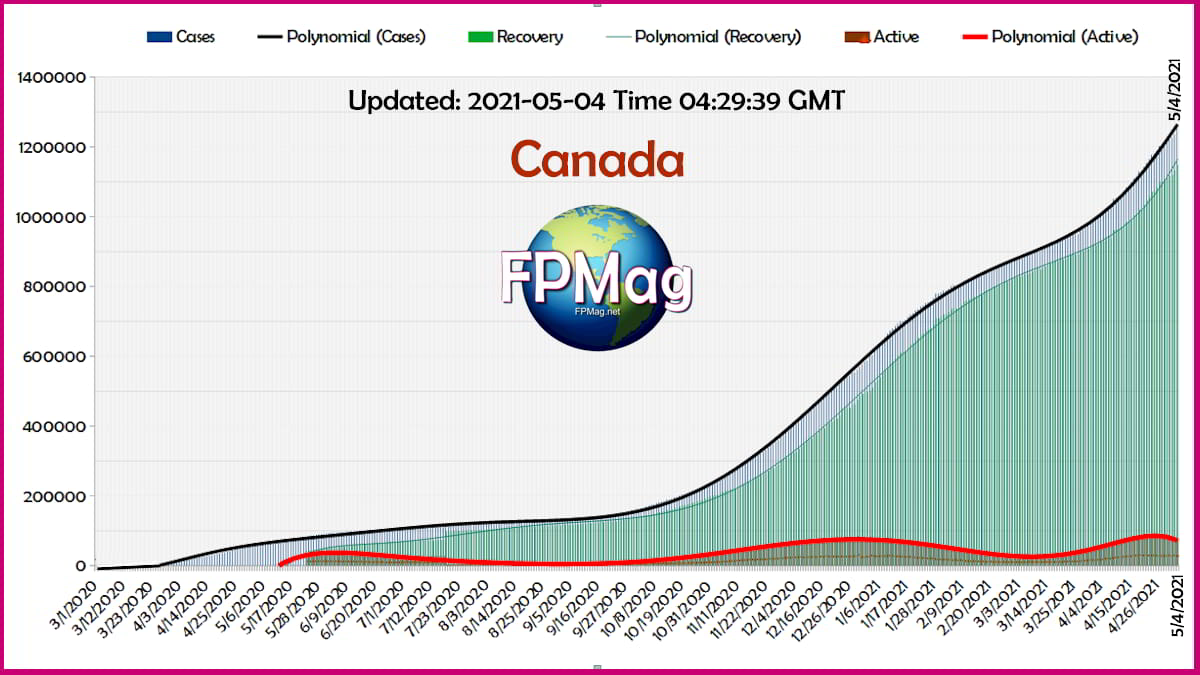 COVID-19 in Canada since the original outbreak in early 2020 Source: Civil Society Solidarity Partners against COVID-19

Canada is among the 25 countries with the most COVID19-sick persons today. Canada is at the bottom of the list, but still among the worst infected nations in the world.

Canada is among the 25 countries with the most COVID19-sick persons today. Canada is at the bottom of the list, but still among the worst infected nations in the world. Source: Civil Society Solidarity Partners against COVID-19 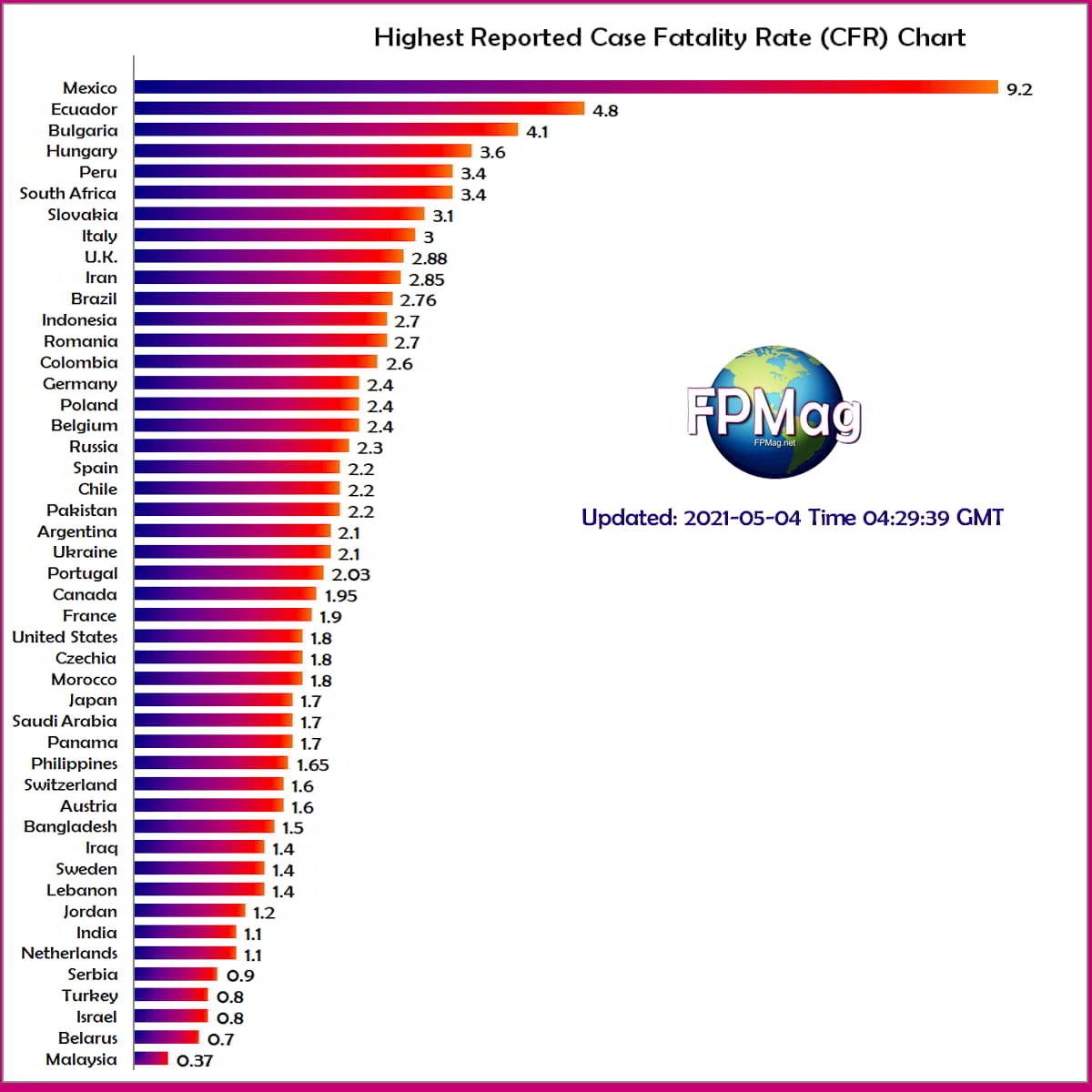 Training Video: How to properly wear an N-95 Mask