Governor Andrew Cuomo (NY State, USA) is the man who stood down Trump at the pandemic’s start. He is alleged to be a sexual groper as Trump is accused—and may rise to the level of a sex offender suggests some cops.

Thus Cuomo’s matter is no longer just an ethical scandal, it is a pattern of severely abusive misconduct that has just been internally profiled, awaiting peer-review,  as a “potentially dangerous offender unless forbidden further crime opportunities while being treated psychologically,” say some global experts of The RINJ Foundation. More than that, RINJ says it has learned that there are many more women complainants who have not come forward, according to third parties who know Cuomo-victims as their friends or associates.

“Governor Andrew Cuomo has created a culture within his administration where sexual harassment and bullying is so pervasive that it is not only condoned but expected. His inappropriate behavior toward women was an affirmation that he liked you, that you must be doing something right. He used intimidation to silence his critics. And if you dared to speak up, you would face consequences,” wrote complainant Lindsey Boylan on 24 February 2021.

This past Thursday a woman aide to Cuomo (63) said she was lured to the Governor’s Mansion, last year, under what was likely a ruse to fix his smartphone, where during the course of doing some work, Andrew Cuomo aggressively assaulted her by reaching under her shirt, persistently fondling her breasts. This coupled with five other women’s stories shows an alarming pattern of sexual misconduct.

Albany police are not investigating a crime (however the  New York State AG has an investigation underway) but are following advisory protocols and have offered assistance to the complainant via her lawyer says an Albany PD spokesperson who adds, when asked, only that, “it appears to rise to the level of a crime.”

The woman’s lawyer has said the alleged victim does not wish to make a complaint. Mr. Cuomo has not been charged or convicted of a crime of sexual assault and denies all allegations.

“Women, very often, do not want to file police complaints because it is traditionally like dragging one’s most private anatomical parts for procreation through the tittering mire of a patriarchy bent on disgracing women, in order to just win a case and to hell with justice,”  notes Monique Deslauriers, a RINJ sexual assault specialist and nurse practitioner in Calais, Maine.

Regardless, women do not make up stories like this. Ninety-eight percent of all such allegations are true according to tons of research done over the past 50 years, by law enforcement and women’s groups.

A woman tells a story of being kissed randomly by Andrew Cuomo. An Italiano might do that in Albany, maybe once, and get away with it, if on the cheek. But Andrew Cuomo is a repeat offender lip smacker according to several eye witnesses and complainants.

“I tried to excuse his behavior. I told myself “it’s only words.” But that changed after a one-on-one briefing with the Governor to update him on economic and infrastructure projects. We were in his New York City office on Third Avenue. As I got up to leave and walk toward an open door, he stepped in front of me and kissed me on the lips. I was in shock, but I kept walking,” wrote Lindsey Boylan on 24 February 2021.

Michele Frances of RINJ Women spelled out the issues of workplace sexual harassment for FPMag as follows.

“For another,” she added, “it is every person’s right to have a style of employment that does not include any form whatsoever of sexual favour; oppressiveness; assault; (which is what happens when the boss gropes a woman’s breasts as Andrew Cuomo allegedly did ); misogyny or other hate; psychological torture (which is what sexual harassment is all about); in order to maintain the job and salary.” (The latest complaint happened during the pandemic.) 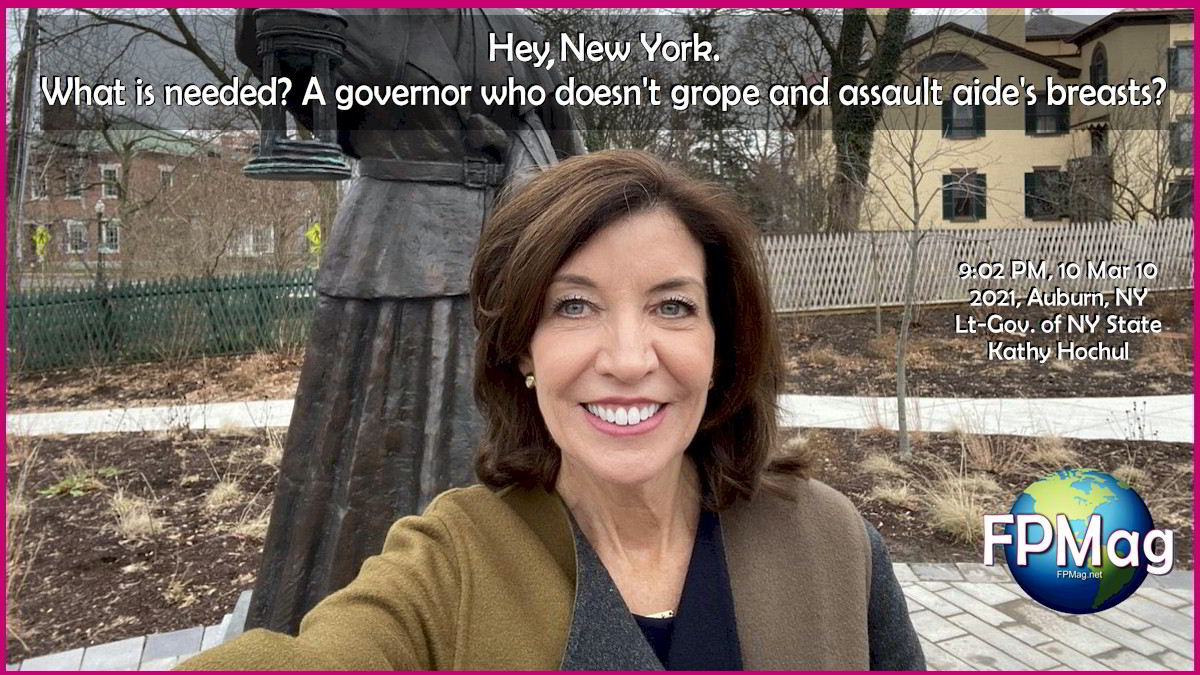 A local Albany paper received tips about a former Aide to Governor Cuomo.

“A female aide to Gov. Andrew M. Cuomo alleges he aggressively groped her in a sexually charged manner after she had been summoned to the Executive Mansion late last year, according to a person with direct knowledge of the woman’s claims.” (Citing: Brendan J. Lyons.)

Following these allegations, Governor Cuomo told a Syracuse newspaper, “I never touched anyone inappropriately,”  he said during the call. “I never made any inappropriate advances.”

Saying, “never touched anyone inappropriately”, was the same statement Cuomo delivered on 3 March 2021.  If the allegations are true, he lied.

That lie, according to local reports is why the person Cuomo allegedly groped last year at the Governor’s mansion, 2nd floor, came forward.

The 6th woman hasn’t filed a criminal complaint. A lawyer for the Governor’s office said Thursday that New York State government had reported the allegation to the Albany Police Department after the woman involved declined to do so herself. This is part of a set of protocols for handling such events and is deemed to be a method in which “assistance can be offered to persons who may have apparent need”.

“In this case the person is represented by counsel and when counsel confirmed the client did not want to make a report, the state notified the police department and gave them the attorney’s information,” said Beth Garvey, Governor Cuomo’s acting counsel. 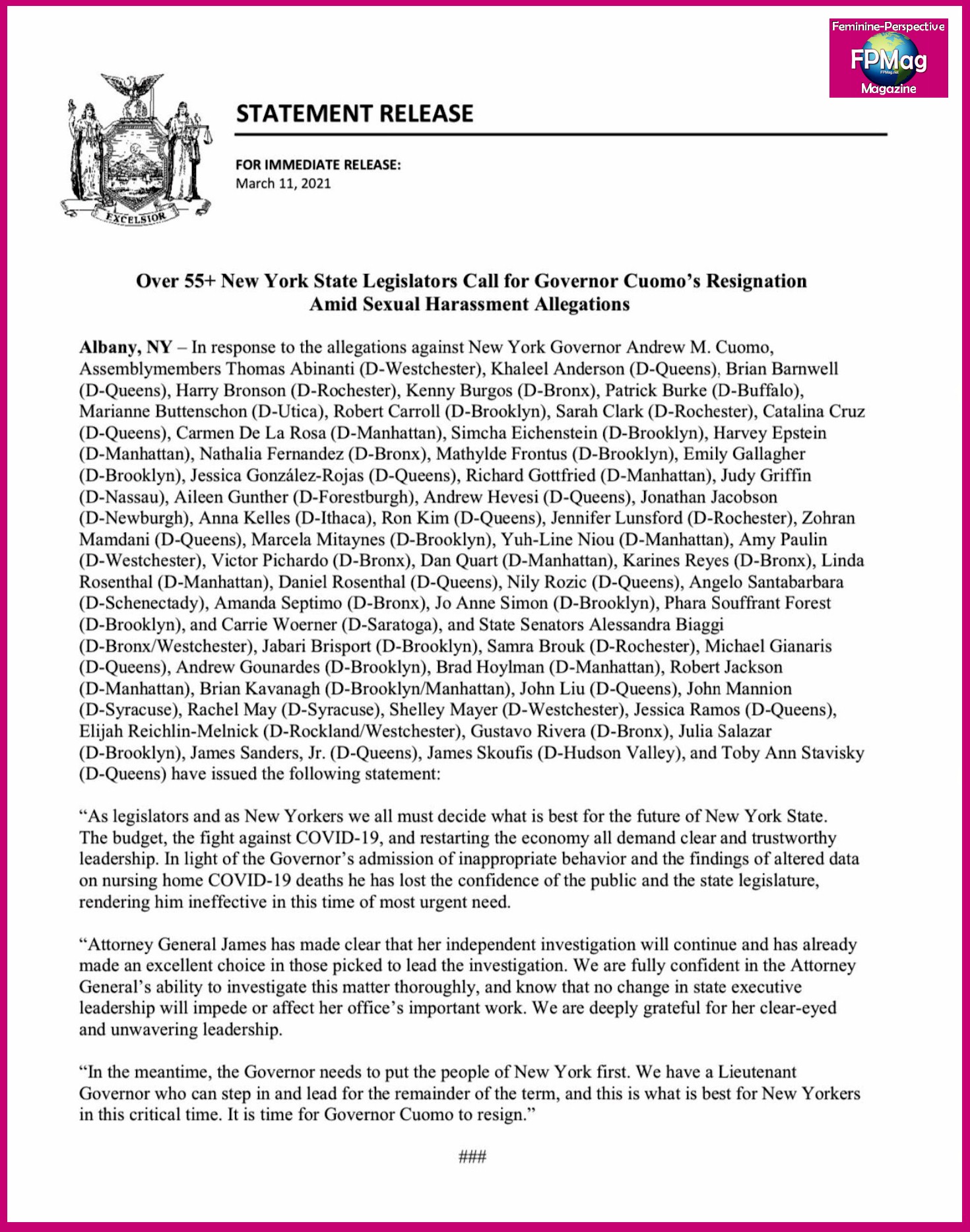 A New York WGRZ TV Video report on the story.

Here is  the extended problem as experts see it:

Asked for a comment for this article, Susan Davis, a specialist with   RINJ Women  said, “Helping children is what brave women do when they come forward and report aggressive sex criminals, especially opinion leaders and trend setters like Mr. Andrew Cuomo who seem to become more emboldened with impunity. Non-consensual sexual touching, groping or insertion of anything into an anus or vagina is a serious and harmful sex crime against any person.  Many offenders who commit these crimes are around children and eventually offend against minors. That is why they must be stopped.”

Davis continued to say, “Yes #MeToo is working, except for kids. RINJ women workers from our rape clinics and medical outposts want to say #MeToo for millions of children, the most aggressively assaulted people in the world. Watch the video and listen to what girls are saying.”