Hearing an unfounded statement of former CDC Director Redfield  FPMag researchers searched to find evidence to which Redfield might refer. But there is none.

FPMag researchers began setting up interviews with the in-the-field doctors in Asia including PH, Nepal, Syria, Thailand, Nepal, doctors who have actually been working with Coronavirus infections for years.

“Hah hah, not just Keith Olbermann has called this guy a “quack”.  Where’s the evidence? Come on out here in Southeast Asia and practice medicine, desk boy?  And bring me a real coffee,” said a doc FPMag interviewed in Laos. She did not want to be identified ‘more than that’.

A Chinese doctor FPMag spoke to regularly laughed and hung up. 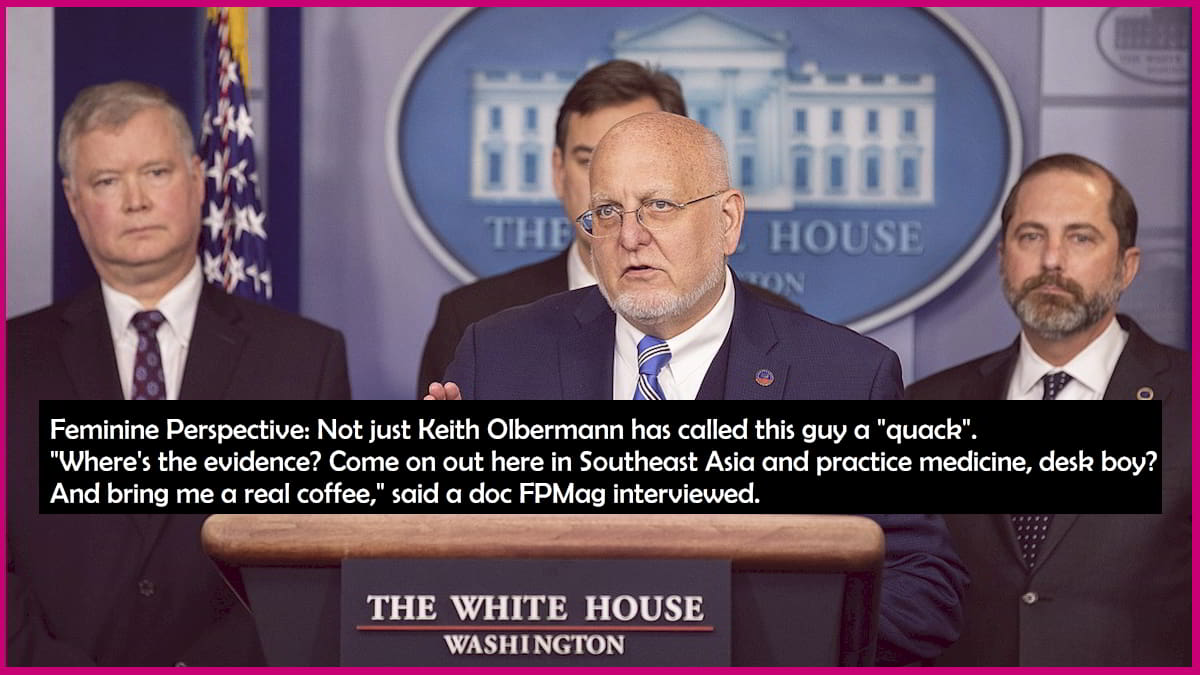 “But SARS-CoV-2 didn’t emerge instantly as  ‘one of the most infectious viruses that we know in humanity,’ as Doctor Redfield claims. It was initially relatively incompetent back in 2010 when we first believe we saw that thing in Cambodia. Sonya [co-worker]  was there then and she was confronted  about the strange disease plenty of times. Viral Pneumonia is what we thought it was. And then again in Thailand it was nothing compared to what it has become in its progressing mutations in 2021 having learned the human body,” said Dr. Buni, a RINJ Foundation doctor in Syria who has been treating COVID-19 patients for the past year and previously treated MERS patients in Iraq.

“More than that, because of the large number of our nurses working in mainland and island nations of Southeast Asia, we know something like COVID-19 started there.

“Many of our young nurses in Cambodia, Thailand and the Philippines have boy friends who work in the lucrative wild animal trade, which is a more than 2 billion dollar enterprise in each of those countries I mention. The boys, we noticed, started getting sick in 2019 as they got braver in the caves, coming out with bat snot all over their arms and faces. We were asked to treat them but at first we only identified pneumonia of unknown etiology, but it looked like a virus and did not respond to anti-bacterial treatment which is the point at which I was first notified, mainly because of my work on MERS.  Two out of three kids who became infected died among our girls in Bangkok, one month in the summer of 2019,”  said Doc Buni.. “I don’t believe we knew what we were dealing with because communications from those little gangsters in the wild animal trade was awful,” she explained.

“This doesn’t mean much of anything to anyone, I suppose, but to me it tells me that China is actually a SARS1 country and Southeast Asia, the mainland nations in particular, are SARS2-countries with plenty of immunity. The island nations of Southeast Asia are extremely vulnerable, whereas the mainland nations are doing fine.
“China would have been hit hard,” she added. “We have many of our team there. And it is likely that China’s unreported numbers are very high just like everywhere else on Earth,” she said.

WHO refuted Redfield well before he postulated his Trump Wuhan Leak Theory.

After extensive investigation under WHO Doctor Peter Ben Embarek, the head of the World Health Organization (WHO) mission to China, said it was “extremely unlikely” that the virus spread from a lab leak in the city of Wuhan.

The World Health Organization said “it is unlikely that the SARS-CoV-2 came from anywhere else but an animal pathway but research remained a work in progress. It was most likely to have crossed over to humans from an intermediary species.”

Read: Virus similar to SARS-CoV-2 was already present in Cambodia

“An exacerbating shout-out against Asians at a time when 23 million Asians in America fear for their lives” says Doc Anderson.

“23M US Asians fear headlines as ex-CDC Redfield emulates a quack making postulations based on a Ouija Board? NO EVIDENCE,” says doc FPMag interviewed

“But Robert Ray Redfield Jr. the one who was  Trump’s pick to prevent disease in the United States as the head of the CDC ” said an exasperated Dr. Anderson of the RINJ Foundation.

“What’s more, if disease control is the full responsibility of the CDC institution—we are speaking about the Centers for Disease Control and Prevention right— then where was this Redfield guy when the USA fell down under the SARS-CoV-2 bus and got ran over? What is he saying? America is China’s responsibility because a lab worker got sick? America has work done in that lab. Why didn’t the Americans quarantine the worker if this is something Redfield knows about personally?”

Robert Redfield has no evidence but he says Wuhan Labs did this to America:

United States Daily COVID-19 Data.  Source: Civil Society Partners Against COVID-19 Who collect data from each local five times a day since the beginning of 2020.

And Redfield implies a worker in a Wuhan Lab did this to the world:

Despite a lack of clear evidence, former CDC Director Dr. Robert Redfield said in a CNN documentary clip released Friday that he believes the novel coronavirus began transmitting in fall 2019 and that the virus may have originated in a lab in China. https://t.co/r4CpbrNsBl pic.twitter.com/GZl1BbM5ZO

We are all allowed to have “opinions.” Among Redfield’s previous opinions were that a useless vaccine for AIDS was actually a cure, and that he could just make up data about the disease and publish it.

My “opinion”: Robert Redfield is a quack. @cnn should not give him a platform https://t.co/IufSP8hcXi

“Robert Redfield has no evidence but he makes irrational unsubstantiated claims that a Wuhan Labs worker did this,” says biostatistician Fred Harris, for the Civil Society Partners in solidarity against COVID-19.

Robert Redfield, the Trump-appointed  CDC director has no evidence but he says Wuhan Labs did this. It is the top 100 Active case list for the highest 100 locales in the world Source: Civil Society Partners Against COVID-19 Who collect data from each local five times a day since the beginning of 2020.