The world is getting sick of America’s hatred. Sick of racism.

The problem with the Trump/Biden attacks on China for the Coronavirus is that it isn’t China’s virus at all. Typically this type of virus is from mainland Southeast Asia, particularly Cambodia, Laos and Thailand. The SARS-CoV-2 was cryogenically frozen in 2010 in Cambodia for later study.  In 2020 that virus was the same general type infecting the world, scientists discovered.

Joe Biden to slam Asians because Americans voted for him to do that? He says he is going after China.

The hegemonic narrative of the US is a White Supremacist ideology and Biden is no exception. He doesn’t see it but what he is espousing is racism.

by Micheal John and Katie Alsop 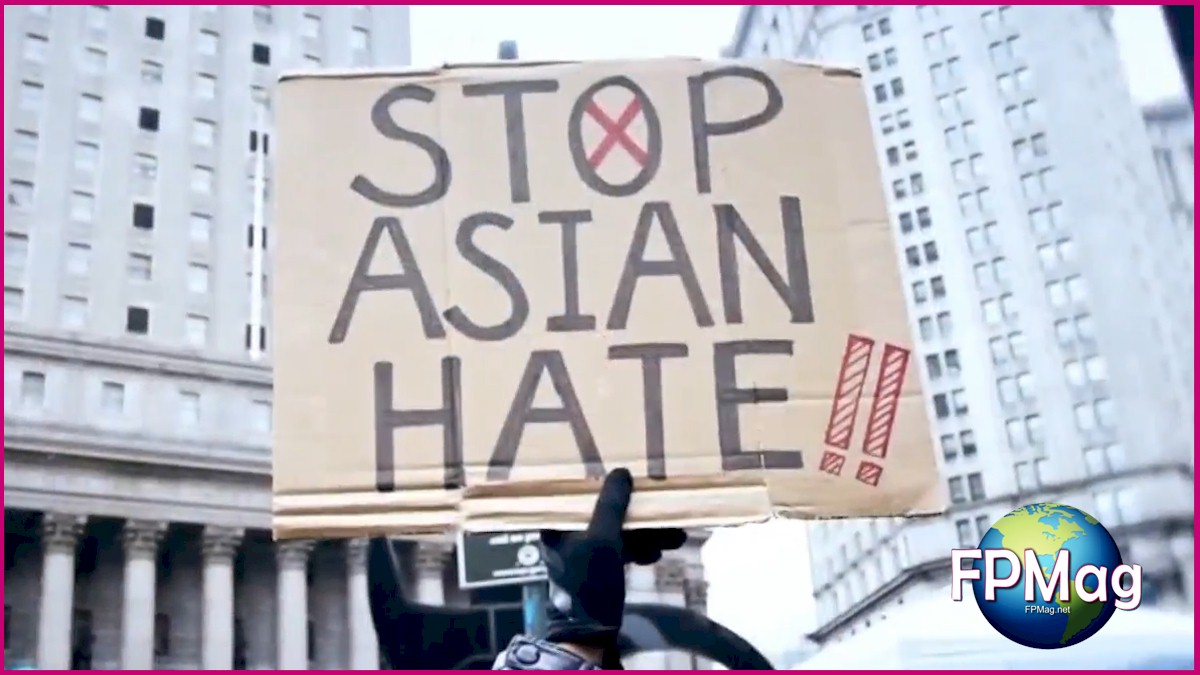 Nonprofit organization “Stop AAPI (Asian American and Pacific Islanders) Hate“ found that in the last 12 months, nearly 3,800 hate incidents against Asians were reported nationwide in America, with the majority of the reports coming from California.
Businesses and public streets were the most common places where discriminatory acts reportedly occurred and from March 19, 2020 to Aug. 5, 2020, 46% of the hate incidents were reported from California. The report stated that 7/10 incidents involved verbal harassment like name calling, profanities and the use of racial slurs. Photo Credit: Channel 7, San Diego file footage live news feed screen grab.  Art/Cropping/Enhancement: Rosa Yamamoto FPMag

Wow ⁦@JoeBiden⁩. Already trying to out-Trump Trump. This kind of fearmongering is causing violent attacks on Asian Americans. If you are trying to reform your past history of racist policymaking, like your 1994 crime bill, you had better do some homework. This ain’t it. pic.twitter.com/ePHiVGQFf3

Joe Biden campaigned on being hard on Asians so he is keeping the racist ball rolling.

Meanwhile Canada’s B.C. Premier John Horgan slammed US killings, and he says he plans to introduce new legislation to tackle the rise in anti-Asian hate crimes in his Canadian province. 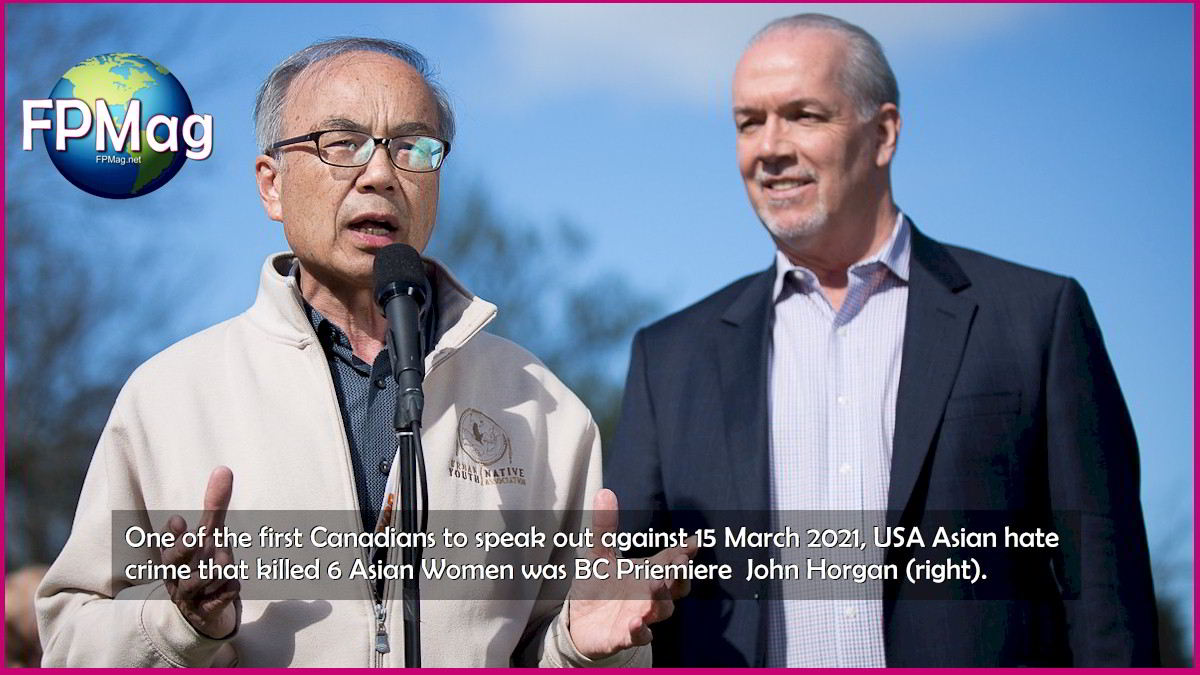 Premier John Horgan has focus on anti-Asian hate attacks in British Columbia after a Tuesday night mass murder of Asians in Atlanta, Georgia that killed six Asian women. He wants action to single out criminals whose crime has a hatred component, and he wants this type of crime ended, he says.

“We have seen hate here in our province, and we must all stand against it – wherever, and whenever it occurs,” he added.

To the south of Premiere Horgan’s British Colombia Province  there is a maelstrom of anti-Asian crime.

Types of Discrimination reported in Pew Research Poll of this week.

According to the Pew Research Center survey, three in 10 Asian Americans (31%) report having experienced racial slurs or racist jokes since the beginning of the pandemic. 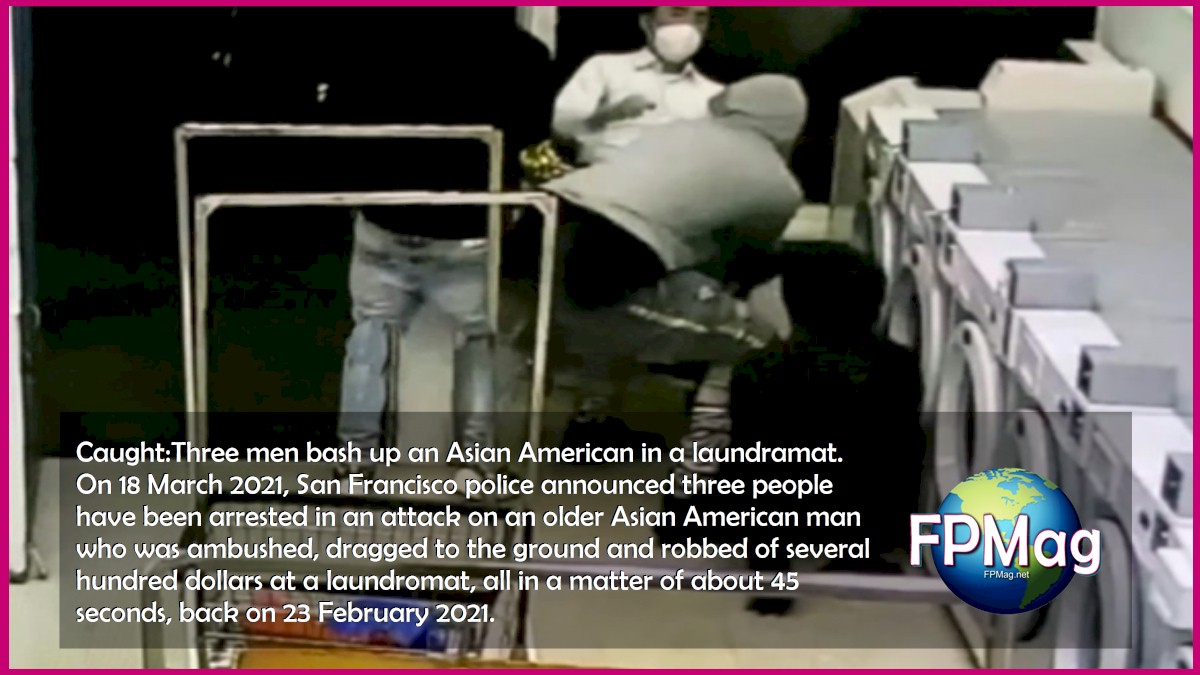 Caught on surveillance video: Three men bash up an Asian American in a Laundromat.
On 18 March 2021, San Francisco police announced three people have been arrested in an attack on an older Asian American man who was ambushed, dragged to the ground and robbed of several hundred dollars at a Laundromat, all in a matter of about 45 seconds, back on 23 February 2021. Photo Credit San Francisco Police Department. Art/Cropping/Enhancement: Rosa Yamamoto FPMag 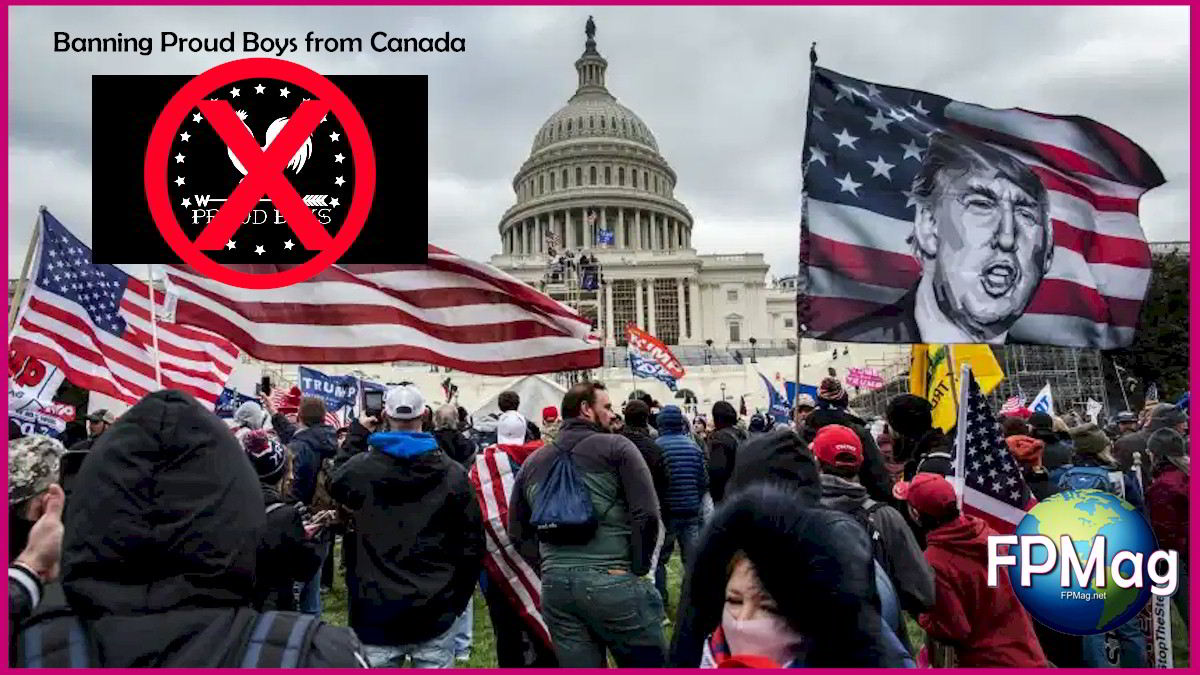 The RINJ Women have declared the Proud Boys cult a Public Enemy, particularly to All Women and Children all around the world. The global women’s rights group sets out a list of things that its members and ordinary citizens as … Continue reading 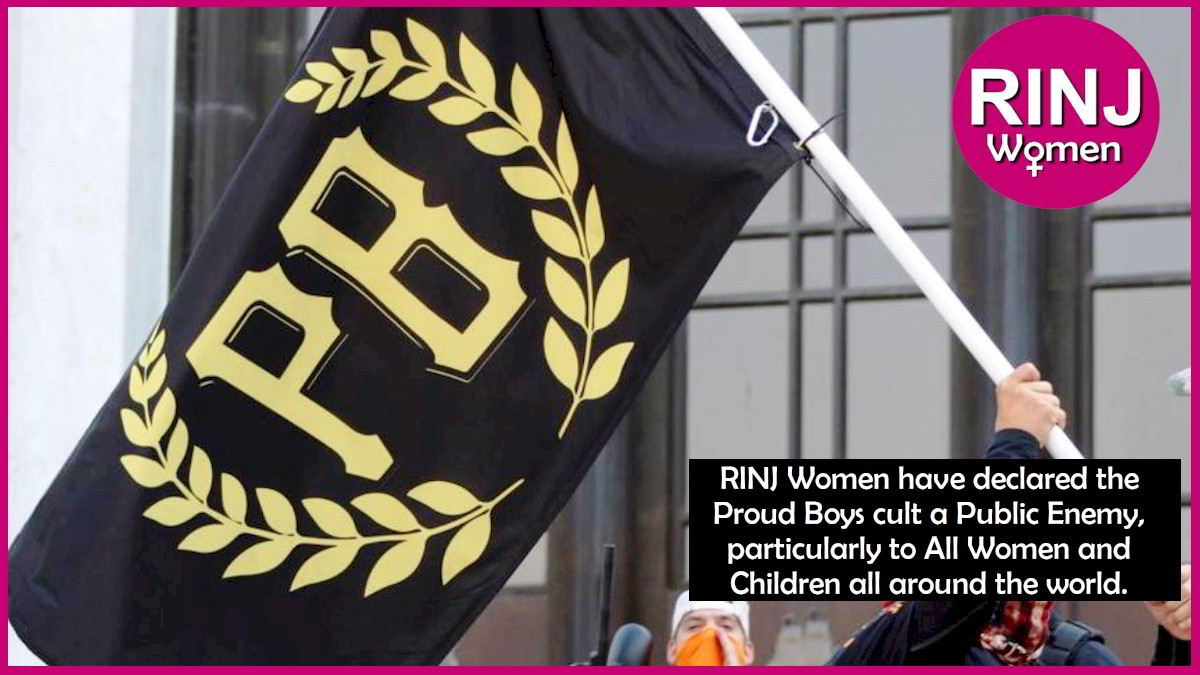 RINJ Women have slammed this group repeatedly since 2016 claiming it is a Hate group that targets indigenous women, Asian women, Black Women “and in fact aspire to anarchy and violence against women and children especially those of non-white races, and non-Christian cultures.” Art/Cropping/Enhancement: Rosa Yamamoto FPMag 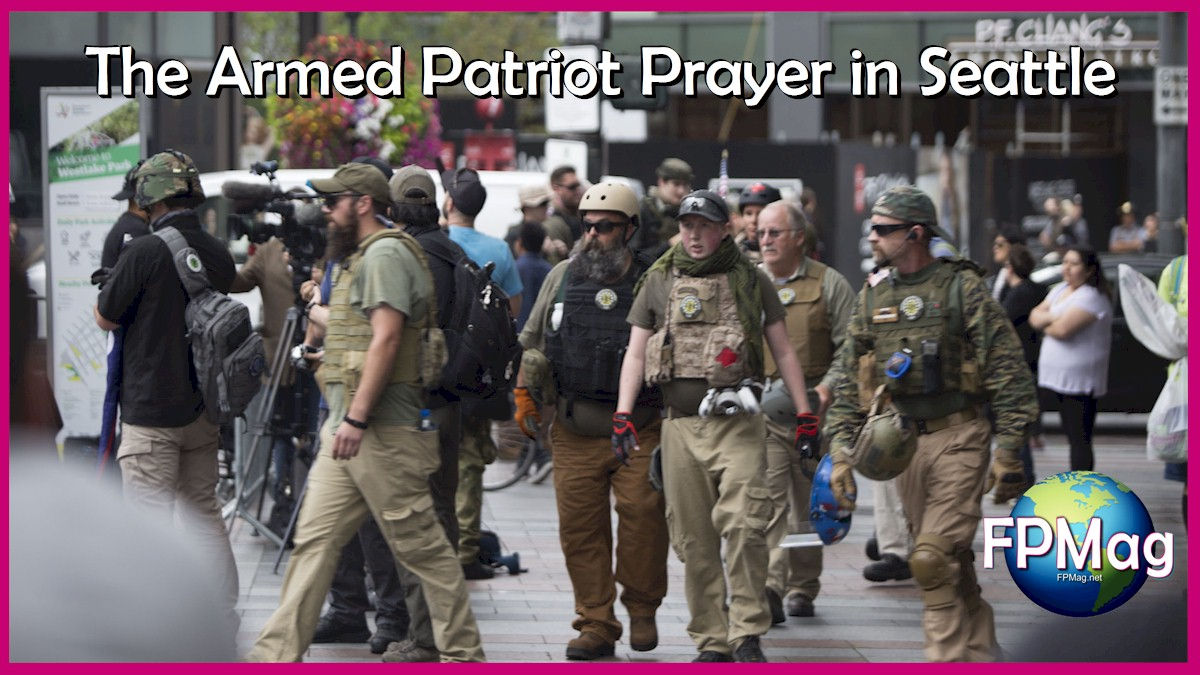 Which way is America going? 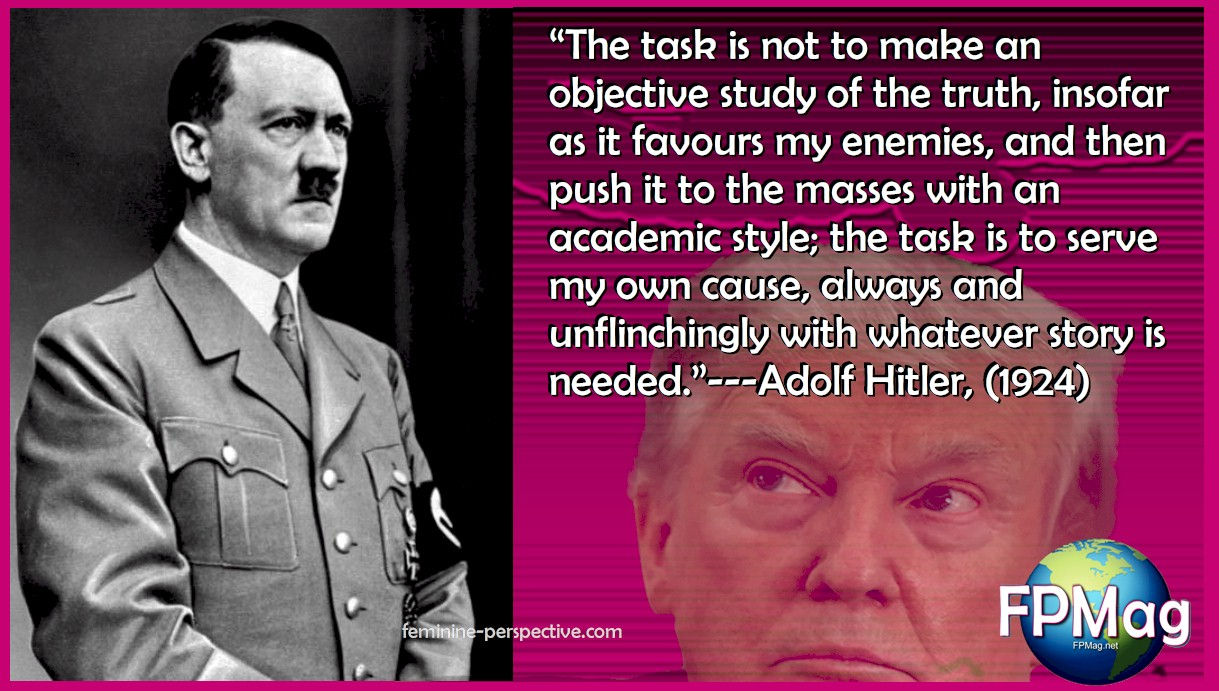 “The task is not to make an objective study of the truth, insofar as it favours my enemies, and then push it to the masses with an academic style; the task is to serve my own cause, always and unflinchingly with whatever story is needed.”-–-Adolf Hitler, (1924) Art/Cropping/Enhancement: Rosa Yamamoto FPMag

The China that John Biden says he wants to attack has a multi-times better human rights record than America, no matter what people believe of American propaganda.

This is the America that mass murdered a million Iraqis between 2003 and 2011 and since then engaged thousands of child soldiers as surrogates to fight ISIS in Syria and Iraq;  bombed a bus load of kids in Yemen; murdered Reuters’ journalists in Baghdad; kidnapped and molested thousands of children from migrant families; and flagrantly thumbed its nose at the United Nations General assembly which voted nearly unanimously to leave the Chagos Islands which the US had taken from its inhabitants with brutal force in the 1970s.

Reaction to a hate-filled ruckus between Biden and Russia/China in the ongoing Trump Cold War.

In an article on RT.com, Scott Ritter, who is a former US Marine Corps intelligence officer and author of ‘SCORPION KING: America’s Suicidal Embrace of Nuclear Weapons from FDR to Trump,’ Ritter writes, “President Joe Biden has defined his administration with the mantra of “America is back,” hinting at a return to what he and his supporters believe to be the halcyon days of President Barack Obama’s two-term tenure as president, as well as a sharp departure from the policies and practices of the man who usurped Hillary Clinton’s bite at the presidential apple, Donald Trump. ”

“In an effort to ‘build back better,'” writes Ritter, ” as Biden is wont to exclaim, his administration has embraced an ambitious agenda that aggressively seeks to both promote and install America as the world’s indispensable nation. And yet, in the span of less than 24 hours, the president and his primary foreign policy advisor, Secretary of State Antony Blinken, managed to undermine the very policies they sought to promote through a combination of narcissistic posturing and plain diplomatic incompetence.

“By labeling Russian President Vladimir Putin a “soulless killer,” Biden put US-Russian relations in their worst posture since the Cold War. And Blinken, during the Biden administration’s initial meeting between the US and China, managed to unleash the ire and rage of Beijing by forgoing any pretense at diplomatic norms and aggressively calling out China on a host of issues which touched upon its sovereignty. ”

The full editorial is here, published hours ago.

America lives in a glass house.