“London is unsafe for women,” say many.

“Even the police are beating up on women, in fact one of them is in custody charged with killing missing 33-year-old Sarah Everard,” says a lone feminist in London who carried a light and walked to Clapham Common on her own for 9:30 PM GMT on what is believed to have been the route of Sarah Everard on 3 March before she was murdered allegedly by A London Cop.

“This is a gut-grabbing, whole-body-cramp, symbol of endemic violence against London women. It is a reflection of the mindset of London Pigs in a slithering, declining patriarch that now clings to male dominance using only violence and lawwarfare,” said an 18-year-old Chloe, who attended the impromptu candle light vigil.

News article by Micheal John with files from Katie Alsop 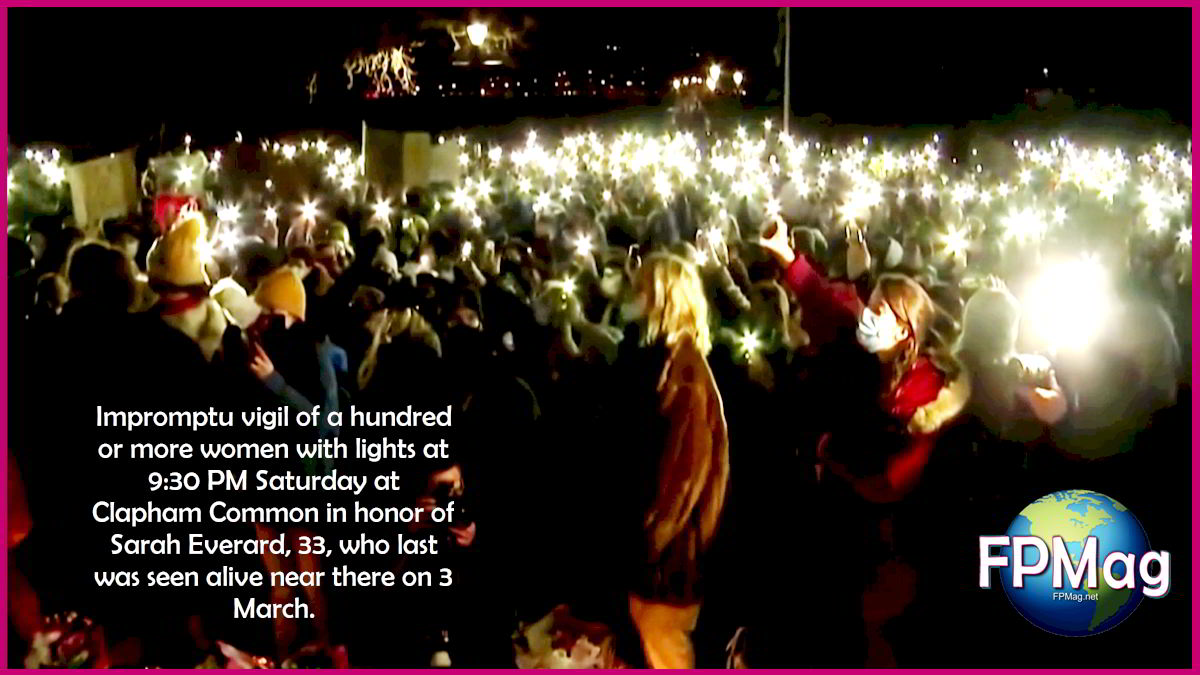 Impromptu vigil of a hundred or more women with lights at 9:30 PM Saturday at Clapham Common in honor of Sarah Everard, 33, who last was seen alive near there on 3 March. Source supplied Image. Art/Cropping/Enhancement: Rosa Yamamoto FPMag

“The Rodrigo Duterte misogyny types are taking over,” said Karinna Angeles, a nurse in the Philippines who had recently worked in a London Hospital.

The cop brothers apparently had his back. They threw down and bashed the women laying wreaths for sister Sarah Everard. One such cop refused to help a woman who was being assailed by a male person with his penis out and in his hands.

Metro London say they arrested only four. According to eye witnesses, women were targeted 14 male officers to one woman at a time and dragged away.  BBC video supports that allegation to some extent.

#MISSING | An extensive investigation is ongoing as we continue to search for Sarah Everard who went missing on the evening of Wednesday 3 March while walking between Clapham and Brixton.

“Why we need to speak out on what happened to Sarah Everard.” London Police are ignoring crimes against women. 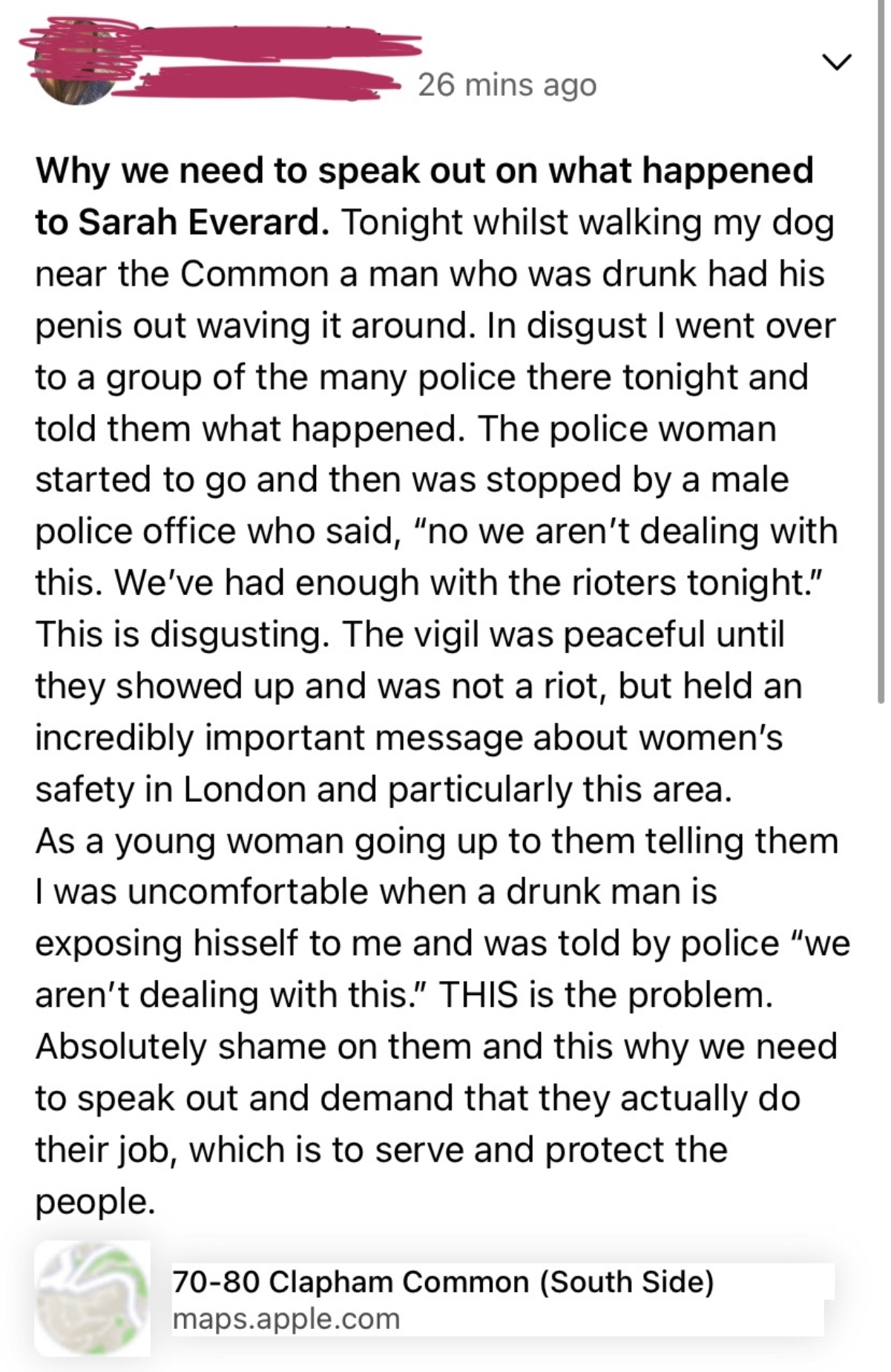 “Why we need to speak out on what happened to Sarah Everard.
Tonight whilst walking my dog near the Common a man who was drunk had his penis out waving it around. In disgust I went over to a group of the many police there tonight and told them what happened. The police woman started to go and then was stopped by a male police office who said, “no we aren’t dealing with this. “We’ve had enough with the rioters tonight.”
This is disgusting. The vigil was peaceful until they showed up and was not a riot, but held an incredibly important message about women’s safety in London and particularly this area. As a young woman going up to them telling them I was uncomfortable when a drunk man is exposing hisself to me and was told by police “we aren’t dealing with this.” THIS is the problem. Absolutely shame on them and this why we need to speak out and demand that they actually do their job, which is to serve and protect the people.”  Photo Credit: Source Submitted.

“Rage” is too nice a word for the feelings toward the
Metro man-cop-gang launching itself against London women. Add to that the disgusting politicization of Sarah Everard by competing Mayoralty Candidate(s) is a whole other story that could run under the heading of “NEANDERTHAL SLOTH”, reports Katie Alsop from London.

Sarah Everard had been missing since 3 March 2021. Her boyfriend successfully filed the missing alert on 4 March as per 24 hour protocols, but he knew everything was wrong from a telephone conversation with his sweetheart–a woman whom all her acquaintances say was the salt of the Earth and a true ‘angel’. How dare anyone kill her? asks a feminist who spoke to FPMag in London.

“How dare they? How can this be, ‘let-be’, as Metro cops wanted for their brother of only three years, barely a training period, and apparently not enough for a proper psychological screening? He was arrested even before they found her. They knew already it was a cop and they treat us like this?” was asked rhetorically, by Paige Benet of the RINJ Foundation women’s group in London, England.

Sarah’s body was found on Wednesday, 10 March in a builder’s bag, normally used to hold materiel. She was identified by dental records.

This is a gut-grabbing whole-body-cramp, symbol of endemic violence against London women. It is a reflection of the mindset of London Pigs in a slithering, declining patriarch that now clings to male dominance using only violence and lawfare.
The Rodrigo Duterte types are taking over.
London, England is unsafe for women.
Cops manhandled women laying wreaths
as their misogynistic ‘brother’ Wayne Couzens banged his head on walls in his jail cell
while awaiting his first Court appearance. The cop brothers had his back. They bashed the women laying wreaths for sister Sarah Everard
“Rage” is too good a word for the feelings toward the
Metro man-cop-gang launching itself against London women. This composite image is partly from an ITV News Video shown herein; partly from Google Maps and partly from a submitted image from the “Search for Sarah Everard”.  Art/Cropping/Enhancement: Rosa Yamamoto FPMag

On Thursday, Metro London Police Officer Wayne Couzens was before Chief Magistrate Paul Goldspring who formally remanded Cousins into custody to appear again at the Old Bailey on 16 March, 2021. Sarah was found on the tenth.

BBC estimators suggest Couzens may not face trial in front of  a jury, should he elect to go that route, until sometime in 2022.

Amy said, “This night London police decided to manhandle a group of women laying flowers where the pretty 33-year old was last seen,” as she broke down crying.

London Police became a male gang to go after women after one of their own patriarchal monsters was brought to court for a brutal, reprehensible murder of Sarah Everard.

Fear and Rage, a tormenting combination of emotions. 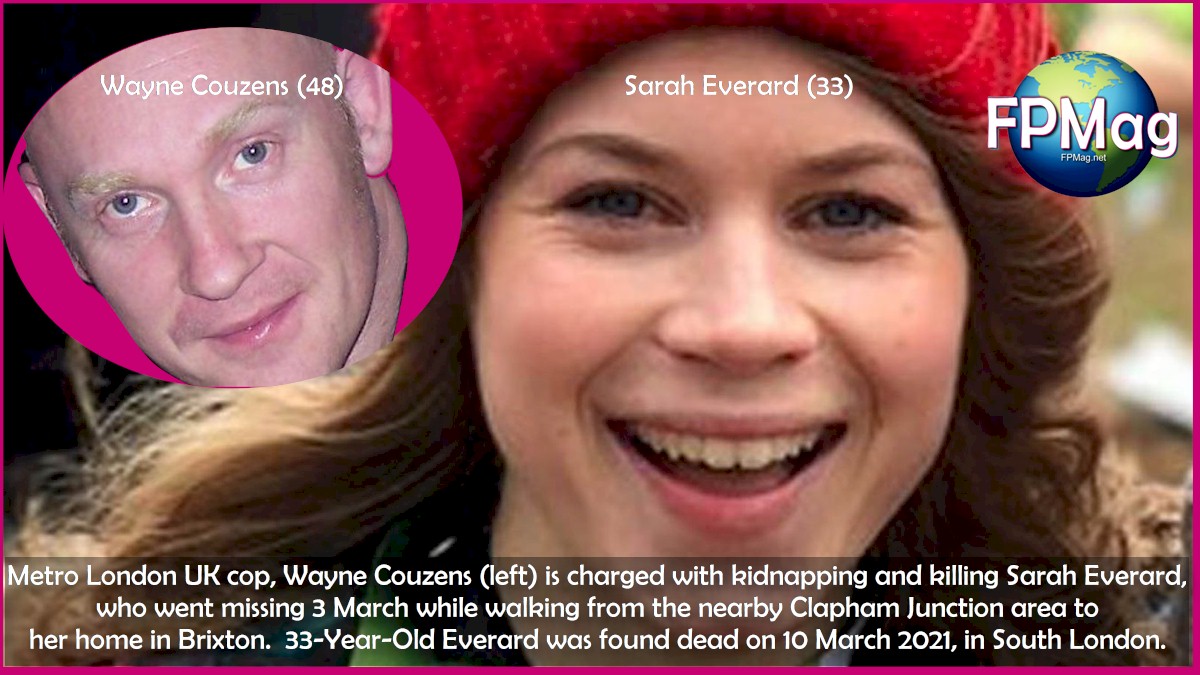 Metro London UK cop, Wayne Couzens (left) is charged with kidnapping and killing Sarah Everard,
who went missing 3 March while walking from the nearby Clapham Junction area to
her home in Brixton. 33-Year-Old Everard was found dead on 10 March 2021, in South London. This composite image is comprised of a Facebook photo and a police handout. Art/Cropping/Enhancement: Rosa Yamamoto FPMag

The accused before the court is Wayne Couzens, a Metro London Police Officer say official documents

His name is Constable Wayne Couzens. He is 48, and appeared in court after self-injuring twice, alone in his prison cell. His first appearance is to be followed by another indictment hearing on 16 March.

But Cousin’s brothers had his back on Saturday and took off last night to from all appearances to go beat the crap out of women holding lights, candles, laying wreaths and flowers for the murder victim, Sarah.

There had been a plan to hold a vigil for Sarah by a group of London women calling themselves Reclaim These Streets in the Clapham area. It was called off as London police backed by a judge put a halt to getting a permit for Saturday evening because of COVID-19 lockdown and public gathering restrictions.

Reclaim These Streets then urged followers to shine a light on their doorstep at 9.30pm, Saturday.

Thousand’s shone a light from home. A hundred or so went to Clapham Common.

Many ladies, some who have been accosted on the busy London streets that Sarah had walked, went anyway to lay wreaths and flowers.

“There were flowers, tears, wreaths, sobs, and Metro cops beating the crap out of the ladies,” says Amy.

“It seems they were on the side of the killer. That’s how, it goes today in London, now,” says Amy, whose husband, she told Katie Alsop of FPMag,  ‘packed her off’ with a bundle of  flowers while he took care of the children that night.

“My friend Laura had asked me to go with her,” Amy told Katie Alsop late Saturday.

“This afternoon I talked it over with my husband who said ‘that’s a bit late for London, and I don’t want you getting hurt too’. So I let it go. In fact I agreed because what my husband was saying was true. I had been smacked down and my purse with grocery money stolen before Christmas and I don’t want that happening again.

“Then around tea, I dropped the damn teapot as my hands were shaking. I said ‘oh dear I have broken Gran’s teapot’. And my sweetie said, “that’s it love, I with the kids will drive you and Laura and wait to take you home. Yes. I ‘ll drive you, if you like? That fixes everything.”

“I am glad I went. My husband was furious at how police beat on the women. He says ‘Those coppers all stand together against the dead woman.”

Cops beating up women at a vigil mourning a beaten and murdered woman. 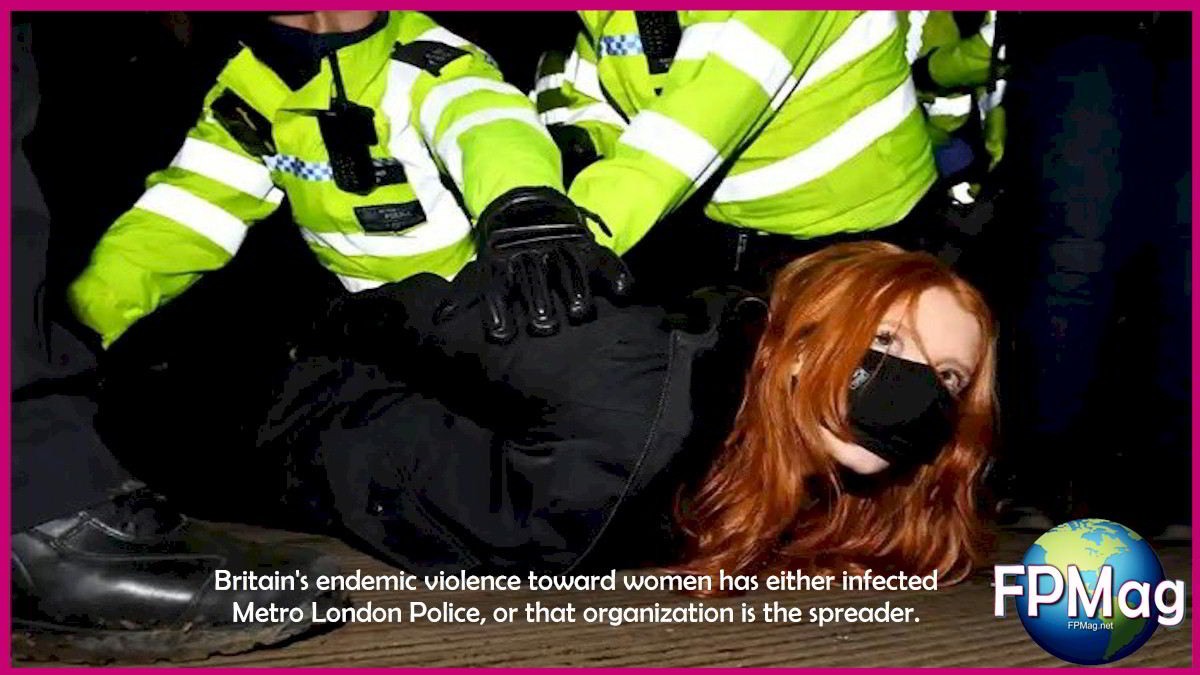 Cops beating up women at a vigil mourning a beaten and murdered woman. Britain’s endemic violence toward women has either infected
Metro London Police, or that organization is the spreader. Photo Credit: Harrison Blurtwhistle  Art/Cropping/Enhancement: Rosa Yamamoto FPMag