How do we stop this secondary pandemic of violence toward women?

Interview with a GBV survivor who is having a good outcome. But many are not.

“We face a growing, secondary pandemic of violence toward women and girls, daily on our Help-Line, says Katie Alsop, a founding director of The RINJ Foundation, a global NGO fighting for the right to safety of the person for women and children everywhere.

“Violence against women is endemic in every country and culture, causing harm to millions of women and their families, and has been exacerbated by the COVID-19 pandemic,” agrees  Dr Tedros Adhanom Ghebreyesus, WHO Director-General.

Editor’s note: Today’s news of this resolved but horrible case of violence toward young women may be triggering to some readers. 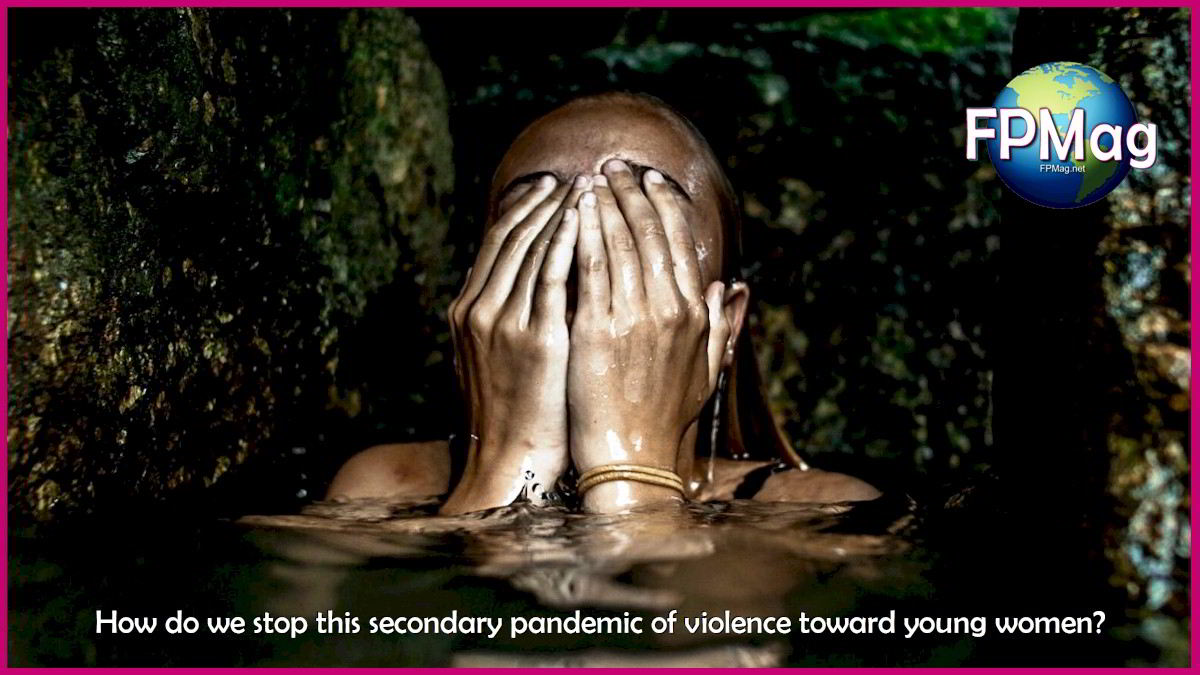 Young women are being drowned in violence. How do we stop this secondary pandemic of violence toward young women?
Photo Credit: Gage Walker on Unsplash
“Across their lifetime, 1 in 3 women, around 736 million, are subjected to physical or sexual violence by an intimate partner or sexual violence from a non-partner – a number that has remained largely unchanged over the past decade,” says the World Health Organization in a report this week. Additional Art/Cropping/Enhancement: Rosa Yamamoto FPMag

A rare interview with a GBV survivor.

During a session, nearly a month after the crime, “Ivana” had asked a RINJ helpline worker if Feminine-Perspective Magazine would please publish her story.

It took two days to get the approval from our editor as conditions were met; safety of the GBV survivor was assured; consent verified; and waivers were signed.

Helpline workers like ‘Cecilia‘ feel this messaging is important, because “it is so typical a case today wherein young women are suffering horrible violence during the pandemic that, everyone working on the global call-in Help-Line, was able to say what comes next, during our case discussions,” said Cecilia.

It wasn’t until the fourth session that the fearful and traumatized GBV survivor began to spill the crisis details.

“It was the fourth session with the caller, “Ivana”, explained Cecilia, a help-line volunteer counselor.

Cecilia is a Psychologist, graduate of Guelph University in Ontario, Canada, and has worked both as a psychotherapist in private practice and as a help-line volunteer for The RINJ Foundation, since 2012.

“Initially the caller, ‘Ivana’, had hesitantly asked about consent and what would comprise consent; who could consent and was it a rape if there was no consent even though she didn’t say, ‘No’, explained ‘volunteer-Cecilia’ who was consulting her notes with the express permission of the GBV  survivor.

“I could tell that Cecilia was mystified but I was afraid of sounding crazy,” explained ‘caller Ivana’ in a later interview where Cecilia was present.

“I was also blaming myself,” she added.

“It was my husband, you see, and he beat me up and pushed me down the hill where I lived. Then he raped me.

“He uses amphetamine and started to drink more since he lost his job. He had been gone for quite a few weeks and I kept calling his cell because we had no food and my little girl had an upset tummy and I had no meds; I had  no money; my mom, I had already tapped out. She had nothing left,” explained Ivana.

“Now I am so angry I want to tell the world. But at first I was blaming myself,” she admitted.

“It’s like, when you know you are being punished, you also know you are bad or you did something wrong. I guess it is hard to explain when you are always being yelled at and pushed around. You think it is normal if you are bad, to be punished.  OH. I can’t explain it…, [pause]” she said in exasperation.

But, Ivana did explain it very well. Many cases sound similar.

“I needed money for my child but my husband wanted sex when he came home after one of his benders,” the survivor explained.

“He was on the couch and when I sat on the floor to face him and pleaded with him, I said, ‘wait until later after you go to the grocery’. I was so hungry and my baby’s tummy was swelling. This had been going on too long. I had run up tabs everywhere.”

Ivana began to pull her lip back.

“Wham. He kicked me in my face and broke one tooth on the side, knocking the other one out at the front.”

Two Sisters in the Distress of Sharing a Horror Story

As ‘Ivana’ pulled her lip back to show the injury, Cecilia sobbed and was visibly upset. This was her first face-to-face with the survivor and it was a powerful event to watch as the two women who actually met, after dealing together with a women’s nightmare come true.

According to a recent study by the World Health Organization, violent crime against young women is on the rise because of the pandemic, perhaps.

“This violence starts early: 1 in 4 young women (aged 15-24 years) who have been in a relationship will have already experienced violence by an intimate partner by the time they reach their mid-twenties,” says WHO .

“So I ran out the door as fast as I could but his weight hit my back and I was crashed through the door breaking the latch and rolling down the hill beside the house where we rent two rooms, into a ravine. I think I hit my forehead on the concrete step. I had a bruise later over my eye, but that was the least of my problems.

“I was still stunned from his work boot in my face and I had broken my arm when I hit a 45-gallon drum in the ravine.  I was in agony, bloodied, but my husband kept saying angrily very loud, I remember, “I don’t wait. I DON’T WAIT. I don’t f-word WAIT you [many expletives].”

“He smashed my face with his fist and broke my nose in two places, I later found out. I went unconscious for a minute or two and the next thing I knew he was on top of me and inside me and leaning on my broken arm. I must have passed out again from the pain.”

Cecilia returned with tea and a nurse who stopped the interview and took vitals from the survivor, Ivana. She was OK, blood pressure/temp/pulse/blood-oxygenation all good, heart rate a little too high but acceptable after a pause and some deep breathing exercises coached by the nurse.  We were then allowed to continue.

The next thing I heard was my little girl screaming loudly from the top of the ravine, looking down on me. My husband was getting up and pulling up his pants. He had raped me. I knew he sexed me but he had always told me a husband cannot commit rape on a wife. Now I realize, that was wrong, after talking to Cecilia, and from what I have learned in group therapy.

“My daughter was standing with a fellow tenant in the house who was a 55-year-old truck driver who is seldom home. My daughter was screaming hysterically. Apparently the gentleman was coming home and had come to her aid and begun to investigate what another neighbour was saying happened.

“My husband said he was not sticking around here ever again and yelled at me, ‘I don’t wait because you [f-word ‘ing’] belong to me,’ and then he ran up the ravine. He eventually got into our beat-up old pickup truck, went screeching backwards hitting a small tree and then onto the road and spun the tires all the way up the street. He took all our valuables that now I wish I had sold, all our food, his gun, and a bottle of something and I have not heard from him since and neither has his family. That was a month ago, now.”

“So the nice tenant neighbour—we have one that is not so nice—took me to his poker friend, a doctor, who was wonderful and that doctor suggested I call the help line explaining that he was a different type of specialist than what I needed and maybe the helpline could refer me.

“The doctor set my arm and tried to straighten my tooth but said I needed a dentist. He also put four sutures in my lip. I did not even realize it was split.”

FPMag checked with the survivor if she was OK to continue and she said, “Yes”.

“Every day I go to ‘group’ and RINJ put me in a temporary shelter because they said he might come back so now nobody knows where I am. A RINJ sponsor / donor is donating funds to pay for me and my little girl but I don’t pay much because the shelter is free and food is brought every day. I got a new cast on my arm and I have had STD tests, one was positive, and I went on antibiotics that were provided for me without cost,” continued the survivor.

“My very favourite Aunt is getting a COVID-19 test today, but she has been vaccinated too, and she will come and get me and my daughter and take us to live with her. Here RINJ made the arrangements for us. I already have a certificate of my COVID test and my daughter’s,” she added.

“Listen to how smart my aunt is. She is divorced because of violence.  I told her about RapeIsNoJoke.com and she said she was a ten-year member of RINJ having joined up in 2011,” she commented.

After repeating her Aunt’s words, Ivana spoke softly, “This really is a women’s issue. Ten years ago I was in grade five. Oh my God, look what has happened to me too.”

Umm, all three of us cried.

“To address violence against women, there’s an urgent need to reduce stigma around this issue, train health professionals to interview survivors with compassion, and dismantle the foundations of gender inequality,” said Dr Claudia Garcia-Moreno of WHO. “Interventions with adolescents and young people to foster gender equality and gender-equitable attitudes are also vital.”

The article " How do we stop this secondary pandemic of violence toward women? " was written by Author: Melissa Hemingway (Biography, Email) Senior Staff Writer and Associate Editor at Large
Contact Melissa Hemingway on Twitter ~ Facebook ~ Find on YouTube