American mask-off could break success streak. Why do it?

Scientists tend to agree that, “universal mask use needs to be vigorously enforced in community settings”

But as five eminent scientists believe, “Current evidence, from observational studies to systematic reviews and epidemiologic modeling, supports the use of masks by the public, especially surgical masks, for mitigating coronavirus disease (COVID-19) transmission and deaths. However, public mask use has been heavily politicized with inconsistent recommendations by authorities leading to divided public opinion.”

A Harvard University scientist, Dr. Abraar Karan, believes that masks are such a powerful tool against the spread of SARS-CoV-2, that everyone wearing an FFP respirator would end the pandemic in a month. Watch the video.

When US case numbers plateaued at an awful high (but since then trended down slightly), seven US States have dropped mask mandates either by now or in a few days.

This follows University of New Mexico in Albuquerque, and Louisiana State University Health Sciences in Shreveport, during late February, both identifying a made-in-USA mutation of the coronavirus at amino acid position #677. This would likely make the virus more transmissible like the UK B.1.1.7 variant already in circulation and the E484K mutation, think several experts. (Read if you wish: Emergence in late 2020 of multiple lineages of SARS-CoV-2 Spike protein variants affecting amino acid position 677)

Author note: The Biden plan is working in a big way as it all comes together and deaths drop from 4500 to 750 in 60 days. So why are Republican politicians trying to kybosh the Biden ‘Pandemic End Game’ with unmasking, collapsing social distancing and opening bars while still not opening schools? But they open the gates for SARS2? Several scientists FPMag spoke to in England  see this as a form of political murder if “Neanderthals” (says Biden) get their way and kill the success of the Pandemic End Game. “Not just America needs the pandemic’s end,” said one with anonymity for not being authorized to speak for her employer, the British government. 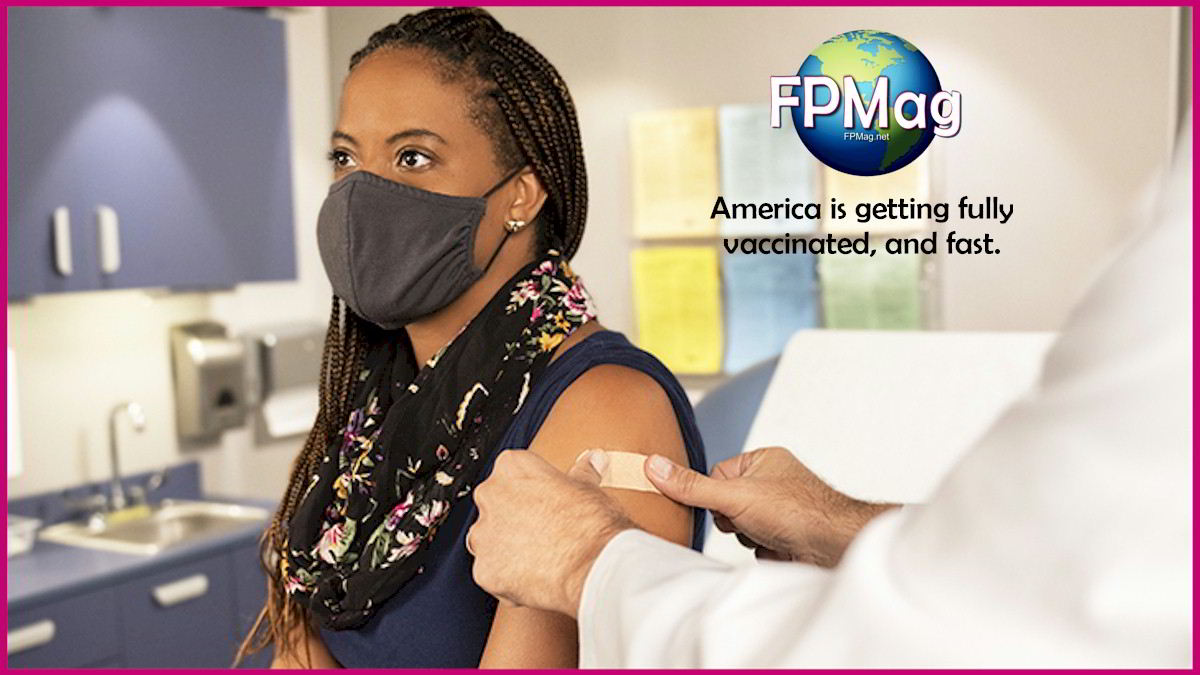 America is getting vaccinated, and fast. Biden plan is working as it all comes together and deaths drop from 4500 to 750 in 60 days. So why are Republican politicians trying to kybosh the Biden plan with unmasking and open gates for SARS2? The world sees this as a form of political murder if “Neanderthals” get their way and kill the success of the Pandemic End Game thus killing more Americans? Photo Courtesy: CDC  Art/Cropping/Enhancement: Rosa Yamamoto FPMag

“The House and Senate have passed the American Rescue Plan and President Biden looks forward to signing it into law this week,” says the White House ‘Blog.

“The Treasury and IRS are working to ensure that we will be able to start getting payments out this month. And the IRS and Bureau of the Fiscal Service are building on lessons learned from previous rounds of payments to increase the number of households that will get electronic payments, which are substantially faster than checks.” Citing WhiteHouse.gov: “The American Rescue Plan Passed – Now What?“

US President Joe Biden said he wants to create a national mask mandate and do it in concert with Governors and Mayors. Already there is an Executive Order for mask wearing and social distancing on all US Federal Government property.

Most scientists agree that mask wearing in addition to a vaccination process is the way to end the pandemic, and that happens to be Biden’s plan.

“The first order I’m going to be signing here relates to COVID-19,” Biden said weeks ago. “It’s requiring, as I said all along, where I have authority, mandating that masks be worn, social distancing be kept on federal property.”

Vaccinations are surging, about 95.7  million people have been jabbed under the Biden administration, but so too is SARS-CoV-2 virus surging beyond the initial in-the-wild first zoonotic mammalian transfer variant which was a pussy cat compared to the raging, more advanced killers now circulating in various parts of the world and starting up in the USA.

According to Dr.Rochelle Walensky, earlier today, “CDC’s most recent data indicate that the recent plateau of cases may be again starting to trend downward, with a seven-day average now of 56,000 cases per day.  We also continue to see decreases in new hospital admissions for the most recent week.  An average of 4,900 patients with COVID-19 were admitted per day in the most recent week.”

The New York Times is now reporting that America is averaging 2 million vaccine doses administered per day, but points to “a big racial disparity“.

“The biggest vaccination campaign in history is underway.”

According to the Bloomberg Vaccine Tracker, which has been a reliable global data source for weeks, “the biggest vaccination campaign in history is underway.”

“More than 326 million doses have been administered across 121 countries,” according to data collected by Bloomberg. The latest rate was roughly 8.35 million doses a day.

“In the U.S., more Americans have received at least one dose,” says the Vaccine Report, “than have tested positive for the virus since the pandemic began. So far, 95.7 million doses have been given. In the last week, an average of 2.17 million doses per day were administered.”

In Canada, 2 million Canadians have now been given one dose of COVID-19 vaccine.

But in Canada, stringent mask and distancing mandates have slammed down on COVID-19 in enough time to ward off a variant storm as was seen in the UK , Brazil, South Africa and France.

“We of the Civil Society Solidarity team against COVID-19 are very hopeful about the Biden plan. He is following science carefully and surging in accomplishments,” says Fred Harris, the quintessential  biostatistician boffin  leading the team to which he refers.

“Also, it is now clear that the most pernicious variants of COVID-19, some that defy vaccination and kill more people, are spreading across the United States,” he added, suggesting that they may have been mitigated by vaccinating nearly 100 million people but also, the estimated numbers of  total infected but unreported cases is well over 80% of USA population and herd immunity must be growing closer as an amalgam of the two phenomena.

America has 60% of the world’s active cases!

The whole world has seen a drop in COVID-19 infections and America has kept pace.

America is more infected than any country in the world. Estimates show that some ten times the number of confirmed infected cases is the actual number of cases in America including unreported mild cases and asymptomatic cases. These numbers are based on serology tests and other data. That number is not much different anywhere in the world.

In round numbers, America has 30 million confirmed cases. There are probably 300 million. What does that tell you about the Trump plan of forced herd immunity? Nonsense.

There are thousands of variations of the SARS-CoV-2 virus but only a few make a big difference. Some actually end the strain because  they are mistakes. Mistakes happen when the virus is within a host that has anomalous cell structuring or just a mistake of the virus own blueprint.

People make mistakes too and many  are killed for those mistakes.

Iowa, Mississippi, Montana, North Dakota and Texas are dropping mask mandates. Alabama and Wyoming will drop their mask mandates in a few days. Most states have mask mandates. The Seven Unmaskers are all republican governed.

Masks still seem to be a political icon.

Like in all things, America claims to be the biggest and most of everything in the world. Nobody kills Americans like Americans say the COVID-19 data. Seven governors are leading a pack against science. Science says that a filtering face piece respirator has a 95% efficacy at preventing infection of the wearer and others. 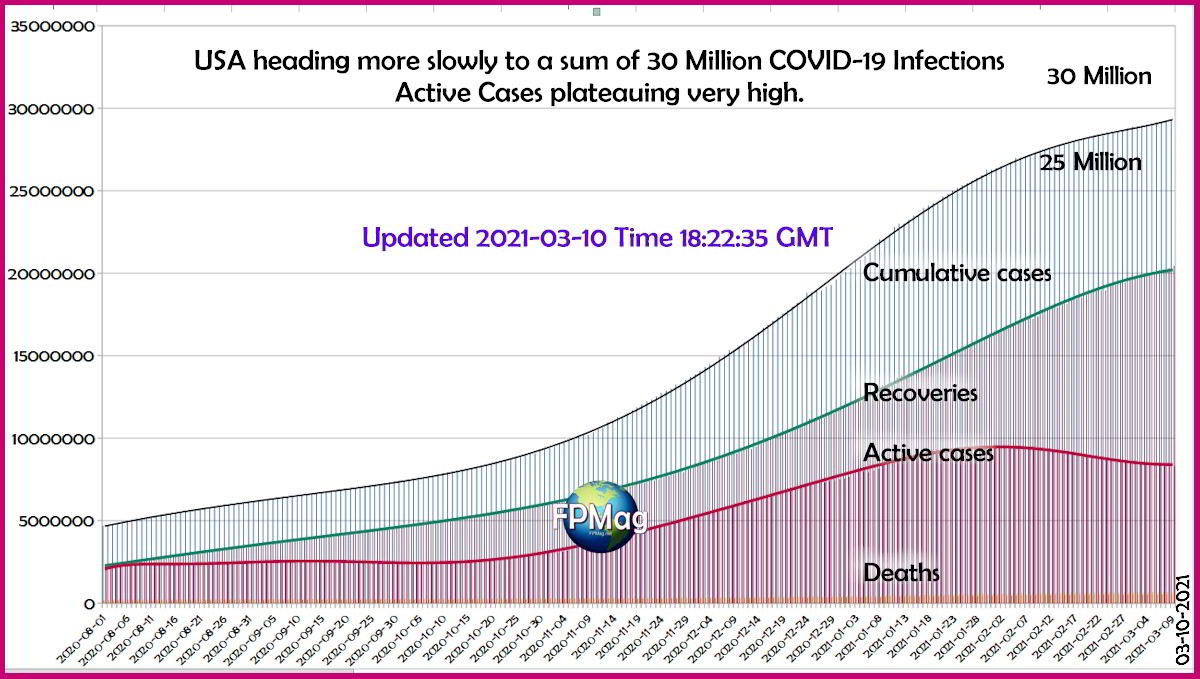 Here’s a way to inexpensively reuse N-95 masks a few times and save money and preciously unavailable NIOSH FFP.

Five uses per mask is what 3M came up with. Also the University of Nebraska epidemiology department suggests the following protocols. Adjust for non-professional applications.

There are indicators for destroying the respirator instead of reusing the device. Discoloration (beige coloring inside in the soft filter) is one. And becoming wet. It’s a goner (FFP respirator, not cotton mask)  if wet.

According to The Nurses Without Borders, who have adopted the University of Nebraska model, here are some tips for reusing respirator masks.

The World Health Organization offers this:

“Heat works to clean a respirator, say the nurses based on their experience reusing respirators during the pandemic.

“Sunlight—365nm to 405nm—interrupts the lipid part of the virus membrane) to inactivate SARS-CoV-2. Blue range light kills any fungus and a variety of strep and other pathogens. It takes a long time though. Tests suggest cycling masks two days in the sunlight. Cloudy skies are fine too because only the blue range and the UVA and UVB are germicidal to a significant degree and they are not blocked by cloud. UV-C range is blocked by the ozone layer,” says Grace Edwards from Syria where masks are scarce and disease is prolific.

“Another factor, COVID cannot survive long on the mask texture before it becomes invalid. But that is not the only problem. Other pathogens, even the simple ones like candida need to be invalidated. Time helps but cleaning with heat is a good idea if significant reuse is the goal. we use our autoclave and sometimes an oven,” she added.