“You need to be some kind of activated psychopath in a bad mood to justify the mass murder of the 1988 Mujahedin-e Khalq, likely the bravest, most sound group of good people in all the Middle East,” explained a determined Geraldine Frisque who is the spokesperson for the global women’s rights group, RINJ.

“The so-called supreme leader, Ayatollah Ali Khameini, rigging an election then trying to convince the world that Ebrahim Raisi—who allegedly commit these types of crimes—was democratically elected, is beyond belief.”

“This makes the Ayatollah suspect of being a raging psychopath himself. I will explain. One needs a huge fetish for blood and gore to promote a mass murderer to the leadership of their country with the hope of increasing the corralling and persecution of peaceful protestors, human rights activists, outspoken women, and persons from various minority groups, like women!” she alleged.

“Some 5,000 political prisoners were murdered and buried in mass graves by the Iranian government starting in 1988. Most Iranians believe that the person they were supposed to vote for, Ebrahim Raisi, was instrumental in these crimes from the standpoint of organizing a retrial for each of these persons and then sentencing them to an unceremonious death and mass burial,” the humanitarian continued. 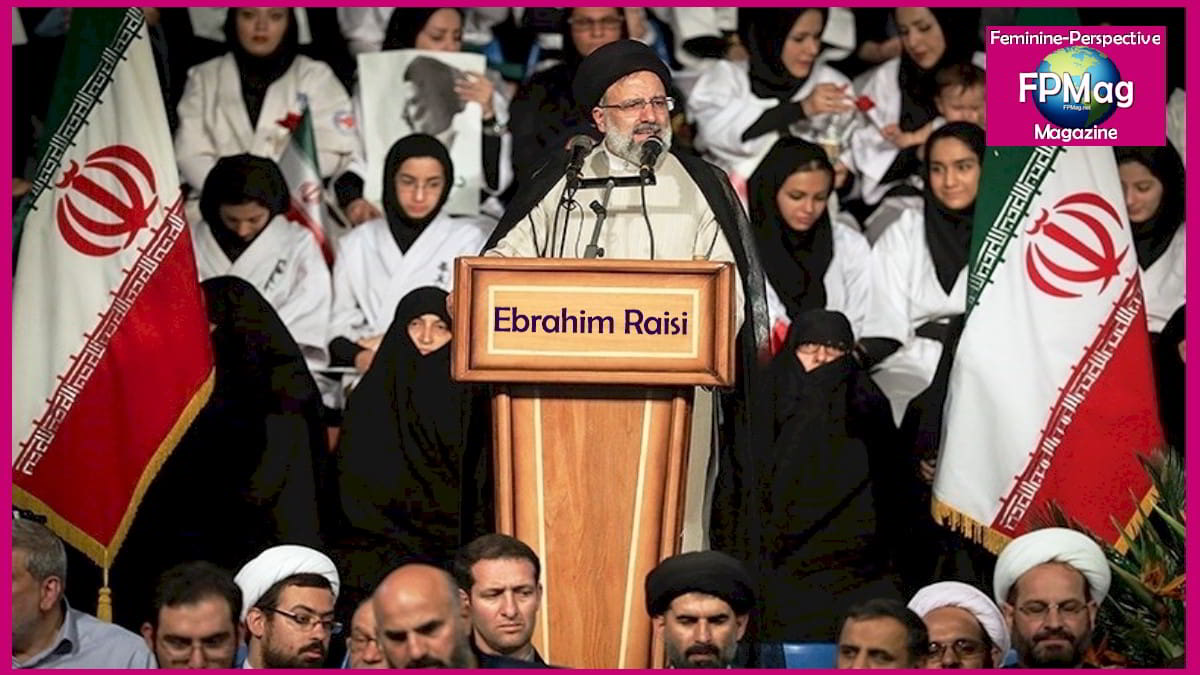 The women’s group is responding to the weekend news that the extremist Ebrahim Raisi was elected President of Iran, “from a field of candidates which excluded any women, and suppressed candidates who had even a vague chance of challenging Raisi” said Ms. Frisque.

Word of the accused human rights violator, President-elect Raisi, winning the election was expected, she said, but the release was delayed because Iran kept polls open for an extended period hoping to boost the dismal voter turnout, but as the results came in it was clear that Ebrahim Raisi would be declared at 62% of the poll. Numbers are vague yet but it seems that less than half the eligible voters, some 48%, cast a ballot. The current incarnation of Iran, since 1979, has never experienced this low a turnout according to al Jazeera. 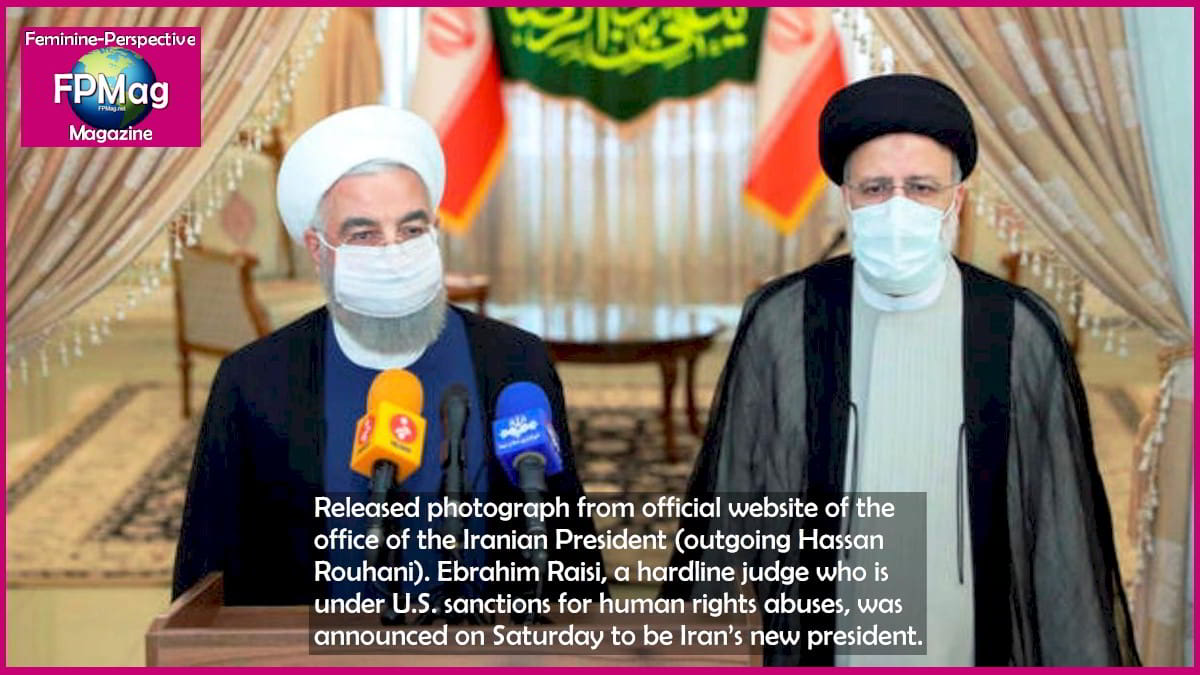 “The so-called supreme leader, Ayatollah Ali Khameini (left),” accused of rigging an election then trying to convince the world that Ebrahim Raisi (right)—who allegedly commit crimes against humanity—was democratically elected. This photo is released Saturday by the Iranian State and is in the public domain. The image is cropped and enhanced. Art/Cropping/Enhancement: Rosa Yamamoto FPMag.

Amnesty International’s Secretary General, Agnès Callamard, said: “That Ebrahim Raisi has risen to the presidency instead of being investigated for the crimes against humanity of murder, enforced disappearance and torture, is a grim reminder that impunity reigns supreme in Iran. In 2018, our organization documented how Ebrahim Raisi had been a member of the ‘death commission’ which forcibly disappeared and extrajudicially executed in secret thousands of political dissidents in Evin and Gohardasht prisons near Tehran in 1988. The circumstances surrounding the fate of the victims and the whereabouts of their bodies are, to this day, systematically concealed by the Iranian authorities, amounting to ongoing crimes against humanity.”

Observers around the world have called the election a ‘democratic fail’ because of strict elimination of competitor candidates done by all appearances to leave Ebrahim Raisi in a field of competitors nobody has heard of and who were unable to mount a competitive campaign. Ebrahim Raisi had a full campaign team ready to go since his failed electioneering attempt for the position in 2017 according to Middle East news media. 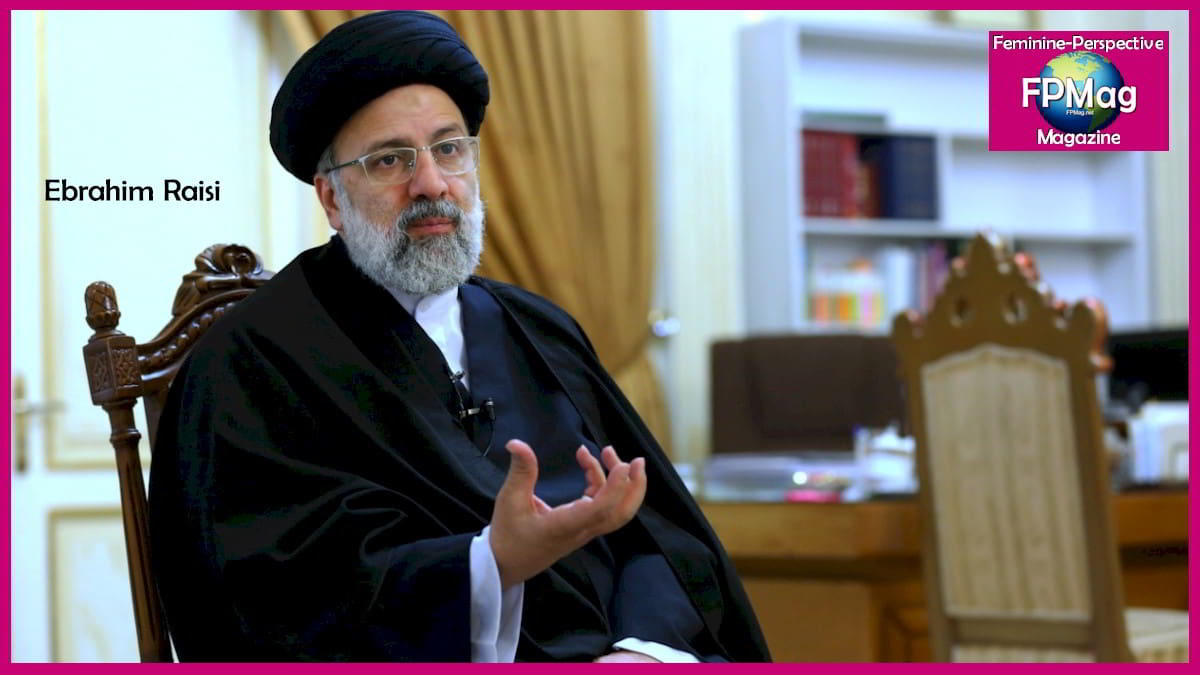 Asked what the impact of this development might be, Ms. Frisque responded saying her group had already set out a series of forward looking concerns.

She says the group firmly believes that

Additionally, “In Syria we expect more interference from Iran which, although most people do not realize, has infiltrated the government of Bashar al-Assad and may end up using the country more for support of Hamas in Gaza and Hezbollah across the world,” she said.

“We worry that there will be more attacks in Saudi Arabia, and in the Persian Gulf, maybe poorly disguised as being from Yemen,” she explained.

About nuclear non-proliferation, she explained, “Our security people’s research suggests Ebrahim Raisi is a proponent of Iran being equipped with nuclear weapon warheads plus proceeding with expansion and development of its already impressive array of missile technology, which I should add, may benefit from Iran’s alliance with the DPRK and maybe Russia if that nation gets overly hungry for business. But it is not in Russia’s interest to have a nuclear-weaponed Iran and President Putin knows that well. What quid pro quos may exist down the road, however, is what we need to worry about,” she added.

“Our experts say the time is now to arrest and detain criminals in Iran who are accused of crimes against humanity. They must be arrested, arraigned, brought in custody to the Hague for international trial and denied bail if they are a flight risk. How this happens, we have suggestions, but set that aside for now, it should suffice to say that the mechanics must be created urgently by the United Nations for dealing with such dire problems, problems like having Rome Statute violators elected to office in a rogue nation that may even have nuclear weapons within months.”