“America and Britain have conducted dangerous escalations of military tensions with warships in two significant waterways very far from their own territories and this must stop,” says Katie Alsop, a founding director of a global women’s rights group.

“An extremely serious incident has happened on 23 June, 2021, in the Black Sea between Russian and British naval forces,” said a Russian source in Syria.

Details from both sides have in recent hours emerged to confirm the source’s insistence of the seriousness of the incident, and FPMag proceeded with the story which has been building for a year or more.

Sources said yesterday from the Russian side that, “a mild skirmish evolved with warning ordnance fired at a British Missile Destroyer, the HMS Defender, well inside Russian Federation 12 NM territory,” according to live witnesses on both sides and according to Russian military sources in Syria who just hours ago got the full story from credible authorities on their side.

“All wars inflict the worst harm to women and children, yet they are started by foolish old male politicians, like Joseph Biden and Boris Johnson creating distractions to control headlines away from their own political trash pits,” says global women’s rights leader.

“In one case, the USA and UK are lambasting China for allegedly violating the rights of the Philippines’ territorial waters in the South China Sea (SCS) or the West Philippines Sea (WPS), with clopped-out, over-flogged, commercial fishing boats, manned by a few drunken, homesick, Chinese, sailors-a.k.a.-Manila-casino-workers,” she said.

“This SCS standoff  is starving thousands of Asian families who rely on the sea for their food, why and how could this be happening in the midst of a horrendously murderous global pandemic?

“Because thoughtless old men relate their power contest against the other guy’s military weapons to their unequitable penis comparison and envy. The older the patriarch’s elders get, the worse it gets, because nothing works except the f*cking guns,” Ms. Alsop growled angrily in a phone conversation.

“But then in the other case, Britain’s missile warship, HMS Defender, is also far from home, making very serious transgressions within a few miles off the coast of the Russian Federation with a modern guided missile warship, likely carrying nuclear weapons for all we or anyone knows truthfully,” Ms. Alsop continued in an emailed letter that comprises a heated policy statement.

The following morning in daylight a British MoD statement was issued:“This morning, HMS Defender carried out a routine transit from Odessa towards Georgia across the Black Sea,” said Britain’s Ben Wallace who was appointed Secretary of State for Defence on 24 July 2019.

“As is normal for this route, she [HMS Defender] entered an internationally recognized traffic separation corridor,” said the Defence Minister‘s missive.

“She exited that corridor safely at [4:45 AM local]. As is routine, Russian vessels shadowed her passage and she was made aware of training exercises in her wider vicinity,” said the statement.

“Harassing China, making transgressions into its waterways allegedly as a “freedom of navigation access” to international waters, with massive warships bristleing with missiles and guns built only to kill humans, 11,000 kilometers from home, is pure intimidation while at the same time Britain is traversing Russian territorial waters doing the same thing. Perhaps this is why Britain had to BREXIT before being tossed?” continued Ms. Alsop.

“This must stop immediately because even the slightest incident during these times of super tensions and military aggressions in over 61 conflicts could easily explode into world war,” said the women’s group leader.

“Being a woman or child in any war is a thousand times more dangerous than being a soldier,” Katie Alsop said in a phone conversation, based on her multiple wars experience in the 21st Century, she said.

Major General Patrick Cammaert, the Deputy Force Commander of the United Nations Mission to the Democratic Republic of Congo, in 2008 said something similar: “It is now more dangerous to be a woman than to be a soldier in modern wars.”

“Traversing the Mediterranean with warships; passing through the Aegean Sea, then into the Strait of Gallipoli to the  Sea of Marmara, and then through the Strait of Istanbul to the Black Sea, far, far from home, all in order to make a transgression against the people of Crimea in the Russian Federation is not only violating global values but also betraying the trust of Turkey which has control of the latter three inland waterways before entering the Black Sea, and is an ally of Russia,” he said.

“Obviously this creates an embarrassment for the Turkish government when it is universally clear that England sees Turkey as a stepping stone to creating conflict in its region,” said the Israeli security analyst.

Navy Commander-in-Chief Admiral Nikolai Yevmenov said on Thursday in response to a significant act of war against the Russian Federation that, “Our Fleet acted, above all, professionally and safely to prevent this provocation, this insanity of the UK warship’s command from developing further.”

The Russian naval aviation arm of the Russian armed forces successfully coped with its task, he added. “Naturally, aviation was on high alert as soon as it received an order and accomplished its task. The warship moved away,” he said. 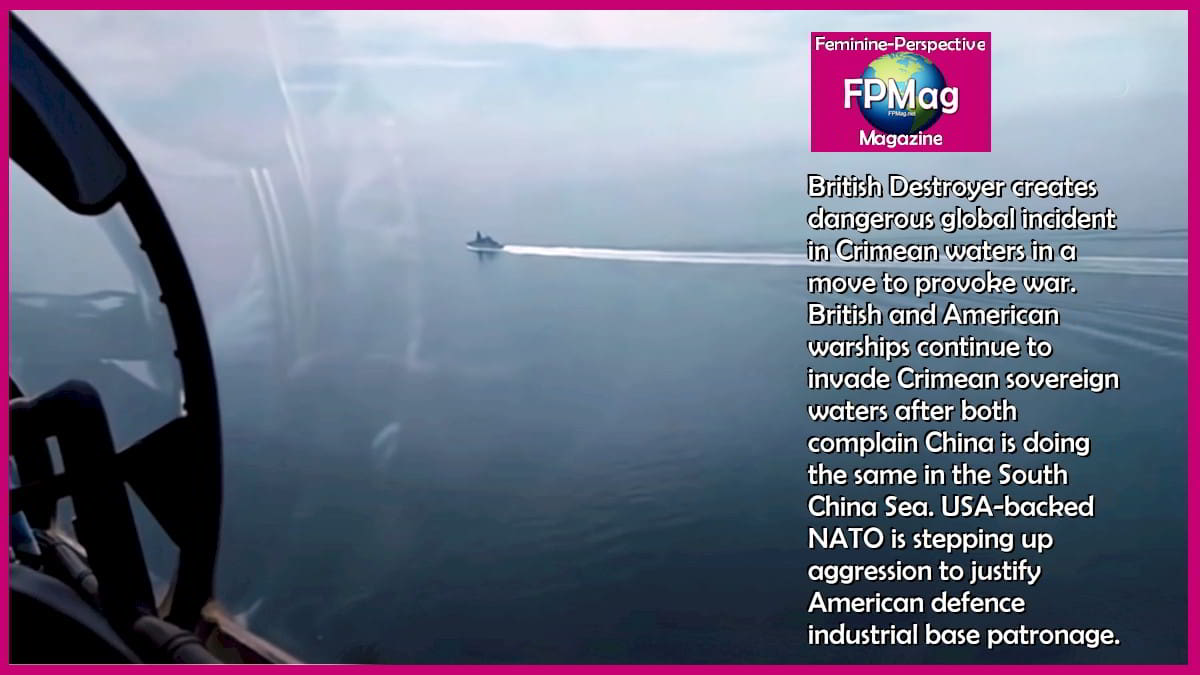 “No matter how many different ways British and American spin doctors claim that Automatic Identification System (AIS) signal data were faked, shots were fired and bombs were dropped, say the Russian side, and neutral vessel tracking resources around the world put the British warship HMS Defender in a position within two nautical miles of the Russian naval base at Sevastapol,” commented Geraldine Frisque, a spokesperson for The RINJ Foundation on a FPMag  follow-up call to get some additional information.

“In summary, our security experts tell us,” she said, “that a British missile destroyer, part of the time on 23 June in company with another NATO warship a De Zeven Provinciën-class frigate of the Royal Netherlands Navy, created a dangerous global incident in Crimean waters of the Russian Federation, within a short distance of the Russian Navy base at Sevastapol, in a move to provoke Russia.”

“Also the goal was to create a dangerous political news diversion for political events in Great Britain that challenged Boris Johnson’s competence as a leader.  British and American warships continue to invade Crimean sovereign waters after complaining China is doing the same in the South China Sea. USA-backed NATO is stepping up aggression to justify British and American defence industrial base patronage. This malfeasance must stop as it is getting too close to a global war threshold.”

“If this does not cease, particularly because this belligerence and aggression occur in the context of a world where male leaders are accusing each other of weaponizing a virus to mass murder millions, we intend to launch a year-long campaign to educate all women and all first-time voters around the world, then launch a campaign to recall elected officials who have pointed the globe toward war,” she added.

“I don’t know if we will be successful but women must do something to prevent malignant narcissism of a run-amok global patriarch, ending the human race,” she said.