For what will Trump be first arrested? It has come to that.

“What happens next is more about the timetable than the list of possible charges that could be brought against Donald,” says source working close to Donald Trump’s affairs in Florida.

“Donald Trump has been accused of being a con man, scam artist, a liar, a man who obstructs justice and incites insurrection. Will he ever be indicted or go to jail for anything, for any of it?,” asked Ari Melber, MSNBC, 9 June 2021. Journalist and host, MSNBC’s Ari Melber has been digging deep into Donald Trump’s alleged crimes.

This week the New York Times reports of possible Trump abuses of power,  doing what some representatives in the US Congress have described as weaponizing the US Department of Justice as a political tool.

Several New York Times reports within hours of each other have rocked lawmakers with information about possible DoJ malfeasance targeted at Trump impeachment chair Adam Schiff and US Congress Representative Eric Swalwell.

USA Congressman Adam Schiff, who is the chairperson of the House Intelligence Committee, late Thursday, called for an investigation of the Trump Justice Department  after hearing and reading a report that said that his phone records, along with those of his office aides and his family plus other persons including and related to Representative Eric Swalwell, also of the House Intelligence Committee, had been seized in what Representative Schiff described as “a terrible abuse of power”.

That, “makes the Department of Justice just a fully-owned subsidiary of the president’s [Trump]  personal legal interests and political interests”. Representative Schiff  said this to MSNBC’s Rachel Maddow, hours ago. Watch, if you like, the video below.

Video: Rep. Adam Schiff, chairman of the House Intelligence Committee, talks with Rachel Maddow of MSNBC about a breaking report from the New York Times that the Department of Justice under Donald Trump in investigating leaks to the media subpoenaed Apple for his data and that of his staffers as well as a child.

“Like many of the world’s most despicable dictators, former President Trump showed an utter disdain for our democracy and the rule of law. In May, I was notified by Apple that my records were among those sought by—and turned over to—the Trump Administration as part of a politically motivated investigation into his perceived enemies. This kind of conduct is unacceptable, but unfortunately on brand for a president who has repeatedly shown he would cast aside our Constitution for his own personal gain. I support Chairman Adam Schiff’s call for the Inspector General to investigate this case and other acts of the weaponization of law enforcement carried out by the former president.’—Eric Swalwell

FPMag was told that limited documents setting out the logged schedule of calls and texts but not actual content of activities on their iPhones and other Apple devices of at least 12 people including one child were obtained by Trump through his Justice department during an unspecified time in 2017 through 2018.

The purpose of the inquiries according to the Times report to which Representative Schiff refers, was to find out what members of the Intelligence Committee actually knew about the  Russian effort to get Trump elected.

Sources say records from Apple did not produce any basis for a complaint against Schiff. But later, once William Barr took the helm of Trump’s justice department, the ‘Schiff investigation’ was back on.

William Barr who has been described as Trump’s attorney, or as Tom McCarthy, a National affairs correspondent for The Guardian put it, “enabler-in-chief“, restarted the investigation into Schiff under the guise of looking for leak sources about the “Russian Investigation“.

According to Mueller’s reports plus certain court filings and events, Trump won the 2016 election with Russian help which contributed many millions of dollars illegally to the Trump campaign. Read if you wish ->How Russia Won Donald Trump The Presidency [In-Depth].

Criminal in White House made America a Shattered Family

On the topic of inciting insurrection, as referenced by MSNBC’s Ari Melber, according to sources close to the New York investigation (there may be other investigations too), “Trump’s role in this is clear to everyone, he was intensely devoted, by any means, to stop the count of the Electoral College. Trump saw Pence as expendable in the process,” says one, but ‘did he knowingly commit the crime of inciting a riot or insurrection and how does one prove that in the context of the right to free speech of a sitting president?’ says another. The first speaker, responded saying “Let a jury decide if Trump was at the time a president or a criminal politician trying to subvert a democracy.”

About obstruction of justice indictments against Trump, the whole world heard indefatigable Robert Bueller when he was asked if Donald Trump could be prosecuted following his time serving as US President, Robert Mueller  has said “Yes,” when asked if Trump could and should be charged with the crimes many have inferred from the Mueller reports once Trump is no longer serving, Read if you wish: “Conclude from Mueller: Trump safe as POTUS. Then Jail”.

“Fraud seems to be Donald Trump’s Specialty,” say sources and Court records which imply he used Charity Money to help his 2016 election.

According to pleadings before the New York Supreme Court filed in June 2018 by the Attorney General of New York State, Letitia James, “The Donald J. Trump Foundation’s directors were ignoring their oversight duties under New York’s charity laws and demonstrating how Mr. Trump repeatedly used Foundation money for his own personal, business, and political interests, including the unlawful coordination with his 2016 presidential campaign. In the first half of 2016 — at the height of the Republican primaries — Mr. Trump used Foundation money, raised from the public, to demonstrate his purported generosity and attract votes. Mr. Trump and his campaign doled out $500,000 at a campaign rally in the days leading up to the first primary election in the nation, the Iowa caucuses, then took credit for all $2.8 million in grants the Foundation made.”

Interestingly, Allen Weisselberg claimed he did not know that he was on the board of the Trump charity. Somehow Weisselberg, one of the ‘rats‘ (Donald Trump’s mob vernacular for describing anyone who ‘finked him out‘) who turned on Michael Cohen, in exchange for personal immunity.

Allen Weisselberg received a promise of limited immunity for Grand Jury evidence he gave against Michael Cohen regarding Stormy Daniels and a $35,000 monthly fee that was being paid to Mr. Cohen. 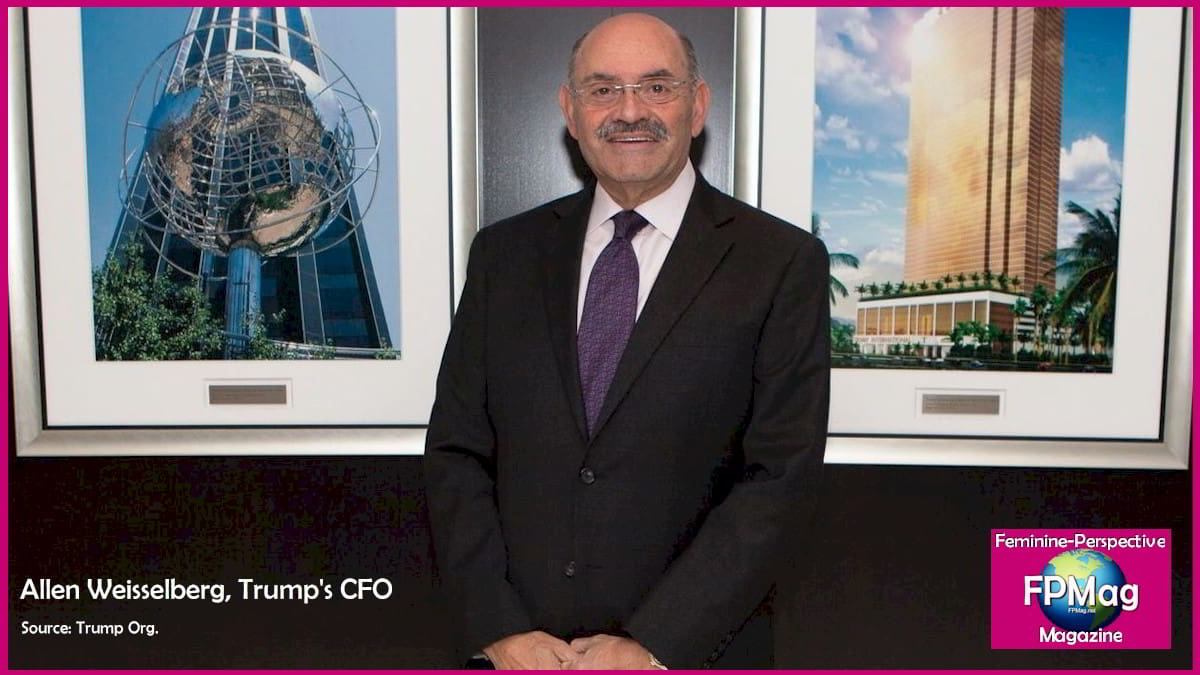 Chief financial officer of The Trump Organization and Trustee of Trump’s businesses while he was President. Allen Weisselberg claimed he did not know that he was on the board of the Trump charity. Somehow Weisselberg, one of the ‘rats’ (Donald Trump’s mob vernacular for describing anyone who ‘finked him out’) who turned on Michael Cohen, in exchange for personal immunity.
Following his graduation from Pace University in 1970, Allen Weisselberg began working as an accountant for Gravesend-based real estate magnate Fred Trump in 1973. He continued from there and became a total sycophant to Donald Trump. Said Trump about Allen Weisselberg: “He did whatever was necessary to protect the bottom line”
Photo Credit: Trump Org. Handout. Art/Cropping/Enhancement: Rosa Yamamoto FPMag

There was more to it all than that but the takeaway is that in 2019, the Court shut down the Trump ‘foundation’ and ordered Trump to pay $2 million to swizzled charities.

According to New York AG Letitia James, “Trump was ordered to pay $2 million, or $250,000 apiece to eight different charities. Those charities are Army Emergency Relief, the Children’s Aid Society, City-Meals-on-Wheels, Give an Hour, Martha’s Table, the United Negro College Fund, the United Way of National Capital Area, and the U.S. Holocaust Memorial Museum. Additionally, Trump was forced to reimburse his namesake foundation $11,525 for sports paraphernalia and champagne purchased at a charity gala, which was added to $1,797,598.30 already in the foundation’s bank account. The combined $1,809,123.30 was split evenly and recently transferred to the eight agreed upon charities. Each charity ended up receiving a total of $476,140.41,” she said in a written statement.

The children of Trump involved in the charity scam were ordered to take instruction on management.

Justice Saliann Scarpulla, with her decision ordering Mr. Trump to pay $2 million, included in her reasons a statement saying, “…Mr. Trump breached his fiduciary duty to the Foundation and that waste occurred to the Foundation. Mr. Trump’s fiduciary duty breaches included allowing his campaign to orchestrate the Fundraiser, allowing his campaign, instead of the Foundation, to direct distribution of the Funds, and using the Fundraiser and distribution of the Funds to further Mr. Trump’s political campaign.”

“The Donald J. Trump Foundation was a New York-based tax-exempt private foundation formed in 1988 by Donald Trump and existed until its court-ordered and court-supervised dissolution in 2019. It was formed by Trump to receive his share of the royalties from his book Trump: The Art of the Deal, as well as donations from outsiders, to be applied to charitable causes,” according to Wikipedia authors. 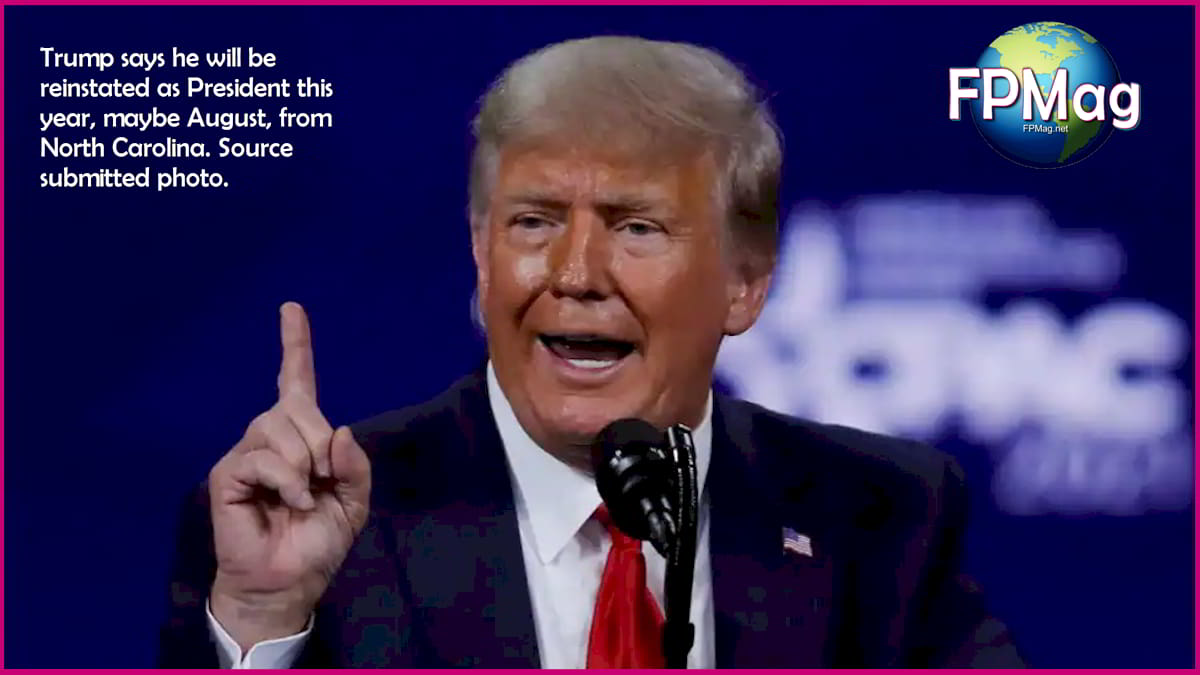 Trump says he will be reinstated as President this year, maybe August, from North Carolina. Others say he will be arrested this year. Source submitted photo. Art/Cropping/Enhancement: Rosa Yamamoto FPMag

Allegations are confirmed by former Trump White House counsel Don McGahn, as was confirmed by Robert Mueller, that the findings of the Mueller investigation provided sufficient evidence on which Trump could be charged once he was no longer serving as President. 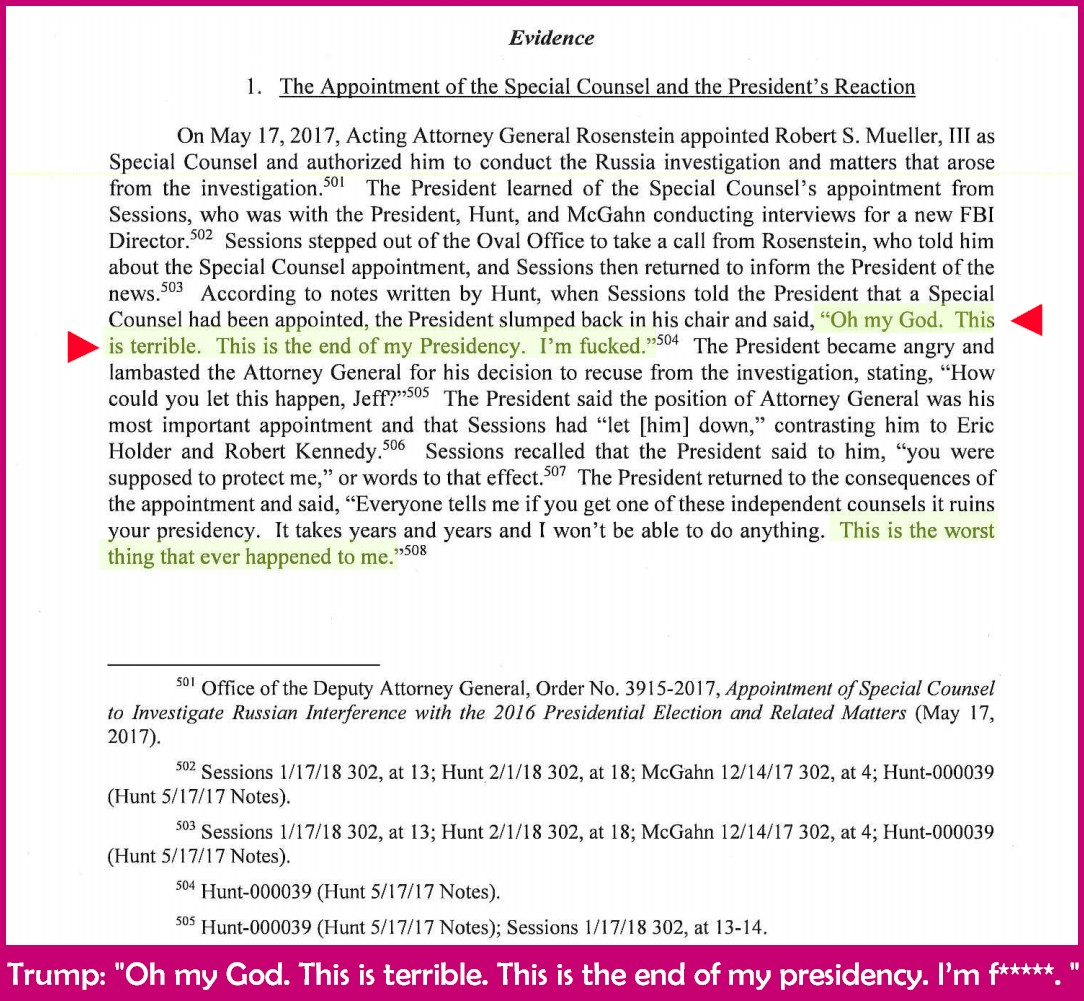