Doctors and scientists, including Dr. Scott Gottlieb, Pfizer board member and former commissioner of the US FDA, have said about the Delta variant of SARS2 that ‘Regions with low vaccination rates will be hardest hit‘.

On Friday the WHO said “Delta is the most transmissible of the variants identified so far. [Delta] has been identified in at least 85 countries, and is spreading rapidly among unvaccinated populations. As some countries ease public health and social measures, we are starting to see increases in transmission around the world. It’s quite simple: more transmission, more variants. Less transmission, less variants,” said WHO officials in a Friday briefing.

Last week the Health Ministry of India said, “Indian SARS-CoV-2 Genomic Consortia has informed that the Delta Plus Variant, currently a Variant of Interest (VOI), has the following characteristics:

“B.1.617.2.1, has led to an increase in cases in India. It has also been detected in the U.S., U.K., China, Japan, Poland, Portugal, Russia, and Switzerland,” reports WebMD, a popular medical journal.

Typical response of doctors to the news of the Delta Plus strain of SARS2 is, “There will be variants but stress that the novel coronavirus is fought the same way. Get fully vaccinated.”

Speaking to US TV reporters at NBC News, on Sunday, Dr. Rachael Lee, an assistant professor of medicine at the University of Alabama at Birmingham said, “I think it’s hard for some people to understand that this [COVID-19] has not gone away. And it’s easy to forget that we’re seeing the spread of these variants, and the delta variant in particular.”

Enough time has passed to allow evidence-based research on what has been called the “Delta” variant by the World Health Organization (WHO).

A study conducted by scientists of real world SARS-CoV-2 Delta-variant data versus laboratory studies, was published in the Lancet on 14 June 2021.

“We show that the Delta VOC in Scotland was found mainly in younger, more affluent groups. Risk of COVID-19 hospital admission was approximately doubled in those with the Delta VOC when compared to the Alpha VOC, with risk of [hospital] admission particularly increased in those with five or more relevant comorbidities. Both the Oxford–AstraZeneca and Pfizer–BioNTech COVID-19 vaccines were effective in reducing the risk of SARS-CoV-2 infection and COVID-19 hospitalisation in people with the Delta VOC, but these effects on infection appeared to be diminished when compared to those with the Alpha VOC.”  Citing “SARS-CoV-2 Delta VOC in Scotland: demographics, risk of hospital admission, and vaccine effectiveness“

“SARS-CoV-2, the virus which causes Covid-19 is evolving and mutating all the time, as do all similar viruses,” Professor Tom Solomon, Director of the Health Protection Research Unit in Emerging and Zoonotic Infections, at the University of Liverpool in Great Britain said.

The Delta Variant is a “suite of nine mutations in the gene encoding spike, the protein that studs the virus’ surface and allows it to invade human cells,” reports science writers Kai Kupferschmidt and Meredith Wadman in Science Magazine. The authors rely on scientific research published here:  “The SARS-CoV-2 variants associated with infections in India, B.1.617, show enhanced spike cleavage by furin ll” 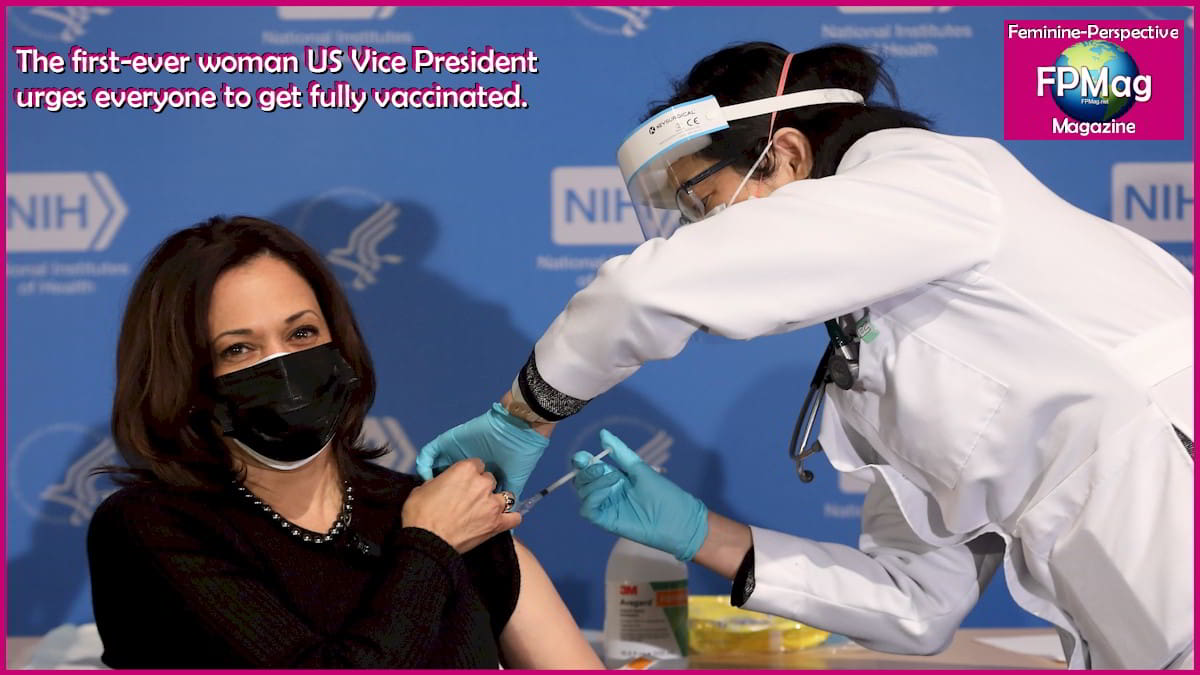 The first-ever woman US Vice President urges everyone to get fully vaccinated. Vice President of the United States Kamala Harris received her second dose of the Moderna, Inc., COVID-19 vaccine, at NIH on 26 January 2021. Doctors have said about the Delta variant of SARS2 that ‘regions with low vaccination rates will be hardest hit’, insisting that vaccination rates need to be upped.
Photo Credit: NIH/Chiachi Chang
Art/Cropping/Enhancement: Rosa Yamamoto FPMag

On the weekend, FPMag assembled a medical advisory group of three doctors, two nurse practitioners, and one PPE specialist into a Zoom conference.

The most repeated reaction to the Delta variant, was “Fully vaccinate”, referring to the two-inoculation vaccines. “People need to make certain they get their second dose of the vaccine which is needed to respond to the more transmissible and deadly variants,” said Dr. Anderson of The RINJ Foundation.

“It’s not going to be as pervasive,” Dr. Scott Gottlieb, member of the boards of Pfizer and biotech company Illumina, plus a former commissioner of the US Food and Drug Administration, said Sunday on CBS’s Face the Nation.

“It’s going to hyper-regionalize. There’s certain pockets of the country where you’re going to have very dense outbreaks. Those pockets will be ones with low vaccination rates and low rates of prior infection,” Gottlieb added, “like in many rural and southern communities.”

“This variant is probably 40 to 60% more effective, more contagious, than the B1.1.7 variant, that variant that became prevalent in the United States and caused that surge in the late spring. 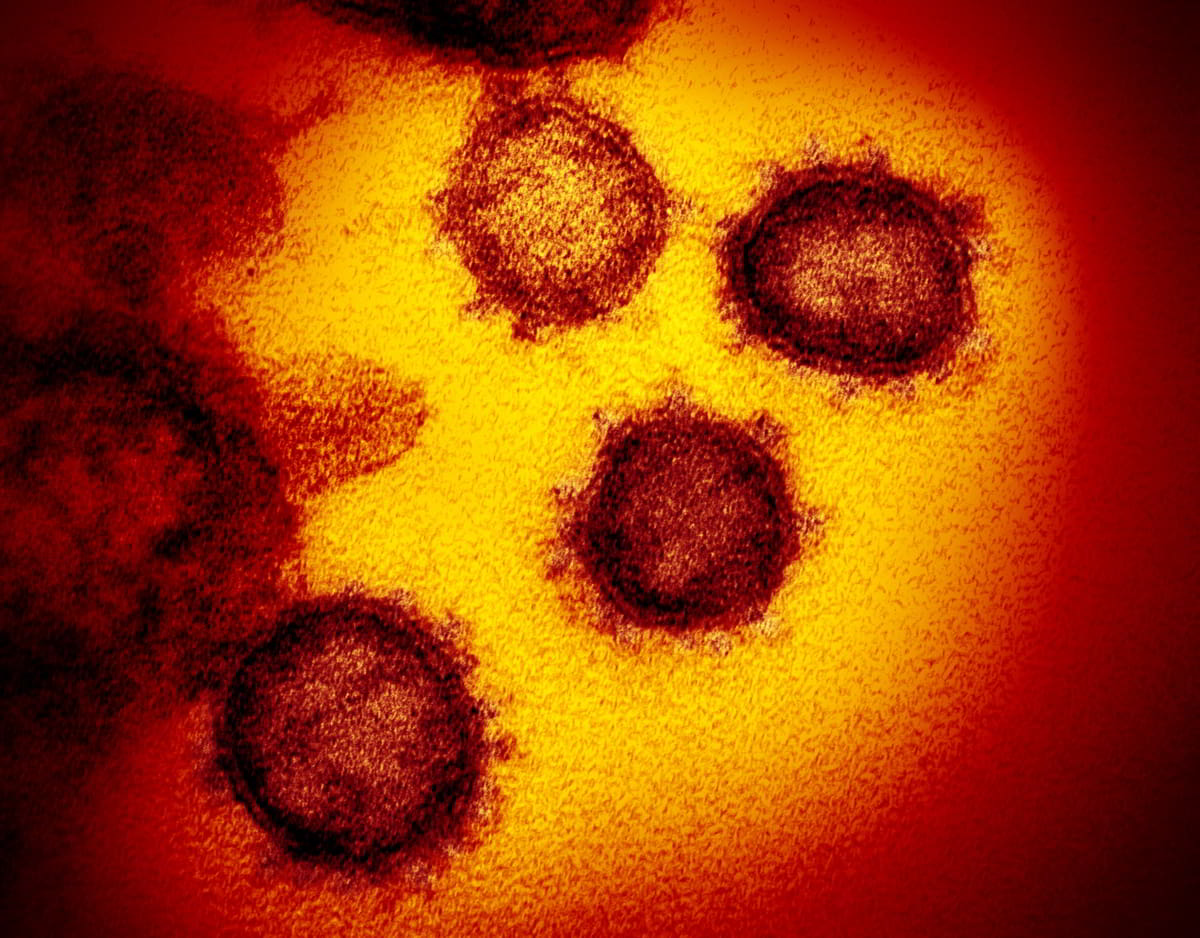 This transmission electron microscope image shows SARS-CoV-2—also known as SARS2
the virus that causes COVID-19, isolated from a patient in the U.S., emerging from the surface of cells cultured in the lab. Photo Credit: Image captured and colorized at NIAID’s Rocky Mountain Laboratories (RML) in Hamilton, Montana. Photo Credit: NIAID

“It doesn’t necessarily appear more pathogenic, meaning more dangerous, but it’s infecting people more easily and it’s starting to become very prevalent in the UK in communities that are unvaccinated,” continued Dr. Scott Gottlieb, member of the board of Pfizer and former FDA Czar.

“So kids, for example, young people, seem to be the population that’s spreading it in the United Kingdom. And when we look across the United States, we see wide variance in terms of vaccination rates. Some states like Vermont or Connecticut have very high vaccination rates above 80%. Other states are struggling to get to 50%,” said Dr. Gottlieb about the USA COVID-19 vaccination scene.

“And when you look at the modeling that’s circulating right now among epidemiologists about what we face in the fall, they are predicting that in a scenario where we only get to about 75% of the eligible population vaccinated and have a 60% more transmissible variant, which this new Delta variant may be 60% more transmissible than 1.1.7, they do show an upsurge of infection and reaching a peak of around 20% of the infection that we reached last winter. So about 20% of the peak in January, we will hit in the- in the fall at some point,” said Dr. Gottlieb about the USA COVID-19 situation. (The full transcript is here.)

US President Biden has focussed intently on getting people Vaccinated. 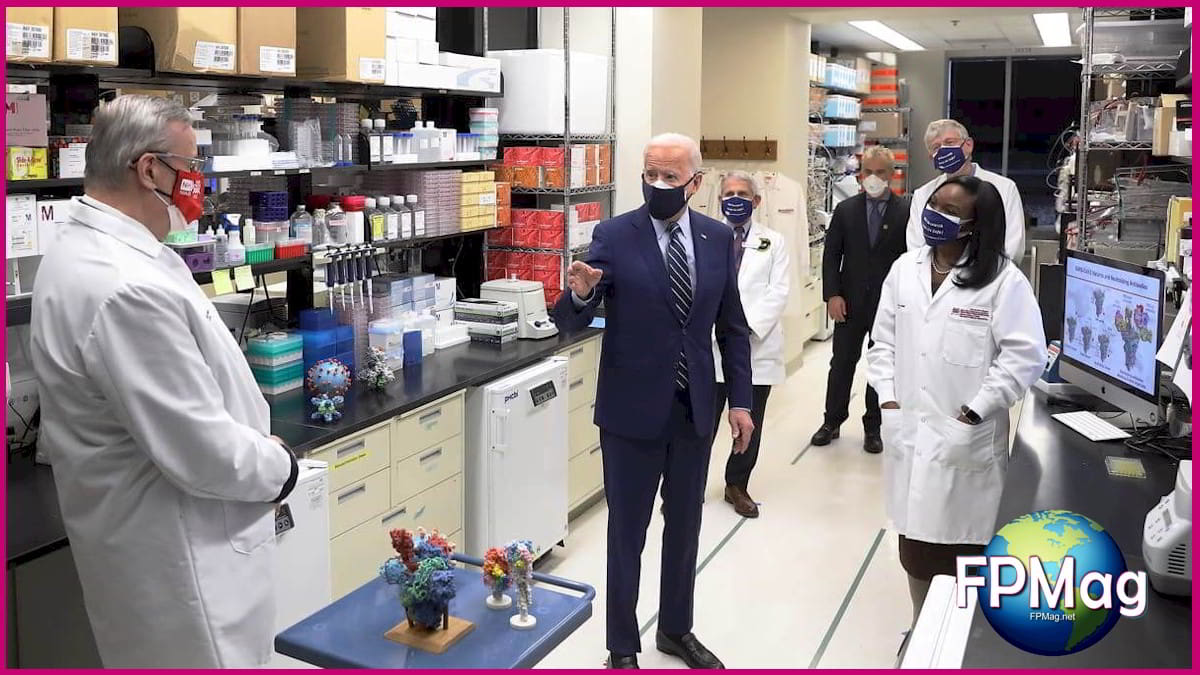