Clarity on origin of SARS-COV2 is necessary and feasible

“Greater clarity about the origins of this pandemic is necessary and feasible to achieve,” says a 14 May letter, signed by David Relman, a microbiologist at Stanford University, plus 17 other scientists (listed below).

“We must take hypotheses about both natural and laboratory spillovers seriously until we have sufficient data.

“A proper investigation should be transparent, objective, data-driven, inclusive of broad expertise, subject to independent oversight, and responsibly managed to minimize the impact of conflicts of interest. Public health agencies and research laboratories alike need to open their records to the public. Investigators should document the veracity and provenance of data from which analyses are conducted and conclusions drawn, so that analyses are reproducible by independent experts,” concludes a statement made in letter form on 14 May 2021, to the world.

“We were unarmed. We must learn more about the next possible infectious diseases plus those we already treated, all my colleagues agree,” says Sara Qin, a team-lead nurse who helped fight the pandemic in Wuhan. A graduate of the Wuhan University and the Chinese Academy Of Sciences, ‘Sara Qin’, is her Anglicized name.

“Geo-politically neutral scientists still say the SARS-CoV2 is a zoonotic that has jumped from one mammal, to another, to another, for example from a bat to a pangolin to humans. Stop eating bats and pangolins, world,” she suggested, “but we need to learn more,” she added.

“We must all become healthy vegan anyway, to fight climate change, so this will not be hard for Asians to accomplish, because we all want to fix our planet,” nurse Qin urged.

The Bat World is ancient and complicated, as are at least 3,200 coronaviruses.

A report in the Lancet entitled “The origin of SARS-CoV-2“ sets out that:

“Researchers examining coronaviruses and bats are used to working with large numbers. A 2017 study of 12,333 bats from Latin America, Africa, and Asia found that almost 9% carried at least one of 91 distinct coronaviruses. The authors estimated that there are at least 3200 coronaviruses that infect bats. Moreover, there are over 1,400 species of bat. Figuring out which ones are susceptible to which coronaviruses is no small task. Bats are incredibly varied and successful creatures. In evolutionary terms, fruit-eating bats diverged from insect-eating bats some 50 million years ago.”

“The picture becomes even more complicated when we start to consider which bat viruses are likely to pose a threat to human beings.” Citing: Talha Burki, “The origin of SARS-CoV-2“

“Going after bats will only give you partial information—the viruses you are looking at may or may not get the additional mutations they need to be transmissible among humans”, explains Stanley Perlman, professor of microbiology and immunology at the University of Iowa, IA, USA.

“There has almost always been an intermediary involved, and without knowing what that is and what changes the virus would have to undergo, it is very hard to make any kind of predictions,”  Professor Perlman adds.

‘The Wuhan Lab Leak’ theory versus the theory ‘Americans launched a bioweapon attack against China’.

“To this day, the people who run the ‘Wuhan lab’, say that no persons from their Wuhan Virology Institute became unusually sick during November and December of 2019,” adds nurse Qin who currently is working in a hospital in Shenzhen, China but remains in contact with her colleagues from Wuhan academia.

Dr. Shi Zhengli, a virologist at the Wuhan Institute of Virology, recently said to the New York Times via smartphone, “How on earth can I offer up evidence for something where there is no evidence?” she said.

“I don’t know how the world has come to this, constantly pouring filth on an innocent scientist,” Dr. Shi wrote in a text message.

“The Mission of Wuhan Institute of Virology is to spearhead scientific  research on Viruses for the benefit of all the world’s citizens .  The Institute had nothing to do with the origin of the SARS-CoV2 virus. In fact we are completely focussed on the eradication,” says Professor Yanyi Wang.

“It is unfortunate that we have been targeted as a scapegoat, ” she added. 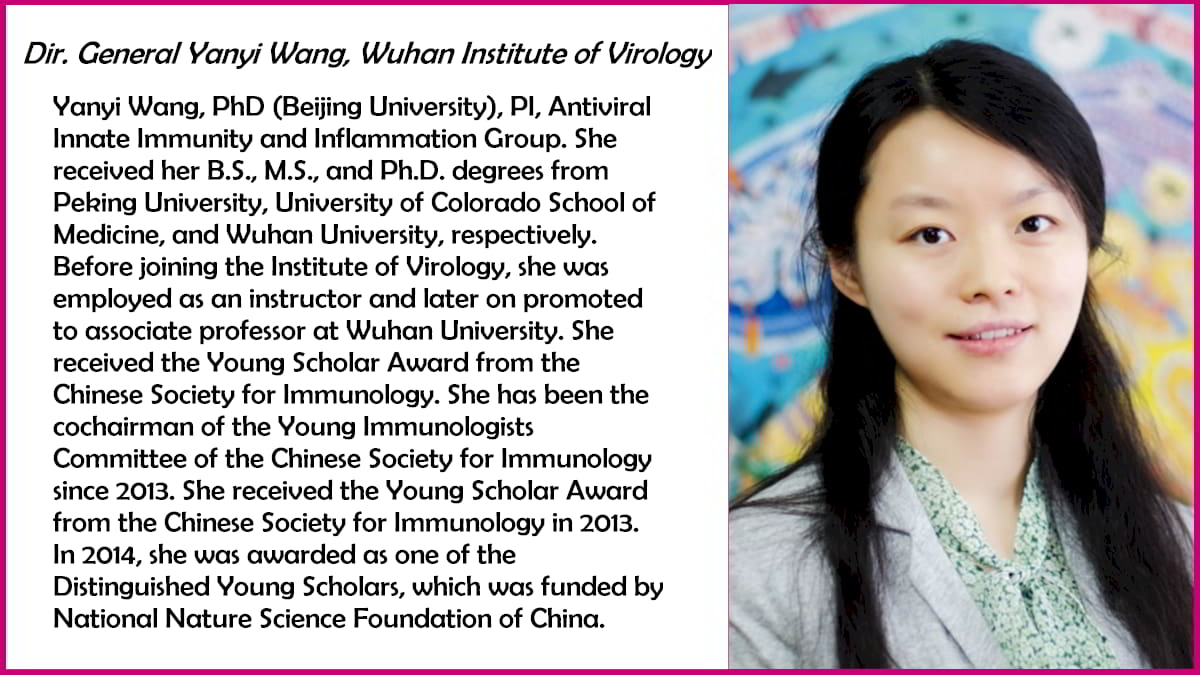 Greater clarity about the origins of this pandemic is necessary and feasible to achieve,” says Dr. David Relman,