Xi Jinping’s xiaokang plan established a respectable image of China. Xiaokang is a Chinese term, meaning “moderately prosperous society” a concept of Confucianism. In December 1979, Deng Xiaoping, then leader of China, proposed the idea of “xiaokang”. Xi Jinping is said to subscribe to this philosophy with enthusiastic adherence. In fact, Xi Jinping is reportedly disenchanted with Mao and favours much of the thinking of Deng Xiaoping.

President Xi Jinping is actually an extraordinary leader of China but occasionally he demonstrates pure folly in his pursuit of CCP fanaticisms that are devoid of logic. Xiaokang is indeed what has made China respected and a return to that focus for the 100th anniversary of the CCP would be a significant achievement for President Xi, much better than the path for war upon which he has currently embarked.

“The concept of “Xiaokang” took root 2,500 years ago, which represents ancient Chinese people’s longing for a peaceful and happy life,” writes Editor Zhang Huaxia in Xinhuanet .

According to the Qiushi, the Chinese Dream is about Chinese prosperity, collective effort, socialism, and national glory. Go for that instead of invading other people’s lands.

by Katie Alsop and Micheal John 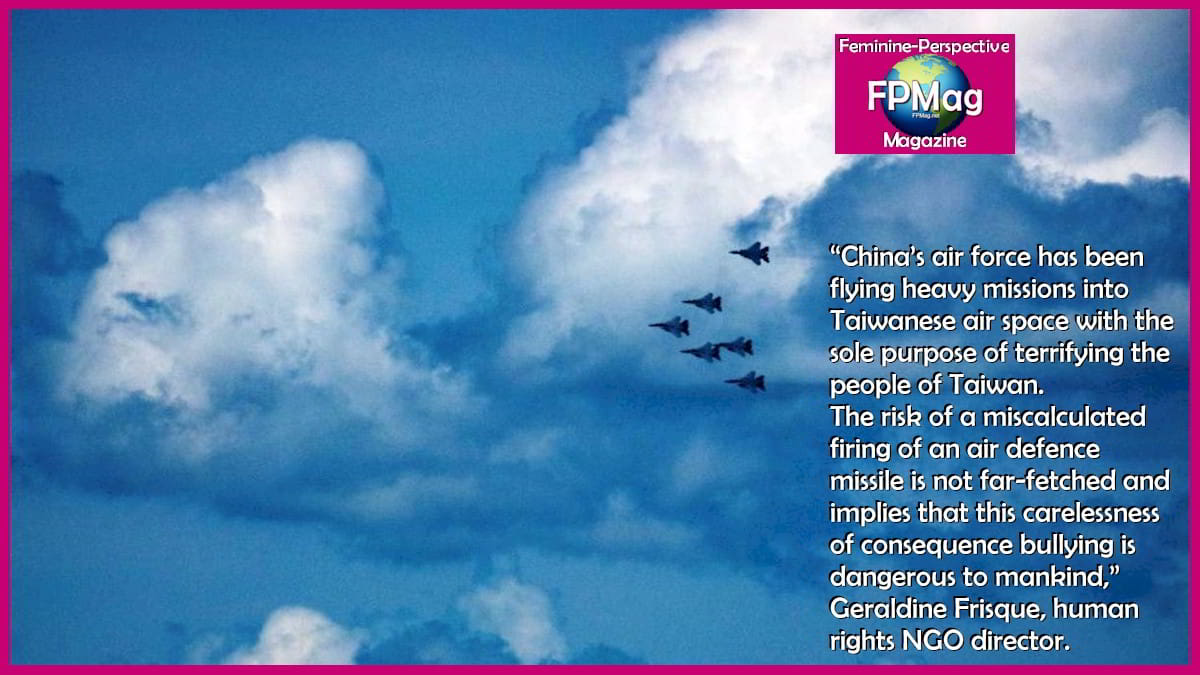 In this photograph taken 13 June, aircraft fly in formation as part of the rehearsal for the upcoming National Day Parade flying display in Singapore on June 17, 2021. Singapore celebrates its independence day every year on Aug. 9. Photo Credit: Then Chih Wey/Xinhua. Art/Cropping/Enhancement: Rosa Yamamoto FPMag

The Picture and its story: “China’s air force has been flying heavy missions into Taiwanese air space with the sole purpose of terrifying the people of Taiwan. The risk of a miscalculated firing of an air defence missile is not far-fetched and implies that this carelessness of consequence bullying is dangerous to mankind,” said Geraldine Frisque, a human rights NGO director.

“Choose words, like friends, wisely because the things one says and does today will govern how lives go forward,” said a paragon of Chinese sages.

Mao Zedong should have grasped what Confucius was saying, long ago.

Words count, hence when Chairman Mao, in 1949, as the leader of communist civil-war forces took over mainland China, he should not have allowed rage to rule his tongue.  He said that the communist ‘People’s Republic of China’ was not the ‘Republic of China’, and that he was done with the island of Taiwan. Simultaneously the day was done on the “one China” theory.

Mao got the mainland and his opponent got the island of Taiwan. This kept Mao very busy.

Chiang Kai-shek, a dictatorial autocrat, may have been solely responsible for establishing the ‘Republic of China’ in the first place, on the mainland, in 1925 under the banner of a nationalist, somewhat conservative, political party that adhered to a doctrine of brutality and corruption. He later moved his seat of power to Taipei, Taiwan completing the move in 1949.

“Mao’s speech from atop Tiananmen gate on 1 October 1949, announcing the formation of the People’s Republic of China (PRC), augured a bright Communist future for the Chinese people who had suffered decades of warfare, runaway inflation, and misgovernment. Whereas the previous Guomindang (GMD) government of Chiang Kai-shek had rested on the support of Chinese elites, Mao implemented, on a national scale, policies that made him popular among the masses, including reducing rents and redistributing land to farmers in the countryside. The reorganization of Chinese society under the Chinese Communist Party (CCP) necessitated the classification of China’s vast population into discrete groups such as peasants, landlords, laborers, capitalists, etc., followed by the issuance of registration cards and assignment to a danwei, or work unit.

“These measures served as the mechanism for state oversight of everything from food rations to housing to marriage, while at the same time ensuring complicity with state directives and mobilization for mass political campaigns. Initially, these mass campaigns were aimed at—and effectively combated—social vices such as opium addiction and prostitution, but soon, campaigns targeted enemies of the revolution and, during the Korean War (1950–1953), the party galvanized the population to protect its North Korean ally against the American-led United Nations.

These successes bolstered faith in the [communist] party and primed the Chinese population for supporting radical programs that promised to raise China from the feudal to the Socialist, and eventually Communist, stages of social evolution,” writes Clayton D. Brown for the “The Association for Asian Studies“, in 2012.

There is no reversing what happened. The People of Taiwan built their country and Taiwan is theirs.

Taiwan conducted its national affairs according to Mao’s separation edict in the decades since and no fair adjudication could possibly reverse that on a whim today. The people of Taiwan have repeatedly said ‘No, thank you,” to the People’s Republic of China’s urgings to rejoin as one.

Taiwan and China separated under Chiang Kai-shek and Mao Zedong. Since then the two nations struggled at first but both were destined for independent success.

The former leader (President Chiang) is remembered today as a good friend of US President Eisenhower and the latter (Mao) is a renowned mass-murderer.

Mao has been accused of being the most murderous scoundrel of the 20th century who killed well over 80 million Chinese in a bid to ‘rescue’ China’s peasantry from the warlord fiefdoms of the past and from alleged-dictator Chiang Kai-shek’s alleged “brutality and corruption”.

Chairman Mao, according to research by Valerie Strauss and Daniel Southerl for a Washington Post article published on July 17, 1994, the data obtained from archives indicates that, “the two people most associated with mass deaths in this bloodiest of human centuries—Adolf Hitler and Joseph Stalin—were likely surpassed by a third, China’s Mao Zedong”.

The two nations, China and Taiwan have been trading partners since 1949, but from time to time, leaders who followed Chairman Mao have tried to reverse his decisions, as they all seem to maintain a hate for Chiang Kai-shek and taking back Taiwan would make them the winners?

President Chiang took Taiwan away from mainland China with Mao’s reluctant consent if not blessings.

Chiang Kai-shek, a decidedly colourful character had fought the communists led by Mao in a civil war, lost, and moved the seat of power of the Republic of China to Taipei for the end of the 1940s, and the eccentric and brutal Chairman Mao took over mainland China as “The People’s Republic of China” and completely denounced the island of Taiwan. He wanted nothing to do with Mr. Chiang who had actually claimed that mainland China was being ruled from Taipei and not Beijing.

Mr. Chiang despised Mao Zedong and his Marxist/Leninist ‘Maoism’ that ended up killing over 80 million Chinese or more.

Chiang Kai-shek is an historical figure in both a political and military context who was instrumental as an opposition force at times, in taking China from a warlord era to China’s mainland unification which was eventually achieved by the Communist Party of China in the most bloody manner ever seen in all of known history.

Today, “One China” is as solid as the “Flat-Earth” theory.

One needs to be a fanatic, with loose psychological bindings to reality, in order to exalt Chairman Mao and rely on Mao as a character model. Mao was an exasperating lunatic.

The world is starting to see that emerge. Some of Xi Jinping’s declarations about the so-called “nine-dash-line” and China’s concomitant claim of a 200 NM Exclusive Economic Zone around each piece of turf, coral and sea turtle’s ass in the South China Sea suggest fanaticism to the point of moorings slippage.

Xi Jinping’s Xiaokang plan was a better global example then the patriarchal bullying fire-starter bullshit we are all seeing now. This cannot be. And it will not be for long. That is the will of the global community: peace and harmony or hit the road, Jack.