CSPaC predicting a milder-outcome SARS2 surge in Canada by mid-August and possible fourth wave in the fall.

Predicted to start in August, periodic regional COVID-19 case spikes in Canada will be due to the Delta variant and relaxed mitigation, data now confirms.

The change is slight but the meaning is significant. Both the CSPaC and the IHME have predicted periodic COVID-19 case spikes in Canada due to the Delta variant, starting in August. Today the data is indicating exactly that, says biostatistician, Fred Harris, in Singapore.

Ontario, Alberta in particular, and British Columbia have, despite a long decline in active cases and deaths, with Quebec close behind, reached over 1000 in active COVID-19 cases in recent days despite a significant drop in testing, said Dr. Harris in an email response to FPMag questions.

“The situation is likely worse than the data indicates says the biostatistician, and confirmed by Canadian public health officials, according to the Canadian Broadcasting Corporation.

Dr. Theresa Tam, Canada’s chief public health officer, said on Friday, “While most jurisdictions, remain out of the epidemic growth pattern, some are showing signs of increased disease activity and Rt [infection spread per infected person] trending above one, as restrictions have been eased,” she said. “This growth is not unexpected, but it will be important to respond to new cases and clusters through testing, case finding and targeted vaccination efforts to slow the spread.”

“If Rt remains persistently above one for several weeks,” Dr. Tam continued, “with predominance of the highly contagious Delta variant, we could expect to see a return to rapid epidemic growth, particularly as measures that slow the spread are eased.”

Confirming Dr. Harris’ concerns, “case numbers and positivity rates [in Alberta] are currently low, but surging, driven by the more infectious delta variant. Alberta had 1,173 active cases on Tuesday [reaching 1,655 on Friday] with a test positivity rate of 2.54 per cent.  “Those are all indicators that we’re on our way to a fourth wave,” said Dr. James Talbot, a former chief medical officer for the province and a public health adjunct professor at the University of Alberta, the state-sponsored CBC reported. 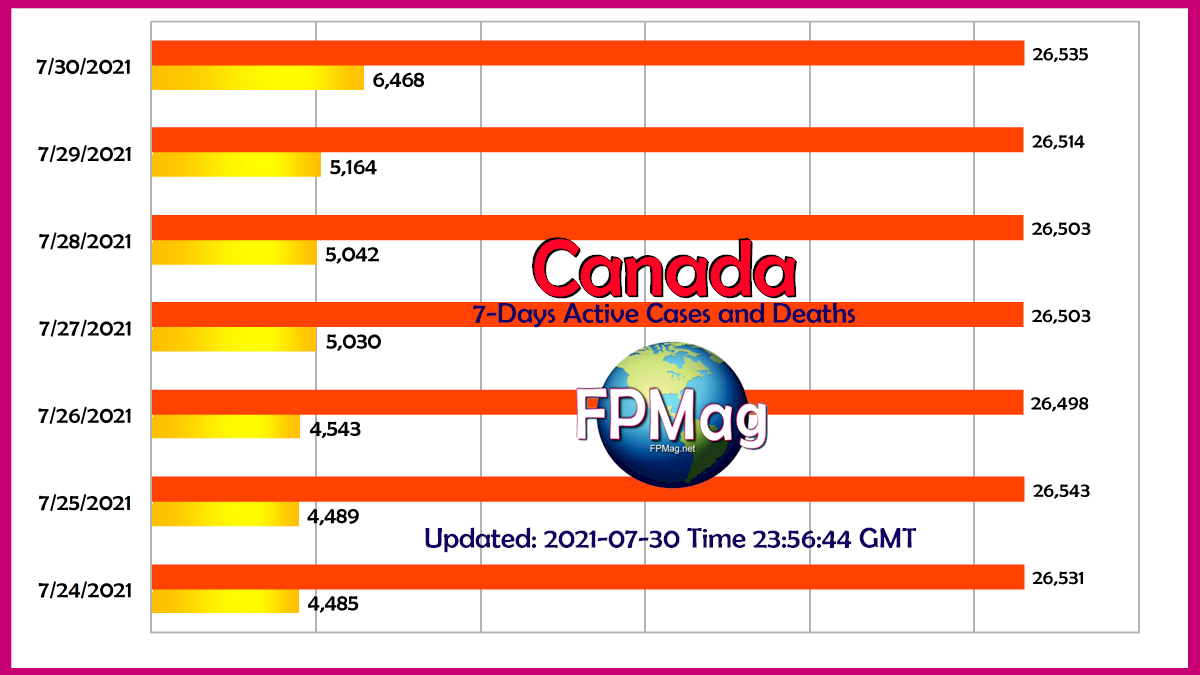 The B.1.617.2 ‘India’ (delta) variant of SARS-CoV-2 has begun circulating a little in Canada and in 100+ other countries according to the World Health Organization. It is unknown what impact that will have on Canada which is having a very successful vaccination programme. despite the efficacy of vaccines, mask wearing is indicated, according to experts.

Video: ABC is reporting that the USA is asking all persons, vaccinated or not to wear masks indoors. Predicting surges in areas where vaccinations are the lowest.

The upturn in active cases is expected as COVID-19 mitigation efforts are relaxed, suggests CSPaC expert.

“We have observed a slight change over two weeks where demographics and genomics suggest the importation of the Delta variant which is significantly more infectious than the Alpha variant that was predominant in Canada this past spring. Canada will not escape a surge caused by the Delta variant and it is possible the country could face a fourth wave of new infections in the fall, but hopefully nothing like the monstrous two waves experienced to date. Getting vaccinated and wearing masks is what the global communities’ experts are urging to deny new infections and more mutations,” said Fred Harris, biostatistician and infectious disease researcher based in Singapore for the Civil Society Partners against COVID19.

Graph shows a slight increase in daily active cases in Canada over the past three days. 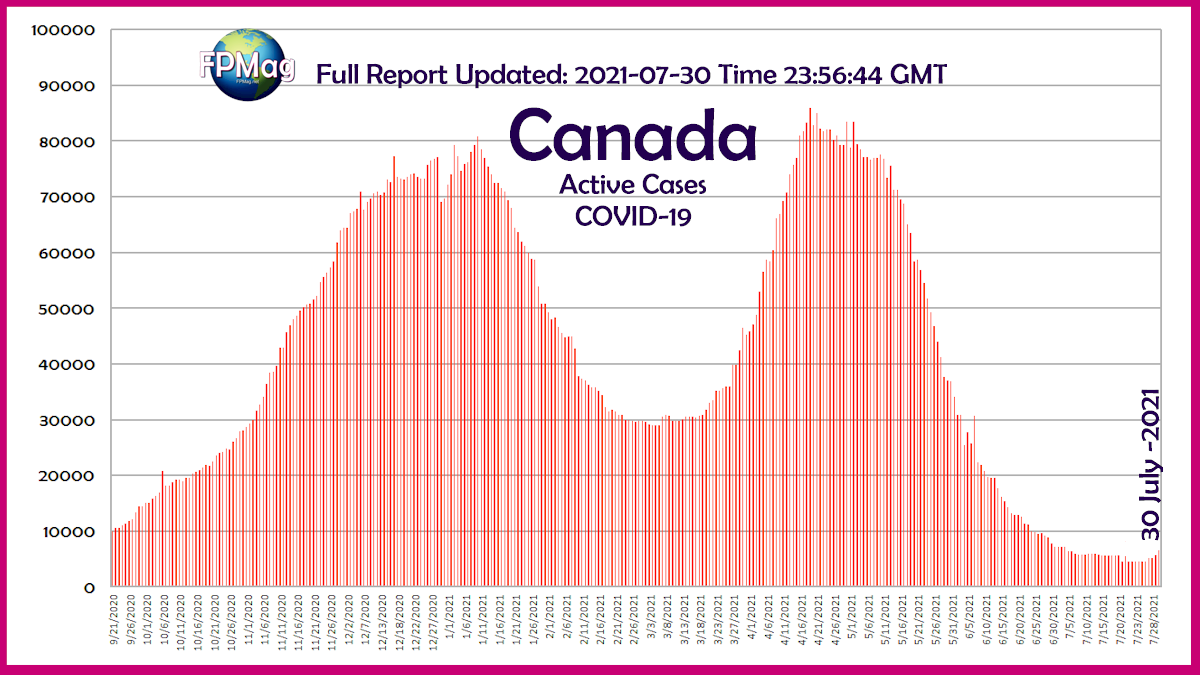 In parts of Canada the Rt has reached R2 according to Provincial Public Health Units. 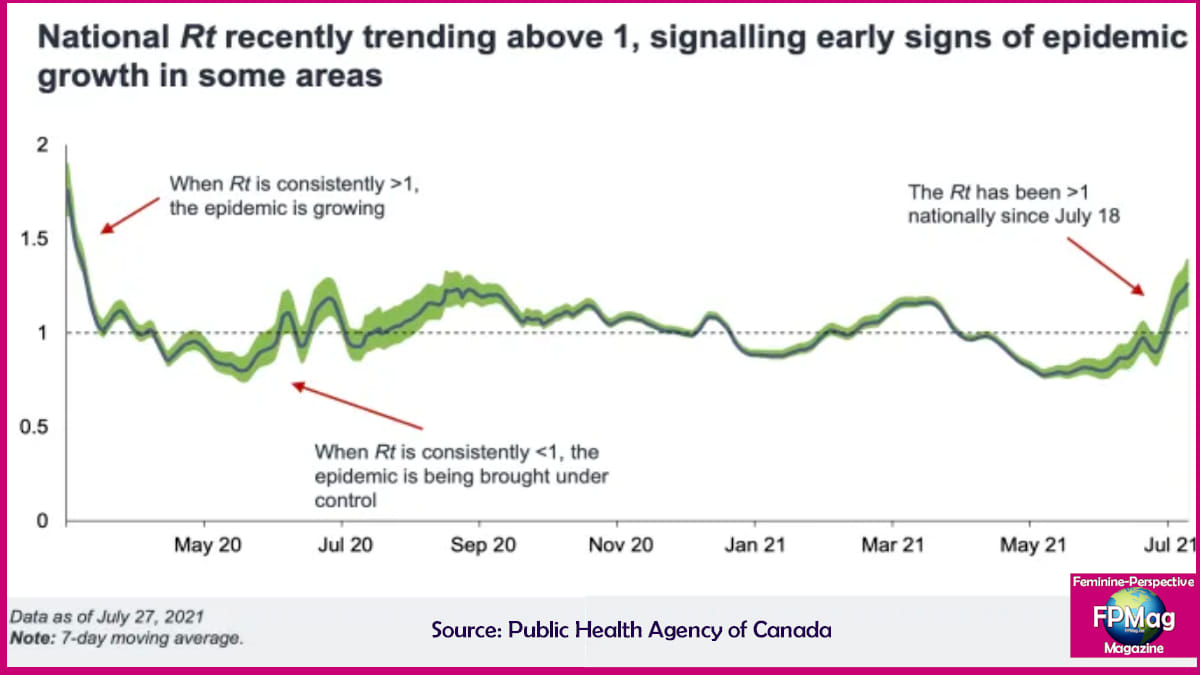 Dr. Theresa Tam, Canada’s chief public health officer, said on Friday, “While most jurisdictions, remain out of the epidemic growth pattern, some are showing signs of increased disease activity and Rt [infection spread per infected person] trending above one, as restrictions have been eased,” she said. “This growth is not unexpected, but it will be important to respond to new cases and clusters through testing, case finding and targeted vaccination efforts to slow the spread.” Source: Public Health Canada