Since 2019, the 10-member ASEAN group of nations have been working with China to create a code of operational conduct for the Asian seas known in part by various countries as the South China Sea and the West Philippine Sea. A useful naming convention would be the “Asian seas” for disambiguation. (A global consortium of activists seeks to rename the South and East China Sea to Asian Sea.)

This past Wednesday, with a failed attempt to reach a consensus with China on the South China Seas code of conduct regime discussed, a straw poll of available delegate nations suggests it is not going to happen. In fact, one diplomat, who doesn’t want to be named, offered an opinion saying the process Beijing has created over the past two years, “eliminates the Paracel  Islands, probably because of Taiwan’s claims, but something that is much needed to have a complete operating code, and also Beijing eliminates the United States completely, but the US is a major user of the waterways and has been keeping them open.”

China had set a goal of 2021 for the completion of the South China Sea Code of Conduct. The parties said they agreed to return for further discussions but without any date being determined.

Vietnam, the Philippines, Taiwan, Malaysia and Brunei each have competing claims in this busiest of waterways in the world and the United States and many NATO members are plying the waters trying to keep the South China Sea open because it carries about one third of  the world’s cargo sea traffic. Without that cargo flow there would be unprecedented shortages of food and medicine around the world, according to the ‘Demilitarize the South China Sea’ consortium.

During a June Webinar, “ASEAN at the Crossroads: Fostering Strengths for Addressing Regional Issues”, hosted by the Stimson Center and the Mekong Environment Forum, there was not much hope expressed for a code of conduct resolution, something that has escaped the region despite numerous attempts over two decades, according to the Webinar conversations.

“ASEAN simply cannot restrain China’s actions in the Spratlys and Vietnam wants to include the Paracels but Beijing’s brazen acts undermines all trust,” said Bill Hayton, associate fellow at Chatham House in London.

Read also: Philippines Scarborough Shoal loss is tragic due to loss of food

Meanwhile, the American Navy with partners from NATO and Australasia states, works to keep the sea-lanes open.

According to the US State Department’s spokesperson Ned Price, “Secretary of State Antony J. Blinken spoke with foreign ministers of the Association of Southeast Asian Nations (ASEAN) and the ASEAN Secretary General during the Special ASEAN-U.S. Foreign Ministerial Meeting.”

Secretary Blinken “underscored the United States’ rejection of the PRC’s unlawful maritime claims in the South China Sea and reiterated that the United States stands with Southeast Asian claimants in the face of PRC coercion. He [Blinken] pledged continued U.S. support for a free and open Mekong region under the Mekong-U.S. Partnership.

“Expressing deep concerns about the military coup in Burma, Secretary Blinken recalled the principles of the ASEAN Charter related to the rule of law, good governance, democracy, and human rights. He [Blinken] called on ASEAN to take joint action to urge the end of violence, the restoration of Burma’s democratic transition, and the release of all those unjustly detained. The Secretary said that ASEAN ’s five-point consensus is an important step forward and urged ASEAN to take immediate action to hold the Burmese regime accountable to the consensus and to appoint a special envoy,” said Mr. Price in a written statement.

“On this Pacific Pulse 16 July US Military radio broadcast, more than 25 aircraft deploy to USINDOPACOM for exercise Pacific Iron 21, the USS Benfold asserts navigational rights and freedoms within the vicinity of the paracel islands, and exercise Orient Shield 21 comes to a close.”

SOUTH CHINA SEA (14 June 2021) An EA-18G Growler attached to the Shadowhawks of Electronic Attack Squadron (VAQ) 141 launches from the flight deck of the U.S. Navy’s only forward-deployed aircraft carrier USS Ronald Reagan (CVN 76). Ronald Reagan, the flagship of Carrier Strike Group 5, provides a combat-ready force that protects and defends the United States, as well as the collective maritime interests of its allies and partners in the Indo-Pacific region. (U.S. Navy photo by Mass Communication Specialist 3rd Class Quinton Lee)

According to the Asia Maritime Transparency Initiative (AMTI), “Five claimants occupy nearly 70 disputed reefs and islets spread across the South China Sea. The five claimants have built more than 90 outposts on these contested features, many of which have seen expansion in recent years.”

“China, in recent years, has targeted Taiwan, Japan, Malaysia, the Philippines and Vietnam and the harassment is astoundingly bold and dangerous,” said Simon Baldock, an Israeli security analyst who has been studying the conflict since 2013. He spoke to FPMag via Signal app.

“Apart from themselves, like the divisive upheaval in Myanmar, which creates a dangerous distraction, China represents the number one security threat to the ASEAN nations, and their nearby allies like Japan and Taiwan,” said Mr. Baldock, a former IDF intelligence officer. 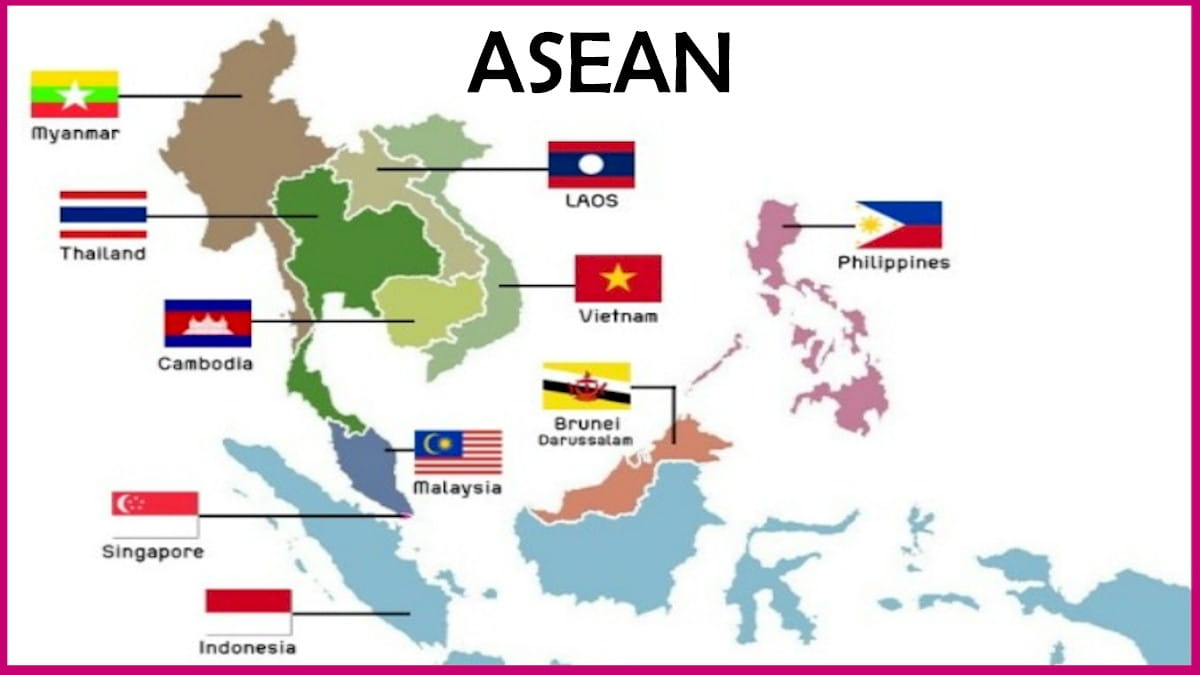 On 31 May 2021, the Royal Malaysian Air Force was forced to scramble interceptor jets against a formation of 16 People’s Liberation Army Air Force (PLAAF) aircraft in the Malaysian Maritime Zone (MMZ), nearing Beting Patinggi Ali on the Luconia Shoals.

Read also: Philippines needs to act fast or lose its stake in the Spratlys.

Five years was too long for Manila to let the 2016 arbitral decision in favour of the Philippines go to pasture. That is what many Philippines pundits are now saying, and many want the Rodrigo Duterte government to act strongly ASAP.

According to official releases from the Royal Malaysian Air Force (RMAF) its Air Defence Radar at the Air Defence Centre in Sarawak had tracked the intruders and the RMAF had scrambled its own jets to intercept the aircraft and unequivocally identified the intruders as PLAAF military transports.

About the overflight, China said through its Kuala Lumpur embassy that the Chinese military aircraft  abided by  relevant international law and did not enter the territorial airspace of any other country.

Foreign Ministry spokesperson Wang Wenbin, once again explaining a matter related to a serious diplomatic complaint about an alleged sovereignty violation by the Chinese military, said on 2 June that the sixteen aircraft were flying over the southern waters of the Spratly Islands.

Taiwan, in a statement, has condemned China flying missions in Taiwan’s airspace that would prepare China’s pilots to attack American warships as they traverse the Bashi Channel between the Philippines’ Luzon Island and Taiwan.

But China’s explanations of the sovereignty violations against Malaysia are betrayed by more recent transgressions.

Since the aircraft violation of Malaysian airspace, China Coast Guard (CCG) vessels have been contesting new Malaysian oil and gas development off the coast of Sarawak, Malaysia according to the Asia Maritime Transparency Initiative (AMTI).

According to its recent report (AMTI), “This is at least the third time since last spring that China has harassed Malaysian energy exploration. It demonstrates again Beijing’s persistence in challenging its neighbors’ oil and gas activities within their own exclusive economic zones. And the air patrol, which was likely not a coincidence, suggests Beijing’s willingness to engage in parallel escalation to pressure other claimants to back down.”

“The tensions revolve around development of the Kasawari gas field in Malaysia’s block SK316. First discovered in 2011, Kasawari has been under development for several years. The block sits approximately 4.3 nautical miles north of another gas field, NC3, which came online in 2016. Like NC3, the Kasawari field will feed into liquefied natural gas production facilities at Bintulu, Sarawak, 100 nautical miles to the south,” says the report by AMTI.

“From May 19 to 24,” continues the report, “Malaysia’s state-owned Petronas used six tugs to transport materials to the port of Miri in Sarawak in preparation for the installation of a wellhead platform at Kasawari. The Malaysian government announced this in advance through a notice to mariners, which would have put both local operators and China on alert. On June 1, just before the construction work at Kasawari was to begin, 16 Chinese military aircraft approached to within 60 nautical miles of Sarawak “flying in tactical formation.” Malaysian fighter jets scrambled from Labuan after the Chinese planes ignored attempts to communicate. After the incident, Malaysian foreign minister Hishamuddin Hussein erroneously stated that the aircraft had violated “Malaysian airspace and sovereignty,” summoned the Chinese ambassador to Malaysia, and vowed to file a diplomatic protest. The likely trigger for the patrol—and Malaysia’s angry reaction—was clear three days later.”

This data, above and below, shows a Chinese Coast Guard vessel operating near the Kasawari gas field off the coast of Malaysia’s Sarawak state on June 4, according to AMTI, soon after a pipe-laying vessel hired by Malaysia had arrived in the area.

AMTI has connected the Chinese air force overflight with repeated naval belligerence from China’s Coast Guard and Navy. This appears to be an attempt to discourage Malaysia’s  oil and gas explorations, says the think tank. 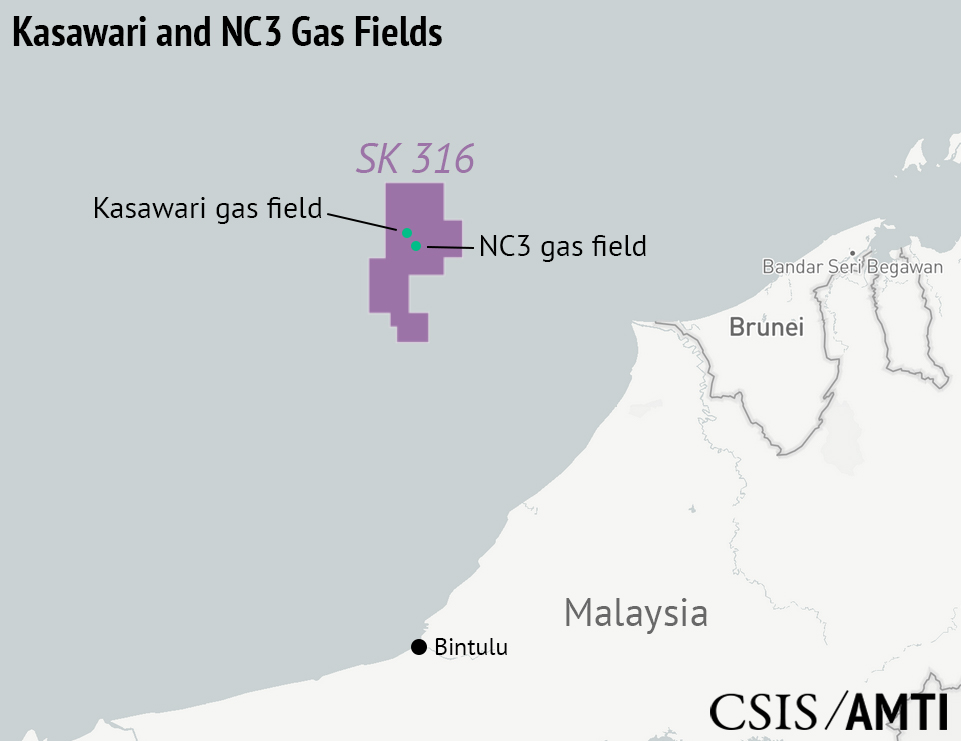