Proud Boys, one of US President Donald Trump’s illegal militia groups plus a few random rioters smashed windows at the Capitol Building on the House of Representatives side, driving Representatives and Senators under their desks and into closets and ante rooms.

Rioters, some armed according to a police officer inside the building who spoke to his fiance, a correspondent to Feminine-Perspective Magazine. 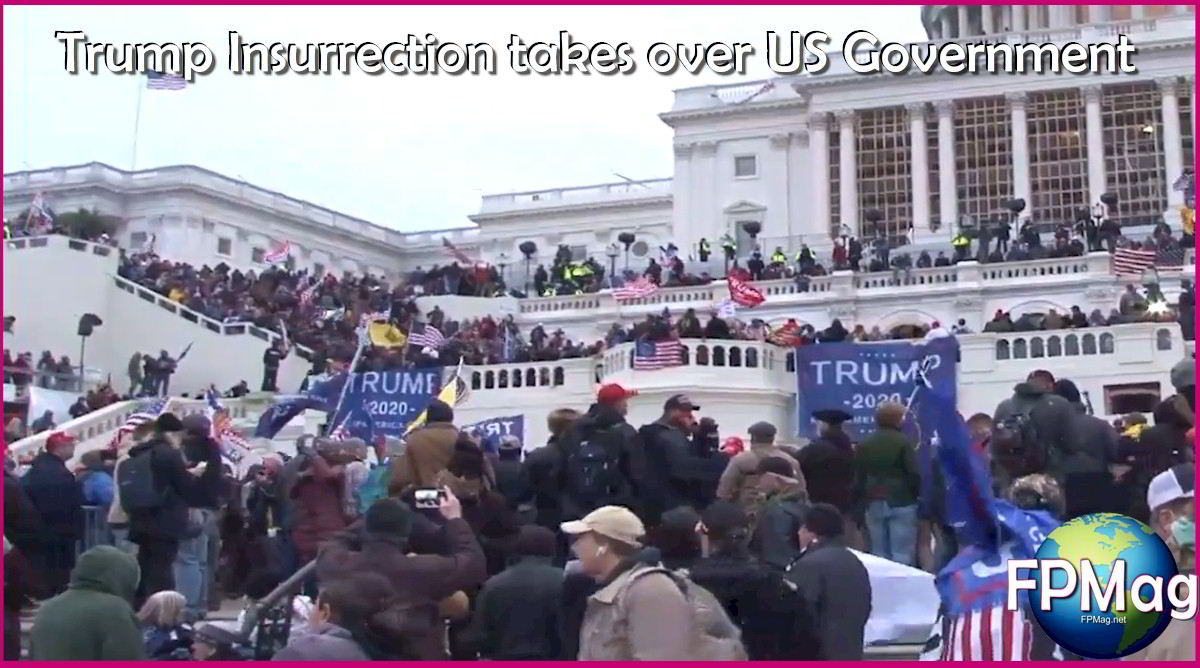 At a rally about an hour before rioters broke through police lines at the Capitol Building and broke into the building, Trump had urged them to go to Senate and House of Representatives to stop the ceremonial counting of Electoral College votes.  “We’re going to try and give our Republicans,” he said. “… the kind of pride and boldness that they need to take back our country.” Photo Credit: USA Today Live Video Capture.

Trump told thousands of protestors to march to the Capitol Building on Wednesday and thousands did. Their goal was to follow Trump’s instructions to stop the ceremonial counting of Electoral College that began at 1:00pm. Thousands succeeded in doing that. 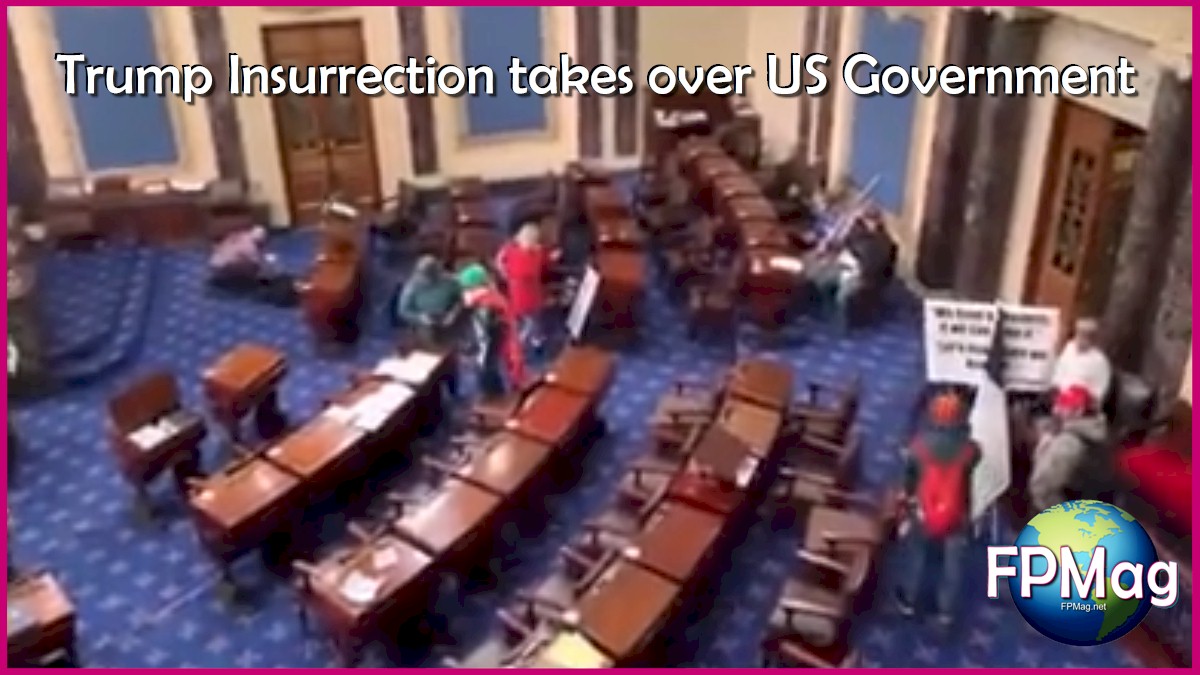 Police at the Capitol Building were overwhelmed by Trump rioters who shortly after 2:00 PM local time, under Trump’s apparent instructions, stormed the building, breaking windows, knocking down barriers and entering the building. An armed standoff began and Senators and Representatives were told to take refuge.

All official proceedings of government were stopped, but a statement issued jointly by elected officials vowed to resume their activities as soon as the Capitol Building has been seized back from the insurrection.

President-elect Biden said at 4:08PM local time, “Our democracy is under unprecedented assault… “An assault against the people’s representatives.”

“I call on this mob to pull back and allow the work of democracy,” said Biden.

Biden also firmly called on President Trump, “to go on National Television now!” and demand an end to this seige.

“Our Democracy is under Unprecedented Assault,” said Biden 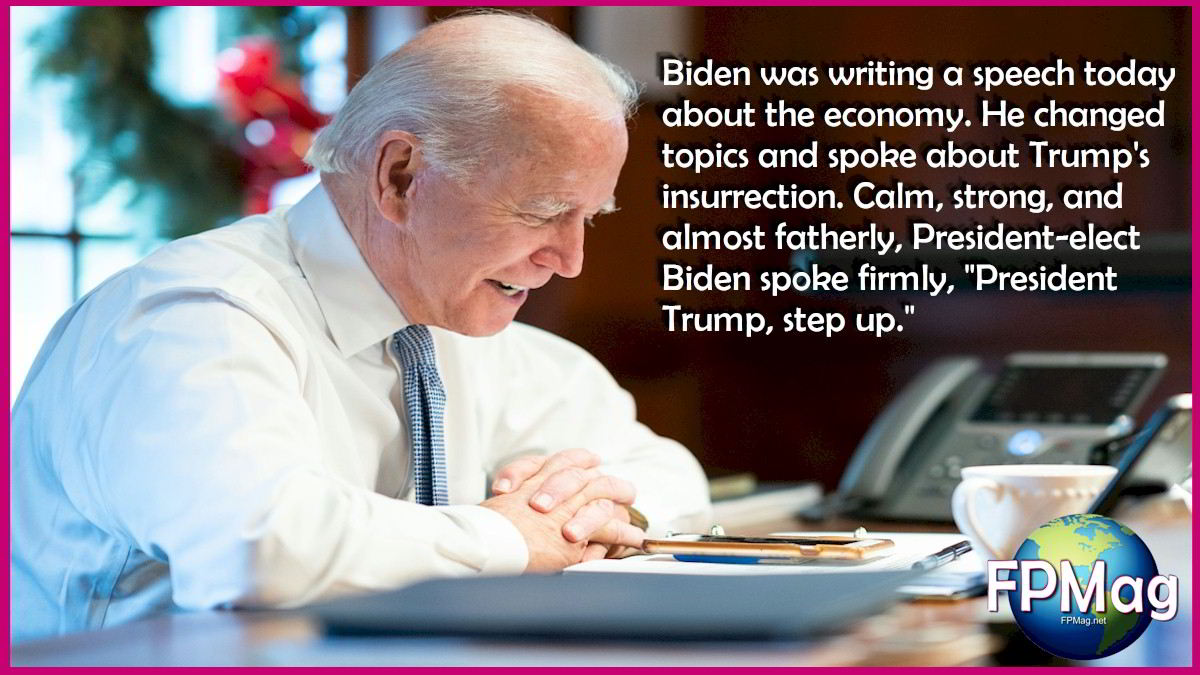 Following Biden’s speech shortly after 4:00 PM local time, in which he demanded Trump speak out and call off his insurrection, Trump issued a recorded video statement of mixed messages saying that his re-election was stolen from him and that people should go home.

Tens of thousands of protestors had been in Washington DC for a few days, flaunting their disobedience of social distancing and mask rules. This is happening as America has had its worst days of COVID-19 deaths and nearing half a million excess deaths likely caused by the SARS-CoV-2 virus.

Helen Brisbois, an FPMag contributor from Washington DC, whose fiance is a police officer inside the Capitol building,  reports that she has been told that “heavy numbers of State Troopers from Maryland and Virginia as well as FBI forces plus Montgomery County (Maryland) police were on their way,” at press time.

Brisbois also reports that the State of Georgia elected two Democrat Senators, thus creating a 50/50 Democrat/Republican Senate with Vice President Kamal Harris as the decision vote as official President of the Senate. 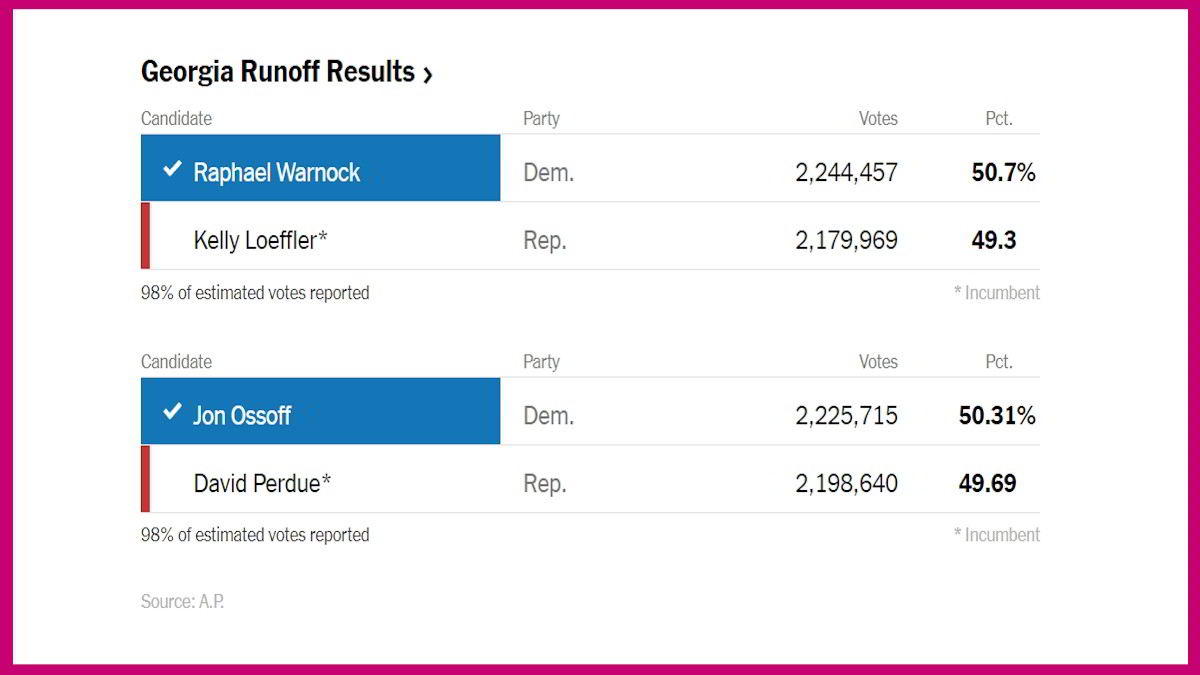 Georgia appears to be sending two Democrat Senators to the Senate, to round out a land slide victory for Kamala Harris and Joe Biden.

Ilhan Omar (@IlhanMN) has tweeted a statement saying she is  drawing up Articles for immediate impeachment of Donald Trump.

“I am drawing up Articles of Impeachment.

“Donald J. Trump should be impeached by the House of Representatives & removed from office by the United States Senate. We can’t allow him to remain in office, it’s a matter of preserving our Republic and we need to fulfill our oath.”