Psychopathy of Donald Trump is an extinction lever. Editorial

An eerie foreboding was the doomsday clock ticking 100 seconds to midnight, “closer to apocalypse than ever” as the pandemic began, on 24 January 2020.

Add to this, everything that US President Donald Trump did in 2020 that exacerbated the COVID-19 pandemic in America.

Tens of thousands of US Military persons and US business and tourist travelers around the world are sharing the American version of COVID-19 everywhere they go.

Today the USA hit 500,000 excess deaths, likely caused by COVID-19. The official political count from the Trump Administration given to at least one university is 383,000. Meanwhile the USA has more than one third of the entire world’s active cases, over 9 million.

Moments ago, FPMag was told that the Senate leader of the Republican Party is enthusiastic about a second impeachment of Donald Trump on Wednesday with a ban on his ever participating in federal politics. “This will help rid the Republican Party of Trump,” he reportedly said.

Psychopathic Donald Trump is the US President for another week and the law enforcement agencies have reported that thousands of armed vigilantes led by Trump will surround the US Capitol and attack and kill President-elect Biden and Vice President-elect Kamala Harris as well as House leader Nancy Pelosi.

Trump has caused the death, rape, and molestation of migrant children; mass murdered children in Yemen; and recently killed fellow Americans at the Capitol Building on 6 January.

Trump has planned several armed coups against elected governments in America and according to intelligence sources has more such activities planned.

One considerable problem is that the FBI, the CIA, National Guard, US Military and all police forces in the United States are, based on statements online; open source video and images; plus the investigations by the FBI and Washington DC Capitol police, heavily salted with Trump militia members or in the alternative, Trump coup supporters.

Trump lost the election on 3 November by the ratio that he knew of, Joe Biden leading him in the polls by at least ten percent. Biden beat Trump by a relative landslide. It was not a close election.

“Interesting that Trump is using the same techniques that ISIS was using. Secure communication messenger services like Telegram channels and others about which it would be better not to talk about, are all filled with chatter about coming civil war to ‘rescue the Trump Presidency,'” says Beverley who works with Simon Baldock’s global security agency in Israel and responded to queries while Simon was not available for comment. The security specialist pointed out that this seditious chatter involving Trump and an armed insurrection is being watched from all around the world.

“The language itself is unlawful of itself, if the illegality of issuance of death threats and kill orders over telephone lines is translated to digital communications,” she added.

Trump and his cryptic language to the media are being interpreted as a ‘dog whistle’ to “Kill Biden” in online narratives among a huge class of uneducated, below-average intelligence, heavily armed, grade-school or high-school dropouts. They come from the same lineage as Timothy McVeigh, the “American militant who carried out the Oklahoma City bombing on April 19, 1995. The explosion, which killed 168 people, was the deadliest terrorist incident on U.S. soil, until the September 11 attacks in 2001,” says Britannica encyclopedia.

Us law enforcement members who do not want to be identified for fear of recrimination from peers who support Trump’s coup attempts, say they have heard of chatter suggesting the use of bombs bigger than that which McVeigh used to kill 169 people in Oklahoma in the period of 17 January through 20 January.

The revolution seems to be aimed at reseating Donald Trump as a dictator which he himself has hinted at repeatedly using different words.

Incipient fear that COVID-19 could become an extinction-event or near-extinction catastrophe has scientists now worried.

The SARS-CoV-2 virus is learning how to disguise itself. That destroys the effectiveness of vaccines. An E484K mutation has changed the shape of Covid-19’s spike protein in  a  South African variant.

Regardless, Trumpers on the currently-down Parler, said last week, “We don’t wear masks and don’t give a F what the lefties think”.

If that identifies insurrection conspirators, US law enforcement has a formidable job on its hands tracking and arresting conspirators and actual home-grown terrorists; also the privatized jails and prisons stand to make a fortune but had better start planning for a surge of inmates and COVID-19 infections; and the entire elected bevy of Republican seditionists may face arrest or sanctions.

Trump Weaponized COVID-19 Against the US Establishment

Meanwhile, Trump, besides inciting insurrection, has taught his cult following to kill Americans with COVID-19.

Trump cultists refuse mask wearing and deliberately congregate in close gatherings, aggressively intimidating law enforcement and the public, spreading the COVID-19 disease furiously. Trump himself has spread the disease to dozens of people.

Unfortunately, Trump and his Republicans’ deliberate spread of the COVID-19 disease has impacted the entire globe. 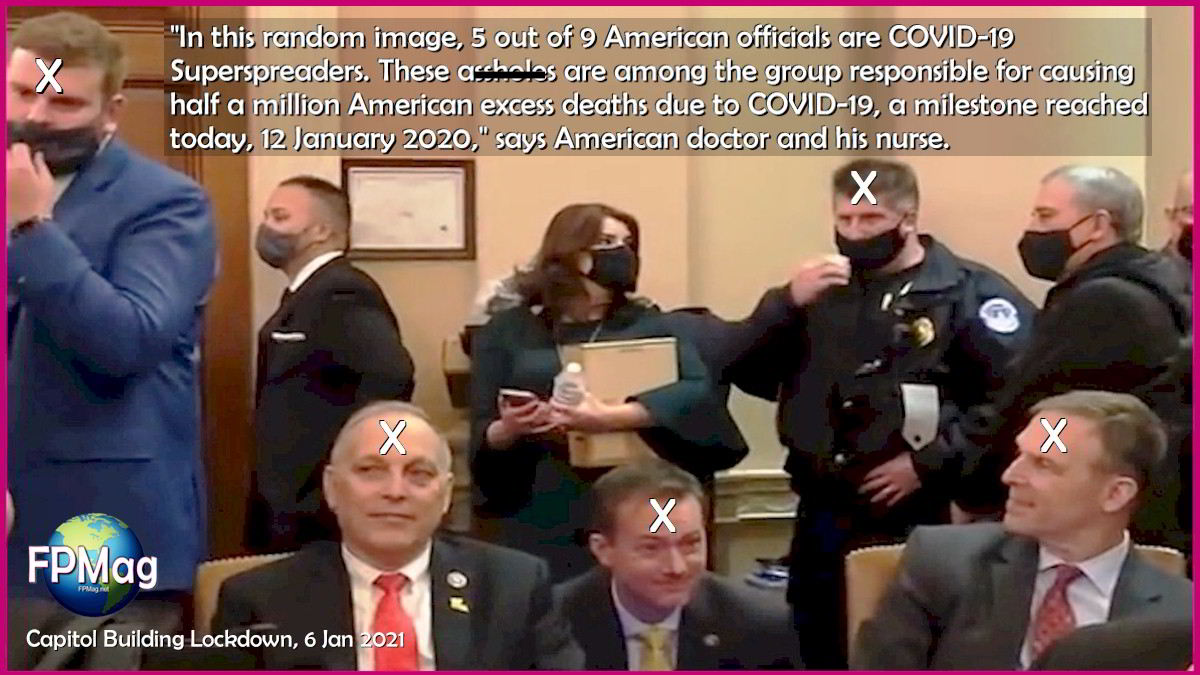 In this random image, 5 out of 9 American officials are COVID-19 super spreaders. In less than a week, three members have tested positive for the disease and many others are now getting tested. “These -ss-oles are among the group responsible for causing half a million American excess deaths due to COVID-19, a milestone reached today, 12 January 2020,” says an “angry and fed-up” American doctor and his nurse in San Francisco, California. Three refused to wear a mask when asked to do so. Two are fiddling with bare fingers the outside front of their masks, one of which wears a useless piece of cloth UNDER HIS NOSE. The nose is the main area where infection begins, say epidemiologists. These actions are extremely dangerous in a closed room with hundreds of people during a raging infectious disease outbreak. Some of the people in this picture are infected now. Others around them are also infected. Statistically, over 60% of Americans have been infected by the SARS-CoV-2 virus and many are now becoming reinfected, a course of sickliness that has bad outcomes, say many peer-reviewed published experts. Photo Credit: Screen grab from Video shown below.  Art/Cropping/Enhancement: Rosa Yamamoto FPMag

American patients who have recovered from COVID-19 are reporting serious long-term ramifications of illness in their core organs. That includes, the heart, kidneys, liver, pancreas, stomach, intestines, brain, and all blood vessels.

This comprises an underlying comorbid illness to the second and third infection of COVID-19. There has not been enough time to confirm this phenomenon because many first infections yield an immunity factor that may last 6 months to a year, however, numerous scientists have been studying the reinfection phenomenon while they wonder if the pandemic may become an extinction event as one new strain seems to be able to cloak itself sufficiently as to deny identity to vaccinated humans’ immune systems.

This set of possible pandemic outcomes suggests that Americans may have a proclivity toward suicidal behaviour that could have a deleterious impact on the entire human race.

America has become so bizarre and dangerous, even its neighbour to the north, among the politest, most humanitarian nations on Earth, has closed its border to America. 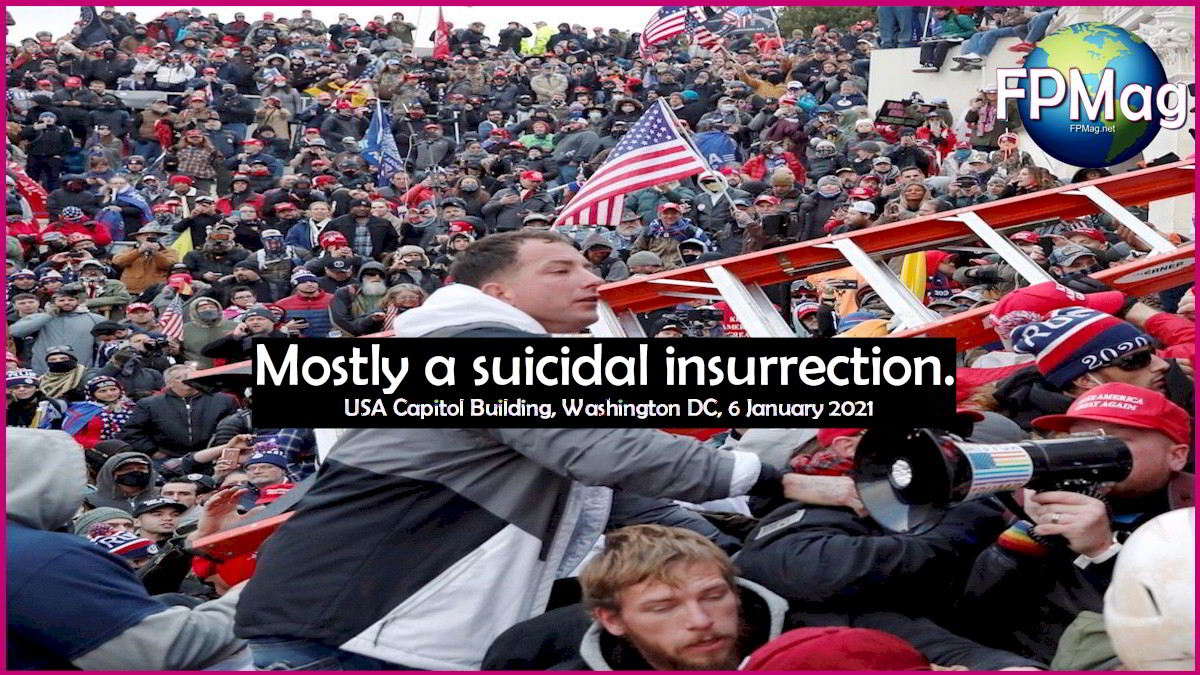 Over four thousand persons, mostly unmasked insurrection rioters, stormed the Washington DC Capitol Building on 6 January and started the spread of a highly contagious evolved variant of an extremely infectious disease that has now killed half a million Americans according to excess death estimates due to COVID-19.

On 7 January, Eric Toner MD, a Senior Scientist in the Department of Environmental Health and Engineering at the Johns Hopkins Bloomberg School of Public Health, is quoted by The Washington Post saying the Trump-led 6 January Capitol Building Insurrection  was a textbook example of a COVID-19 super spreader occasion.

Looking back, it is clear his sage prediction to the Post is  becoming a reality.

“This was in so many ways an extraordinarily dangerous event yesterday,” he said on 7 January, “not only from the security aspects but from the public health aspects, and there will be a fair amount of disease that comes from it,” Toner told the Post.

In this 6 January video, elected US Representatives and Senators have hunkered down, filling a large room breathing infected air in close proximity to each other. The arrogance of the Trump coup supporters make it clear that they do not respect the lives of the people they are calling ‘lefties’ or ‘Democrats’, etc.

Reportedly, Donald Trump has Proud Boys, Patriot Prayer, Oath Keepers, Ku Klux Klan, the Uncreated Light, Wolverine Watchmen, and many extremists pumped up with the potential of a promise from Trump of their ‘taking over the ruling class and becoming the ruling class.’ Officials in Germany, NATO, Canada, Australia and other nations have rebuked the Trump coup attempts.