From a government that has publicly issued more than 20,000 lies according to the Washington Post, comes the extremist rabble-rousing statement that Pompeo can prove China weaponized a coronavirus and released it on the world from Wuhan.

Europe shuns Pompeo so SoS starts China-Mil-SARS2 rumour for attention getter as a distraction from the Trump Civil War.

Pompeo was shunned by European officials and forced to cancel a trip to Europe this week including Brussels and Luxembourg because the NATO member Luxembourg said they would not see him following the Trump coup attempt on 6 January.

Luxembourg external affairs minister, Jean Asselborn described US President Donald Trump as a “political pyromaniac who must be brought before a court” on public radio and said he was a “criminal”. This refers to the Trump-led insurrection and the five hour fall of the US elected government on 6 January 2021.

“Trump is a criminal, a political pyromaniac who should be sent to criminal court. He’s a person who was elected democratically but who isn’t interested in democracy in the slightest,” Asselborn said in an interview with RTL Radio. “The 6th of January 2021 was a 9/11 attack on democracy itself, and Trump was the one who egged it on,” said Asselborn.

“The people who are truly responsible are Trump and members of the GOP. People like Ted Cruz and other elected Republicans are responsible because they acted like Trump’s poodles,” Asselborn added.

“But stirring up Trump’s pro-nazi-militias to commit more acts of racism and violence is all that  Trump and the right-wing extremist  Pompeo will achieve [with the allegations against China],” say British embassy officials in Ottawa who claim they were told first about this latest scandal claims by the British DailyMail (“British Foreign Office and security sources confirmed they were expecting the claims from Washington but dismissed them in advance, saying ‘all the credible scientific evidence does not point to a leak from the laboratory’.”) 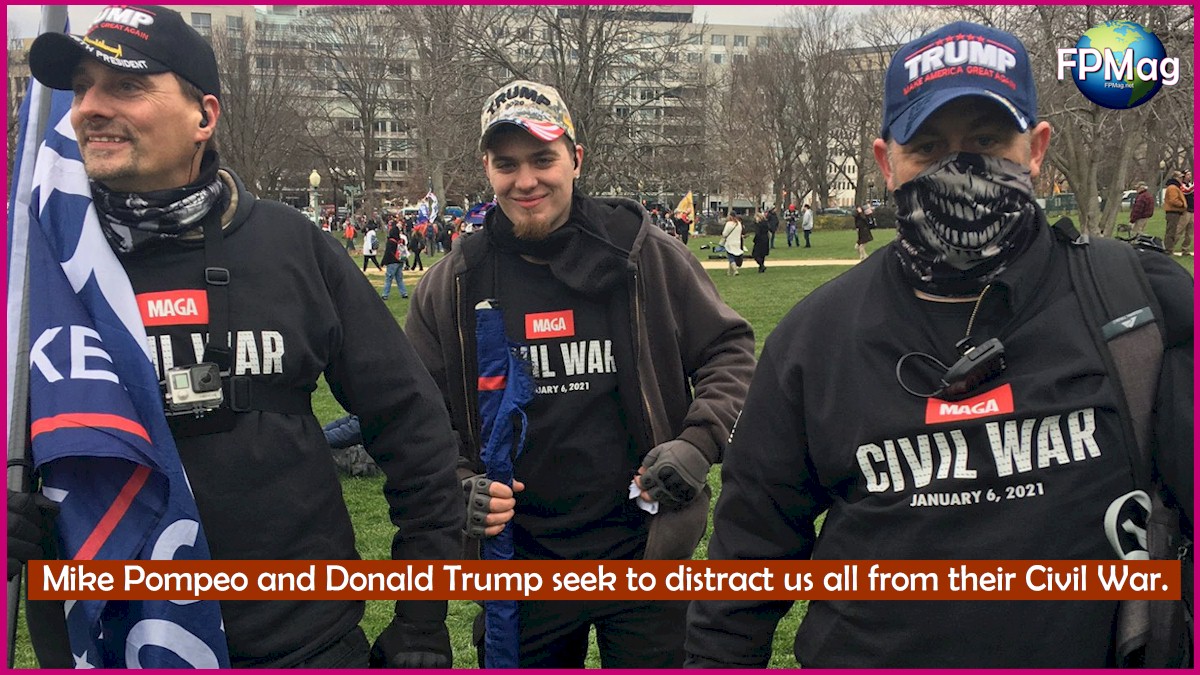 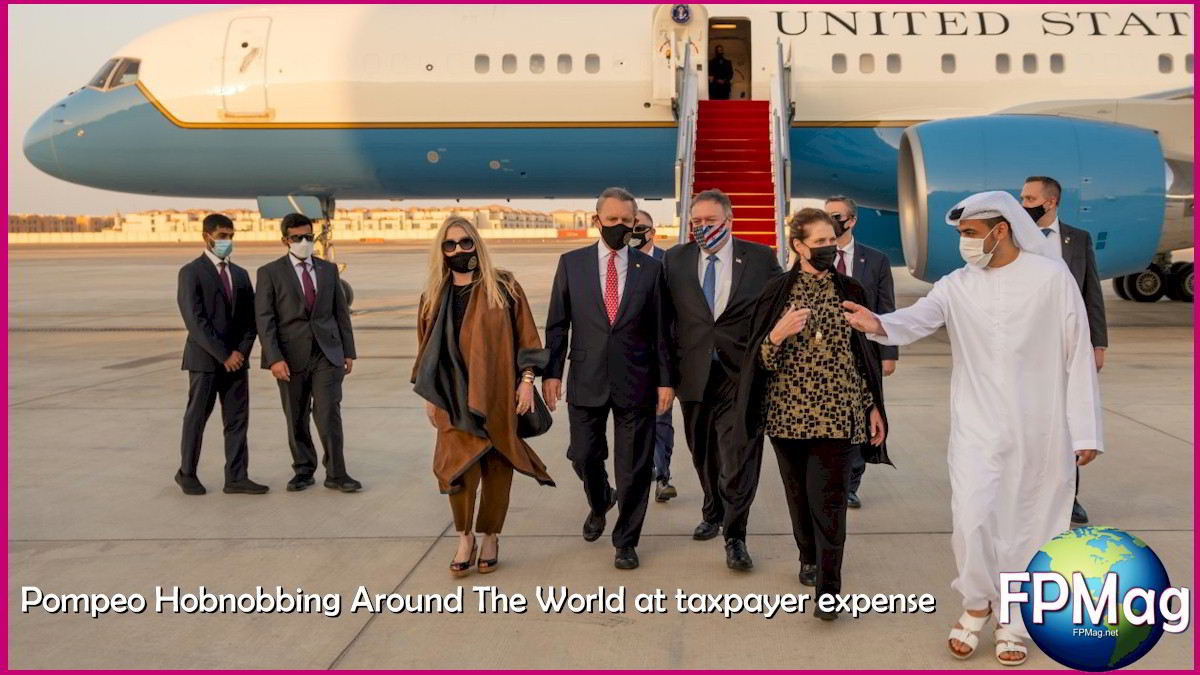 Pompeo Hobnobbing Around The World at taxpayer expense was shunned by European leaders and told to stay home. Photo Credit: US State Department

“If it wasn’t enough to learn that the Trump administration was contemplating a plan to have Americans ingest disinfectant to rid the nation of SARS-CoV-2,” commented RINJ Foundation‘s American coordinator, Monique Deslauriers, “Now we find out that Pompeo and Trump want to start a war against China to deflect from Trump’s mental illness, impeachment, and the Civil War he started. Pompeo and Trump must be imprisoned in my humble opinion. But I hear even the polite Europeans saying the same things. We Americans have had enough of Trump’s chaos,” she added.

“China ignores the cacophony and continues to fight the coronavirus. Notice the difference that mask-wearing has made for China versus the Republican Senators who refused masks and infected the bunkered elected representatives on 6 January [2021] as GOP militias staged a coup at the capitol building,” says Deslauriers. “America is the worst in the world and China is among the best solidarity fighters of COVID, and it’s about behaviours,” she added. 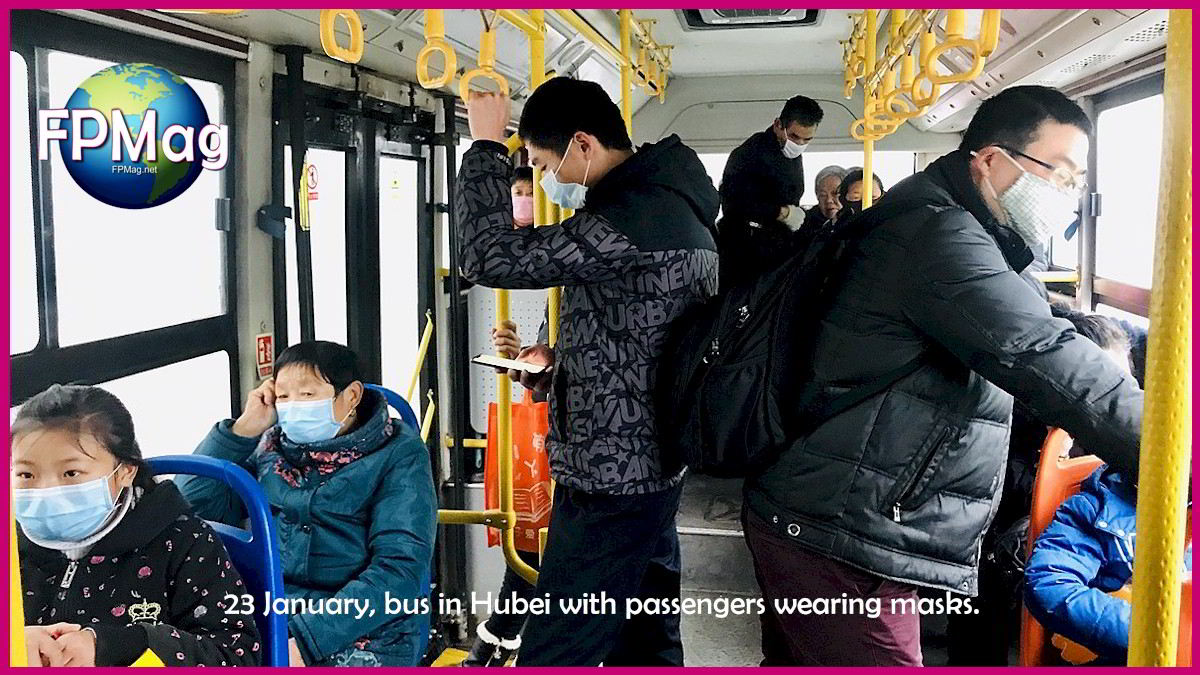 On 20 January 2020, the World Health Organization which Pompeo insists was instrumental in a global “cover-up” of a “China-weaponized” SARS-CoV-2, issued a situation report.

The highly respected Lancet medical journal sought to put to rest the allegations of a deliberate or accidental release of a weaponized coronavirus.

“We are public health scientists who have closely followed the emergence of 2019 novel coronavirus disease (COVID-19) and are deeply concerned about its impact on global health and wellbeing. We have watched as the scientists, public health professionals, and medical professionals of China, in particular, have worked diligently and effectively to rapidly identify the pathogen behind this outbreak, put in place significant measures to reduce its impact, and share their results transparently with the global health community. This effort has been remarkable.

“We sign this statement in solidarity with all scientists and health professionals in China who continue to save lives and protect global health during the challenge of the COVID-19 outbreak. We are all in this together, with our Chinese counterparts in the forefront, against this new viral threat. Citing The Lancet-“Statement in support of the scientists, public health professionals, and medical professionals of China combatting COVID-19″ 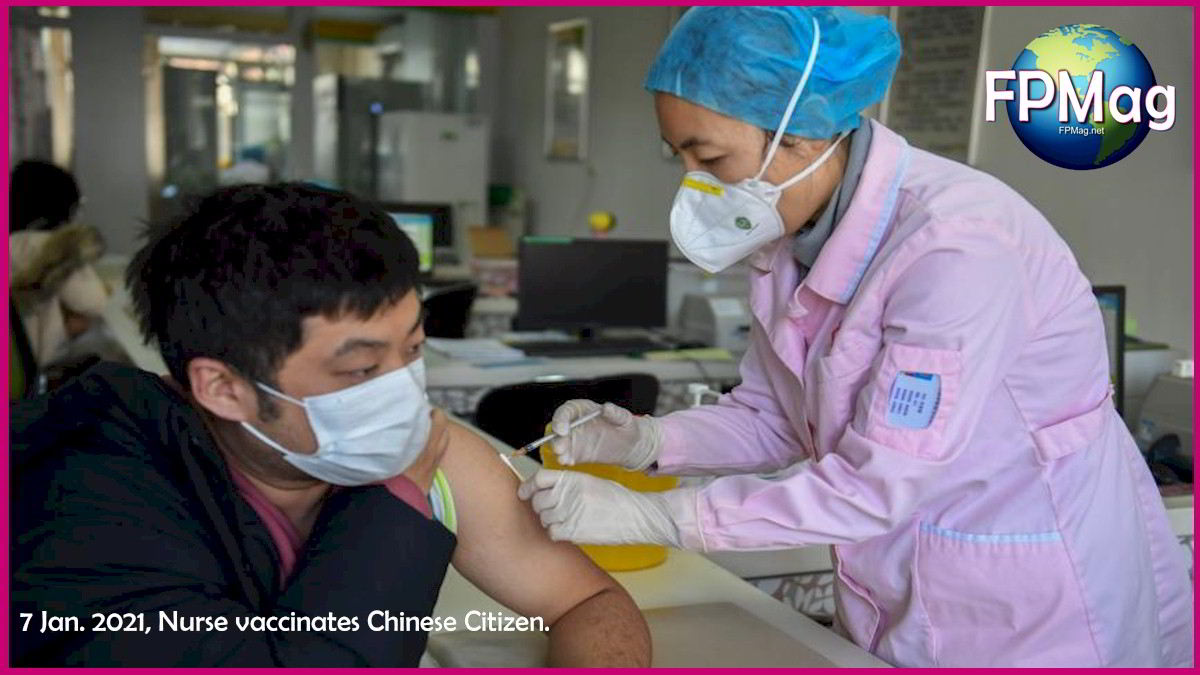 I asked these guys if civil war was what they wanted. “Yes” they replied pic.twitter.com/BLopvJP6Ik

What Luxembourg lacks in population size, it makes up for in foreign ministers who have absolutely had it with the President of the US:

Why Pompeo cancelled his last Europe trip: Luxembourg’s foreign minister Jean Asselborn and EU leaders, embarrassed after the assault on the Capitol last week, refused to meet him https://t.co/MSW0tlnvVt

Watch: This is the Trump-led Civil War story Michael Pompeo seeks to distract from. The GOP/Trump militia is aided by GOP officials and workers in the planning and deliberation of a coup. This is only part of the puzzle.