Warning signs that mutated virus may get the best of us.

Despite energetic efforts to vaccinate populations, a trend pattern in many large countries, particularly in the USA which is the COVID-19 pandemic epicenter with 60% of the world’s active cases today, is alarming scientists and compelling warnings, “not to ease up on disease prevention measures”.

US COVID19 drop in cases all but stopped, levelled too high say scientists. Next few days may be the harbinger of what is to come.

“Things are tenuous,” says Dr. Rochelle Walensky, head of the US Centers for Disease Control and Prevention.

“The drop in cases has plateaued too high and that likely indicates mutated virus spread,” says biostatistician.

In Canada there is a pattern to indicate that lockdowns in high community transmission regions have worked explicitly. This has stymied the spread of more dangerous mutations of the SARS-CoV-2 virus. Easing up on these restrictions could impose a death sentence for many thousands of Canadians.

But in the United States, what has happened is “just plain scary” says biostatistician Fred Harris with the Civil Society Solidarity Against COVID-19 team.

The Civil Society Partners in Solidarity against COVID-19 team sent its data to the US CDC and the WHO after meeting with partners 8 hours ago to discuss the subtle but important changes in many countries. 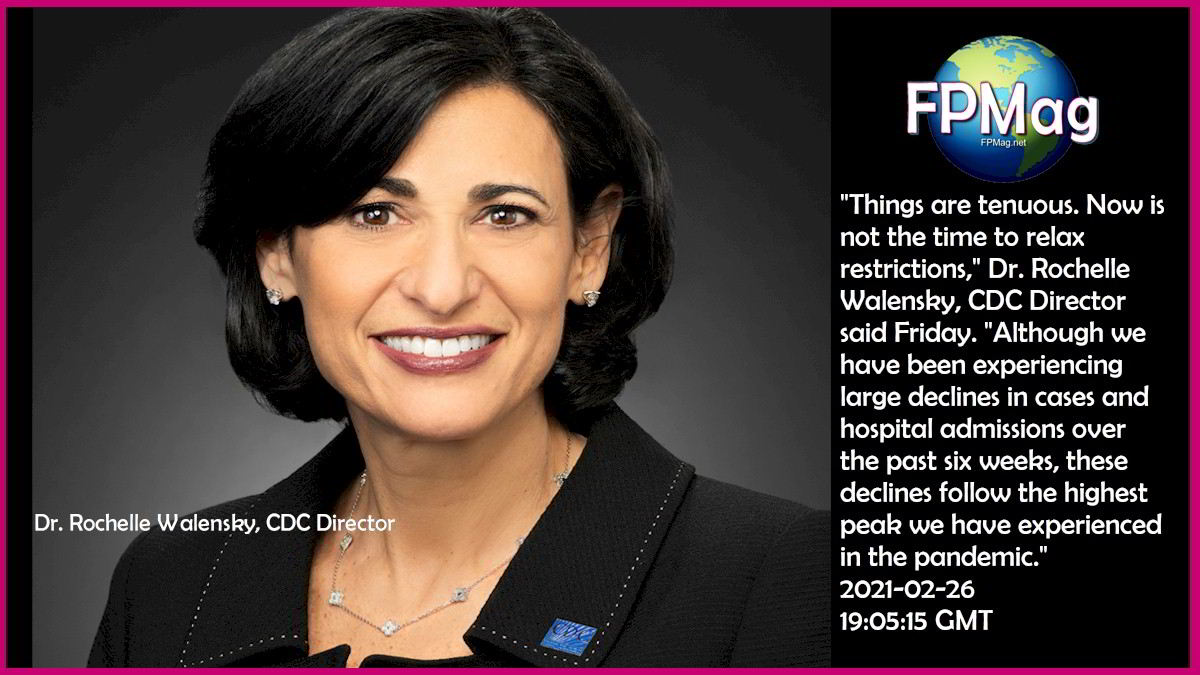 Dr. Rochelle Walensky, CDC Director
“Things are tenuous. Now is not the time to relax restrictions,” Dr. Rochelle Walensky, CDC Director said Friday. “Although we have been experiencing large declines in cases and hospital admissions over the past six weeks, these declines follow the highest peak we have experienced in the pandemic.”
2021-02-26
19:05:15 GMT
Photo Credit: US Centers for Disease Control and Prevention Art/Cropping/Enhancement: Rosa Yamamoto FPMag

“Malaysia (2,253 cases 24hrs), Philippines (2,647 cases 24hrs) and Indonesia (8,232 cases 24hrs), in the past 24 hours have shown alarming numbers of new cases despite mitigation efforts. Mainland Southeast Asia has almost none which may stem from the fact that the virus has been in that region since at least 2010, and people are likely immune,” says Harris.

“These three countries are in big trouble if our suspicions are correct.”

Illustrating the conflict between public health and economic considerations, in the past week the economic czars of the Philippines have been pushing for a nation-wide reduction of mitigation measures. When presented to Philippines President Rodrigo Duterte he emphatically said “No” and “wait for the rollout of vaccines”.

Pesident  Duterte’s spokesperson, Harry Roque, later said in a statement that Duterte “gives a higher premium to public health and safety” over economic factors. Filipino netizens, seemingly with a sense of the direness of the mutant VOCs,  promptly applauded the decision. 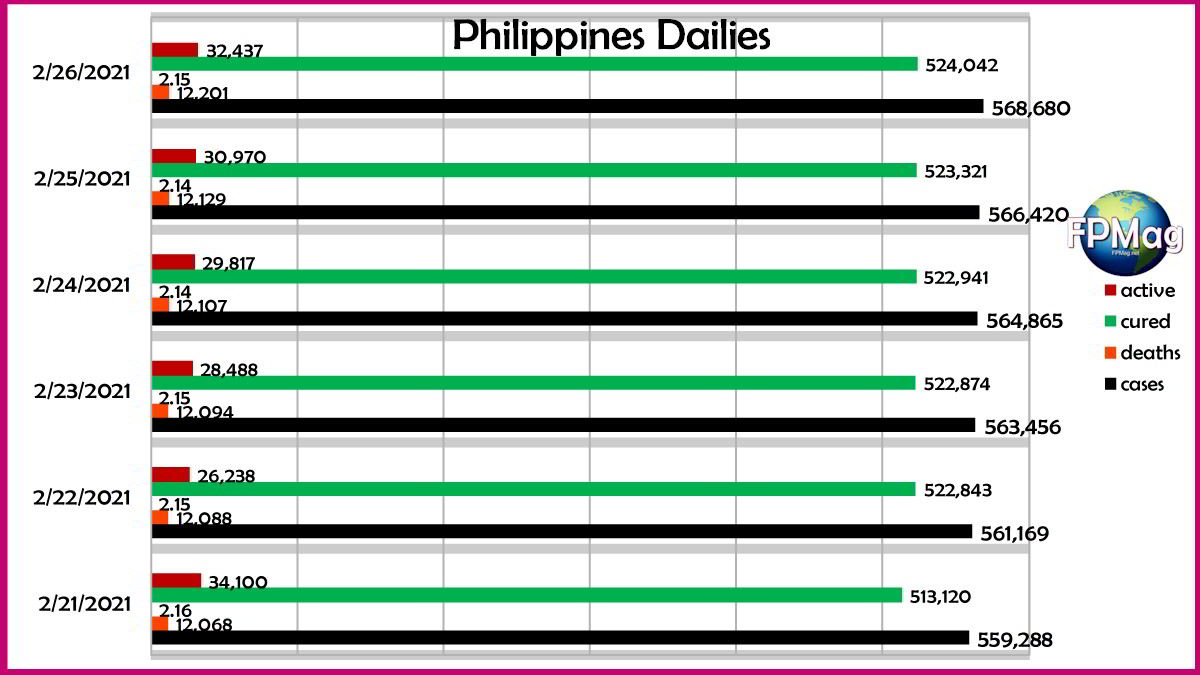 Philippines dailies to yesterday show steady growth in cases and a steady rise in Case Fatality rates.  Malaysia and Indonesia are worse. What the three have in common is that they are island (Archipelago) members of the Southeast Asian region and they each have been infected with all of the known VOCs (Variants of Concern) say biostatisticians tracking the world spread of COVID-19. Source Civil Society Partners in Solidarity against COVID-19

In Canada, the province with the most cases, Ontario, has issued an updated statement (Evidence on covid-19 pandemic 2021-02-25) in which it declares that “declines in cases, hospitalization and ICU occupancy are slowing… Variants of concern such as B.1.1.7 continue to spread across Ontario. Cases,  hospitalizations, and ICU admissions will likely soon increase.”

That warning was issued Thursday, and went on to say that some 40% of new cases seem to be a mutated, more dangerous strain of the virus. 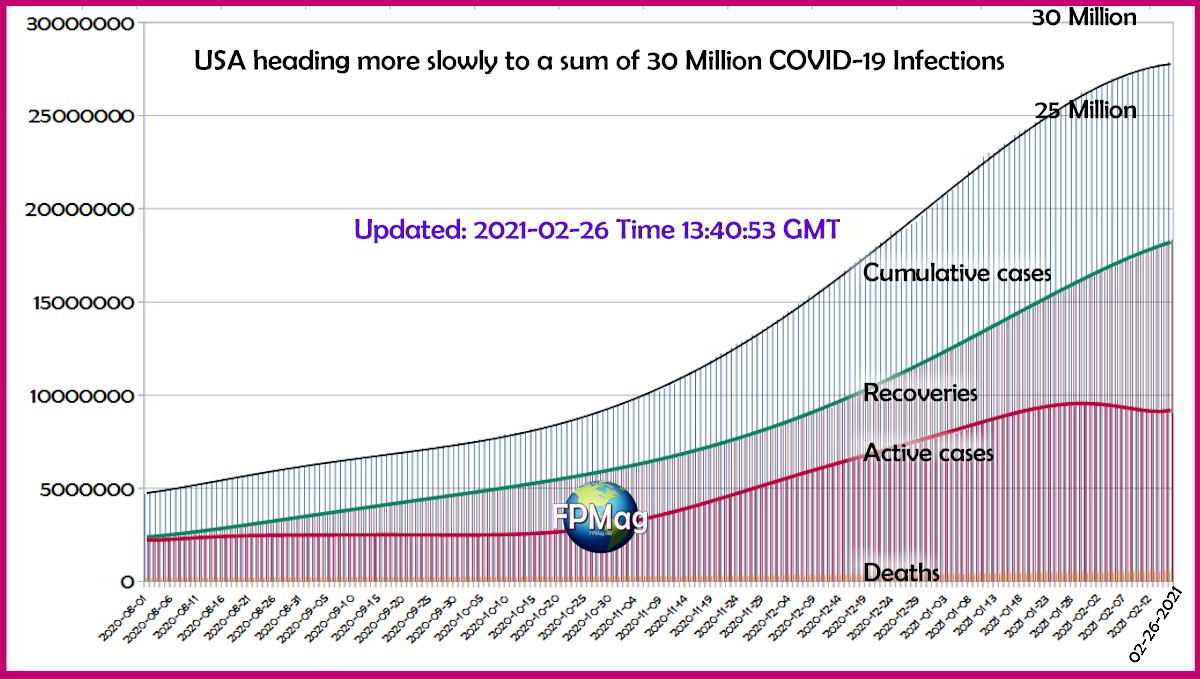 It is the red trend line of Active Cases that has scientists alarmed. It has leveled at a dangerously high mark. This is the more dangerous mutated virus, making its presence known, says biostatistician Fred Harris. Source Civil Society Partners in Solidarity against COVID-19

USA COVID-19 Dailies. US CFR has recently increased from 1.7 to 1.8%. Dr. Rochelle Walensky of teh CDC has raised an alarm about the plateauing of US cases far too high. Source Civil Society Partners in Solidarity against COVID-19

“The science community is now worried about many countries where the conflict between public health and a failing economy, hunger and pandemic-weariness is dire as the more virulent B.1.1.7 variant takes hold,” says Harris.

“We need to limit movement for three weeks because the new variants are more aggressive,” the Czech Republic’s Prime Minister Andrej Babis explained on Thursday night. “We can see a dramatic increase of patients in hospitals.”

Twenty minutes ago, Reuters published a similar report from the CDC Director, Dr. Rochelle Walensky, wherein she is warning Americans not to let their guard down and that the plateau where the descent in case numbers has levelled is dangerously high.

It is more important than ever to wear a well-fitting mask. Today’s @CDCMMWR finds the better a mask fits, the more protection you have for yourself & those around you. #WearAMask that fits closely over your nose & mouth for it to be more effective. https://t.co/2b1DS469OH https://t.co/pkuYz2caAN

Many scientists are now saying, consider wearing  an N-95/FFP-2/KN-95 Filtering Face Piece (FFP) Respirator or if not available double up to a tight fit with a procedure mask and a three-layer cloth mask.

It is contraindicated to wear anything over top of a FFP respirator but that is not the case with the spit-barrier surgical procedure mask.

Fit-test the respirator, or double-mask combination adjusting as needed  and wear it when going out, say doctors like those at Harvard University. Dr. Abraar Karan recently told CNN’s Dr. Sanjay Gupta that if everyone used an N95 face mask, it would stop the pandemic in four weeks.

Watch a free training video. This is a presentation of  University of Nebraska’s epidemiology experts.