America is a pandemic catastrophe area of epic deaths and getting disastrously worse next month. America’s SARS-CoV-2 outbreak was allowed to become uncontrollable in 2020 by the Donald Trump administration hence America is now no match for the more deadly variants of global concern.

While parts of Maryland open restaurants, Iowa, North Dakota, and Wisconsin are relaxing mask mandates and the most prolific SARS2 variant of concern (VOC) in the world is beginning to spread like wildfire in America.

The VOC may be as much as 70% more deadly. America’s CFR has already begun edging upward.

By Micheal John and Melissa Hemingway

In the past 48 hours, the VOC has begun to change the pandemic landscape for America according to data experts and scientists who have studied the B.1.1.7.

More than 80% of all Americans have likely been infected and are especially vulnerable to emerging more lethal variants of the virus which unlike the 2020 zoonotic that first infected humans coming from another mammal, the new variants have learned something about the human body having nbeen inside many, and morphed into something more infectious and probably more lethal, say scientists.

At the outset of the UK  VOC detection, according to the COVID-19 Genomics Consortium of the United Kingdom, “the rapid growth of the [B.1.1.7] lineage indicates the need for enhanced genomic and epidemiological surveillance worldwide and laboratory investigations of antigenicity and infectivity.”

That work continues but what has been revealed by initial research suggests the new virus variant is more deadly and more transmissible.

“As of January of 2021, the highly transmissible B.1.1.7 variant of SARS-CoV-2, which was first identified in the United Kingdom (U.K.), has gained a strong foothold across the world. Because of the sudden and rapid rise of B.1.1.7, we investigated the prevalence and growth dynamics of this variant in the United States (U.S.), tracking it back to its early emergence and onward local transmission.

“We found that the RT-qPCR testing anomaly of S gene target failure (SGTF), first observed in the U.K., was a reliable proxy for B.1.1.7 detection. We sequenced 212 B.1.1.7 SARS-CoV-2 genomes collected from testing facilities in the U.S. from December 2020 to January 2021. We found that while the fraction of B.1.1.7 among SGTF samples varied by state, detection of the variant increased at a logistic rate similar to those observed elsewhere, with a doubling rate of a little over a week and an increased transmission rate of 35-45%.

“By performing time-aware Bayesian phylodynamic analyses, we revealed several independent introductions of B.1.1.7 into the U.S. as early as late November 2020, with onward community transmission enabling the variant to spread to at least 30 states as of January 2021.

“Our study shows that the U.S. is on a similar trajectory as other countries where B.1.1.7 rapidly became the dominant SARS-CoV-2 variant, requiring immediate and decisive action to minimize COVID-19 morbidity and mortality.”

The Variant Of Concern (VOC) in the United States, the B.1.1.7 appears to have substantially increased transmissibility compared to other variants and has grown quickly to become the dominant variant in much of the United Kingdom according to a scientific report released in London on 11 February 2021 and updated a few hours ago.

The more the virus infects, the more it will continue to infect and morph—and the stronger it seems to become.

Dr. Atul Gawande, professor of surgery at Harvard Medical School and Cynthia and John F. Fish Distinguished Chair in Surgery, Brigham and Women’s Hospital, said in a recent Health & Medicine Report of the Harvard Gazette that “recent actions in Iowa, North Dakota, and Wisconsin to relax mask mandates are coming too soon despite cases declining nationally to just 91,000 a day last week from an early January peak of more than 300,000 new cases per day.”

In a recent FPMag article, experts were warning of the  danger in Maryland opening restaurants

Meanwhile the CDC as well as numerous experts including Harvard University professors in addition to every single epidemiology expert in the world FPMag has interviewed, is urging people to wear an Filtering Face Piece (FFP) respirator or double up the spit barrier surgical masks by putting a cloth face piece on top of the procedure mask.

Why not Wear a Filtering Facepiece Respirator like the Germans wear?

“There is evidence that under certain conditions, people with COVID-19 seem to have infected others who were more than 6 feet away. This is called airborne transmission. These transmissions occurred within enclosed spaces that had inadequate ventilation. Available data indicate that it is much more common for the virus that causes COVID-19 to spread through close contact with a person who has COVID-19 than through airborne transmission,” says the CDC.

“The Trump government and all of its medical advisors exhibited criminal behaviour by not telling the American public to wear N95 masks from the start; by not using the defense production act to force the manufacture of PPE; by lying to the public saying “the virus will go away”; by telling people not to wear masks; by personally buying up production schedules of hundreds of millions of respirator masks using hedge funds to make personal profits in this way and in other ways of exploiting COVID-19 for money; I am so angry…” says Cynthia, a nurse working in a Boston hospital who does not want to be precisely identified because she is not authorized to speak for Massachusetts health care departments.

A doctor nurse Cynthia referred to in Baltimore was too busy to speak long but she did say sarcastically, “Donald Trump and his herd-immunity fools exhibited criminal behaviour not telling Americans to wear N95 masks. Now we die in herds,” and nurse Cynthia agreed.

Nurse Cynthia said her doctor friend in Baltimore explained to her that all of the medical teams in her Baltimore hospital feel the same way, and many are ‘ready to walk” they are so exasperated.

But it would indeed have been better to end this pandemic once and for all by training the public to wear proper personal protection equipment instead of playing “politics”, says Monique Deslauriers, one of the supervisory  Nurses Without Borders in the USA.

It is contraindicated to wear anything over top of a FFP respirator but that is not the case with the spit-barrier surgical procedure mask.

Fit-test the respirator, adjusting as needed  and wear it when going out, say doctors like those at Harvard University.

Harvard Medical School practitioner Dr. Abraar Karan recently told CNN’s Dr. Sanjay Gupta that if everyone used an N95 face mask, it would stop the pandemic in four weeks. Watch the video below.

“N95 masks are considered the gold standard in personal protective equipment because they block 95% of large and small particles utilizing a unique electrostatic filter,” said Dr. Sanjay Gupta, a neurological surgeon and special consultant to the CNN news network.

Whatever happened to America?
Arguably Trump’s ‘herd immunity plan’ was the stupidest most Epic Fail in world History.

“Trump Went for Herd Immunity on the advise of junk science advocates, and all the other sycophants and crazies followed including Anthony Faucci. Hence America is a COVID-19 Disaster Area,” says American nurse.

Below: Americans in charge, people who are responsible for their causing over half a million American excess deaths in 2020. 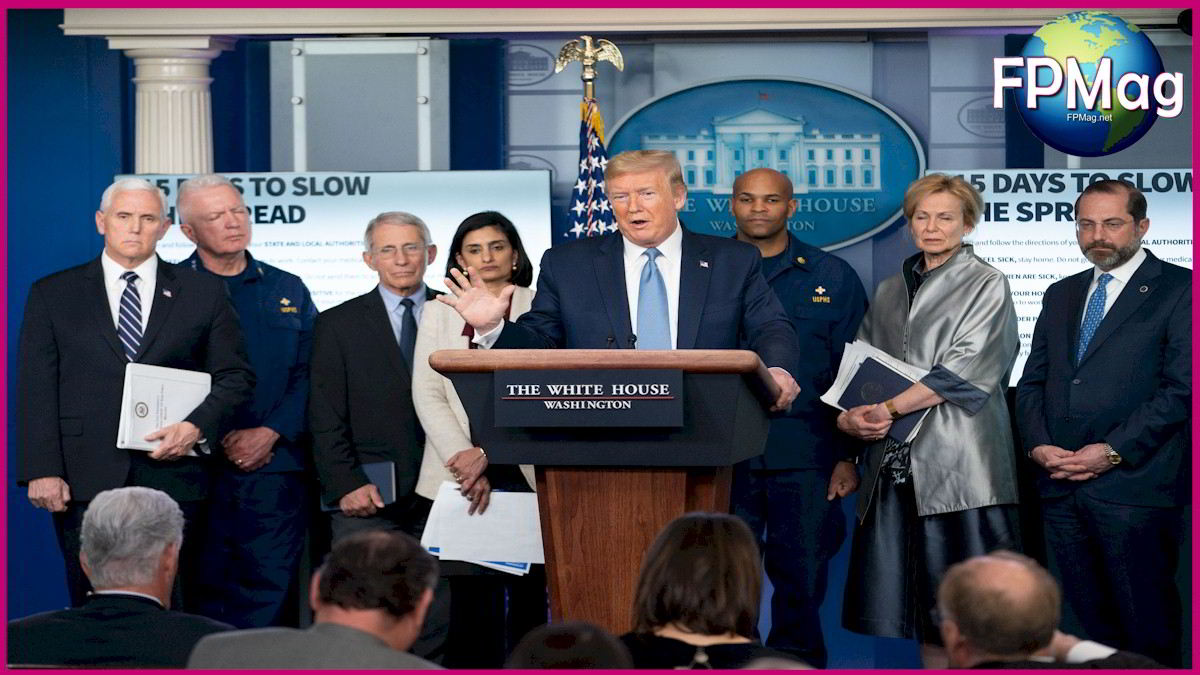 America is the Epicenter of the COVID-19 Epidemic with over 0.64 million excess deaths and half a million reported deaths. 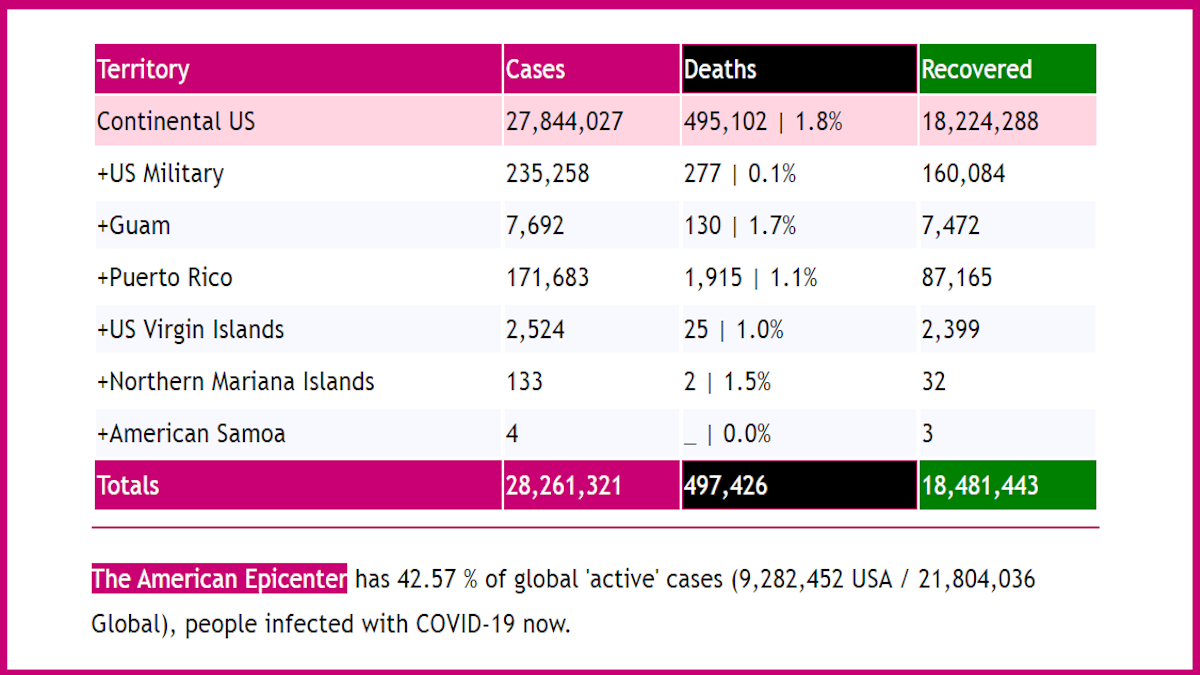 In 2020, the Administration of Donald Trump favoured letting the SARS-CoV-2 virus taking its course and allowing herd immunity to be achieved by natural immunity post infection.

Then- health and human sciences adviser to Donald Trump, Paul Alexander was the original author of the herd immunity plan according to documents released to a US Congressional inquiry.

“There is no other way—we need to establish herd [immunity], and it only comes about allowing the non-high risk groups expose themselves to the virus. PERIOD,” Alexander wrote on July 4 to the Health and Human Services assistant secretary for public affairs, Michael Caputo, and six other senior officials.

“…best if we open up and flood the zone and let the kids and young folk get infected” Alexander wrote on 24 July 2020 to Food and Drug Administration Commissioner Stephen Hahn, Caputo and eight other senior officials.

Trump got almost every American infected. 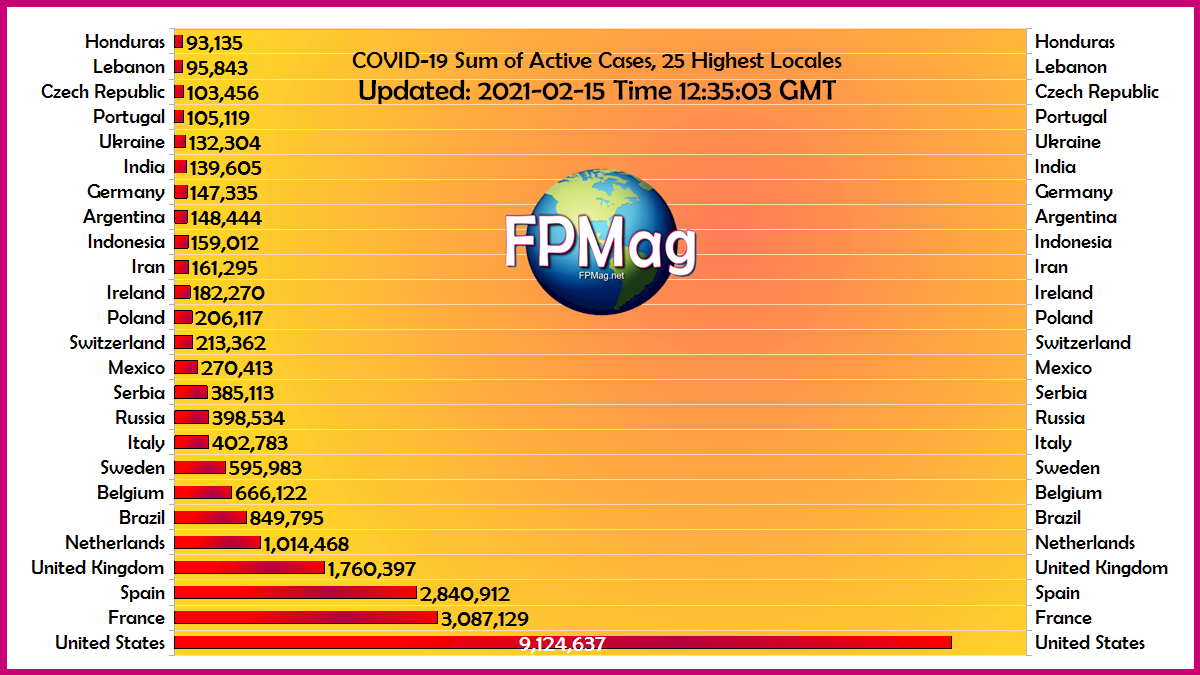