Trump acted against oath of office, vote to impeach him say women

“Shut Down the dangerous Political Career of Donald Trump,” is what these women are asking US Senators to do today. 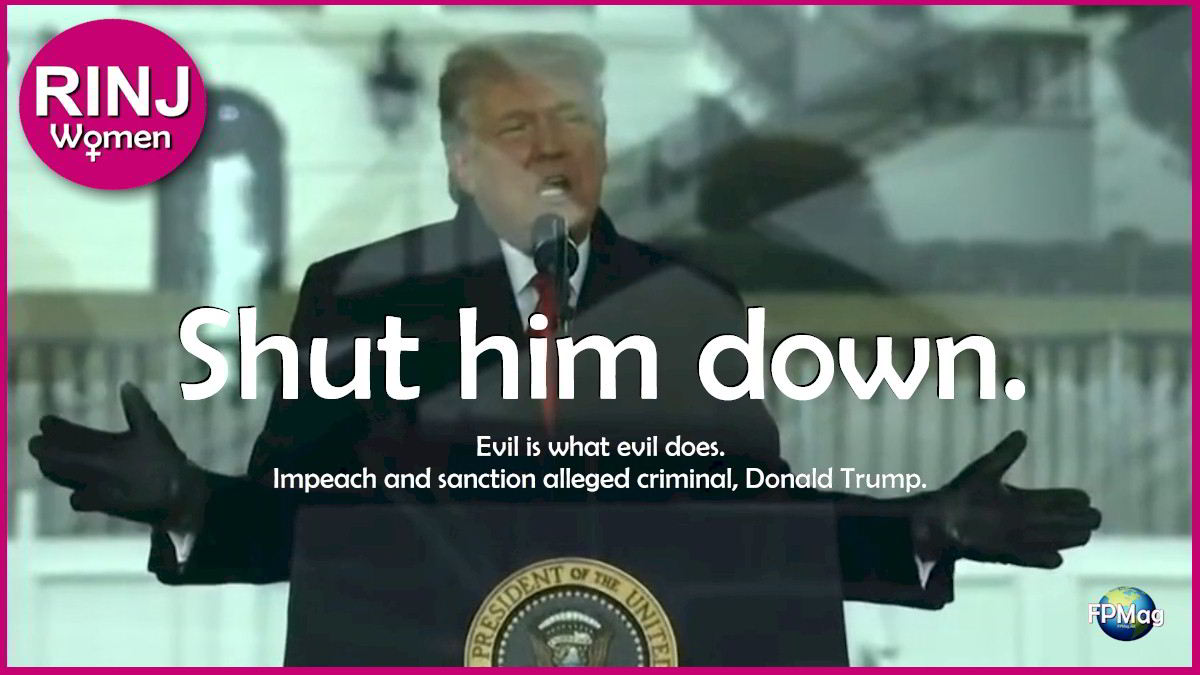 Shut him down. Impeach Donald Trump. Shut Down the dangerous Political Career of Donald Trump, a dangerous misogynist with blood on his hands, is what these American Women are asking of US Senators on 13 February 2021. Photo Credit: File Photo (Video Capture from live feed, 6 January 2021). Art/Cropping: Rosa Yamamoto FPMag

The voices of experienced lawmaker-women like Amy Klobuchar, Elizabeth Warren, Jaime Herrera Beutler, Kamala Harris, Kirsten Gillibrand, Liz Cheney, Tammy Duckworth, and many others of the American people’s representatives have been heard. Senate voting to convict Trump, should be happening later Saturday.

Reportedly, the massive number of arrests for the crimes of 6 January and shocking statements of rioters who have been charged, shook many more Republican Senators who now contemplate convicting Trump, say numerous media reports and people familiar with the matter who were not authorized to comment and requested anonymity.

Closed circuit Senate video shows Trump sycophants did crossword puzzles or doodled, instead of watching compelling video evidence presented by impeachment managers. Some of these persons appear to be ones implicated in some complicity with terrible injuries and a death among US Capitol Police according to sources who know the accused, based on what arrested rioters have reportedly told police.

The words of Congressman Ted Lieu on Thursday were instructive to those asking, “Why impeach again?”.

“Because impeachment, conviction and disqualification is not just about the past. It’s about the future.

“It’s making sure that no future official, no future president does the same exact thing,”  said  Congressman Ted Lieu during the second impeachment trial of Donald Trump. 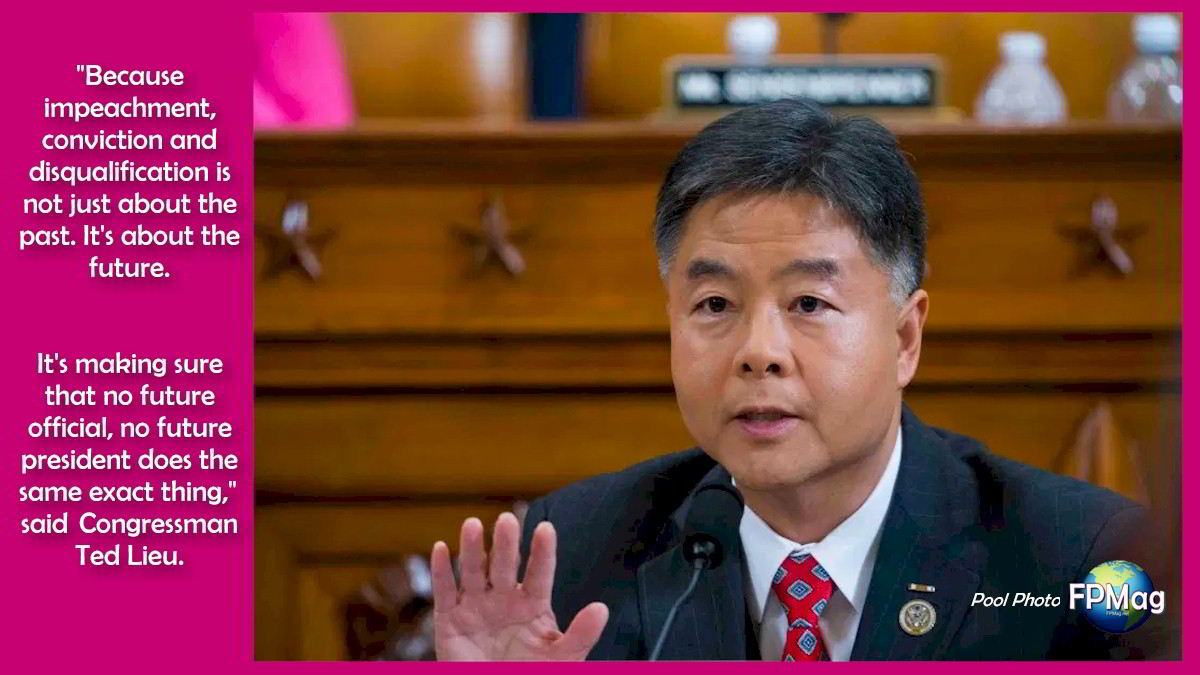 Because impeachment, conviction and disqualification is not just about the past. It’s about the future.
It’s making sure that no future official, no future president does the same exact thing,”  said  Congressman Ted Lieu. Photo Credit: Item is a File/Journalist Pool Photo (Doug Mills/The New York Times via AP, Pool)  Art/Cropping: Rosa Yamamoto FPMag

By admitting guilt and testifying as a witness for the prosecutors against associates, accomplices and ringleaders, persons formally accused of a crime can ‘turn State’s Evidence’  (slang) and be rewarded with sentencing leniency or their charges lowered  to lessor charges, even misdemeanors. Sometimes charges are even dropped for perpetrators whose evidence helps solve major crimes, say law enforcement consultants.

The FBI (United States) has hundreds of accused persons in its sights for criminal prosecution. Some of the accused are pleading guilty and giving statements to say that Donald Trump directed them to act in an aggressive manner and stop the transfer of government on 6 January 2021.

Sources to FPMag who are women friends of the accused, women who did not agree with or participate in the wrongful activities of 6 January 2021, and who do not want to be identified, say they heard that members of Donald Trump’s family were consulting by encrypted messaging apps with persons actually inside the Capitol Building and helping direct the events, perhaps particularly related to the US Vice President who was  was escorted by Secret Service at 14:13 hrs. localtime from a Chambers anteroom as senators were being  evacuated up until 14:30 hrs. localtime .

That Donald Trump’s sons were speaking to rioters in the Capitol on that 6 of January 2021 has not been confirmed by other means however several persons close to the accused persons have given the same statement which they say to reporters they also gave to law enforcement officials.

On 6 January 2021, the Trump sons participated in rallies, supporting the former President Trump’s rallying cries of “stop the steal” and “election fraud”, one saying “This isn’t their Republican Party anymore. This is Donald Trump’s Republican Party.”

In the words of Logan Jaffe, Lydia DePillis, Isaac Arnsdorf and J. David McSwane, of ProPublica:

“The invasion of the U.S. Capitol last Wednesday was stoked in plain sight. For weeks, the far-right supporters of President Donald Trump railed on social media that the election had been stolen. They openly discussed the idea of violent protest on the day Congress met to certify the result.”

“We came up with the idea to occupy just outside the CAPITOL on Jan 6th,” leaders of the Stop the Steal movement wrote on Dec. 23. They called their demonstration the “Wild Protest,” a name taken from a tweet by Trump that encouraged his supporters to take their grievances to the streets of Washington. “Will be wild,” the president tweeted on 19 december 2020.

Jaime Herrera Beutler has been outspoken on the wrongfulness and Presidential malfeasance of rallying a riot killing a police officer.

On Friday, Congresswoman Jaime Herrera Beutler (WA-03) released a statement regarding the Article of Impeachment slated to be voted on by the U.S. House of Representatives today saying, “I believe President Trump acted against his oath of office, so I will vote to impeach him.”

“The President of the United States incited a riot aiming to halt the peaceful transfer of power from one administration to the next… The violent mob bludgeoned to death a Capitol police officer as they defaced symbols of our freedom. These terrorists roamed the Capitol, hunting the Vice President and the Speaker of the House.”

“Hours went by before [Trump] did anything meaningful to stop the attack. Instead, he and his lawyer were busy making calls to senators who were still in lockdown, seeking their support to further delay the Electoral College certification. House Republican Leader Kevin McCarthy describes pleading with the President to go on television and call for an end to the mayhem, to no avail. The President attacked Vice President Mike Pence on Twitter while Pence was in a secure room having fled from the mob that had breached the Senate floor threatening to hang him. Finally, the President released a pathetic denouncement of the violence that also served as a wink and a nod to those who perpetrated it: ‘I love you’, he said to them, ‘you are special’. More hours of destruction and violence ensued before law enforcement officials were finally able to clear the Capitol.”