No SARS-CoV-2 vaccine gave Philippines kids Me Too Incest

The thug approach to fighting COVID-19 disease in the Philippines has not worked. Deaths, CFR and cases are all rising. So too is rape and “me-too incest”.

A year-long confinement of children to home in the Philippines has led to a silent child rape, incest and suicide crisis, according to reports to RapeIsNoJoke rape crisis call-centers run by titanium women who don’t talk about what their callers say.

Mothers are usually the last to know, one mom told FPMag.

“When they finally get the clue, their kid has grown a tummy full of baby,” she said, hence it is the moms now who make the calls looking for solutions. They end up on coat-hanger-alley. Abortions are illegal in the Philippines. So is divorce.

Yikes. Those rules mean the mom has to stay in the marriage and care for her 11-year-old’s baby and her  husband who is the father of her grand daughter. Ick.

The RapeIsNoJoke helpline is super strict about privacy so there will not be any anecdotal accounts in this article, nor is there any “trigger-warning content”. Talk to a RINJ helpline worker and they zipper their mouths and walk away looking like they would beat the crap out of you if you push it. Tough titanium ladies do that work. It must be hell.

This article will deal with the COVID-19 struggle. We are all, adults and children, in it together. 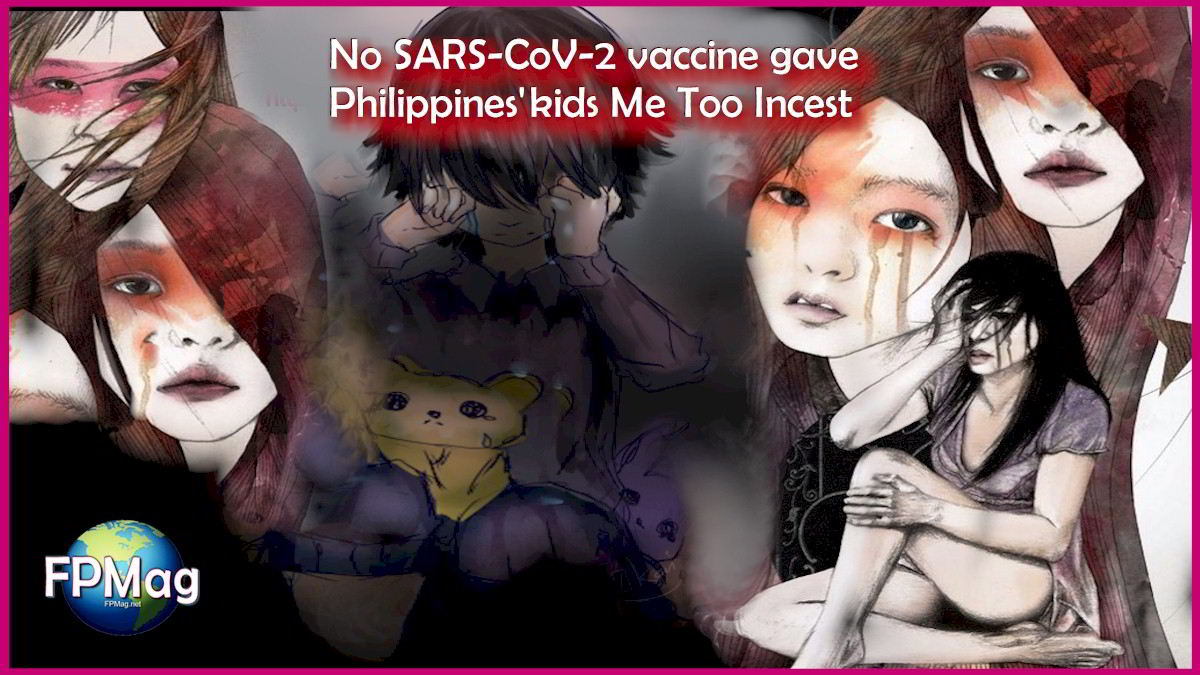 No SARS-CoV-2 vaccine gave Philippines kids #MeTooIncest.
A year-long confinement of children to home in the Philippines has led to a silent child rape, incest and suicide crisis, according to reports to RapeIsNoJoke rape crisis call-centers run by titanium women who don’t talk about what their callers say.
Photo Art/Cropping/Enhancement: Rosa Yamamoto FPMag

Police are rarely called on a rape crime in the Philippines for fear of  being raped again, this time by police officers or barangay officials says everybody around the courthouse in Lagawe, Ifugao in the Philippines this author attended back in 2019. The Philippines President reportedly encourages rape, especially if the victim is “beautiful”. Extremely few perps are convicted.

In the Philippines, the government made the age of consent 12 years of age many years ago—kiddies.

Complaints of rape are normally dismissed for the allegation that the child was a willing partner or the complainant “could not prove the child was under 12 at the time of the event”.

The law will allegedly change some time in the future.

Thanks to COVID-19 variants and the countries that just let the virus run wild and mutate into monsters, the child rape crisis, and femisecution obsession, in the Philippines grew worse and impunity for the crimes grew stronger.

“If we now go for large-scale relaxation of measures given the current existing situation and the circulation of variants and the fact it’ll still be many months (actually not for years, until 2023 according to Carlito Galvez, a government official in charge of vaccinations) before a large proportion of Filipinos are vaccinated, we may witness a situation where there’ll be an upsurge of cases and the overwhelming of the health,” WHO Country Representative Dr Rabindra Abeyasinghe said during a briefing on the Philippines state-run TV network.

Great. Another panacea for rapists and a disaster for kids as the perfunctory blabber of the misogynistic World Health Organization ignores the plight of women and children.

The Philippines needs a vaccine in order to get 34 million children out of their darkened prisons where unemployed desperate men hang out and back into school where there are fewer child rapes.

Vaccine-Dissent stirred in Manila this week among legislators as numerous conflicted reports on vaccines for Filipinos came to light and more than a month has passed since legislators were banned from making inquiries.

Unauthorized Covid-19 Vaccine mysteriously finds its way into the Philippines and into arms of government officials,  leaked by Duterte guards.

Philippine President Rodrigo Duterte told the head of his military detail in early January to ignore a Philippines Senate summons, probing to find the source of vaccines used to inoculate Duterte’s guards.

“Do not obey the summons,” Duterte told PSG chief Brig. Gen. Jesus Durante in a late-night televised address on 5 January. “I am ordering you to stay put in the barracks.”

Hence the can of worms was never opened.

Philippines Uses Draconian Methods of Oppression to Manage COVID-19, says report, which method according to statistical data is not working at all.

“Violence like that reported in Cebu City earlier this month is not uncommon, with reports of police beating up a fish seller in Quezon City and humiliating quarantine violators elsewhere by forcing them into cages made for dogs. At least two people have been fatally shot by police enforcing coronavirus restrictions and one officer has been accused of raping a woman.”

Since 16 March 2020, Philippines residents older than 65 and those under 16 years of age are  not allowed to leave their homes.

As the Philippines endures some of the worst femisecution in the world women’s emergency shelters and helplines are reporting dire consequences of sexual violence including rape and incest; physical harm; and homicide toward women and children.

“The militarized forced lockdown of children under 16 in the Philippines is a panacea for rapists. Imprisoning some 34 million children for a year is not only madness, but it is a child and mother’s nightmare of failed mental health,” says a nurse working in the Philippines who does not want to be identified because she says, “Barangay officials in my  region may think I am talking about their case and then kill me thinking they may be charged.”

Persons permitted from time to time to leave their homes-–depending on the current confinement category assigned to regions by President Duterte their homes— must wear face coverings of no particular type and a face shield of no particular type except the shield must cover from the forehead to below the chin.  In certain parts of the country, violation of these rules comes with the pain of violent beatings, caging, jail or murder.

Regardless of militarized lockdowns, Case Fatality rates in the Philippines are Rising

No other health authority in the world including the WHO and both American and European disease control organizations have indicated that non-medical face shields (open at the top and the bottom to let air pass through like an air scoop also allows whatever is in the air including large 5 micron droplets or larger of moisture) have any use in combatting the spread of COVID-19 disease among public wearers.

Most say there is a high risk of inhaling particles of the newer more dangerous variants of the virus through openings in one’s personal protection equipment.

Medical face shields that are closed at the top with a seal at the forehead do indeed have a use to combat SARS-CoV-2 in the splatter of coughed droplets in the case of hospital medical workers and other frontliners like waiters in a restaurant and cashiers in a grocery store, say experts across the universe of epidemiology.

Dr. Joy Henningsen, a  professor, at the University of Alabama at Birmingham School of Medicine, says that plastic medical face shields work best to “protect the wearer from an infected person when used with a face mask.”

Hence the Philippines is on the right track as long as the mask and face shield are compliant with medical or reasonable workplace safety standards, says the CDC.

SARS-CoV-2 is in the air, according to the World Health Organization and the US Centers for Disease Control and Prevention (CDC), and “can be inhaled through openings in the sides of personal protective devices that are not properly sealed”.

On Thursday, Philippines Senator Nancy Binay said in an interview with ABS-CBN News that, “The mere fact that we only have term sheets at the moment and we have yet to sign any supply agreement,  the delivery of the vaccines will always be a question. At this point the only thing that is sure is that it is still unsure when the vaccines will arrive.”

Senate Minority Leader Franklin Drilon declared in a written statement he felt  “It is very disappointing. I am worried for the future of our country. Each day we fail to start the vaccination raises the risk of further spread of the virus and makes our economic recovery longer,” he added.

2) Rape-Helpline Worker says, “We need vaccines before unemployed men have raped all the kids.”

“It’s a social and economic problem as well as being a health care problem,” says Katie Alsop who is a founder of RINJ.

The Philippines government has reportedly said that it intends to vaccinate its  population of more than 110 million by the year 2023 according to information from a Senate briefing in January by Carlito Galvez, a government official in charge of vaccinations.

“Lockdowns that imprison children are an emergency crisis that cannot wait for relief until 2023,” says Alsop.

Galvez also said that vaccinating the people of Manila will be the main priority for 2021.

“Many are baffled by our situation. Out of the 10 countries in Southeast Asia, six have already started inoculating their citizens,” Minority Leader Drilon said. Cambodia, Indonesia, Laos, Myanmar, Vietnam, and Singapore have already begun inoculating the public, he added.

Hopefully not a Sinopharm Fail?

A Philippines 43-year-old male migrant worker who returned recently  from the United Arab Emirates has tested positive for COVID-19 on 8 February (results availed on 9 February), but what is more worrisome is that he had been vaccinated in UAE with the Sinopharm (China) vaccine.

Dr. Mary Jean Loreche, spokesperson for the Philippines Department of Health Central Visayas, told news media  Thursday that the male traveler had been vaccinated with two doses of Sinopharm on 12 December last year and  received the second jab  on 2 January 2021.

Dr. Loreche has repeatedly explained in media statements and interviews that getting vaccinated does not mean that the person will never be infected with COVID-19. She said the vaccine helps prevent a patient from developing a more severe illness.

Of the 43-year-old male she said, “This is classically manifested by our particular case who did not show any symptoms even though he tested positive for SARS-CoV-2.”

The Chinese state-owned company Sinopharm makes the vaccine.  Non-viable viral particles comprise the base of the traditional type of vaccine to expose the body’s immune system.

“This method is used in many well known vaccines, like rabies,” Associate Prof Luo Dahai of the Nanyang Technological University told the BBC.


Here are the reported and estimated Philippines data.

Philippines Forecasts in COVID-19 Deaths to May 2021 Source: Civil Society Partners in Solidarity against COVID-19