Filipinos driven to epidemic of errors by Dengue heartbreak

Note: Everyone who has knowledge needs to speak up and help Philippines moms who are panicked by vaccination controversy. Regardless, hesitancy to speak publicly in the Philippines about this matter has caused sources to request anonymity. By attending at actual vaccination locations, FPMag has verified anonymous ‘frontliner’ claims of unwarranted vaccine hesitancy. This article introduces a new documentary video and new evidence on the subject of vaccinations in the Philippines by fellow journalists at Al Jazeera. This video (at the bottom of this article) is worth watching .

Everybody is Frustrated by Litigious Big Mouths on social Media

The nurse slammed down a box of surgical masks as she unpacked from a recent sortie into the Philippines provinces. A frontliner with vials of unused vaccines to prevent measles, rubella, and polio was frustrated. While consoling the returning medical worker, a supervisor nurse was told that while the worker was face-to-face with stubborn angry moms arguing against vaccination, “children were dying from measles and contracting polio at a rate high enough that while the conversation took place, children were falling sick”.

Today’s Philippines health ministry undersecretary Dr. Gerardo Bayugo has been in the field himself pushing for remedial action against viral disease with a syringe in hand. What is the required action? Vaccinate. Vaccines work. The Dengue vaccine has worked but read the instructions.

Phase 2 of a Philippines rubella, and polio supplemental immunization project is beginning this month in Visayas Regions, National Capital Region, Central Luzon, and Calabarzon. Children 9-59 months old will be given Measles and Rubella jabs while 0-59 months-old children will be provided with oral Polio vaccine.

“Despite the COVID-19 pandemic, a high-quality immunization activity is urgently needed to avert a possible measles outbreak in 2021 and halt the ongoing polio recirculation in communities. We encourage parents and caregivers to have their children immunized”, Health Secretary Francisco T. Duque III said, emphasizing that the measles, rubella and polio vaccines are safe, effective and free.

Scientists have indicated that sickness from measles, rubella and polio can produce a comorbid condition to even a mild case of COVID-19 with terrible outcomes whereas the COVID-19 could have passed without harm had the patient not already been ill. These three illnesses, measles, rubella and polio, can have a serious outcome on their own and are extremely infectious, say doctors throughout the entire past century.

“This is nothing new,” says Karinna Angeles, a nurse practitioner currently in upper Luzon island of the Philippines.

“The immunization treatments for these illnesses have been around on this Earth longer than I have been alive and they are safe, simple and effective. We once had these diseases stopped in my country and since vaccination dropped to about 50% or less of the eligible (once over 87%)  population there is nearly an epidemic spread of these illnesses.”

“I probably cannot shame parents on this because they have dozens of stupid excuses why they don’t get their kids vaccinated but I assure everyone I see that preventing a child’s immunization is guaranteed to be a death sentence for many children,” said the worried, caring nurse. 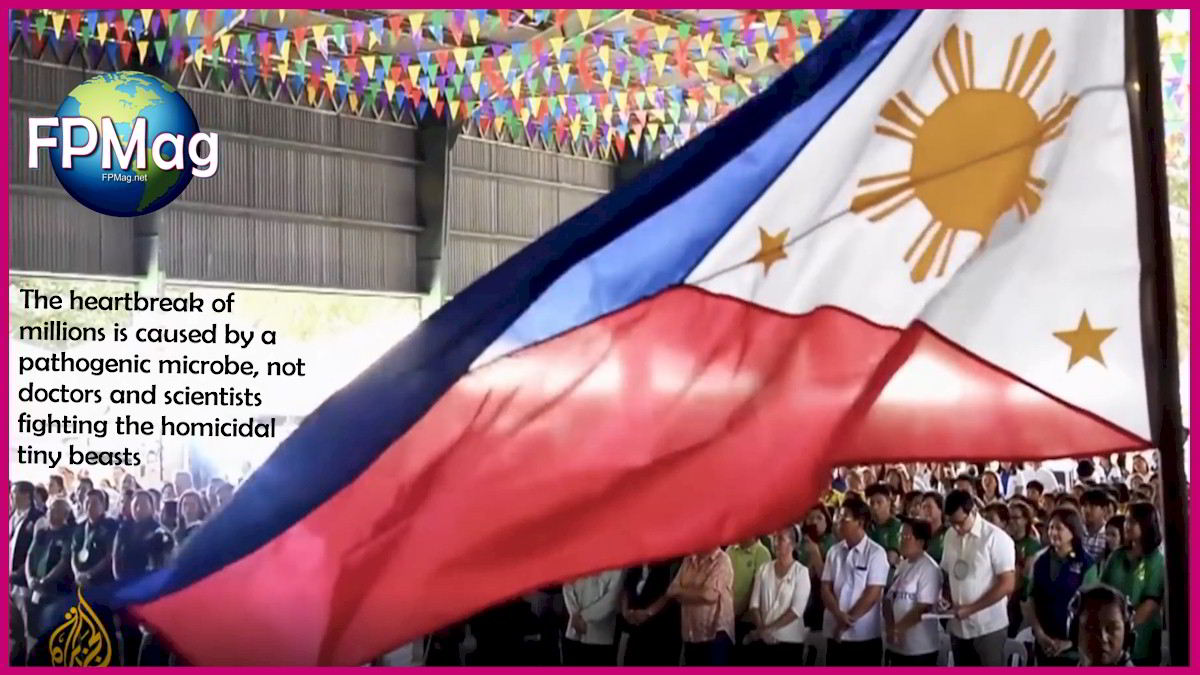 “The heartbreak is caused by sickness, not the doctors and scientists who fight sickness,” say frontline workers who truly should know and do know the facts. On November 29, 2017, French drugmaker Sanofi Pasteur released a statement (Dengue-Press-Release-2017-11-29 17-36-30-1210526-en) stating that their Dengue vaccine, Dengvaxia, posed risk to individuals vaccinated without having prior dengue infection. This came some time after reports circulated of Filipino children dying allegedly from complications associated with the vaccine. Soon after, the Philippine Department of Health (DOH) which had been an early adopter of the vaccine, suspended the Dengue vaccination programme with DOH Secretary Francisco Duque saying “In the light of this new analysis, the DOH will place the dengue vaccination on hold while review and consultation is ongoing with experts, key stakeholders and the World Health Organization. The controversy has more misinformation than peer-reviewed fact, and numerous criminal and civil litigations that spew as much hysteria as did child deaths blamed without proof on the vaccine. Over twenty countries use the vaccine today with success.  Photo Art/Cropping/Enhancement: Rosa Yamamoto FPMag

FPMag asked the supervisor what was the remedy going to be in her view? She was terrified she would be identified and her ‘unprofessional’ behaviour’ (crying for sick children?) would be exposed.

“Get rid of Facebook lies,” she said. “We need to vaccinate children for measles, polio, rubella and more… Misinformation  is killing kids,” she ventured. 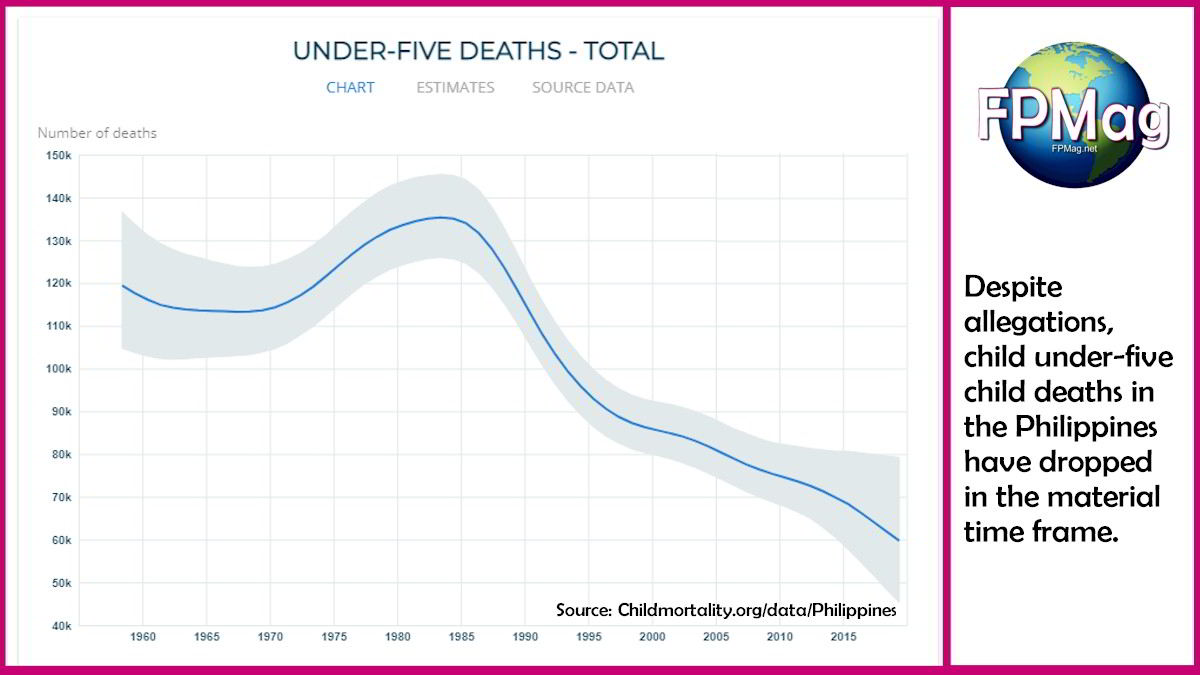 Despite allegations, and because of vaccinations, under-five child deaths in the Philippines have dropped in the material time frame of the recent Dengvaxia controversy. Source: Child Mortality Org.

The language of litigation risks killing kids as it illegitimately and ultimately breeds more and more vaccine hesitancy.

More than 830,000 Philippines schoolchildren were vaccinated with Dengvaxia beginning April 2016. At the same time that under-five child deaths have dropped significantly in the Philippines accusations of government corruption, supplier error and vaccine ineffectiveness. But Dengue was the killer, not vaccines. There has been no peer-reviewed alternative conclusion that is worthy. 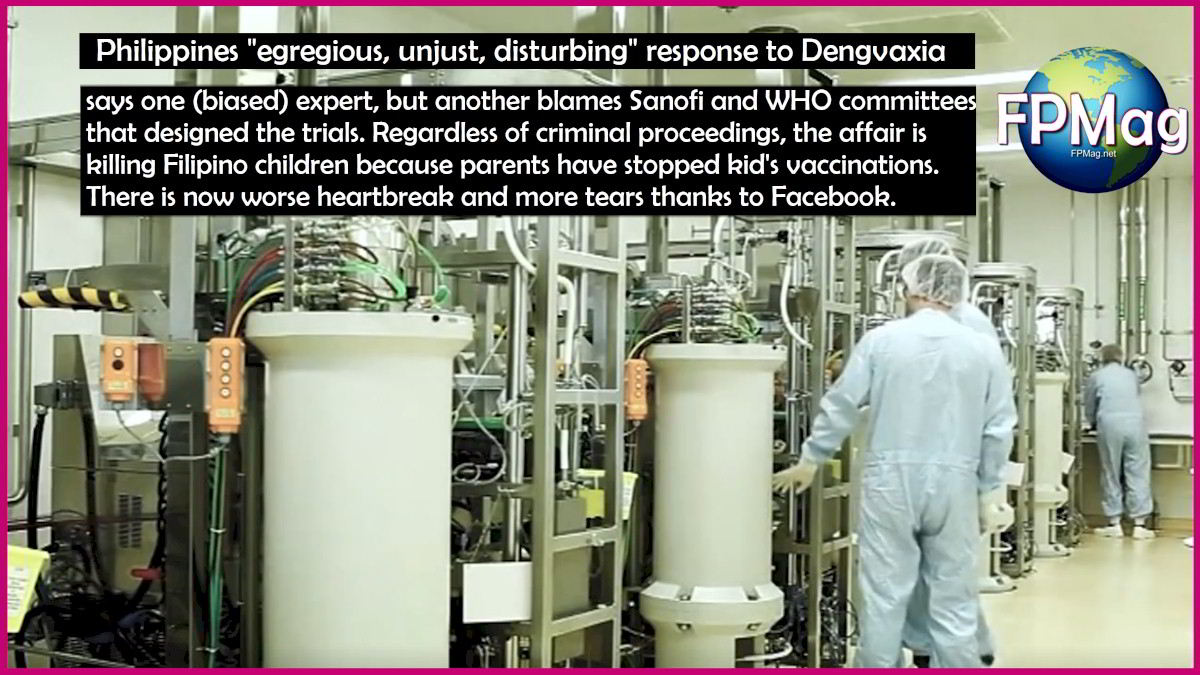 “Considering that accused Stanlas Camart, Jean Louise Grunwald and Jean Francois Vacherand DID NOT appear on the scheduled hearing for their arraignment, warrants for their arrest had been issued by the court, copy furnished the National Bureau of Investigation, Philippine National Police and the Embassy of France,” Branch 107 Judge Jose Bautista Jr.’s order read. The court has set the pre-trial conference and the arraignment of the other accused on 3 March 2021 at 2 p.m.  “Yes, we plan to coordinate with the French Embassy,” Public Attorney’s Office chief Persida Acosta told reporters.  Sanofi Pasteur, the manufacturer of the Dengvaxia vaccine, maintained its vaccine was “safe and effective,” saying “no criminal charges had been filed against their officials and that the litigation was still in its preliminary stages.” This language of litigation is killing kids as it illegitimately breeds more and more vaccine hesitancy. Photo Art/Cropping/Enhancement: Rosa Yamamoto FPMag

The two nurses introduced earlier turned to the author and let go of a litany of frustration, repeating what mothers had told them; about what they had been reading on Facebook from two sides of a litigation over the Dengvaxia controversy in a world where government bureaucrats are worried about making mistakes in case they are imprisoned and/or murdered?

“Yes it is that extreme,” she answered.

The two medical workers  were figuratively tearing their hair out in frustration and this is the core of a story about incomprehensible heartache that is causing mothers to make terrible mistakes. Blame for the heartache may well be misplaced. Vaccines work and there is no doubt about that.

“You can find people who say: the Earth is flat; they were kidnapped by aliens; the moon is made of cheese; and vaccines are demonic; and they are all the same BS,”  says nurse Angeles.

“We need parents’ cooperation in measles, rubella, polio mass vaccination”, says a worker with the department of health in the Philippines.

Dr. Gerardo Bayugo in late January stressed the importance of immunization in disease prevention, especially among children, saying, “To successfully implement our campaign, we need to  address the public’s fear of immunization side effects, which is further aggravated by the proliferation of fake news and the socio-economic conditions of Filipino families which hinder them from availing the immunization services. This fear and hesitation has become more evident now more than ever with the COVID-19 pandemic.”

The undersecretary’s words mirrored what the nurses with the health-giving jabs have been saying.

People familiar with the Philippines legal controversies who were not authorized to comment and request anonymity because of their fear of recrimination by one or the other side in fierce legal battles, say that “Filipinos have been unjustly treated by a circumstance and need to realize that nobody is to blame but a virus.”

“If you look over the facts, it is clear, everyone did their job, some better than others. There are risks in being an early adopter of anything. That doesn’t mean that the Philippines realized those risks or was used as a proverbial ‘guinea pig’. There is no sound logic to that. But the arguments on Facebook are wacko and now people believe wacko, but vaccines work,” says a source candidly.

“The heartbreak of  a lost child is caused by pathogenic microbes called Dengue, not doctors and scientists fighting the homicidal tiny beasts,” is what Sharon Santiago says her research into the matter has revealed. “We have learned that the public has heard so much misinformation from a multifaceted fight over the Dengvaxia Conroversy. What we know for sure is that the vaccines work and saves lives.”