Certain Republican Senators back Nazis and White Supremacy militants. These mostly male Republicans will vote against impeaching Trump. Who will join them in Pelosi’s trap?

The US Senate trial of Donald Trump validates a theory that politics draws sociopaths. Sociopathic politicians then draw their own kind to themselves in fickle, painful and dangerous relationships.

“Shoot the politicians!” somebody yelled.
“Fight for Trump!”
“Where’s the traitors?”

“Get these [expletives] Commies out!”

Which of the GOP Senators support, “Hang Mike Pence”? 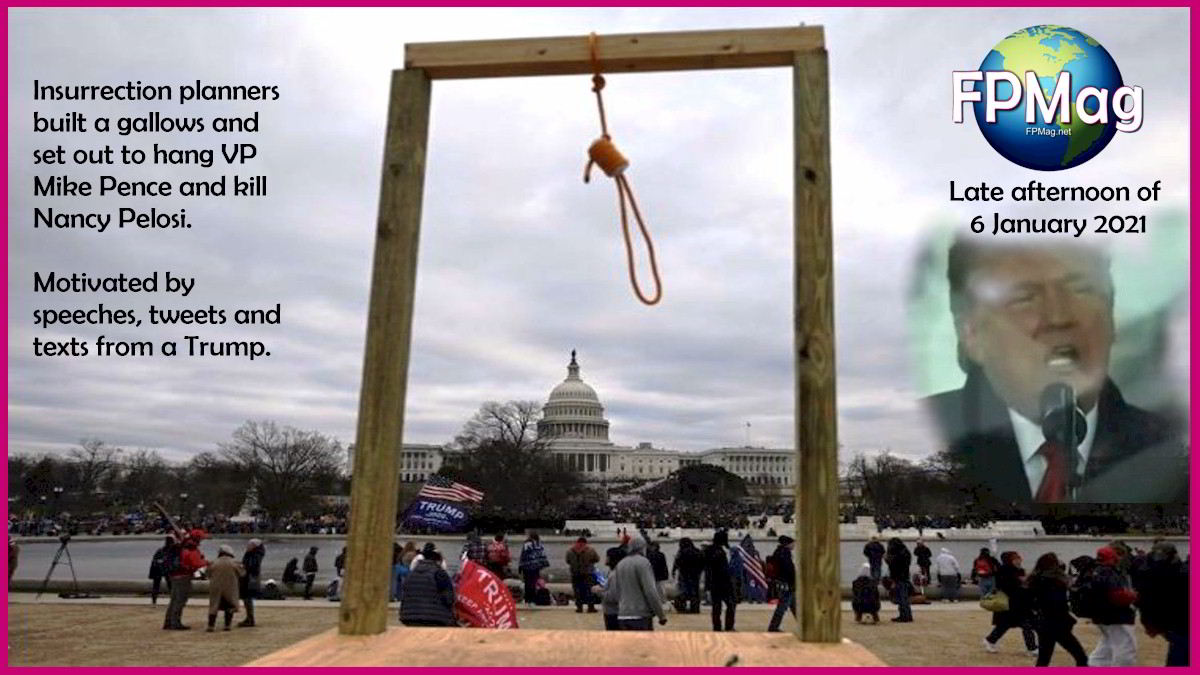 “Hang Mike Pence!” people yelled. And they built a gallows on the grass in front of the Capitol Building. Insurrection planners built a gallows and set out to hang VP Mike Pence and kill Nancy Pelosi. Motivated by speeches, tweets and texts from Trump. Photo Credit: Twitter. Photo Art/Cropping/Enhancement: Rosa Yamamoto FPMag

The critical mass of the US Republican Party has been radicalized. Maybe they liked that? Watch nancy Pelosi’s trap.

Here is a list of the names of persons who are charged by the FBI for acts relating to the violent insurrection at the US Capitol Building on 6 January. The list of their crimes is here.

Many of the accused persons, in their defence, are going to name names of public officials who they will blame for their actions as leaders of events at the Capitol Building that transpired, 6 January 2021.

An honourable police officer was killed by the mob or parties within the mob on 6 January 2021. Rest assured that anyone complicit directly or indirectly in that crime that attacks the concept of protecting the public, will face the wrath of good, loyal American people and their law enforcement community.

Who in the GOP will be found complicit in the 6 January criminal acts?

Nancy Pelosi, Speaker of the United States House of Representatives is a devote Roman Catholic; she is a strait-edge human being. She loves her country with a passion and loves Americans even more. She is seething. She believes in the colour of right and sees the work of the ‘devil‘ as vile. Killing USCP Officer Brian Sicknick is stuck in her mind and she cannot let this go.

“Each day, when members enter the Capitol, this temple of democracy, we will remember his [USCP Officer Brian Sicknick] sacrifice,” said Speaker Pelosi.

Nancy Pelosi’s trap will inevitably end the careers of dozens of currently elected Republicans. When the shock wears off and Courts begin to hear the evidence  of crimes committed on 6 January and the radical statements of those who defend the deaths of 6 January, the voting public will retaliate against Republican nazi-lovers, QAnon GOP members; and those Republicans who still lust for armed violence against women like Michigan Governor Gretchen Whitmer.

Certain Radicalized Republicans have a lust for gore and violence. Their leader they support, is a murderer who sent violent militants into the House of their own government, some GOP members giving info tours to invaders, to hang the Vice President and murder the House Speaker.

The 6 January invasion of the Capitol Building was a preplanned event with phone conversations between Trump and civilian planners according to posts on Parler in late 2020, as well as GOP Senators who gave advance Capitol tours to help militant leaders know the routes they needed to use to attack the lawmakers and the US Vice President who would on 6 January be certifying the Electoral College votes for Joe Biden despite Trump’s demands that Pence not do that.

QAnon says Trump defends Earth from devil-worshiping pedophiles  who operate a secret child sex-trafficking ring. This alleged, very bizarre imaginary group is supposedly run by Hillary Clinton, who although at times quirky and less than truthful is not of that ilk.

The FBI has identified QAnon zealots as ‘extremists who comprise  a potential domestic US terror threat’.

According to Donald Trump who refused to denounce QAnon when asked by media, “I understand that they like me very much, which I appreciate.”

Who will join the supporters of American extremist militias by excusing Donald Trump’s insurrection of 6 January 2021, by voting with the QAnon/Nazi/Proud Boys supporters among GOP members?

Most Republican senators seem unable to play the current situation forward and realize the potential consequences of what they have done in their demagoguery of a TV reality show psychopath.

Any act that endorses the 6 January insurrection at the US Capitol Building in Washington DC is an act of a co-conspirator.

Donald Trump is despised around the world and so is America. The conduct has been bloody and reprehensible.

This hasn’t ended. Half the US Senate is comprised of Trump’s like kind.

The picture and its story.

Trump tells terrorist group to “stand back and standby”. The Proud Boys led Trump’s 6 January 2021 attack on the US Capitol Building. 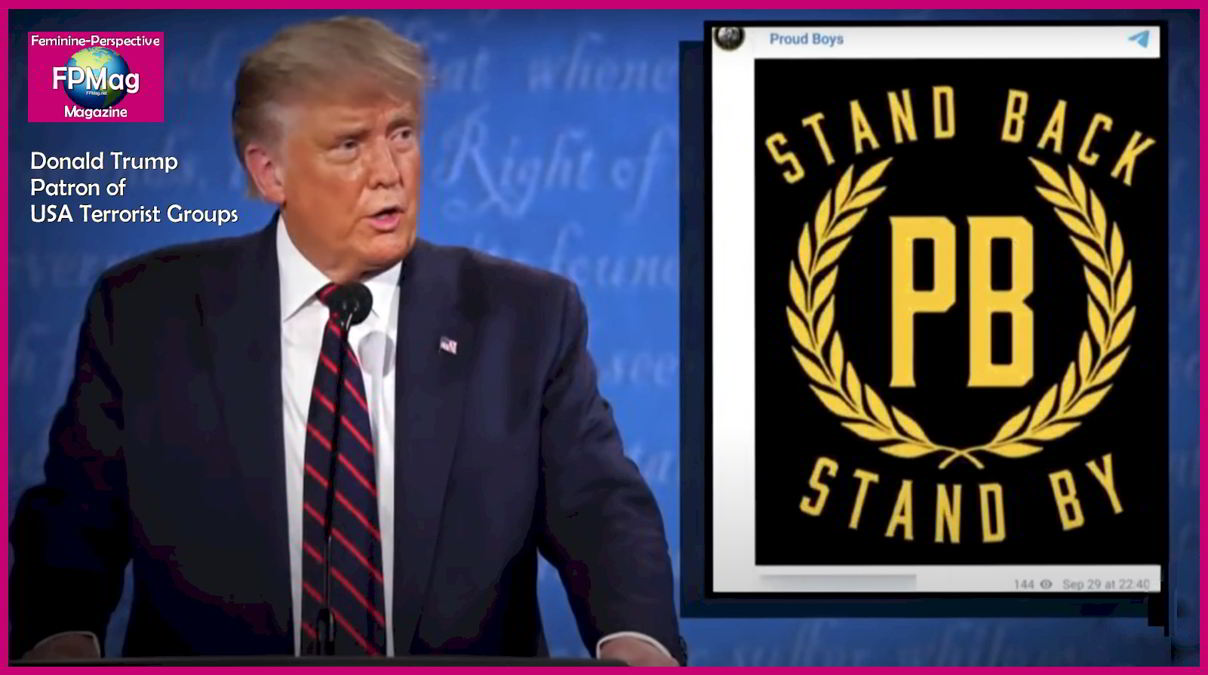 “Psychopaths consume an astonishingly disproportionate amount of criminal justice resources. The label psychopath is often used loosely by a variety of participants in the system—police, victims, prosecutors, judges, probation officers, parole and prison officials, even defense lawyers—as a kind of lay synonym for incorrigible. Law and psychiatry, even at the zenith of their rehabilitative optimism, both viewed psychopaths as a kind of exception that proved the rehabilitative rule. Psychopaths composed that small but embarrassing cohort whose very resistance to all manner of treatment seemed to be its defining characteristic.

“Psychopathy is a constellation of psychological symptoms that typically emerges early in childhood and affects all aspects of a sufferer’s life including relationships with family, friends, work, and school. The symptoms of psychopathy include shallow affect, lack of empathy, guilt and remorse, irresponsibility, and impulsivity (see Table 1 for a complete list of psychopathic symptoms). The best current estimate is that just less than 1% of all non-institutionalized males age 18 and over are psychopaths.1 This translates to approximately 1,150,000 adult males who would meet the criteria for psychopathy in the United States today.2 And of the approximately 6,720,000 adult males that are in prison, jail, parole, or probation,3 16%, or 1,075,000, are psychopaths.4 Thus, approximately 93% of adult male psychopaths in the United States are in prison, jail, parole, or probation,” citing  “The criminal psychopath: history, neuroscience, treatment, and economics.“

This is the type of person who is unperturbed by their own murders. 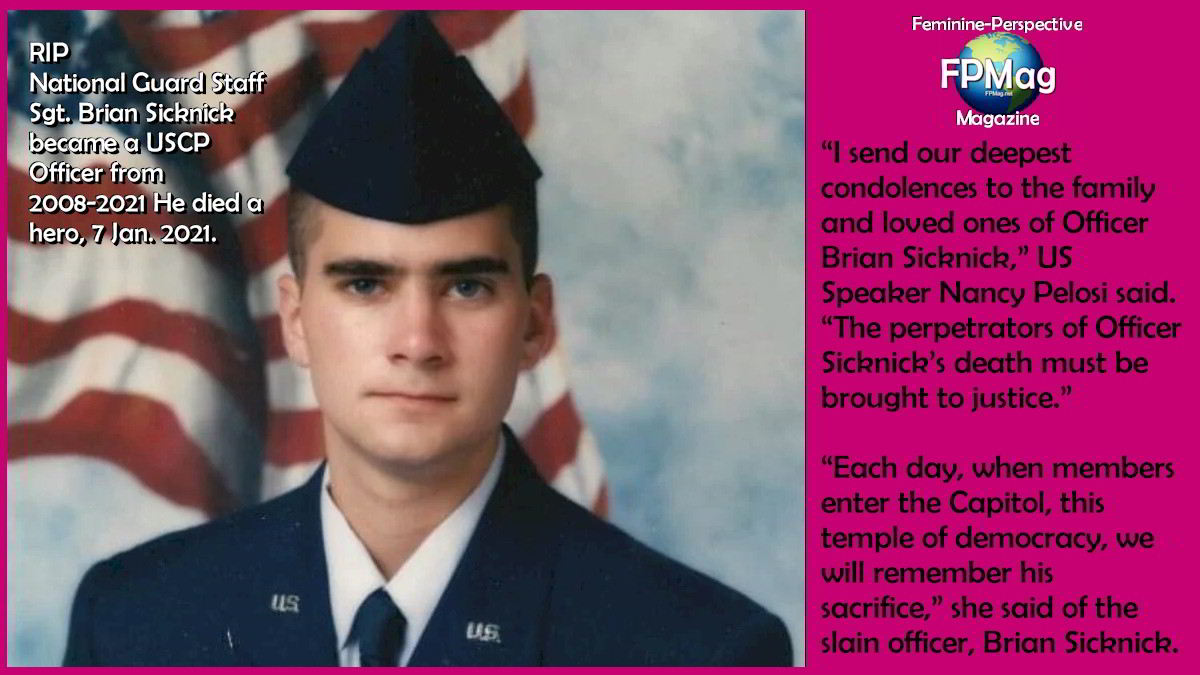 “I send our deepest condolences to the family and loved ones of Officer Brian Sicknick,” US Speaker Nancy Pelosi said. “The perpetrators of Officer Sicknick’s death must be brought to justice.”
“Each day, when members enter the Capitol, this temple of democracy, we will remember his sacrifice,” she said of the slain officer, Brian Sicknick. Photo Credit: New Jersey National Guard. Photo Art/Cropping/Enhancement: Rosa Yamamoto FPMag

Impeachment Managers introduce a video of part of their evidence.

President Trump said we are not giving up the White House.