Dining-out and double-masking will fail at dinner time

America is talking about opening restaurants meanwhile CDC likes the idea of double masking. It seems incongruent. Be honest, it’s stupid. Open up more restaurants but increase the number of masks people must peel off their faces so they can shove food into their gobs in closed spaces?

Taking one’s respirator mask off today, indoors, in the midst of strangers, while more transmissible variants of SARS-CoV-2 circulate, is contraindicated.

A smarter virus is aerosolized. Two meters distance won’t be a barrier to transmission of floating pathogens circulating in the air of closed spaces. 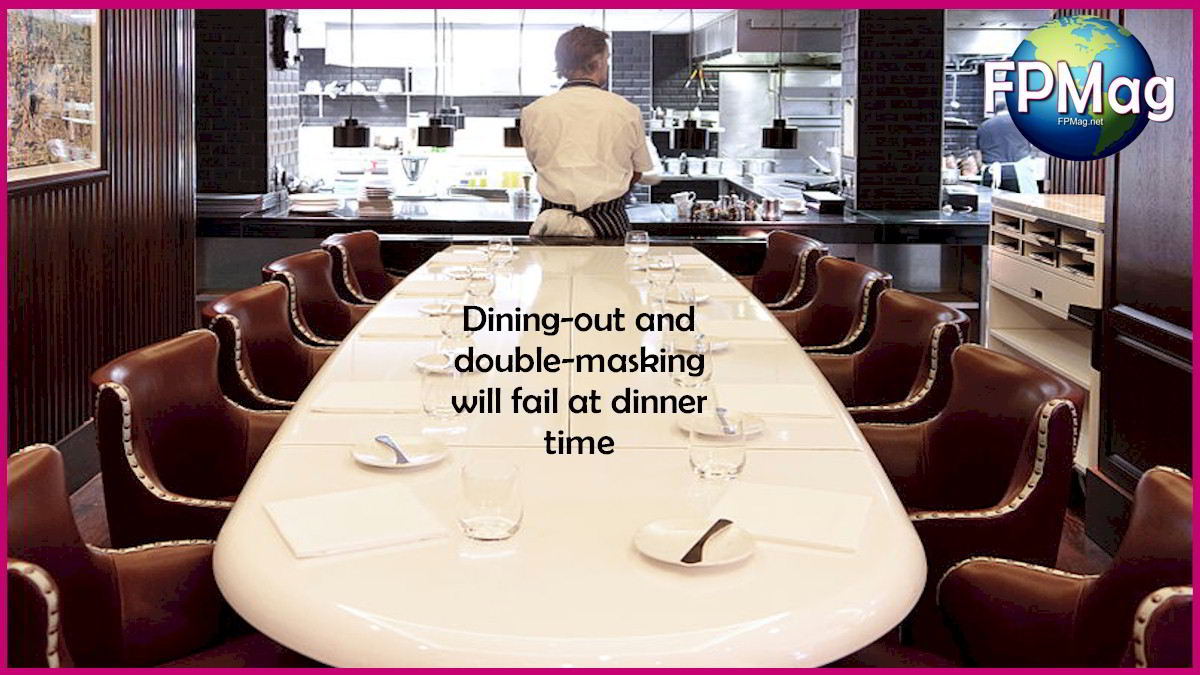 “Once a more contagious variant has established itself,” in a country, “stabilising the number of new infections will become increasingly difficult,” especially ‘if community transmission is allowed to get out of control,’ say scientists writing reports in The Lancet.

Studies indicate that the transmission rate could go to 140% (R=1.4) or more as compared to the original variant.

“With slowly increasing population immunity and evolutionary selection pressure on the virus, the emergence of new SARS-CoV-2 variants will continue, potentially leading to more contagious variants, and perhaps even variants for which existing vaccines are less effective.”

Citing The Lancet: “An action plan for pan-European defence against new SARS-CoV-2 variants“

Dining in an American restaurant is a potentially deadly prospect under the current pandemic circumstances. A couple of people out of every hundred who catch the SARS-CoV-2 virus will die. Others may be terribly sick and  die eventually as a result of the illness. Russian roulette anyone? It makes no sense to take that risk.

The zoonotic coronavirus which infected the world in 2020 was a novice at attacking humans. “The emergence of new SARS-CoV-2 variants will continue, potentially leading to more contagious variants, and perhaps even variants for which existing vaccines are less effective,”  says the Lancet report.

Now that SARS2 has a year of experience it is in the incipient stages of  morphing into something “more effective at entering human cells, avoiding identification by antibodies and reproducing itself in greater numbers,” say scientists.

Brazil, South Africa, the United Kingdom, France, the Netherlands and Germany have been finding that out as their infection numbers skyrocket.

America has only a tiny percentage of the more developed variants of the SARS2 virus. In another month the hospitals may again start filling up as the new variants from England, South Africa, and Brazil proliferate.

Mistakes will not be forgiven by new SARS2 variants. And there will be many new variants.

What all this means is that careless mistakes will result in grave danger of illness. Dining in restaurants in context seems like a crazy risk.

How many of those newer variants will be coughed into the air between bites in an eating establishment? The risk seems too high. Can the restaurant industry change to home delivery. Drones?

According to the CDC

But does one want to take their COVID-19 safety advice from a country at the global epicenter which has 34.45 % of global ‘active’ cases—people infected with COVID-19 right now. But the CDC is not suggesting anything controversial.

In other words, this 6 foot spacing in closed, inadequately ventilated spaces has not worked at all. Anything but a .3 micron filtering NIOSH standards respirator and eye protection is also  contraindicated but of course that cannot work while eating a meal in a restaurant which, hence, is also contraindicated.

America is talking about double masking a procedure mask with a cloth mask overtop, pulled tight to form a tighter fit. Not bad. But five or more layers of filtration in a single fit-tested N-95 NIOSH approved respirator mask is a much better idea.

So while CDC says “double mask”, why is America talking about opening eating establishments such as in Montgomery County in Maryland this weekend?

Imagine what the virus would say if it could. It can’t. It’s a mindless homicidal parasitic biological robot which will proliferate under these circumstances.

“We don’t have a long distance airliner that can reach Beijing but we can turn our Bell-47-G helicopter upside down and screw you all the way through the Earth to China.”

Why not just produce proper respirators and wear them?

America. What are you doing?

Double masking is interesting and has been used around the world to good effect against pollution but buying a few less missiles and spending the money on N-95 respirators for everyone is a much better idea.

Looping strings around ones’ ears has not proven as effective in forming a respirator seal according to literature of various FFP respirator mask manufacturers. Some KN-95 designs seem to seal naturally on Asian faces with really good elastic loops around the ears. But they are one-time use only or the seal is lost.

One elastic string must be over top of the head and one behind the head, a method with high adjustability in order for the mask to seat and seal on most human head shapes and then be reworn another day, although that was not the original purpose. But the range of adjustability was intended to facilitate a successful fit-test.

In a laboratory test environment, tying a rag over top of a spit barrier mask and knotting the loops until tight is a cute idea until the wearer talks or walks or runs, yawns, breaths or feels the need to adjust the mask which drastically reduces the efficacy of the face wrappings.

Why not Wear a Filtering Facepiece Respirator like the Germans wear?

“There is evidence that under certain conditions, people with COVID-19 seem to have infected others who were more than 6 feet away. This is called airborne transmission. These transmissions occurred within enclosed spaces that had inadequate ventilation. Available data indicate that it is much more common for the virus that causes COVID-19 to spread through close contact with a person who has COVID-19 than through airborne transmission,” says the CDC.

In other words, “if people wish to take the chance…”, good luck.

But it would be better to end this pandemic once and for all instead of playing Russian Roulette. What the American government has achieved so far with its mitigation effort is kill over half a million Americans (excess deaths).

It is contraindicated to wear anything over top of a respirator. Fit-test the respirator, adjusting as needed  and wear it when going out, say doctors like those at Harvard University.

Buy food while masked and bring the food home. Once safe at home, take off the mask, wash hands, and then eat.

Do not wear a respirator with an easy-breathing filter valve such as those used on dust masks. Wear a medical grade mask capable of filtering inhalation and exhalation of microscopic biological pathogens.

The care needed to fit-test and wear a filtering facepiece respirator mask that is reused up to five times.