Canada active cases drop until Virus Process-Of-Change prevails. The next surge will not be the neophyte bat virus.

The next pandemic surge for Canada will be driven by a more sophisticated hunter/killer variant of SARS-CoV-2, maybe the E484K, is what scientists are starting to warn about.

SARS-CoV-2 of any variation has no brain, no independent life, only a very good survival DNA/RNA blueprint. It has likely been on Earth for millions of years. Humans have not. It doesn’t intend to kill its hosts; that may be exclusively a fact of human immune systems going berserk when anything tries to alter the human DNA. Altering human DNA is what this pandemic coronavirus does in order to make thousands of copies of itself.

Threat to humans lie ahead in the SARS-CoV-2 Process-of-Change. That’s why the current drop in active cases is only a “blip”. 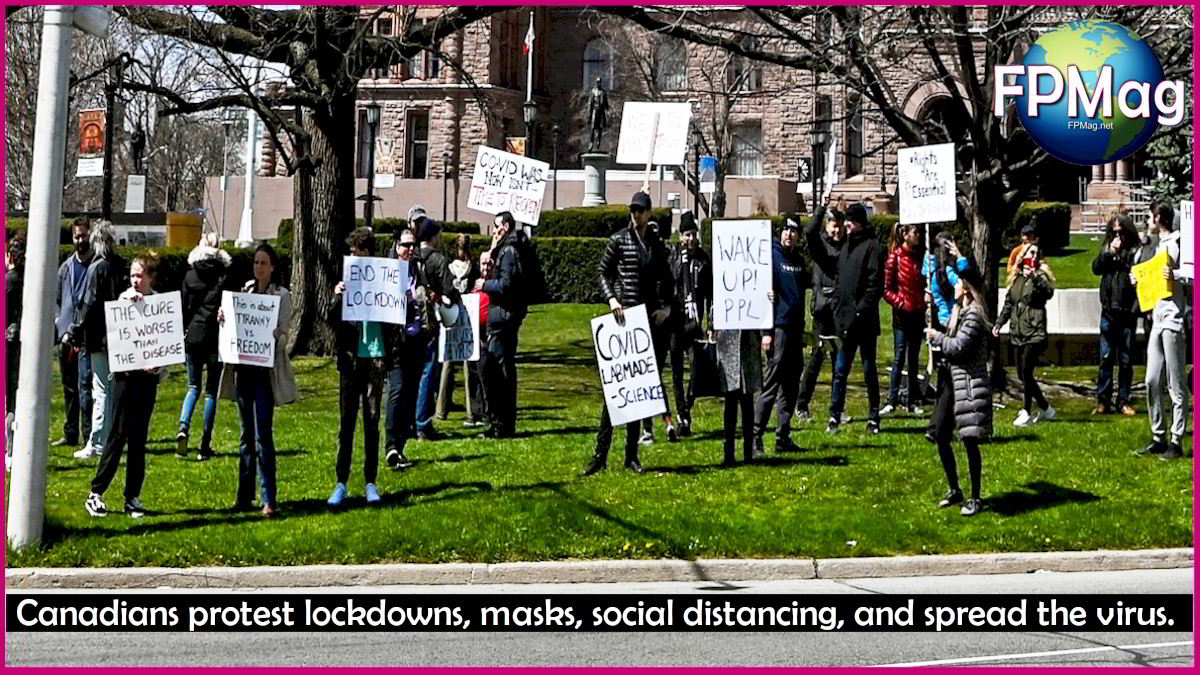 This is a file photo of Canadians protesting lockdowns among other things in April 2020. Why lockdowns now in early 2021? As some Canadians protest lockdowns, masks, social distancing, they spread the coronavirus.
Canada had reached a catastrophic level of community infection spread. THe governments had to do something.
Photo Credit: Michael Swan.  ~ Substantial Art/Cropping/Enhancement: Rosa Yamamoto FPMag

What do scientists know this far?

This is only a peripheral looksee.

“What we’re seeing is similar mutations arising in multiple places,” says Adam Lauring, a virologist at the University of Michigan. “That’s pretty suggestive that these mutations are doing something.”

The Canadian Lockdowns proved something

Canadian governments may have proven that Canadians have been acting recklessly. That proof, in part, may have been obtained by improper means, say some legal experts. But not the scientists. To whom will Canadians want to listen?

Government is supposed to listen to science when it comes to managing enormous threats against constituent populations.

The SARS-CoV-2 virus is an unprecedented threat to humans.

“We are very concerned about the UK variant in circulation within York Region [Ontario, Canada]. It is important to curb this COVID-19 variant spread as quickly as we can,” said Patrick Casey, York’s Director of Corporate Communications.

“We are expeditiously contacting the close contacts of the [36] cases in order to ensure there isn’t any unwitting transmission happening.”

Most provinces now report the presence of the British variant but a more granular analysis is not available. What needs to be known is the presence of the B.1.1.7 with the E484K traits, an N502Y modification that changes the form of the virus’ protein spike which many vaccines use as an identification factor.

Many modifications of the virus are quirks and cause the demise of the virus particles possessing that quirk, say scientists.  Other changes are not mistakes but well-learned valid modifications allowed as a result of spending a long time in human bodies, months of uninterrupted occupation of say an immunodeficient host.

The longer the virus reproduces in human hosts, the more dangerous it will become due to advanced learning of human cellular vulnerabilities, say most epidemiologists.

This pandemic does not exist in isolation of another threat to humanity: Climate Change caused by mankind’s environmental destruction may send humans to an extinction before the “6th Global Extinction which in the context of Earth’s long history is rapidly approaching,” says NASA.

Within this continuing event, the COVID-19 Pandemic, scientists see environmental impacts of the human existence that brought massive climate change causing the extinction of hundreds of species that have shed their viruses and shared zoonotic disease with human mammals. It is hard to ignore. But many prefer to ignore.

“We are like butterflies who flutter for a day and think it is forever.”—Carl Sagan

Getting back to claiming Canadians as reckless, yes, it is a strong statement, but when governments in the coldish winter of Canada decided that people were not abiding public health guidelines of mask wearing and social distancing, some Canadian provincial governments slammed the gavel down and sent people into their homes in lockdowns. Which is better? The sickness leading to death or the tough prevention?

When a person (or government as a whole) observes another taking self-harming actions that could lead to death, should they intervene?

In Quebec, for example, straying far from one’s home can bring a hefty fine and even jail time if the scofflaw gives police a hard time. This has been of course challenged by civil rights experts and will likely fail in any court test, say experts. The authors of the  Canadian Constitution did not clearly foresee WWIII or an extinction-level virus pandemic coupled to climate change. 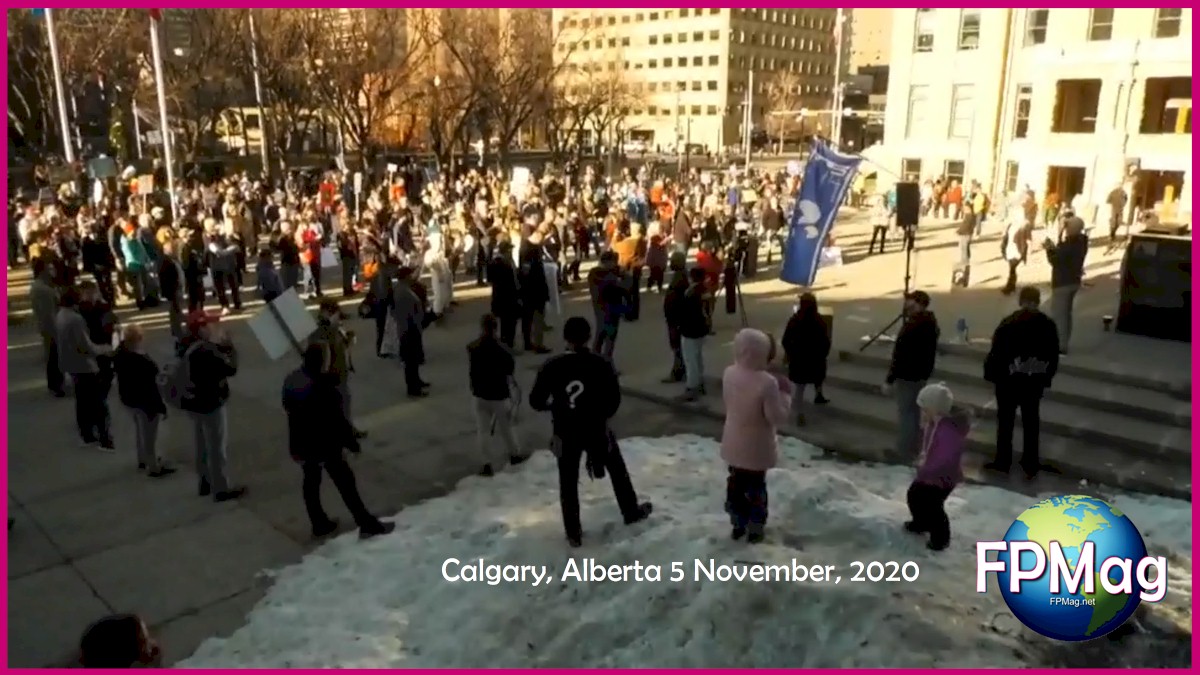 Looking only at law, ignoring the human condition under threat?

“The legacy in the long run will be that during good times, under normal circumstances, governments respect fundamental rights but when the going gets rough, individual rights and the Charters can be ignored,” warns Stéphane Beaulac, counsel at Dentons and a law professor at the Université de Montréal, with an expertise in Canadian constitutional law.

“It curbs the progress made since the second World War which values the legal protection of individual rights.”

Most of these points are mute if civilization fails to exist after the next five years of COVID-19. There may be no courts and no lawyers, only gatherers and hunters of food if pandemic mitigation fails. 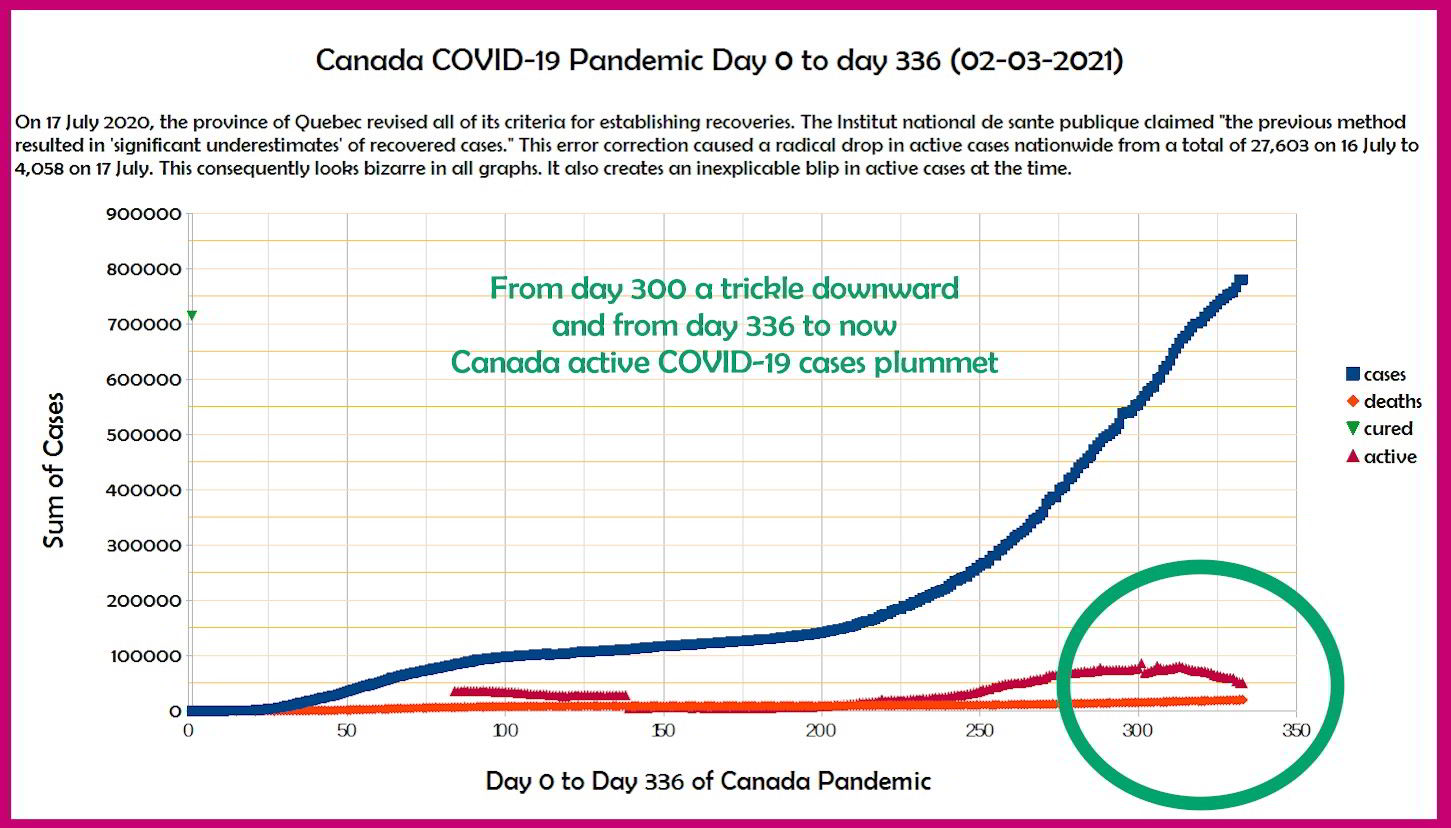 By sending people into their houses, Canadian lawmakers have caused the number of active cases to plummet in freefall. From day 300 a trickle downward and from day 325 to now Canada active COVID-19 cases plummet, likely due to strict mitigation efforts and vaccination. Source: Civil Society Solidarity Partners against COVID-19

So where’s the proof Canadians have ignored Public Health Rules?

By sending people into their houses in a lockdown, Canadian lawmakers have caused the number of active cases to plummet in freefall.

From day 300 of the Canadian portion of the pandemic, a trickle downward and from day 325 to today’s date (day 336 of the pandemic), Canada ‘s active COVID-19 cases have plummeted, likely due to strict mitigation efforts and vaccination.

This is not to say that the pandemic is ending. Quite the contrary, it is almost out of control still. It could even be argued that scientists and government officials are fighting to prevent the pandemic becoming an extinction level event. They are. They should.

As FPMag has reported many times, the fear is that as the SARS-CoV-2 continues to harvest human hosts, it learns more about the human body. 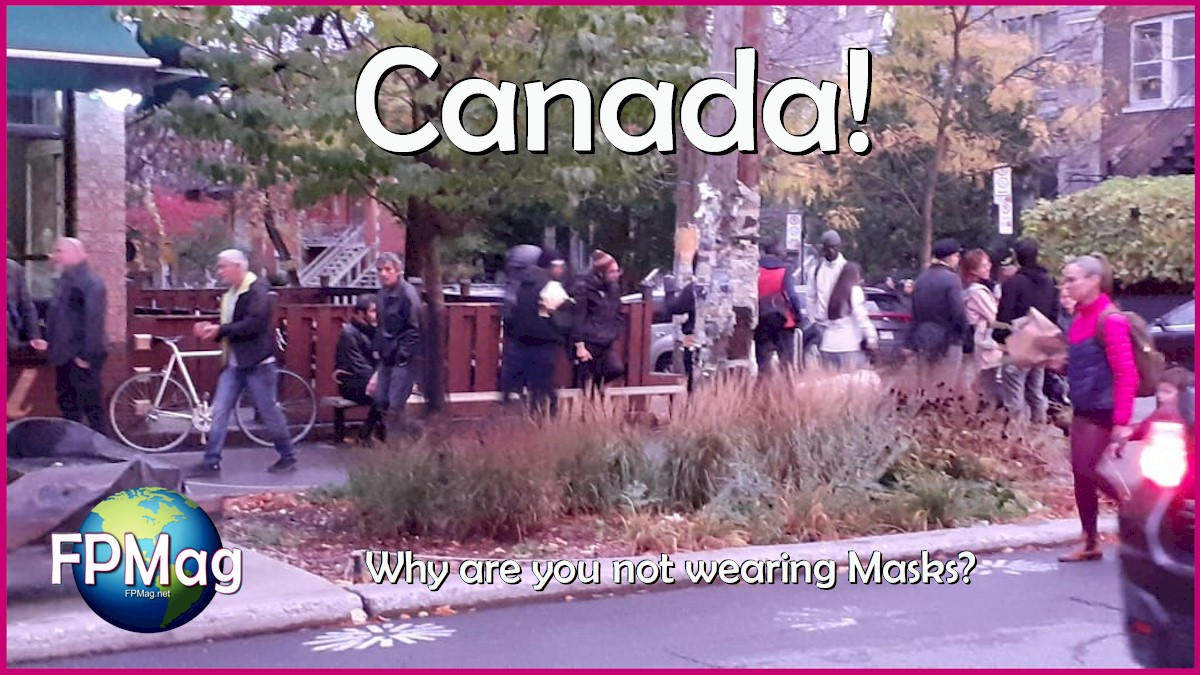 Canada. Why are you not wearing masks? Montreal File Photo. See: Only Canadians can stop SARS2 in Canada. Government leads well. People must follow.

SARS-CoV-2 is far advanced in its simple mechanisms for survival. Now that it is inside humans, it is learning the cell structures of human bodies and human immune systems and adjusting itself and its own DNA/RNA and actual physical structure to better infect and propagate itself.

Wear a Filtering Facepiece Respirator like the Germans wear.

While active cases are dropping the fear of yet another massive surge is growing stronger.

Harvard Professor says N95 mask wearing will end Pandemic as has been said here in FPMag for  a year.

According to a recent study released by The Lancet, “COVID-19, structural racism, and migrant health in Canada“:

“Canada is a large global economy, with universal health care and a high proportion of migrants. Canada has a long history of racism and colonial violence, dispossession, and oppression of Indigenous peoples and communities that has been linked to a plethora of health and social inequities, including racist treatment within health care, and intergenerational trauma.

“While data on race and migration status are scarce within COVID-19 surveillance and public health research nationally, we know that migrants in Canada faced barriers to health care before the pandemic, and data from some settings in Canada show inequities that reflect findings from the USA and elsewhere.

“In Ontario, migrants represent just over 25% of the population but 43·5% of COVID-19 cases, mostly racialised visible minorities. In Toronto, racialised newcomers are over-represented in hospital admissions for COVID-19, and migrants in British Columbia who are waiting for their applications to be processed are, alarmingly, slated to be excluded from receipt of public health care in early 2021.9 These crucial gaps in Canada’s COVID-19 response highlight a need to consider and intervene in structural racism as a core part of the pandemic response and recovery process.”—Citing The Lancet 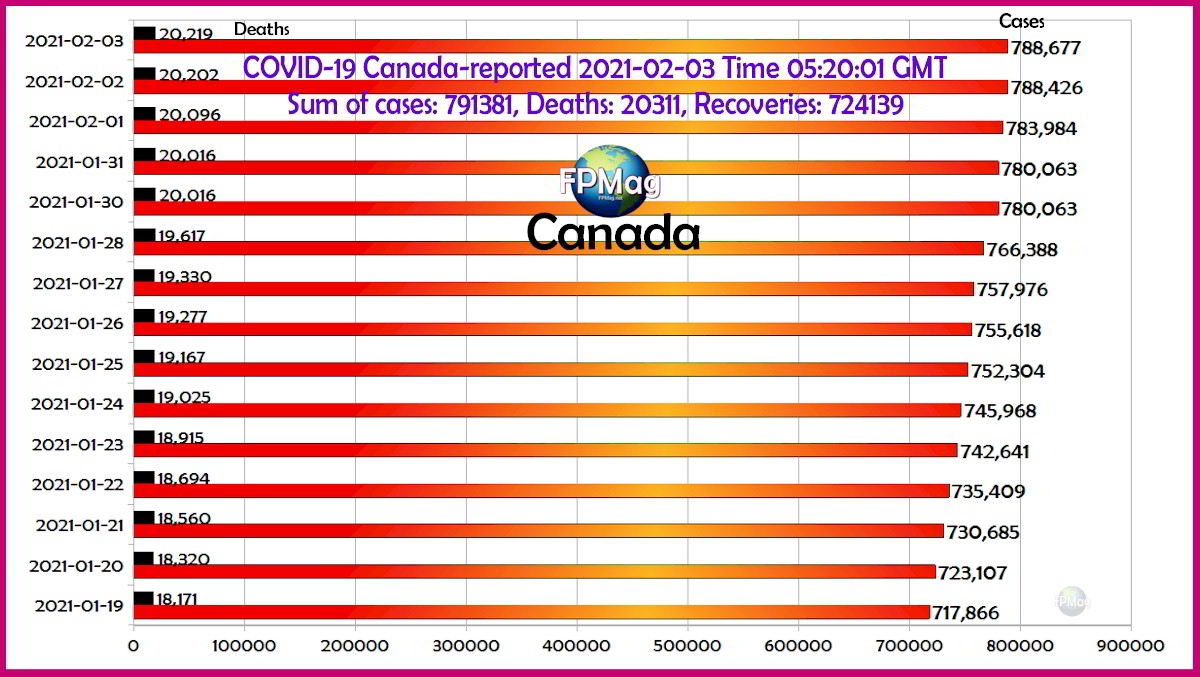 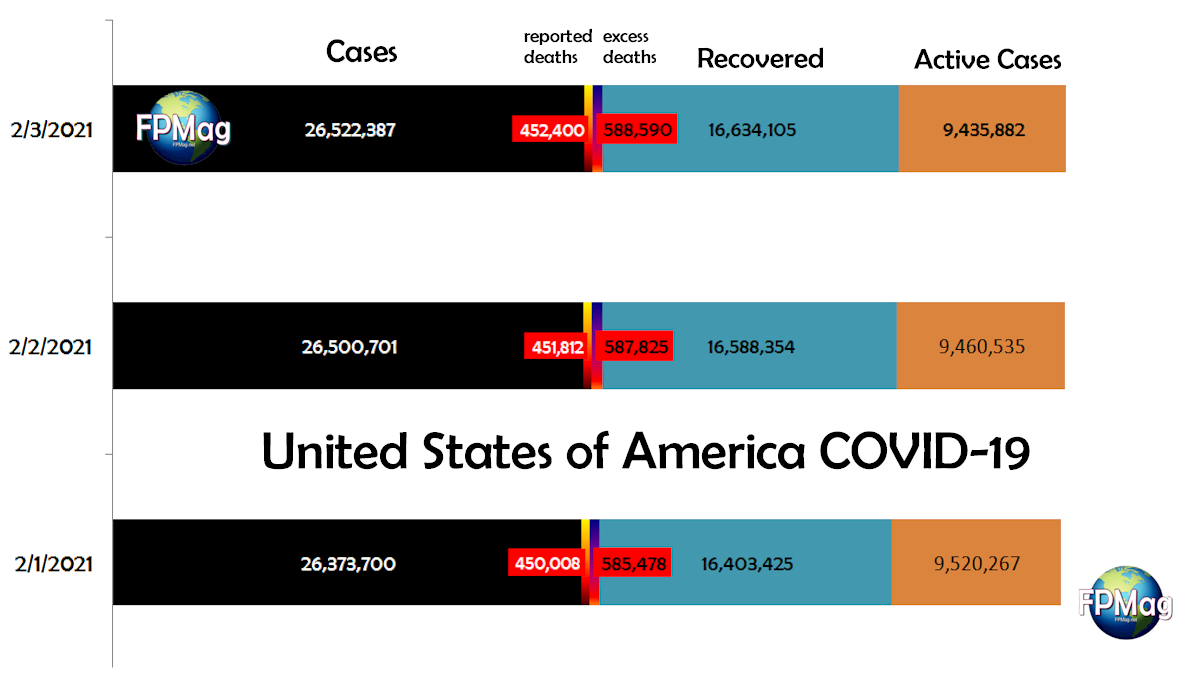 USA three-day complete data to morning of 3 February GMT show a decline in active cases which experts fear may be short-lived because of the incipient stages of spreading variants from England, Brazil and South Africa. Source: Civil Society Solidarity Partners against COVID-19 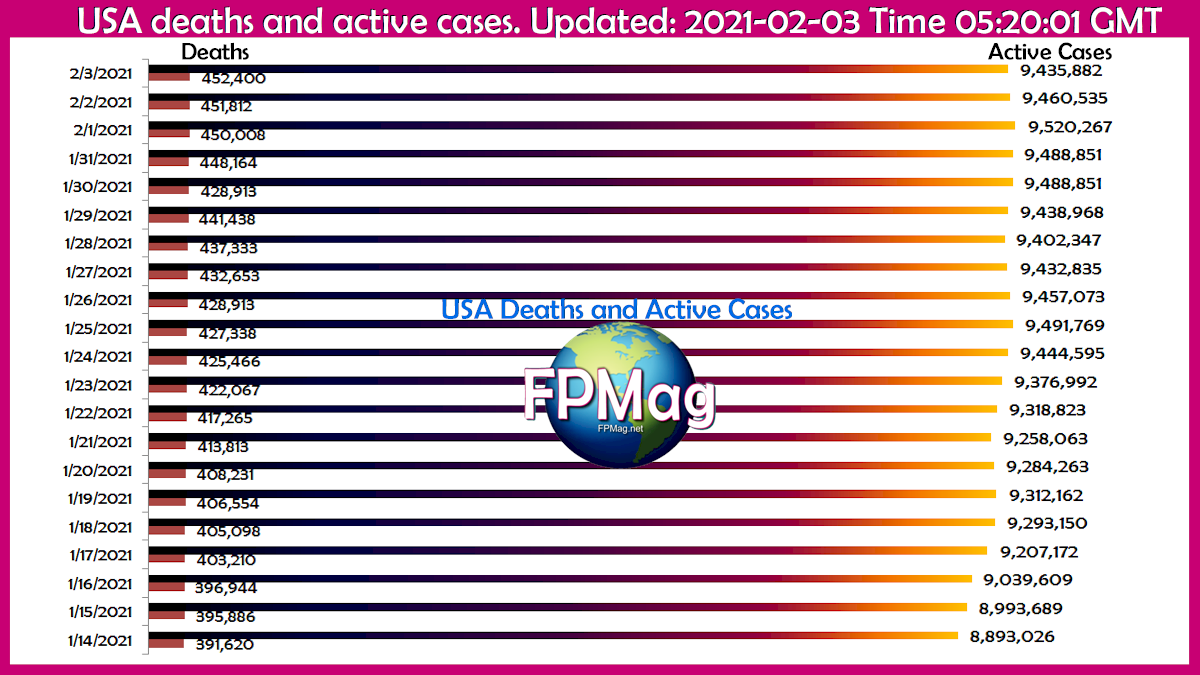