Anti-maskers are the ones violating human rights.

The news stories of anti-maskers in Canada causing public mischief may indicate a message that better public education is needed. A video on Twitter this week gained notoriety showing a large man in BC being arrested by five Canadian Tire security types after allegedly assaulting a store employee at Burnaby, Canadian Tire. The allegedly-assaulted employee had asked the accused to vacate the store or wear a mask if staying.

There’s also a message for government from Kelowna, British Columbia (BC) RCMP. Educating the public on why proper mask wearing is crucial, and encouraging disease prevention would perhaps make the public health guidelines work even better.

Get used to wearing a respirator mask as a way of life.

At some point manufacturers and government agencies will work together and get proper respirator masks into people’s hands to put on their faces having finally explained why and how.

Educating the public has been spotty in Canada including mixed messages from the federal health officials, confusing messages from politicians, and politicization by the former American President who caused the deaths of half a million Americans.

A 36-year-old man allegedly spat in the face of an employee of a convenience store near Seymour and Dunsmuir streets in Vancouver following the provincial government’s 19 November 2020, mask mandates.

A 41-year old woman trespassed in a BC store, assaulted police, resisted police arrest and wound up in court.

“We highly encourage everyone to respect provincial health orders for their safety and the safety of others. The RCMP’s focus remains on educating and encouraging members of the public who may not be following the safety measures set out by public health authorities. Enforcement is typically seen as a last resort, but one that can be used if the circumstances warrant,” said corporal Noseworthy, last November.

Despite these efforts, some public mischief makers seek attention, or in the alternative, may be afflicted with ill mental health caused by the COVID-19 pandemic. This is the concern that urges caution and care.

But once the mischief maker becomes assaultive, law enforcement is needed to prevent self harm and to avert harm to the members of the public and frontline workers like store clerks and cashiers. 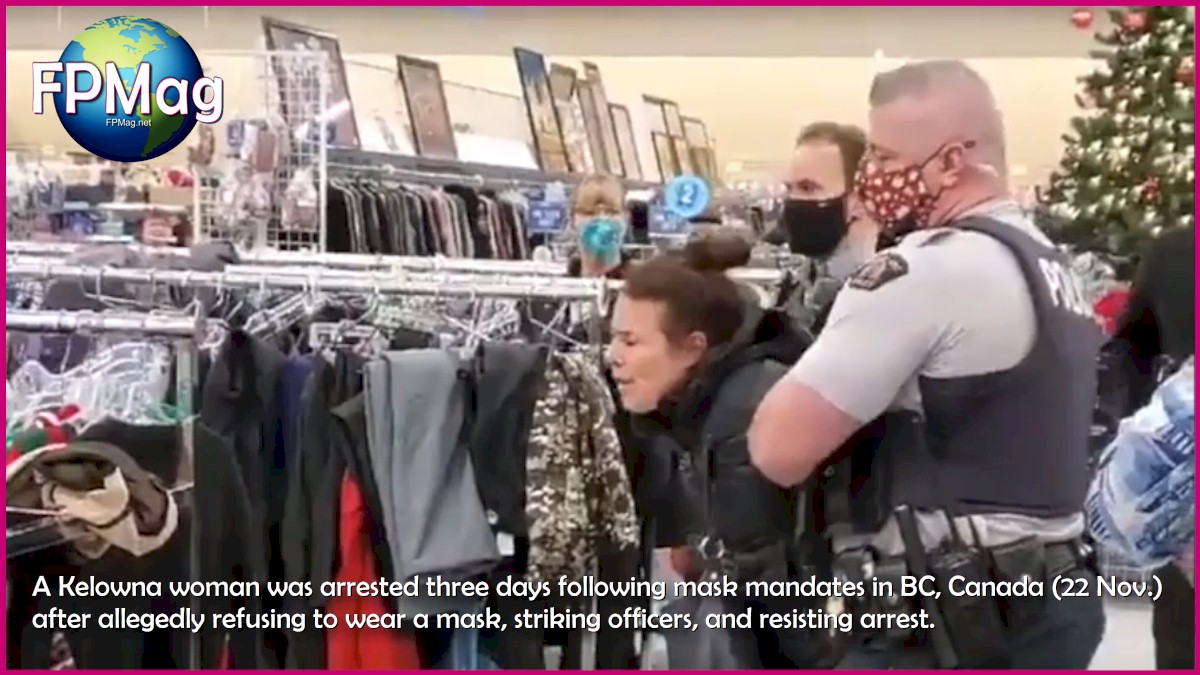 Things have changed in the Americanized part of Canada that is encouraged by some bizarre members of the Canadian Conservative Party.

US President Joe Biden following his first month in office is making ready next week for sending out twenty five million face masks to Americans who are unlikely to be able to buy their own. They will go through health centers and food banks.

“Not all Americans are wearing masks regularly, not all Americans have access, and not all masks are equal,” White House COVID-19 Response Coordinator Jeff Zients said at a press briefing on Wednesday.

“With this action, we are helping to level the playing field, giving vulnerable populations quality, well-fitting masks, he explained.”

Harvard University has put together “A 3-Step Strategy to Support the New U.S. Mask Mandate” and it is extremely good, relying on science and technology to get it done.

Here is why this mask-wearing is important.

In the case of the vaccinated population, those vaccinated persons who become sick with COVID-19, none die and almost none require hospitalization, thanks to their vaccine.

Good quality respirator wearers with fit tested masks don’t get sick, was the recent finding in a health care setting.

Masks must be warn by the vaccinated population in order to stop the pandemic.

What does this tell us? Wearing the best available mask even for those who are vaccinated is indicated if one does not want to get sick. Meanwhile, vaccinated persons getting sick is still possible and infecting others is still possible while they are sick with COVID-19.

Therefore, it is possible that wearing a mask is likely to be mandated all around the world for years to come.

The pollution index has already begun to indicate that necessity in many places already and records indicate that pollution will be getting worse for as long as heavy fossil fuel burning continues.

Reckless People who get sick impact others.

Mask resisters are hurting everyone. Among them are scofflaw attention seekers but more typically, ordinary people, not well-briefed, known as the ‘credulous’ population willing to follow anyone who explains things including wacky conspiracy theorists.

Five Harvard authors, Devabhaktuni Srikrishna, Joseph Buccina, Dan Hanfling, Monica Gandhi, and Donald Milton put together an important brief on how to build a mask mandate and leading the recommendations was an awareness blitz.

“Launch an awareness blitz. To increase the utilization of masks and dispel misinformation, an effective campaign is needed to raise awareness of the mask recommendations. With few exceptions, all people should wear masks consistently when sharing airspace with others from outside their bubble of family, friends, and coworkers. They are not currently doing so.

“In a U.S. national survey we conducted in December, over 85% of the 466 respondents said they were using masks to protect themselves and those around them (consistent with a similar survey by Pew in August), and 80% said they were using their masks at the grocery store. But only 56% said they used one when with people outside their home, only 48% were doing so at work, and just 33% were wearing them when someone visited their homes.” Citing Harvard Business Review

Here is the story of a Canadian who on Monday afternoon, said he believed that he had the right to attend at a Canadian Tire store while violating the store’s published dress code as well as the Province’s Emergency restrictions. One CTS employee said he was punched by the man after he explained that masks were mandatory for the protection of all customers.

According to a BC Premier’s statement, “Provincial restrictions are in place to help stop the spread of COVID-19. Some restrictions are made by the Provincial Health Officer (PHO) under the Public Health Act and others are made under the Emergency Program Act (EPA). Most orders can be enforced by police and compliance and enforcement officials.”

Drama at a Canadian Tire Store in Burnaby, British Columbia began on Monday afternoon as often happens when a trespasser refuses to leave a crowded store after being asked to leave. Usually it’s a drunk, says an experienced guard in Richmond Hill, Ontario, Canada, who wishes not to be named because he is not authorized to speak for his employer.

But in this case in Burnaby, BC, it was a roving anti-masker going from store to store to disturb the peace. This one was de facto ‘arrested’ by store security in an effort to stop a violent rampage and to evict the perpetrator. The trespasser had allegedly slugged store employees as retaliation for their asking him to leave.

According to the 8 February Update on British Columbia COVID-19 Restrictions the emergency public health disease-control law is very clear:

“Masks are required in many indoor public settings and all retail stores.”

* “Do not wear a mask in an indoor public setting, unless you are exempt

* “Engage in abusive or belligerent behaviour”

Under trespass to property statutes, even in common law, once asked to leave private property, regardless of the reason, it is time to go with haste, as in fast.

Video indicates the trespasser was trying to make a point that he could violate the safety rights of all the people in the store if that was to his liking. He would shop in a store without wearing a mask even though the store has a dress code which includes mask wearing and excludes shirtless, barefoot, pant-less, or skinny-dipping attire. It did not work out that way.

The Canadian Tire staff are protecting the genuine customers in the crowded store. Those people have the right to safety of the person and that means everyone wearing a mask to prevent the exhalation of SARS-CoV-2 into the path of another person’s face.

COVID-19 had previously been spreading like wildfire until mask mandates and quarantines came into play in Canada. Then the active cases plummeted.

Wearing personal protective gear is beginning to look like a future necessity if scientists are correct about what lies ahead. CLimate change is killing off species and they are leaving behind some nasty viruses looking for new hosts.

According to a Harvard study report, “The N95 respirator is the best-known high-filtration mask in the United States. (Comparable models in other parts of the world include FFP2 in Europe, KF94 in South Korea, and KN95 in China). In our survey, 13% of respondents reported that they were wearing an N95 or the equivalent. 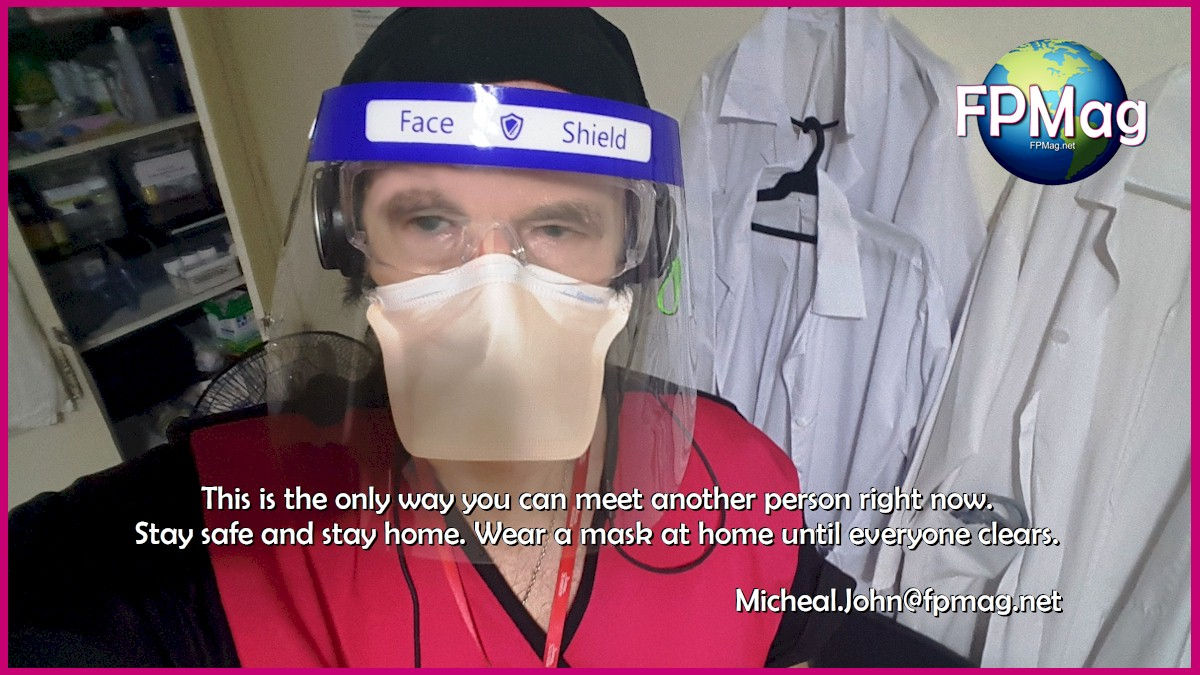 This is how one should go about meeting persons outside their ‘Bubble’ of home occupants. The goggles, shield and respirator combination is an amalgam of all national PPE mandates around the world. Photo Credit: Melissa Hemingway.

Wearing masks for a long time into the future is likely because they work to protect the wearer in varying degrees.

Studies show that there are no incidents of infection among groups of people who wear a respirator Filtering Face Piece (FFP) all the time.