US Miscalculation: Kremlin is compelled to invade US-surrogate-Ukraine or force a treaty with teeth

“If Russia did to America in Cuba what America has done to Russia in Ukraine, there would be a shooting war already,” says analyst.

The North Atlantic Treaty Organization for years has been trying to justify its existence as America drags it illegitimately for a fight, against China, into the Asian Seas. Now NATO has been going way over the top quitting the ABM Treaty; withdrawing from the INF Treaty; and last year pulling out of the Treaty on Open Skies. Now NATO is conducting provocative exercises in the same lanes occupied by Russian warships near the Russian border. The Kremlin has spoken often of Red Lines crossed and is beginning to bolster the support infrastructure of the troops and equipment facing off against NATO on Russia’s side of Ukraine’s border.

President Joseph Biden is slowly walking the human race through a drawn-out Prelude to Global War but Putin, a better statesman,  is unlikely to let things get that far.

As Russia builds atop its already strong military presence of 60-70,000 troops close to the Ukraine border since spring 2021, China is moving forward its readiness for an attack on the island of the Republic of China (Taiwan).

“If America pulls the pin out of this grenade, it will be more than the Americans can handle and more than the world is willing to tolerate,” suggested Mr. Baldock. “Thus America will have no friends besides “BoJo the Clown”.

Using its massive buildup of intermediary range nuclear weapons in Europe and Asia, America hopes to fight in two theatres the enemies it has created in Eastern Europe and in most of Asia.

At some point, Russia, China, Iran, Iraq, North Korea, Syria, Pakistan, and other enemies America has created in Asia over the recent years, will either remain neutral; or join the fracas either as active participants or cooperators with fighting forces against the USA.

Russia is rejecting the American subtle militarization and de facto takeover of Ukraine plus the NATO military exercises on Russia’s  borders.

The US Pentagon is alleged to have deliberately  leaked a document to the Washinton Post claiming that the Kremlin is planning a multi-front offensive as soon as early next year involving up to 175,000 Russian troops.

Prior to this, Vladimir Putin is quoted by Tass as saying about the NATO buildup in the Ukraine and in the Black Sea, that the US and NATO have crossed a red line.

“The emergence of such threats represents a ‘red line’ for us,” Putin said at the end of November.

“I hope that it will not get to that and common sense and responsibility for their own countries and the global community will eventually prevail,” said the Russian leader.

Meanwhile, NATO foreign ministers met in Latvia, a NATO-member which borders Russia, last week. At a press conference, Jens Stoltenberg, the secretary-general of NATO, (see video above) addressed the situation in Ukraine from a US-prepared script he read with apparent difficulty.

On Saturday it became clear that the two leaders, Joe Biden and Vladimir Putin will have a secure video conference on Tuesday 7 December 2021. 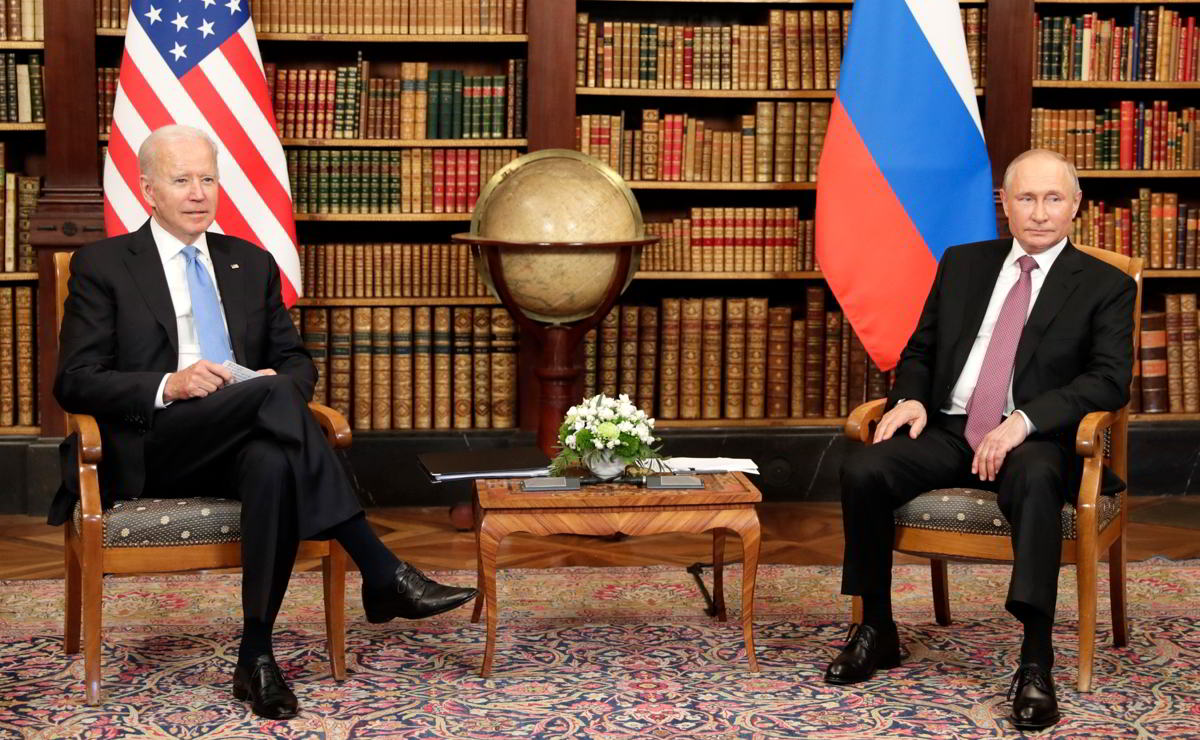 Vladimir Putin is angling for an Eastern Europe Treaty that has some teeth in its promise of respecting the security and safety of the people of the Russian Federation. By Kremlin.ru, CC BY 4.0, Link

“The leaders will discuss a range of topics in the U.S.-Russia relationship, including strategic stability, cyber, and regional issues,” according to a statement by Press Secretary Jen Psaki released on Saturday.

💬@RusEmbUSA to @FinancialTimes:
Russia is not a threat to any country. The deployment of 🇷🇺 troops on the national territory is our sovereign right and no one’s business.

“America plans to fight a bigger war with Russia from the Ukraine’s territory just like it is planning to do from Australia against China,” says, Tanya a RINJ Women worker in Kiev, Ukraine. “We are very worried about this and have no hope of surviving.”

“Numerous cyber security experts in Israel say that America is already fighting a cyber war against Russia from near its borders in the Ukraine. The cryptic threats against Russia made by America’s peculiar Secretary of State Blinkin and even more peculiar US President Joe Biden, are in fact a threat of destroying Russia’s infrastructure from the other side of the Ukraine border,” says Simon Baldock, an Israeli security analyst.

“If Russia did to America in Cuba what America has done to Russia in Ukraine, there would be a shooting war already, started by America in protest against having an enemy near its border. The hypocrisy of this issue is written all over Jens Stoltenberg’s face as he reads a prepared text, threatening Russia, claiming he is backed by America and the military of 30 NATO countries hence Russia can do nothing about that. Probably Russia will do something about that. And it will be a legacy move by Vladimir Putin that will swallow Joe Biden’s presidency,” says Mr. Baldock with some sarcasm.

Svetlana, a feminist activist in a similar role with RINJ Women since 2009 in a suburb of Moscow, says that, “the people of Russia are very much against any kind of military involvement with the Ukraine and wish that all fighting in the Donbass border regions would stop and people start getting along. Those who want to be with Russia should be with Russia and those who don’t must stop threatening us. But if Vladimir Putin can get rid of the nuclear weapons America is pointing to us in our homes since USA broke the INF treaty, then the President must do that thing. We know there are a lot of troops [deployed] because family members are there.”

The Ukraine has been for years an unstable corrupt business and military satellite of the United States.

America’s enormous military involvement on Russia’s border means that Russia has been compelled by self-defence imperatives for decades to take strident action including the attempted repulsion of American fighting forces from its borders, especially since the United States withdrew from the 1987 intermediate nuclear forces (INF) treaty.

In numerous regions near the Russian border, lived Russians who had been annexed by the Ukraine and part of a legacy of conflict between Russia and Ukraine.

A 2010-2011 survey of public opinion reported that a third of the people in the Ukraine paid bribes when dealing with public services and the main institutions including the judiciary, parliament, political parties, law enforcement, and public officials.

In September 2021, the Biden family reciprocated its history of suspected influence peddling for lucrative payoffs by concluding a Strategic Military Alliance with the Ukraine, following many months of loading American weaponry into the country.

Peter Schweizer in his book, “Secret Empires: How the American Political Class Hides Corruption and Enriches Family and Friends,” gives a lot of colour to the complaints made by the former US administration about the incoming Biden team.

“President Donald Trump’s children have made front pages across the world for their dicey transactions. However, the media has barely looked into questionable deals made by those close to Barack Obama, Joe Biden, John Kerry, Mitch McConnell, and lesser-known politicians who have been in the game longer.

“In many parts of the world, the children of powerful political figures go into business and profit handsomely, not necessarily because they are good at it, but because people want to curry favor with their influential parents. This is a relatively new phenomenon in the United States. But for relatives of some prominent political families, we may already be talking about hundreds of millions of dollars,” writes Amazon book reviewers.

“One might conclude that America’s complicated engagements in Ukraine to enrich family and friends has led to a very dangerous place. While American officials are now tied  as gatekeepers to the Ukraine, trying to make certain that the stories of their escapades do not escape to the light of day, those same leaders are now bound to Ukraine to offer the mechanics of the USA for the safety of Ukraine. If Russia takes Ukraine, Russia will learn and expose far too many dark secrets,” says Mr. Baldock.

Rapid Escalation of the conflict in 2014 has lessons for today. 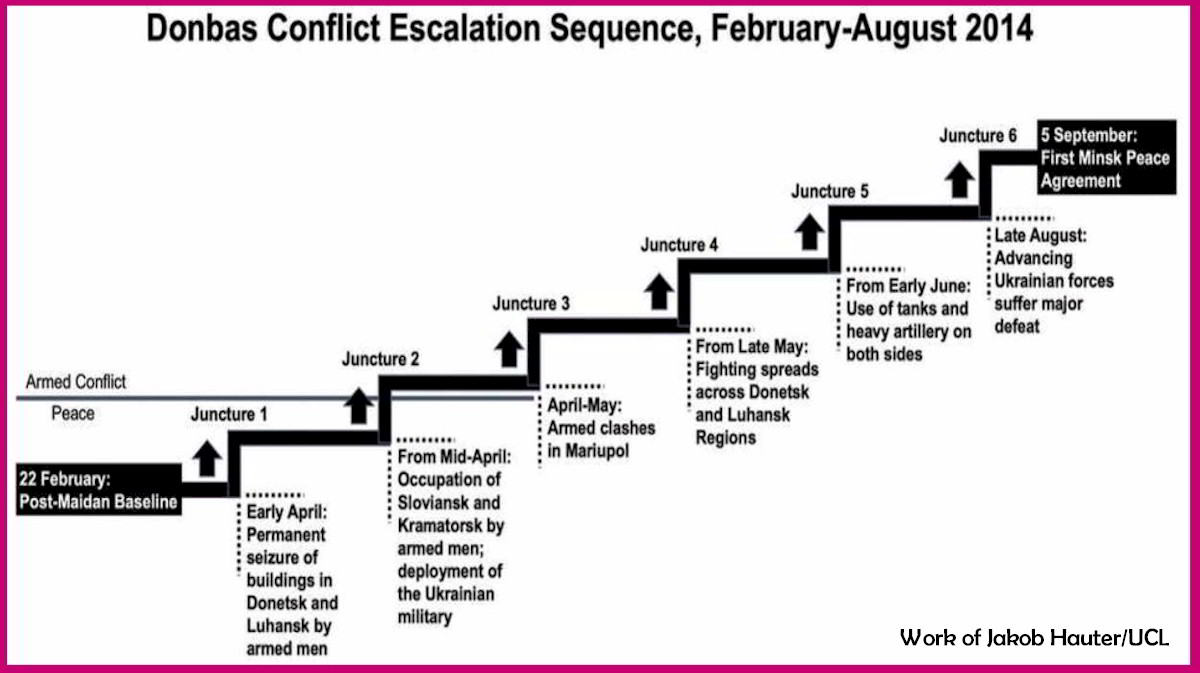 Six steps to a conflict: Ukraine, February to August 2014.
Jakob Hauter/UCL
Read if you wish:
Ukraine: rapid escalation of conflict in 2014 has lessons for today.

The article " US Miscalculation: Kremlin is compelled to invade US-surrogate-Ukraine or force a treaty with teeth " was written by Author: Micheal John OBrien (Biography, Email) Editor in Chief
Contact Micheal John OBrien on Twitter ~ Facebook ~ LinkedIn ~ Instagram ~ Find on Wikipedia ~ Find on YouTube