Let’s talk about American politicians and jurists making laws about women’s bodies. It’s the story of the completely misguided American concept of the value of human life and the American ruling patriarch’s God-complex. 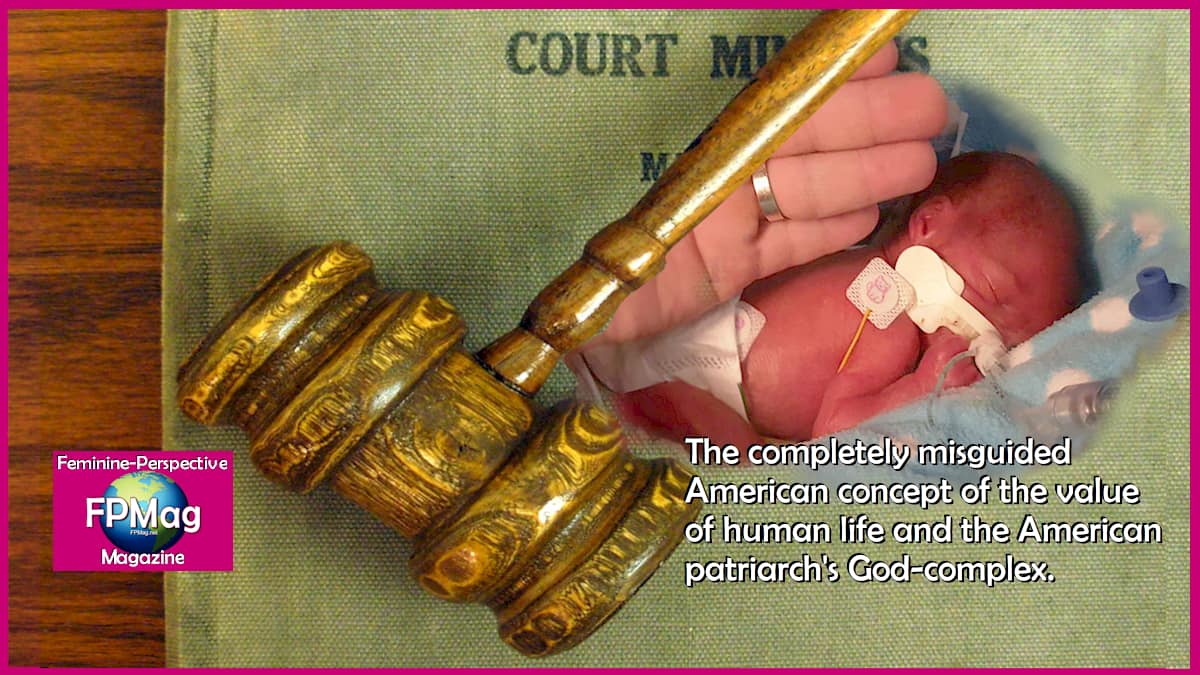 The completely misguided American concept of the value of human life and the American patriarch’s God-complex need some self-observation and some deep, honest thinking. Art/Cropping/Enhancement: Rosa Yamamoto FPMag

The human reproduction system, with the help of the patient’s genuine medical doctor, might terminate a life where biological data insist an imminent or eventual failure of the hosted or host life, or both, are indicated during the pregnancy.

This medical procedure cannot be done by politicians and jurists for every single case but only one by one based on the extraordinary circumstance, only with the advice and skill of the physician and only in the fractions of seconds, minutes or hours when the decision must be made. Impossible. That is why this medical procedure can only be decided based on real-life indications by a medical practitioner in consultation with her patient.

In other words, what US politicians and jurists are trying to do is impossible; a violation of fundamental human rights; and a despicable manifestation of widespread misogyny.

Women who loudly oppose the male imposition of dictatorial mandates over the uterus are not rabid baby-killers. Most have never suffered through that choice. They simply oppose losing control of their own bodies.

Once a baby is in the womb, there are two humans. A pregnant woman knows and feels that reality, not the governor of Texas or Mississippi. No human has the right to randomly take a life. Women know and abide that instinctively.

Tragically, second trimester surgical abortions are performed as a management response to a late miscarriage due to fetal irregularities that indicate a failed pregnancy. Such surgical dilation and evacuation abortions are also performed in post-triage as a response to  maternal health contraindications to the pregnancy. This is sometimes a medical procedure to prevent maternal death which could cost other children their mother. There is no time to waste checking rules imposed by foolish politicians. Doctors save the lives they can save. At this time, however, a live fetus has developed the will to live and will protest with certain survival instincts his or her death. Doctors who have performed these abortions have a litany of stories to tell. Think hard on this.

That the Supreme Court in the United States tosses decisions back and forth with State politicians and Courts about who can live and who may not; who can kill and who can not; is a symptom of a God-Complex and America’s malignant core evil.

America is a murderous collective says the data on homicides.

“RINJ Women adduce that “American cult ideology in which human rights to life beyond ruling-class Americans, don’t exist, has led to a tolerance for homicide.

“The culture of murder is so strong in the United States that Senators and their supporters are insisting that the Russian people be nuclear bombed.

“Human life is devalued as nearly 100 gun deaths and over 1000 COVID-19 deaths every day are just statistics with no face, no consideration, few masks and few vaccinations. Americans do not value each other’s lives.

“In that murderous context, some American women are using abortion as a method of birth control and unequivocally, by any definition, this is murder,”  says Katie Alsop of The RINJ Foundation which argues that induced abortion is a decision only a patient and doctor can make based on true medical indications and not patriarchal cult doctrine.”

At no point in human reproduction process is intervention required by high-and-mighty politicians or jurists.

As adults the developed human starts applying what they may have ‘learned’, if anything, or become a reproduction system or sperm donor to try and create a new human that will amount to a contributing part of the human community. Everyone has a purpose?

Women’s reproductive systems are not a haphazard biological machine that needs patriarchal interference.

Human sexual reproduction is a systemic process evolved probably over thousands of centuries and enormously effective, very precise. Were that not true, the reader and writer here, would not exist.

Review human reproduction, the process of growing one human inside another human.

Once a fertilized ovum is embedded into the wall of the women’s uterus, a human being is in the creation process and a life has begun, unequivocally. There is now an 80% chance that the pregnancy will go to full term.

Until this embedding event, the human body has had time, often several days, as many as 11, to examine the nature of the fertilization and to detect with a cynical database of reject criteria any union that looks like a chromosome mismatch or other contraindication to beginning a pregnancy, the creation of a human life.

By the 11th day after fertilization, the ovum has completely embedded itself into the endometrium. This developing child and the placenta will in most cases remain implanted in the human uterus for nine months.

Most connections between spermatozoa and ovum, in a huge majority, scientists believe, are rejections. Sometimes the accept/reject process is so strident, couples have a difficult time conceiving a baby, and may never. There are many reasons for that.

Once the fertilized egg is embedded, that is not the end of the human reproduction systems’ over-watch to protect the child and to detect any contraindications to pregnancy that may arise. There is also another factor, the fragility of the incipient fetus within the woman’s reproduction system is high. In the event of a failure to continue the pregnancy for any reason, women report or may not know, they had, in general terms, a ‘miscarriage’. There are many reasons for that. Sometimes a miscarriage manifests as a heavier than usual menstruation at the usual time. Other such events may be a surprising and uncomfortable series of pain and excretion, even maybe a dangerous event approaching the 20th week. Most miscarriages happen if the over-watching reproduction system detects that the fetus is not progressing as it should according to the reproductive systems’ blueprint which is a bio-computational database. 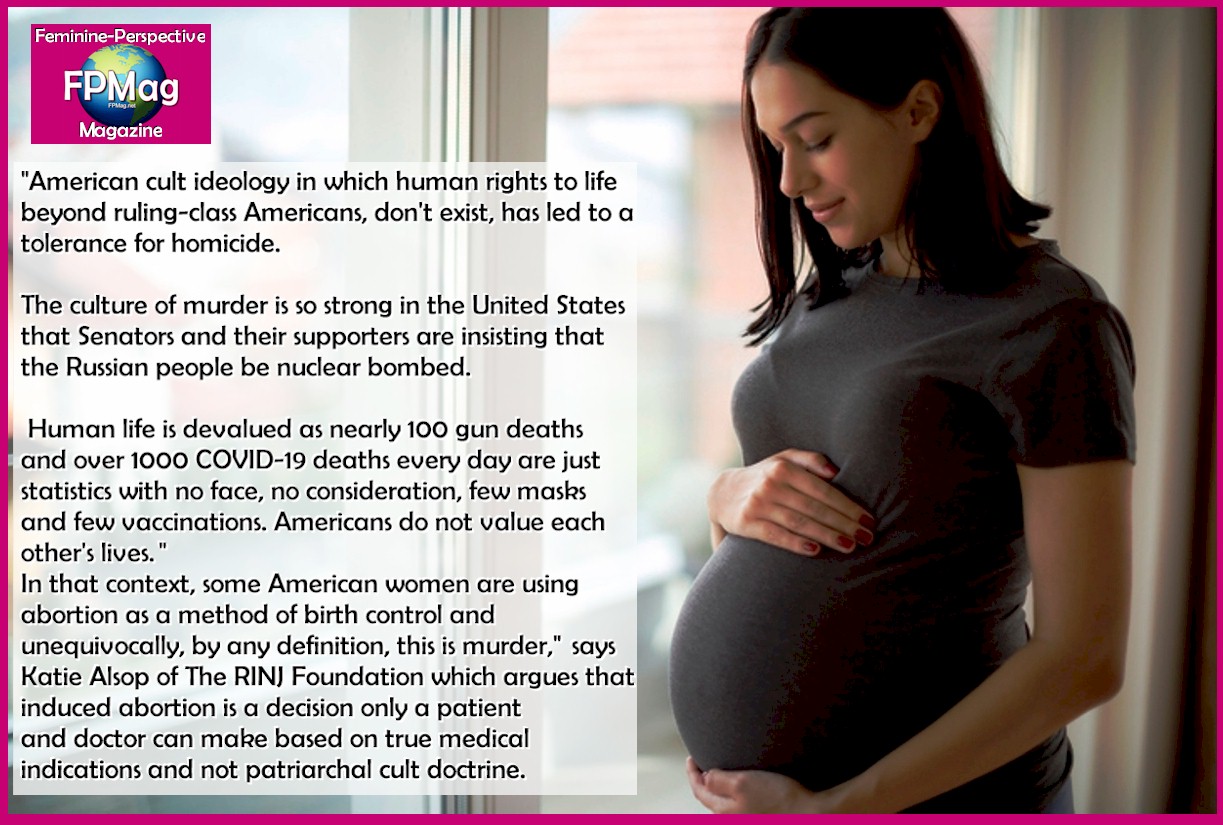 “American cult ideology in which human rights to life beyond ruling-class Americans, don’t exist, has led to a tolerance for homicide. The culture of murder is so strong in the United States that Senators and their supporters are insisting that the Russian people be nuclear bombed.
“Human life is devalued as nearly 100 gun deaths and over 1000 COVID-19 deaths every day are just statistics with no face, no consideration, few masks and few vaccinations. Americans do not value each other’s lives. In that murderous culture, some American women are using abortion as a method of birth control and unequivocally, by any definition, this is murder,”  says Katie Alsop of The RINJ Foundation which argues that induced abortion is a decision only a patient and doctor can make based on true medical indications and not patriarchal cult doctrine.” Photo Credit: USA Centers for Disease Control.  Art/Cropping/Enhancement: Rosa Yamamoto FPMag

Between ten and twenty percent of this stage, before twenty weeks, fail in what is termed a miscarriage.

How do RINJ Women deal with unwanted Pregnancies from rape

That is entirely between the patient and her practitioner and we do not discuss that private matter other than to say that regular counselling is often the most active solution.

In the case of children made pregnant during  of rape or incest, we do everything possible to prevent endometrium embedding. Past that, abortion in children of children is high risk because of numerous indications among children plus the life-long trauma. Children generally cannot carry a baby to a natural delivery. They are too small.

If we get the child survivor of rape or incest late, we try to house the pregnant child-mother until 26 to 36 weeks depending on the health, size and development of the child and the progress of the pregnancy. The big issue is delivery. Children are usually too small to deliver a baby.

At twenty six weeks, a baby can fit snugly, curled up in the palm of my hand. We would never do a C-section at 26 weeks unless there was a desperate emergency.

The lungs of the child are barely formed at this time and even though the neo-natal survivability is quite high at this age, about 85% likely-survival, it is a risk one never takes by choice.

Somewhere up to 36 weeks, looking at the baby and the mother, and one more factor, the adoptive parent’s circumstance, some decisions must be reached.

There is one more factor. Some kids mature during pregnancy and whereas they may not have been candidates for delivering a baby at the start of the pregnancy, after nine months, there may be no longer an issue. That’s why housing and daily medical supervision is our mantra.

The kids continue their schooling and are given other developmental activities depending on their selected career path. Often it is a matter of regular medical supervision ,counselling and the counsellor’s reported indications.

RINJ clinics and shelter staff do not encourage children to keep their babies. If the child-mother’s parents want to raise the child, and if they qualify within the jurisdiction’s rules, or our rules in the alternative if there are otherwise none,  the parents  of the child-mom must adopt and accept full responsibility. As the caregivers, these adoptive parents can assign some responsibilities to the child-mother, and of course breast feeding is high on that list, if possible. Many kids do not lactate, however, believe it or not, they are often that young.

Nature offers many miracles. The birth of a baby is one of those miracles.

Rape and incest are crimes the human society must end. Politicians and jurists are not doing their jobs in that regard. Maybe they are too focussed on controlling and defeating women to be too hard on rapists? That needs to change no matter thee excuse for the failure of America to end rape and incest.

A note about Guest Editorials