Lie of the century: Blaming Biden for USA COVID19 flop

COVID-19 is an American catastrophe killing nearly a million, true, but not because of Joe Biden who has saved countless lives with his massive and aggressive vaccination campaigns. Vaccines work.

FPMag asked the tracking team in Singapore for Civil Society Partners against COVID-19 to look at the USA data in 2020 and then compare the real world circumstance to 2021 and answer the question, “Which President did a better job fighting COVID-19?”

Why would scientists want to do that? Because the spin doctors at Fox News and within the US Republican Party have been telling their country and the world that Joe Biden failed on the COVID-19 management front and Donald Trump was a hero. President Biden promotes vaccination and President Trump promoted unmitigated quackery.

The latter subculture must be re-educated because there will be more pandemics.

The answer: The Biden Administration worked miracles saving lives in America after Donald Trump turned the COVID-19 crisis into a runaway asteroid causing an unstoppable tsunami of disaster across the United States. America may not get over this. But thanks to Joe Biden, it will get past the SARS2 pandemic.

“The disastrous 2020 COVID-19 trend line has been flattened by the Biden administration since 2020. Despite enormously worse variants the Case Fatality Rate was dropped in 2021 to three-quarters of what it was on average in 2020,” say researchers.

In all quadrants, the SARS-CoV-2 ancestral virus of 2020 was a pussy cat compared to the monsters that emerged in 2021.

One thing biostatisticians and infectious disease researchers know about the COVID-19 pandemic is that the first countries to grab the bull by the horns and fight this thing with massive testing and contact tracing would contain the thing.

Three example countries that achieved control over disease spread rapidly from the outset are China, Taiwan and New Zealand. Other nations have fought well but it was with explosive response to the crisis that Tsai Ing-wen (Taiwan), Jacinda Ardern (New Zealand), and Xi Jinping (China), without the slightest hesitancy, slammed down on this SARS2 ‘bug’.

The number one worst failure on planet Earth, the man who killed more Americans than any entire country in war, was Donald Trump and his bizarre quackery and disdain for science.

Donald Trump did exactly the worst possible betrayal of the people of the United States. Instead of building up testing and contact tracing in January 2020, he continued his personal scams and BS according to Michael Cohen, his personal lawyer.

“Trump created a cult of doubters and anti-science quacks in a dangerous subculture that will live for years to come, already propelling America into a coronavirus hole it cannot seem to get out from,”  explains Dr. Fred Harris, a biostatistician and infectious disease researcher with the Civil Society Partners against COVID-19 tracking team in Singapore.

“The thing that blows my mind,” said Dr. Harris in a teleconference, ” is that Trump, while bragging he bought the vaccines with 18 billions of USD, he proceeded to encourage quackery COVID-19 solutions and discourage the use of vaccines. Trump played into the long-established anti-vaccine movement to build supporters for his repugnant 2020 election campaign. He set in screaming motion what would be the worst man-made disaster to ever send a Tsunami of slaughter across a nation,” said Dr. Harris.

“Today, Trump supporters say they will never get the COVID-19 vaccines, and I think they face horrible sickness and even death in the current Omicron surge if they are vulnerable persons, which most Americans on average appear to be if one includes obesity, diabetes, hypertensive heart disease, and COPD as comorbid underlying risks to Omicron…” added Dr. Harris

“Clearly even God could not stop this unstoppable gun-toting, anti-masking, anti-vaccine, anti-doctor bunch of Trumpster lunatics punching out nurses, threatening to kill Governor Gretchen Whitmer, and storming the USA Capitol Building to overturn an election,” quipped Monique Deslauriers, an American nurse practitioner and a US director of the global women’s group, RINJ Women. 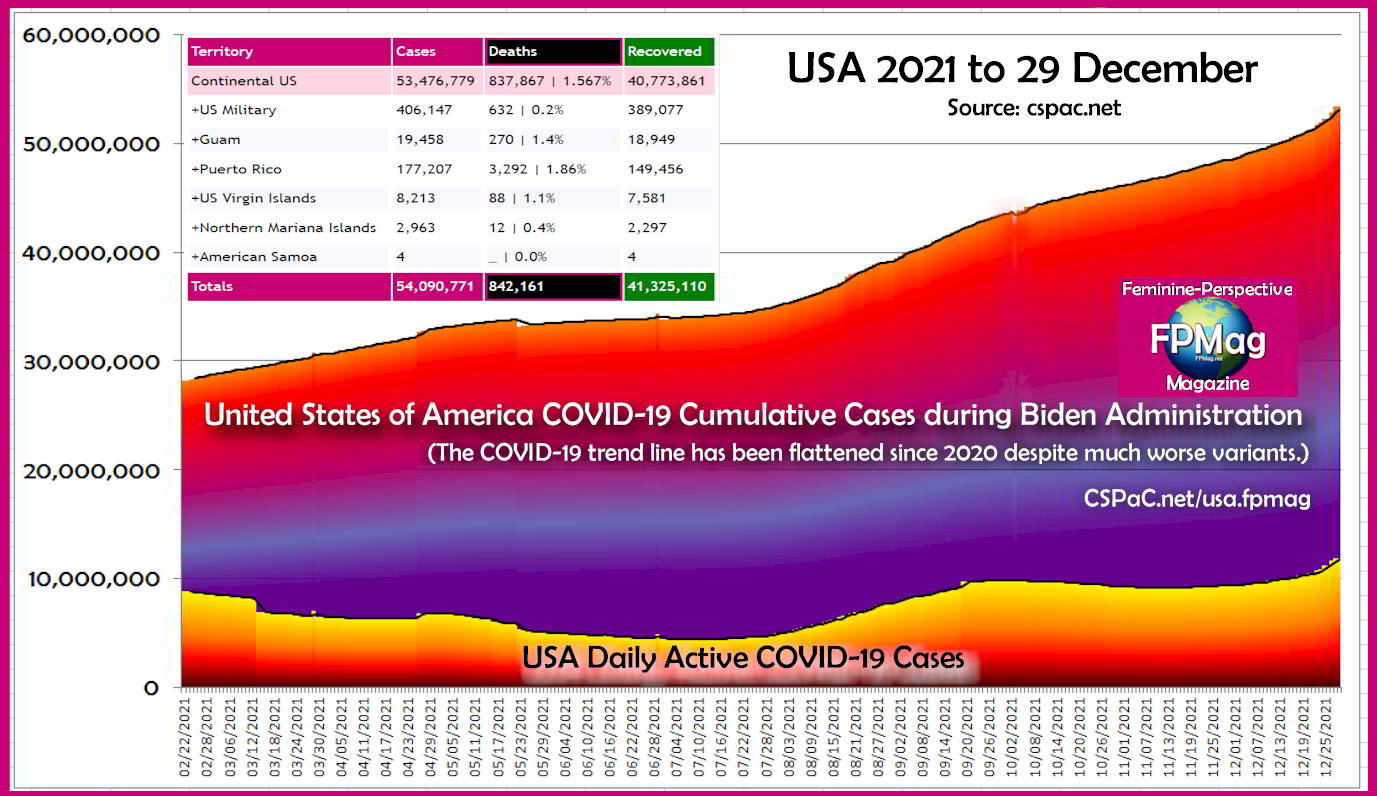 FPMag asked the tracking team in Singapore for Civil Society Partners against COVID-19 to look at the USA data in 2020 and then compare the real world circumstance to 2021 and answer the question, “Which President did a better job fighting COVID-19?” Why would scientists want to do that? Because the spin doctors at Fox News and within the GoP have been telling the country and the world that Joe Biden failed on the COVID-19 management front True or False? The answer, Biden Administration worked miracles saving lives in America after Donald Trump set the COVID-19 crisis into a runaway asteroid causing a tsunami of disaster. Graph: CSPAC.net 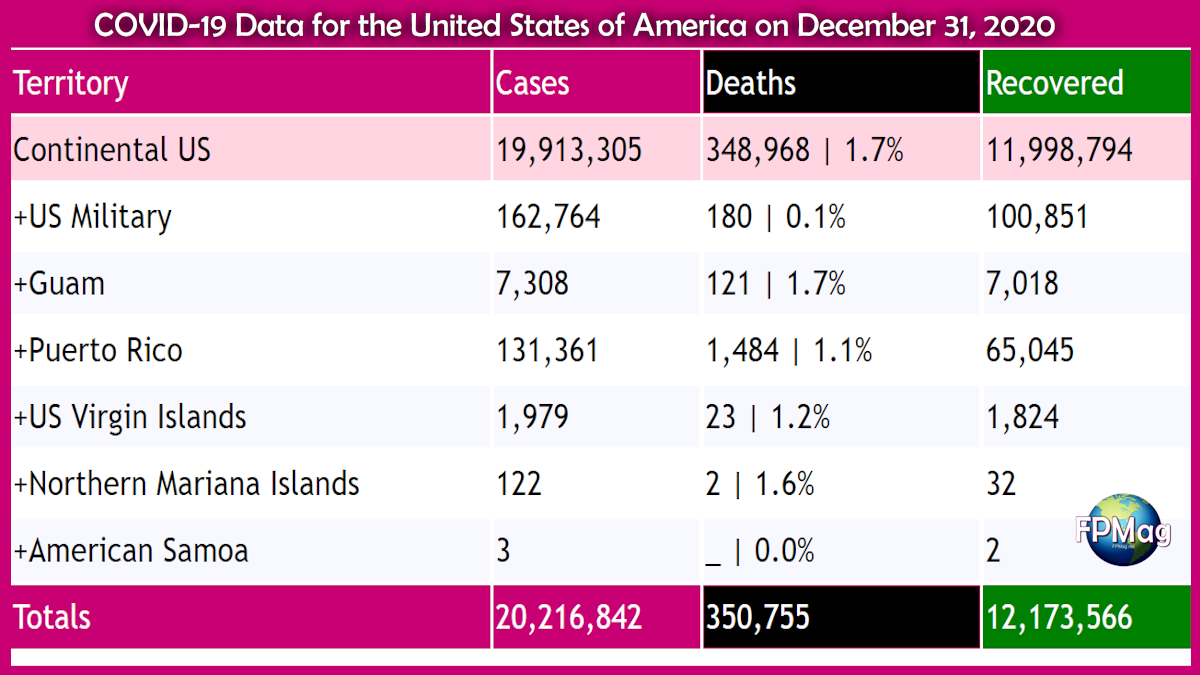 Worried officials from a global women’s rights group were asking if Donald Trump’s Tweet shown here is a danger to the Michigan governor. Seen by a RINJ worker at Thursday, 9 October, 9:30am (Beijing time GMT +8) as Americans were going to bed, the women raised an alarm as Trump’s militia continued storming the Governor’s offices in Michigan. 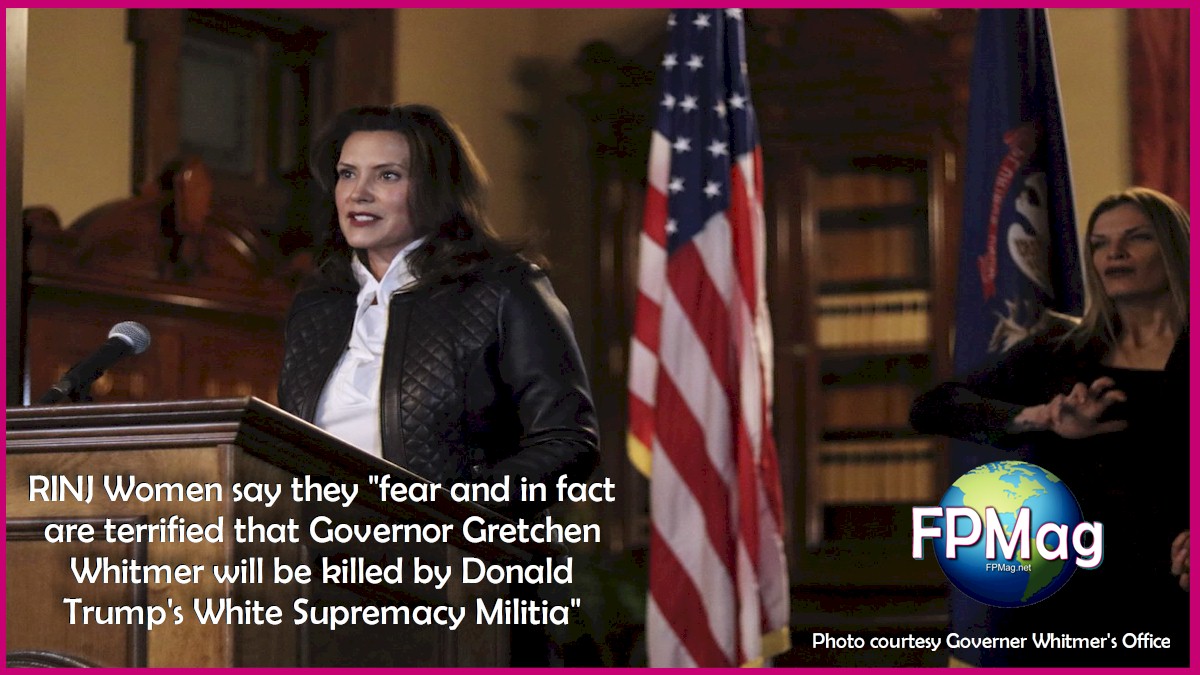 People “feared for her life, and in fact are terrified that Governor Gretchen Whitmer will be killed by Donald Trump’s White Supremacy Illegal Militia,” said Monique Deslauriers, a women’s rights activist in the United States.  Photo courtesy Governor Whitmer’s Office

One could add to that lie of the century, one more lie. Guess who is the liar?

“Donald Trump was responsible for the USA vaccine development” is a fat lie.

Honestly, Americans are generally renown for being so full of unverified boasts that most people gloss over the American news—run from it, even to avoid blood boiling like when they say they invented nuclear reaction, and democracy.

It’s even more peculiar that Americans claim the Pfizer COVID-19 vaccine was invented in the United States. It wasn’t. It comes from Germany. Actually, if the full truth be told, it was a woman in Germany a true Sheroe who invented the mRNA technology and it was also her who aggressively, with love, created the SARS-CoV-2 pediatric vaccine.

It began in December 2019, when a man and a woman in Germany, the two people in the center of the picture below,  perked up when they heard about the NCOV-19 virus in China. They knew all about coronaviruses. A similar bug had been creeping out medics, doctors and nurses for about a decade from Laos to Thailand.

This twosome team of scientists had been developing numerous mRNA technology advances over a period of roughly 20 years, exploring ways to fight cancer and to fight other pathogenic cells, like nasty viruses.

By the end of January the real heroes had the beginnings of BioNTech – BNT162b2 mRNA vaccine  and told Pfizer about their idea. Pfizer said ‘no way an mRNA tech vaccine will work’. 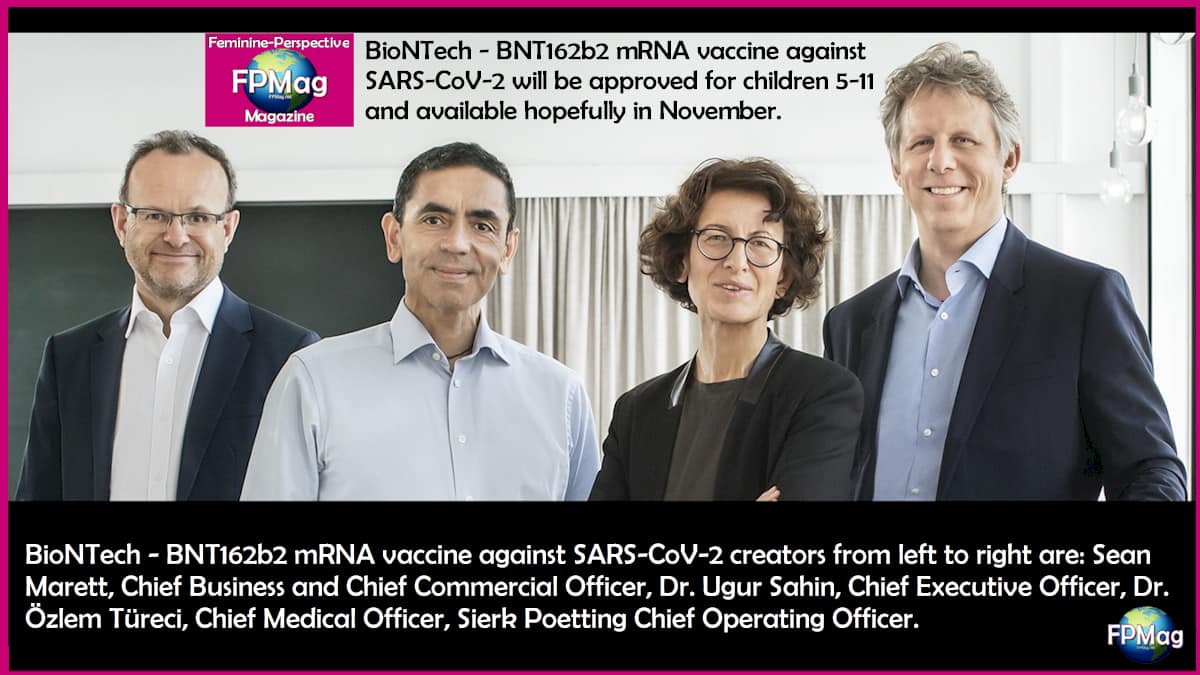 “Messenger RNA (mRNA) is a single-stranded RNA molecule that is complementary to one of the DNA strands of a gene. The mRNA is an RNA version of the gene that leaves the cell nucleus and moves to the cytoplasm where proteins are made. During protein synthesis, an organelle called a ribosome moves along the mRNA, reads its base sequence, and uses the genetic code to translate each three-base triplet, or codon, into its corresponding amino acid.” Citing: National Human Genome Research Institute 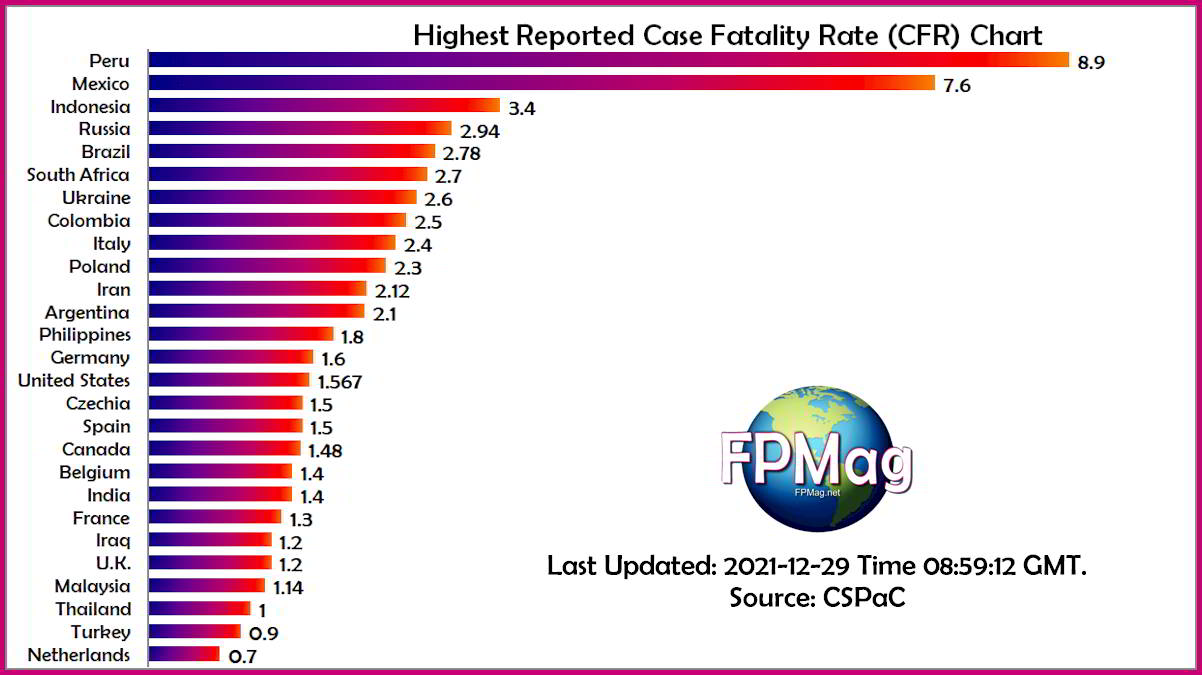