“I was impressed at Justin Trudeau who instead of getting angry, gently with  empathy commented on the ‘things going wrong in people’s lives’, pushing them to become a violent group of anti-mask and anti-vaccine rioters in Bolton, Ontario,” says Amanda Miles, a Mississauga nurse.

Ms. Miles had attended a rally in Bolton on the weekend with her grandmother who lives in the largely conservative Bolton, Ontario, Canada farming community. She said her grandmother first met the current Prime Minister when he was a small boy, with his dad, Pierre Trudeau, the 15th prime minister of Canada. This was to be a momentous occasion but it erupted in antivaxxer violence.

“USA-style right wing conservative anti-maskers and anti-vaxxers became violent at Canadian Prime Minister’s rally in mostly misogynistic redneck town of Bolton Ontario. The event was cancelled to protect attendees,” notes one attendee who fled to her car with her grandmother and locked the doors for safety concerns.

“Justin Trudeau made this nice speech about our hard times, in Brampton [Ontario, Canada] during a bus tour, following the racial slurs and misogynistic attacks, around 5PM Saturday, in Bolton. The attacks were partly against RCMP officers—I presume they were RCMP—all because the mob wants people to stop getting vaccinated and stop wearing masks. The cops were wearing masks, of course. That’s what the rioters’  signs said and what they were screaming,” noted Ms. Miles.

“I never heard so many cringeworthy swear words and racial slurs in my life. I had taken my grandma to this hotel event because she lives near and she had met the Prime Minister’s dad, Prime Minister Pierre Trudeau, many years before I was even born. Grandma met Justin when he was a little boy.  She also met his other brother who died in an accident, and the boys’ mother. Grandma really wanted to go. She became very, very upset at these people and started to run away. I took her to my car. Grandma now wants to move to Mississauga, something my dad has urged her to do for years, so something good came of all this, in a strange way.”

“As a nurse with a masters in nursing degree I cannot agree with the crazy anti-medical-science nonsense coming from the anti-vaxxers and anti-maskers but I do agree with the PM who says recent times have been tough and people are getting a bit stressed.”

Ms. Miles said that she was told by volunteers in Bolton that the RCMP police detail guarding the Prime Minister and the Canadian province’s Ontario Provincial Police urged calling off an election rally in Bolton, Ontario for the safety of the people there.

Protestors were becoming increasingly violent about their anti vaccination goals and anti-masking wishes. “They say they want people to stop getting vaccinated and stop wearing masks on the basis of a human rights issue, if I understood their racial slurs and misogynistic attacks against the women who were present,” said nurse Miles.

“We have been through a crisis—we are continuing to go through a crisis—and we need to listen to each other and lean on each other,” Canadian Prime Minister Justin Trudeau said following a rally being taken over by an anti-mask and anti-vaccine near riot in a strongly Conservative voting region of southern Ontario.Trudeau has been seeking a majority mandate to fight the COVID-19 Pandemic by calling an election for 20 September. Currently the Canadian Prime Minister leads a minority Liberal government.

“Science tells us that the best way to get through this pandemic is to get vaccinated,” the Prime Minister also said. 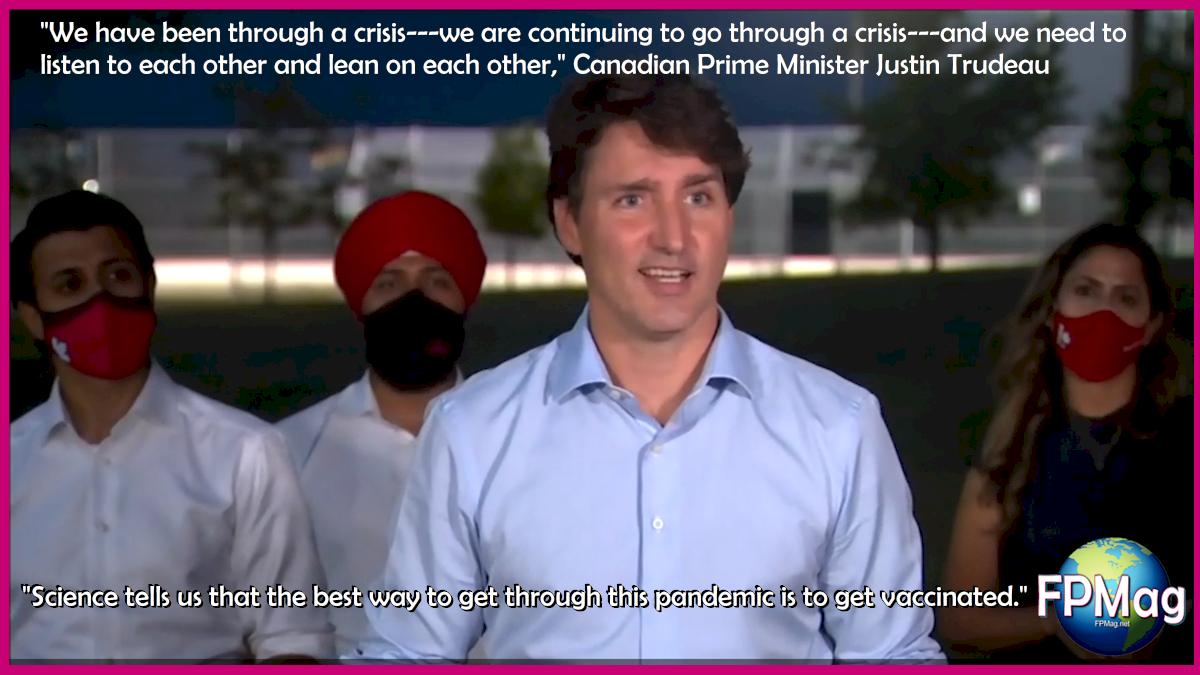 28 August 5:00 PM event on Bolton, Ontario Canada cancelled. “Justin Trudeau kindly commented on the ‘things going on in people’s lives’ pushing them to become a violent group of anti-mask and anti-vaccine rioters in Bolton, Ontario,” says Amanda Miles, a Mississauga nurse who attended a rally in Bolton on the weekend with her grandmother who lives in the largely Conservative Bolton farming area. The province’s Ontario Provincial Police urged calling off an election rally in Bolton, Ontario for the safety of the people there. Protestors were getting violent about their anti vaccination goals and anti-masking wishes. “They say they want people to stop getting vaccinated and stop wearing masks on the basis of a human rights issue, if I understood their racial slurs and misogynistic attacks against the women who were present,” she said. Photo Credit: Screen capture of a live feed from Brampton Ontario this weekend. Art/Cropping/Enhancement: Rosa Yamamoto FPMag

“Canada has been experiencing a rather unusual fourth wave in which infection rates are ramping up but outcomes are less severe owing to the high vaccination rate the Canadian government has been able to achieve,” says Dr. Fred Harris, a biostatistician and infectious disease researcher leading a SARS-CoV-2 tracking (CSPaC) team in Singapore.

“We are not yet seeing high death rates in this wave in Canada. The surge began at the end of July, but it is early yet. The only way to curtail this from becoming a deadly fourth wave is to mandate mask wearing–and I mean N95 respirators–and increase the vaccination levels upwards past 90%. Otherwise a lot of Canadians are going to die this year and next year and keep the pandemic rolling for years to come. Meanwhile unvaccinated Canadians are risking the evolution of yet another Variant of Concern that could escape vaccine-induced antibodies and T-cell resistance,” Dr. Harris explained in a brief Zoom call.

“Among the provinces doing poorly in the fight against SARS2 is Ontario, especially the Peel region, where this anti-vaccine disturbance took place. Then there is  Alberta, and British Colombia. The worst small region in the entire country looks like the small one where the anti-vaxxers were attacking the Prime minister. It has had over 3300 hospitalizations and nearly 950 deaths from COVID-19 in Canada. 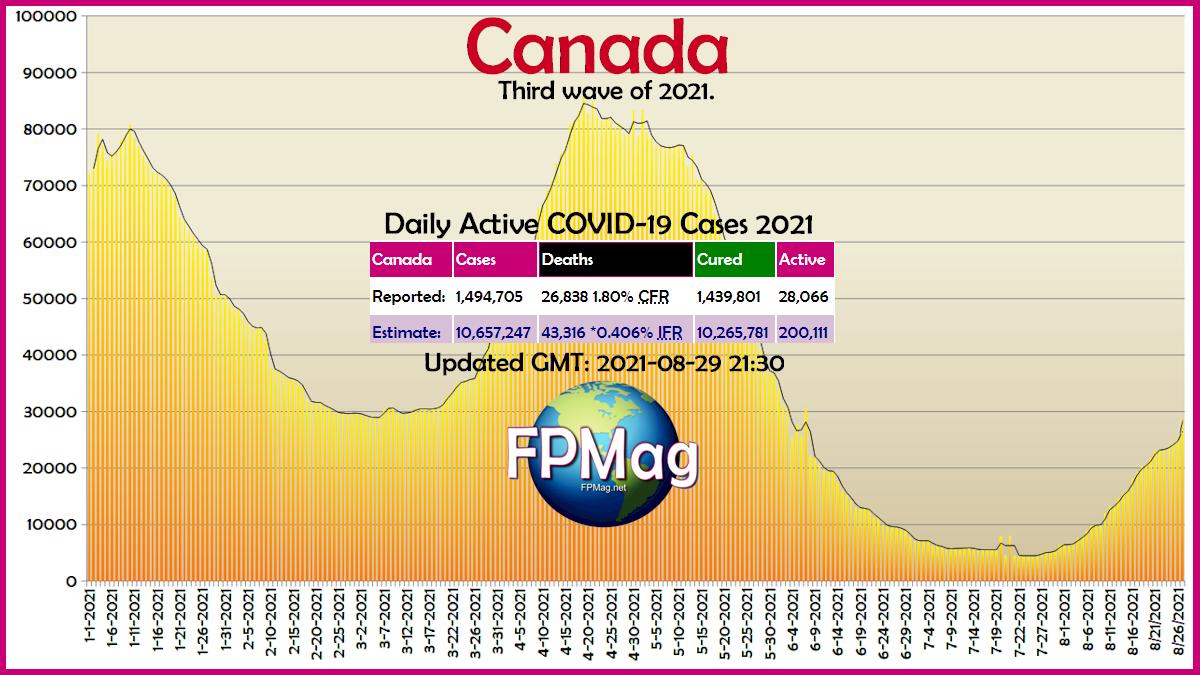 The IHME estimates 44,241 excess deaths in Canada caused by COVID-19, based on the current projection scenario by 1 December 2021, and urges unvaccinated Canadians to get vaccinated against COVID-19.  Graph and data Source: Civil Society Partners against COVID-19

Trudeau campaigns for a majority mandate to fight COVID-19 with masks and vaccines together. These are the numbers for June 29, 2022 COVID-19 Infections in Canadian Provinces