USA COVID-19 CFR stays down thanks to Biden vaccination campaign

Since 18 August the USA averaged 1,229 COVID-19 deaths a day* in a 4th wave that would have been much worse if not for vaccinations being at 55%. Vaccination levels in the USA need to go higher says every single doctor FPMag could reach.

According to several biostatistician sources, while the COVID-19 Case Fatality Rate (CFR) in the United States has dropped a decimal point from 1.8% to 1.7% since 3 August 2021, the number of deaths in the United States is now averaging  707 cases for all of August thus far,  but since the 18th of August the USA has averaged 1,229 COVID-19 deaths per day. (Download if you wish, COVID-19 USA CSV database for August.) 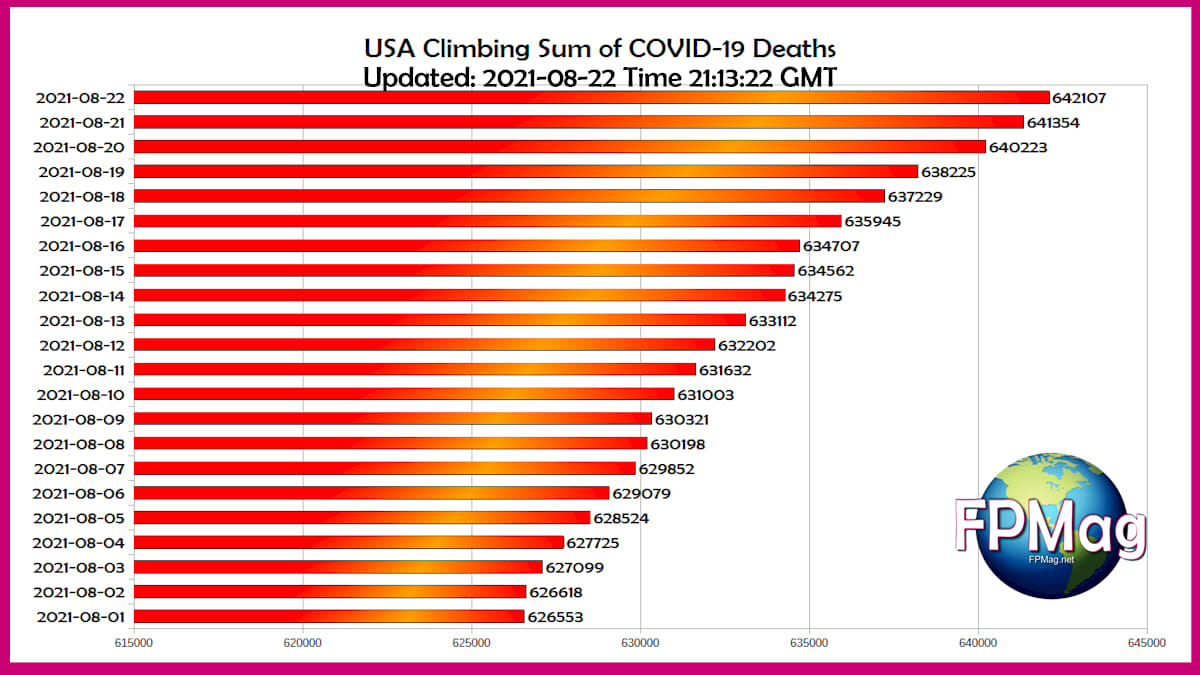 “This could be much worse, but if anything proves that vaccines work, it is the lowered CFR in the USA. This is a major achievement,” says the expert.

In order to avoid letting countries that refuse to report the sum of case recoveries, thus skewing global calculations, Burundi, Belarus, Belgium, Bosnia and Herzegovina, Britain, most provinces of Canada, Ecuador, FaeroeIslands, Falklands, Finland, France, French Polynesia, Hong Kong, Iceland, Mongolia, Laos, Netherlands, Norway, Peru, Portugal, Puerto Rico, Ukraine, South Korea, Tunisia, Sierra Leone, Sudan, Spain and Sweden 'recoveries' are estimated based on the current reported global recoveries as a percentage of all cases. (([reported recoveries]) divide (620,889,756 [Global Reported Sum of All Cases] less 34,257,654 [France Sum of Cases] less 1,003,778 [Ecuador Sum of Cases] less 13,412,263 [Spain Sum of Cases] less 8,422,336 [Netherlands Sum of Cases] less 2,583,370 [Sweden Sum of Cases] less 4,142,104 [Peru Sum of Cases])) = 97% a coefficient which is then adjusted according to the number of cases in the past 30 days and the new coefficient is applied to the sum of each of these nation's cumulative cases to estimate the missing recoveries data. In the case of France some additional hospital-sourced recovery data is factored.