Presidents who lie, Trump and Biden, but Biden could be better than that, says caregiver pro

At the same time, Biden’s first 100 days in office were full of exemplary achievement.

“I think there are three accomplishments that stand out so far: The ramped-up coronavirus vaccine distribution, the passage of the American Rescue Plan, and the return to the Paris Climate Agreement,”  John Frendreis, a political scientist at Loyola University in Chicago told Politifact. “These will stand the test of time.”

by Melissa Hemingway in Toronto and Behar Abbasi from Afghanistan

“Biden has a long history of lying — about himself, about his past and about events that never took place,” wrote Liz Peek for The Hill, in May 2020. 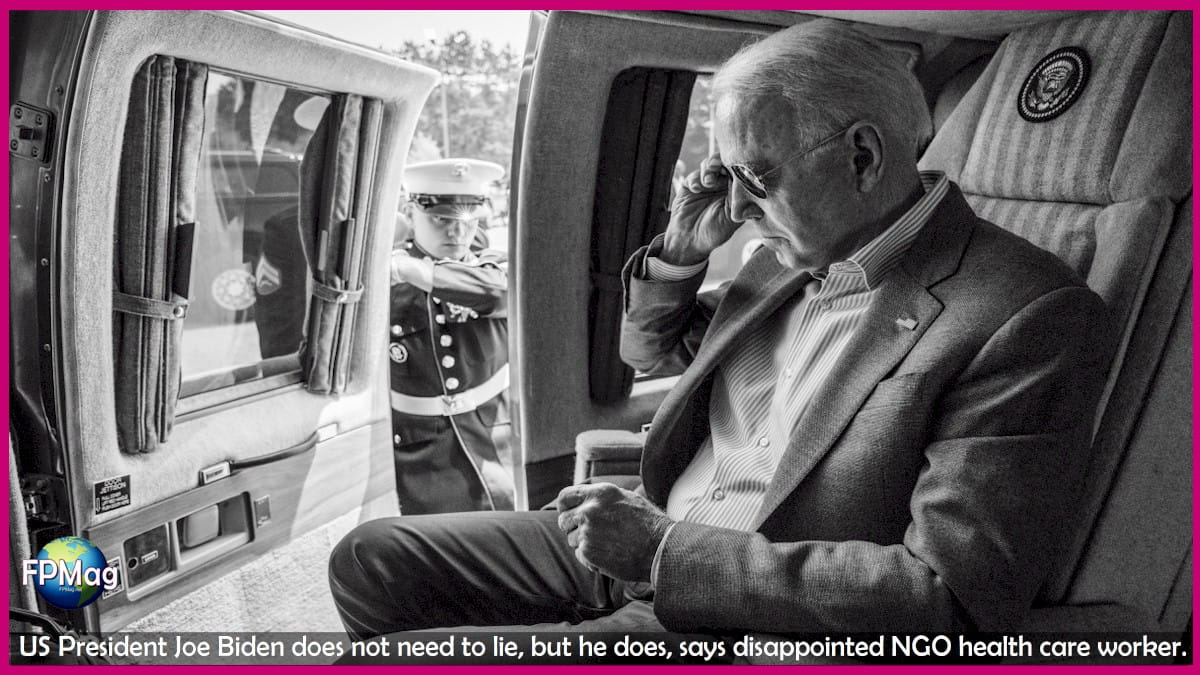 Some reporters have described Joe Biden, upon meeting him, as “hyper, glib and intellectually insecure”. As he is challenged by pointed questions of reporters, Biden will even stop his briefing departure and aggressively go after the reporter.

Joe Biden is more dedicated to evacuating himself from his own press conferences than evacuating stranded Americans from behind enemy lines!

FPMag has been told by several sources who likely should know, that from the outset, Barrack Obama did not want Joe Biden to seek the Democrat nomination and did not want Biden running for President. Did this have anything to do with Biden’s hair sniffing, space invasion and alleged indifference to the rights of women and girls to their own personal space?

Listening to Joe Biden, the salesman, one learns he is a boldfaced liar.

“If we leave one American behind, if we don’t get all those Afghans who stepped up to the plate to help us out, then Joe Biden, in my view, has committed a high crime and misdemeanor under the Constitution and should be impeached,” Senator Lindsey Graham of South Carolina said Friday on Fox News.

American lawmakers have protested Biden’s disingenuous narrative about withdrawing Americans from the fight in Afghanistan. The US role has been training and logistics for the Afghan forces which continued ‘the fight’ since 2014 according to Afghan soldiers in Kandahar.

US lawmakers, including Democrats and Republicans are telling reporters that they agree that America should leave Afghanistan but “do it gracefully, respecting the promises of safe evacuation made to Americans and those Afghanis who helped America” [paraphrased]. (Biden pretends it is about staying in Afghanistan but it is about how he left it…)

Joe Biden has allegedly been fibbing to the American public that he is pulling American soldiers out of the fight in Afghanistan. That fight ended in 2014 under Barrack Obama. Biden was the Vice President then, hence he does know the truth.

Three former Afghan soldiers, now resistance fighters in Kandahar, speaking to FPMag correspondent Gracie Edwards explained that the Afghan military of about 300,000 strong had been fighting the Taliban for years, taking heavy casualties and that the Americans’ role was training and some logistics support.

“It was better that way because the Americans never did learn and understand the way of the Taliban’s fighting tactics  and were not effective fighters,” said one former soldier.

Twenty-Nine-year-old senator-elect Joe Biden in December, 1972, learned that his wife Neilia and infant daughter Naomi were killed, his two child sons Hunter and Beau injured when his wife drove the Biden car into an intersection with significant traffic.

Mrs. Neilia Biden put the Biden vehicle into the path of a truck moving normally and safely through the intersection according to accident investigators. Truck driver Curtis Dunn was cleared of all blame in the event. Despite this, he took his grief over the accident to the grave in 1999. But his family suffered more.

“For many years, he [Biden] described the driver of the truck that struck and killed his first wife and their daughter in December 1972 as drunk, which he apparently was not. The tale could hardly be more tragic; why add in a baseless charge? The family of the truck driver has labored to correct the record, but Biden made the reference to drunkenness as recently as 2007, needlessly resurrecting a false and painful accusation,” wrote Mark Bowden in the Atlantic, October 2010 Edition.

“The truth is, it was a tragic accident. No alcohol was involved,” said Curtiss Dunn’s distressed daughter, Pam Hamill.

Delaware Judge Jerome Herlihy, who investigated the crash, supported Hamill’s account telling CBS News, “There was no indication that the truck driver had been drinking.”

Said Pam Hamill of her beloved father, Curtis Dunn, “He was a good, hard working man and wonderful father.”

Donald Trump, the quintessential conman left a trail of the broken

Calais Maine nurse, Monique Deslauriers,  shared this: “At no time has Donald Trump ever shown any empathy or any caring for the American people. Trump’s, 21 August 2021, rally in Alabama, drew a crowd bigger than New York City’s ill-fated rock concert. Everybody loves a conman, it seems. But this rally was held in the midst of a raging killer pandemic that I promise you [this rally] will cause many of my countrymen and countrywomen to become very, very sick and some will die. And Donald Trump, does not care, putting his own interests ahead of everyone else,” she said.

Gracie Edwards, a humanitarian health care worker in Kandahar says that Afghanis and NGO workers in Afghanistan are furious at Joe Biden for his lies and very grateful to the US military under General Milley for “raising the bar on what level of effort should be given to rescuing civilians in harm’s way”  (as my editor wrote last week).

NGO nurse Edwards’ message from a hellhole surrounded by ISIS, al Qaeda and  Taliban rapists and killers: “Joseph Biden has a lesson to learn: Stop the lying. You are better than this, so be a good grandpa president and stop the lies,” she said with her usual frankness and honesty. 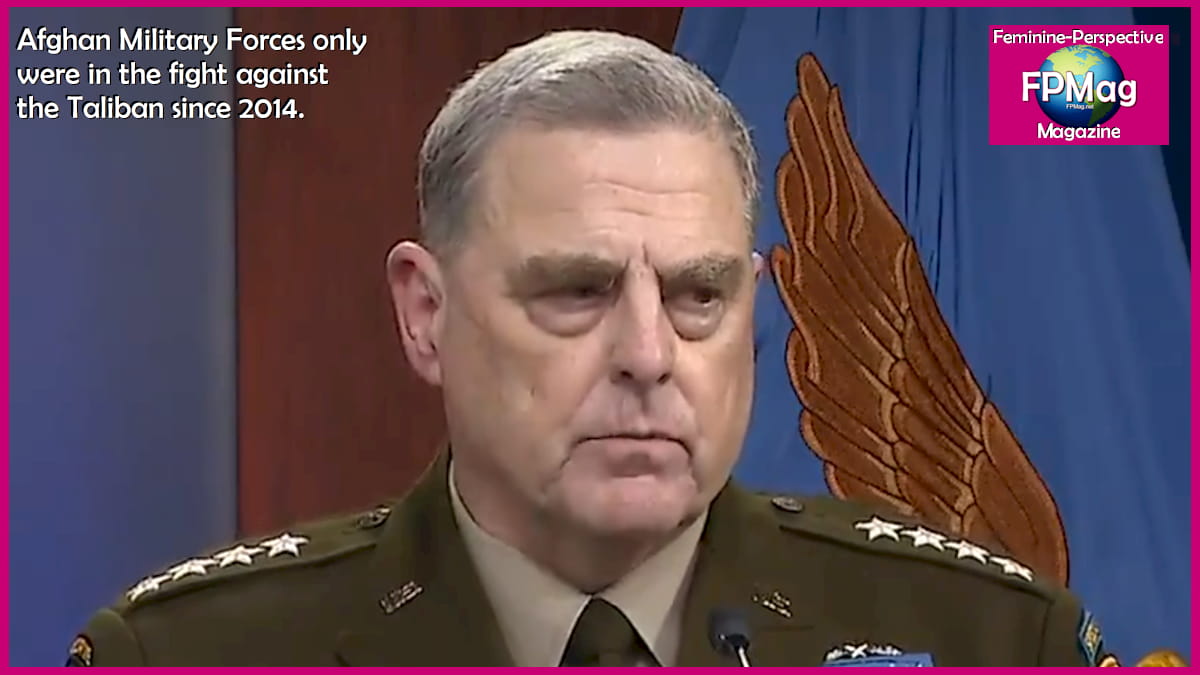 “Gen. Mark Milley’s planners, airmen and soldiers have raised the bar on what level of effort should be given to rescuing civilians in harm’s way according to widespread consensus.”  Few people will ever forget the crew of the first, August 2021, evacuation C-17 departing Kabul crammed with 600-plus souls aboard, despite weight-and-balance  regulations. All passengers were rescued safely. Hopefully the crew will be decorated because this is a way of thinking that goes above and beyond the call of duty.  Editor

Image: The American General Mark Alexander Milley, decorated United States Army officer and the 20th chairman of the Joint Chiefs of Staff. He must pull the Biden mess out of the fire of global condemnation. Sources on the ground in Kabul suggest that, “Milley may be the only person in Washington DC that the prospective evacuees can count on.”

The article " Presidents who lie, Trump and Biden, but Biden could be better than that, says caregiver pro " was written by Author: Melissa Hemingway (Biography, Email) Senior Staff Writer and Associate Editor at Large
Contact Melissa Hemingway on Twitter ~ Facebook ~ Find on YouTube