Rounding out the madness this past week, Joe Biden says there was no way to get out of Afghanistan without chaos. But everything America does in 2021 is rooted in chaos. That’s the new normal?  Chaos? Holy Chaos, Batman. ‘There had to be chaos,’ says Biden.

“It’s like the brilliant vaccination project that Joe Biden put together.  Chaos. It blew apart at the seams. President Biden was at first hitting all his targeted marks, but all it took was for the Trump blob to open its mouth and the lunatics fell out of the fringe and went to town on YouTube, Twitter, Facebook and Instagram claiming the vaccination syringes were implantation devices mandated by aliens to embed special magnets that would cause a spoon to stick to people’s arms or some such weirdness, (Watch the video below), every day brings more total chaos,” explains Michele Deslauriers, a nurse practitioner in Calais, Maine. “Now vaccines we are hording are expiring and going into the trash,” she added.

FPMag looks at America’s ghastly chaotic military evacuation from Afghanistan as the Taliban pretty much crowd the American military and Embassy into the airport and block everyone who needs to be evacuated from getting to the planes.

FPMag also looks at USA chaos in the COVID-19 pandemic mismanagement leaving the USA the number one hell spot for COVID-19.

The squabble leaving millions of Americans hating each other over mask wearing, not giving a flying damn about unvaccinated children under 12 is another chaos source. You must watch the video to believe the typical Yankee discourse over mask wearing. 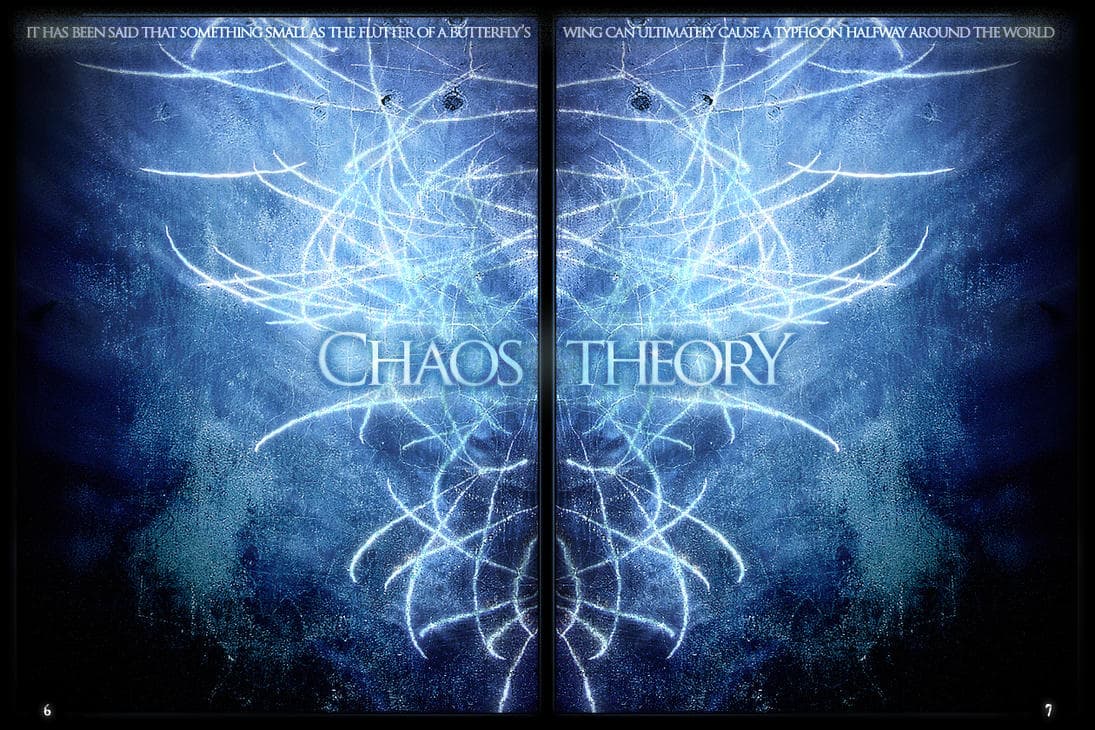 Chaos Theory:  “In mathematics, says the artist, “this theory describes the behavior of certain dynamical systems – that is, systems whose states evolve with time – that may exhibit dynamics that are highly sensitive to initial conditions (popularly referred to as the butterfly effect). As a result of this sensitivity, which manifests itself as an exponential growth of perturbations in the initial conditions, the behavior of chaotic systems appears to be random. This happens even though these systems are deterministic, meaning that their future dynamics are fully defined by their initial conditions, with no random elements involved. This behavior is known as ‘deterministic chaos’, or simply ‘chaos’.”
by
Hakapeci

“Listening to White House resident Joe Biden lately is making us all wonder what is really going on,” says Simon Baldock, an Israeli security analyst based in Tel Aviv.

Chris Wallace, one of the most professionally respected  journalists in America sums up the chaos situation this way:

“It’s been a mess… You can talk about the messaging problem and certainly that’s an issue. But it’s really, it’s a reality problem. The problem isn’t what had happened in terms of Biden’s speech. I mean, that was bad, his first speech, the buck stops here, but he pointed fingers. I think the interview with George Stephanopoulos went badly. The pictures over the weekend of him sitting by himself at a big table at Camp David while all of his aides are at the White House, all of it was a mess. But in the end, it’s those pictures on the other side of the screen from me, the fact that that, you know, we have this airport secured, but we have no way of getting Americans and our Afghan allies from downtown Kabul or elsewhere in Afghanistan to that airport. And as long as that remains the situation, the president can make any speech he wants, get any interview he wants, it isn’t going to make any difference. That’s what people are focusing on, that Americans and American allies are unable to get to the airport and get to that hope and freedom on one of those C-17s.”

“My sister is up there not far from base “Conoco” which is a ways up the Euphrates River. There are about a thousand troops there and it seems a certainty this information is solid because my sister is dating one of them,” he added with a laugh.

“They have pretty much always been there for years in that area. Maybe not always the same units but when I was up there working on the same security team Beverley is on, years ago, I knew them too. There was also another USA military base to the south keeping an eye on the flow of traffic from Iraq and Syria toward the Jordanian border. Then there was another bunch up in Manbij,” he said.

“But here’s the deal. The other day [19 August (ABC)], Biden told an ABC interviewer that there were no American military people in Syria (“ we don’t have military in Syria“). Yes there are more than a few. They are the ones Trump told to ‘take the Syrian oil ‘ away from Syria,” Mr. Baldock added.

STEPHANOPOULOS: “And you’re confident we’re gonna have that in Afghanistan?”

BIDEN: “Yeah. I’m confident we’re gonna have the overriding capability, yes. Look, George, it’s like asking me, you know, am I confident that people are gonna act even remotely rationally. Here’s the deal. The deal is the threat from Al Qaeda and their associate organizations is greater in other parts of the world to the United States than it is from Afghanistan.” Citing Biden Interview with George Stephanopoulos.

US President Joseph Biden continues to blowback on journalists who seem to, he thinks, disagree with him by asking the tough questions as al Qaeda, ISIS, and the Taliban, together or severally, depending on the locale in Afghanistan, party out the nights with kidnapped young girls they rape in Afghanistan.

“The chaotic narratives coming out of the White House every day now illustrates a totally different world than what we see here in the Middle East,” added Mr. Baldock.

“The pull-out from Afghanistan is the worst chaotic disaster the world has seen in the era of the video camera,” says the Israeli security analyst.

America has again climbed to the top of the world’s heap of the worst COVID-19 infected nations, inviting an already nasty variant to access millions of humans from which more ghastly variants of concern will possibly morph. 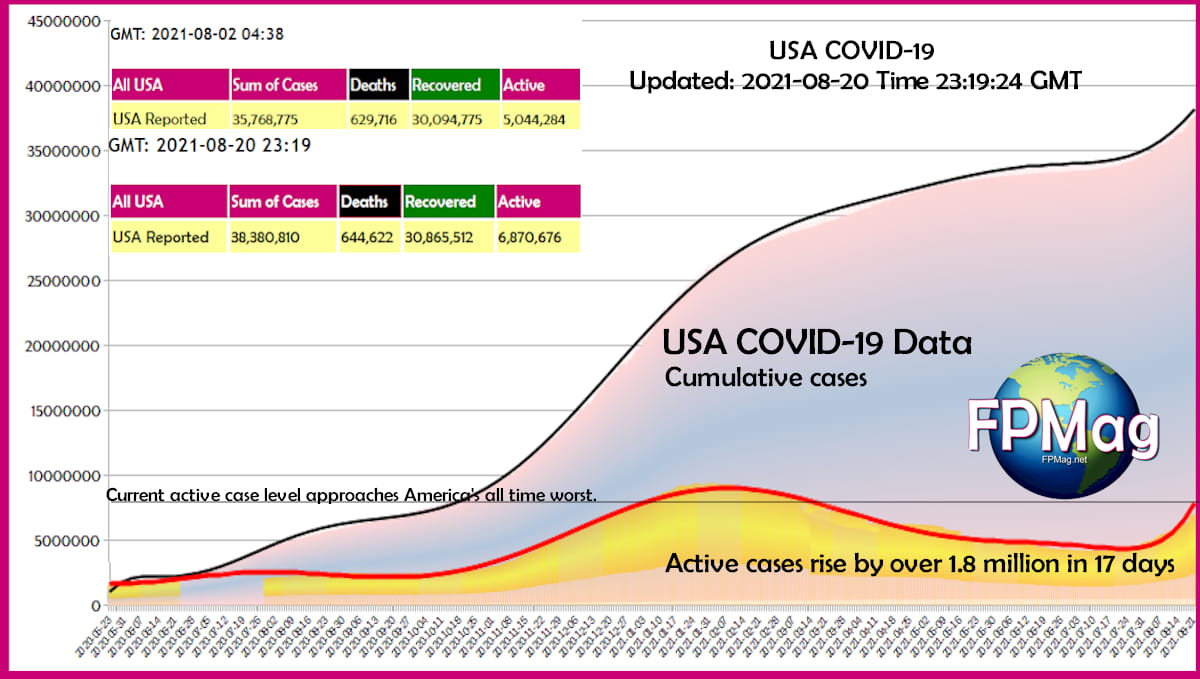 Chaos did this. Current active case level in America approaches America’s all time worst. Active cases climbed by over 1.8 million in 17 days. Source: Civil Society Partners in Solidarity against COVID-19.

Here are the reported and estimated United States data for 2022-07-01 EST.

“How can a nation get so bent out of shape over wearing a mask in the middle of a respiratory disease pandemic. What is there to debate? Doctors and nurses have been wearing masks for a hundred years to keep patient’s infections out of their lungs. What’s the mystery? How could any nation build such a cacophony of chaos over wearing a mask in front of a virus infection. Would they walk barefoot across broken glass? Same thing,” suggests NP Deslauriers.

“The recommendation that fully vaccinated people continue wearing masks is primarily intended to protect the unvaccinated – which includes kids under age 12 who are not yet eligible for vaccines in the U.S. The CDC further recommends masking in public for vaccinated people with unvaccinated household members, regardless of local community transmission rates,” writes Professor Peter Chin-Hong, of the University of California, San Francisco.